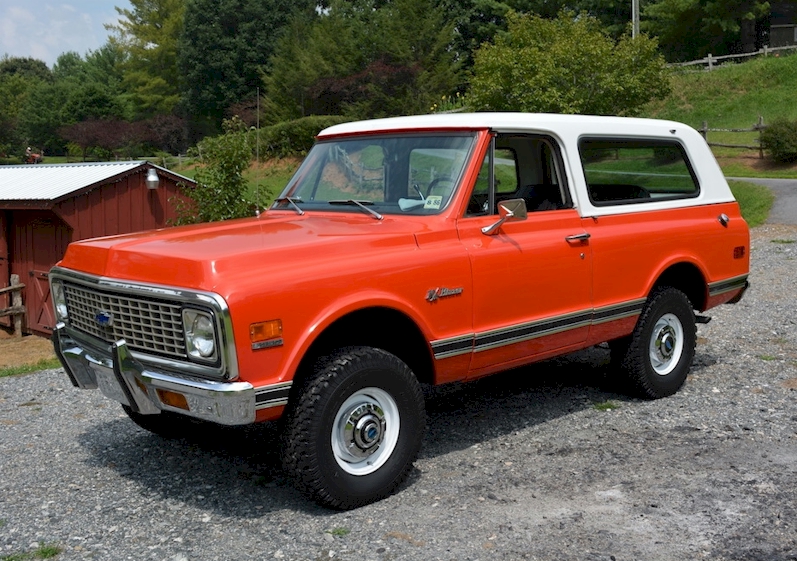 Every automobile manufacturer has a legendary vehicle it is incredibly proud of. Ford had the Bronco, Jeep had the CJ and even International Harvester had the Scout. What did the GM family have that they were especially proud of? Chevrolet had their successful line of pickup trucks and the Suburban but no real full size short wheel base SUV to compete with other offerings, that was about to change.

In 1969 Chevrolet introduced the first generation K5 Blazer, it was a representative of the renowned Chevrolet C/K family with the ultimate highlight of being the smallest full size SUV version. It was a response to the current spectrum of SUVs and, at the same time, a particularly unique development. Authenticity was achieved by means of the size. To be more precise, the rivals of the Blazer could not compare to the size of a pickup and the cost saving capacity the Blazer became so well-known and highly appreciated for. This combination contributed to a quick appearance on the market and allowed Chevrolet to compete with it's rivals with an SUV of their own. This short wheelbase truck lasted through 1991 when it was eventually replaced by the Chevrolet Tahoe. 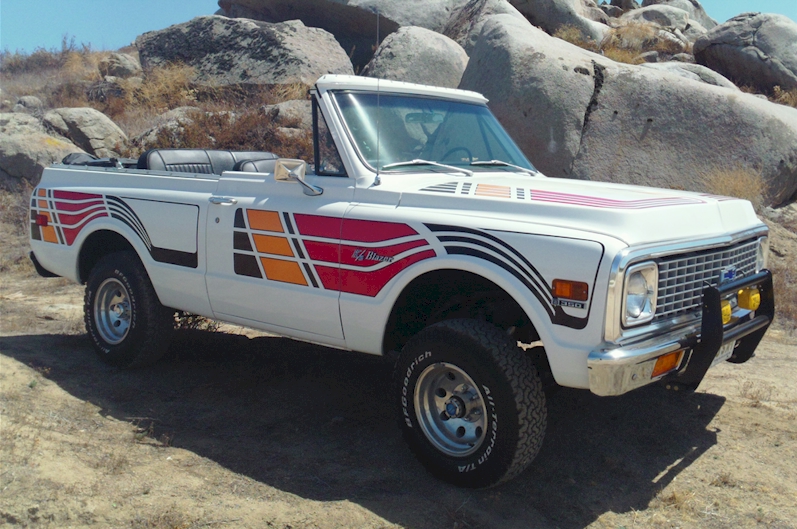 In 1970 GMC released its own version of the truck called the Jimmy which was also manufactured until 1991 when it was replaced by the GMC Yukon. Both the K5 Blazer and the Jimmy were produced with "full convertible" removable tops initially, and then in 1976, General Motors moved to a half-cab design. This version was presented as comparatively less prone to leaks and safer in a roll-over situation.

The K5 was originally available as 4-wheel drive only in 1969 and symbolized a certain type of revolution, both in the technology and the capacity of the vehicle in general. The two-wheel-drive model offered in 1970, had a better power plant diversity range, namely, four options for power plants: the 250 and 292 straight-6 as well as the 307 and 350 V8. Being designed as a direct competitor to the Bronco and the Scout, the Blazer presented the same class, level, and comfort with comparatively larger interior space at a lower cost. This was the innovation the Blazer brought to the niche making it very popular with buyers. The 2-wheel drive version utilized rear trailing arms with independent front suspension. The 4-wheel drive version was built with solid front and rear axles with leaf springs at all four corners. Each version had drum brakes front and rear through 1971, when the entire line of GM light trucks received front discs as standard equipment. 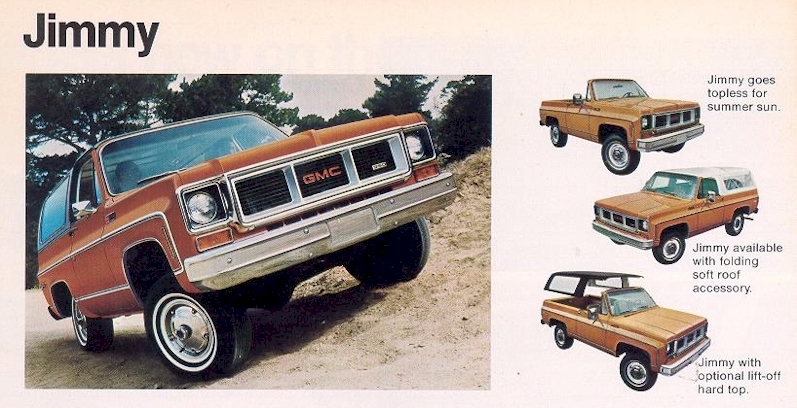 There was also a particularly important stage of the Blazer's development when it married the off-road capabilities of the Scout with "luxury" features such as an automatic transmission and air conditioning. Hence, the Blazer managed to outsell each of its rivals by 1970. Not only Ford, but also Jeep and Dodge would counter with versions of shortened pickups of their own by means of a Jeep Cherokee and Dodge Ramcharger. The Chevy SUV also appeared as a convertible in the market which was another stage of its innovation triumph.

In 1973 the Blazer along with the Jimmy received it's second generation redesign commonly referred to today as a squarebody. As was the case with the first generation, the majority of the vehicles manufactured were four-wheel drive Blazers. 1975 was the last year the legendary SUV had a full removable convertible top, as 1976 a half-cab design was employed for the next 16 years. 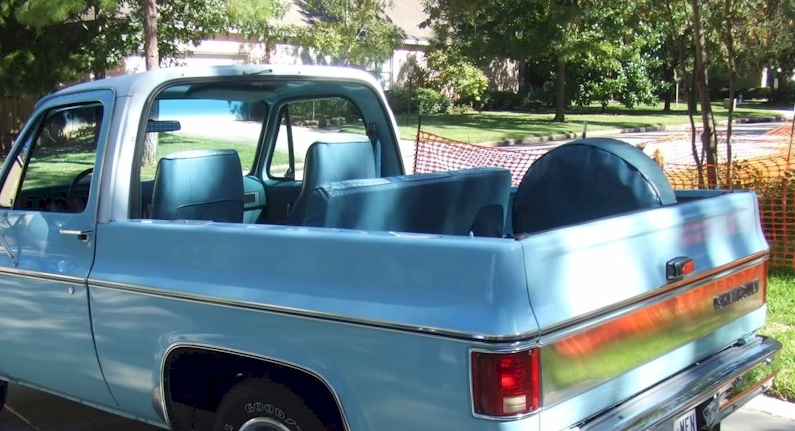 The second generation of Blazers united the tailgate and rear hatch glass. Due to this innovation, the glass panel could be retracted inside of the tailgate by means of a manual crank mounted on the tailgate. An electric motor option that was activated via a key-operated switch on the tailgate and a dash-mounted switch was a significant achievement, and the K5 became more and more refined. There were rumors and controversies around such innovations however. For instance, the rumored weight of the Blazer's large glass panel was regarded as a huge liability as the manual crank gears could be worn prematurely and the K5 electric motor was prone to recurrent overheating and consequent failure. One more feature of the Blazer tailgate that was questioned appeared to be the safety switch. To be more precise, it was connected to the electric motor aimed to prevent the rear window from being raised in case the tailgate was unlatched. In any case, all the aforementioned issues were triggers for the Blazer's further progress.

Starting in 1981, Chevrolet and GMC employed the smaller displacement 305s with a 9.2:1 compression ratio. Such engines managed to produce approximately the same torque as the 350, providing the vehicle with a similar driving feel. Nevertheless, such power plants appeared to be underpowered and even prone to detonation, especially in terms of the electronic spark control module. Hence, in order to achieve the same compression ratio, the cylinder head chambers were designed to be smaller.

A prototype Blazer model was introduced in 1976, it was employed as a testbed for a military CUCV vehicle that was developed by Vic Hickey, the renowned father of the HUMVEE. It finally saw production from 1983-1987 and was marked as the M1009 CUCV, or the production militarized version of the civilian Blazer. It was a different experience since the differences included a 6.2 Diesel powerplant the deficit of an air conditioning system, an extra leaf spring in the suspension as well as blackout headlights, a hybrid 12/24 V electrical system, a rifle rack, front mounted brush guard, and special painted patterns design specifically for this venture. 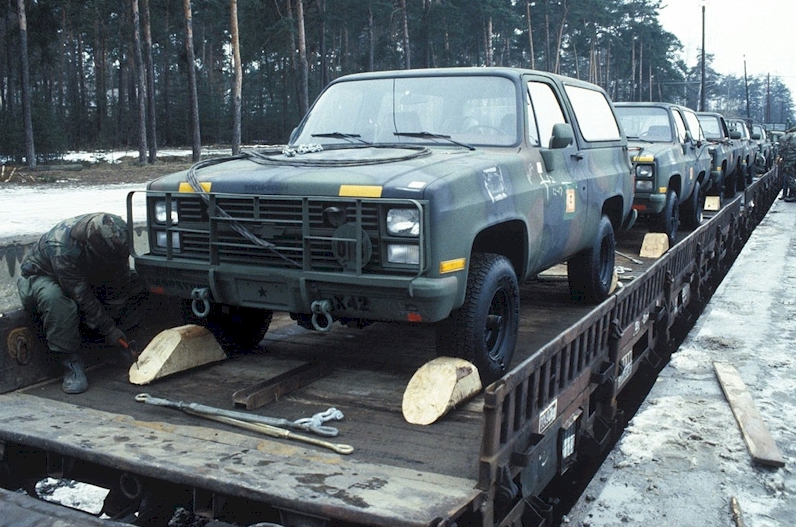 Throttle-body injection (fuel-injection) was introduced for the 1987 model year, and after that the 350 became the standard power plant. Furthermore, the conventional "C/K" designation was changed to "R" and "V" for 1987-1991 to prevent confusion with the GMT400-based Chevrolet C/K pickup trucks. The next year in 1988 a fixed mast antenna instead of the previously used windshield antenna and a trip odometer as a part of the gauge package cluster were also introduced. 1989 granted the Blazer with a new base as well as up-level grilles, body side moldings, new headlight bezels, and front bumper rub strips. One more innovation for 1989 was an all-new base coat/clear coat paint. 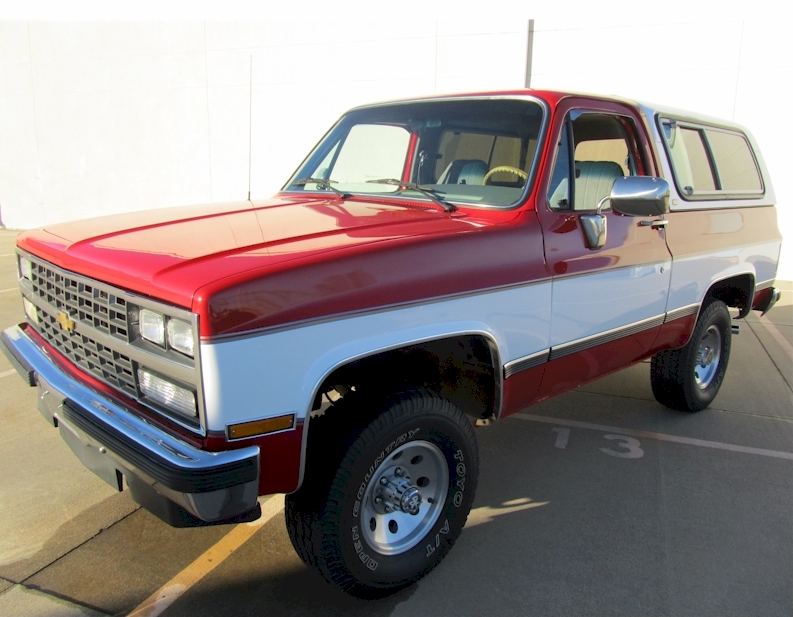 As for 1991, the title of 700R4 was changed to 4L60. The throttle body injection sy stem, or TBI, acquired considerably longer throttle shaft bearings as well as enhanced fuel mixture distribution and new throttle return springs. Novice heavy-duty intake valves were introduced in the 1991 version of this legendary rig as well as powdered metal camshaft sprockets.

Throughout its 23 year production run, the Chevrolet K5 Blazer would undergo numerous styling and creature comfort changes making it one of America's all-time favorite 4x4 utility trucks. And because of how popular they have become in recent years you may be asking yourself, what are K5 Blazers worth? According to the Hagerty valuation tool recent sales show a range between just over 6K to over 300K depending on variables such as condition, equipment, custom parts etc.

If you are an owner of one of these iconic vehicles or would like to be, you may be interested in repairing, restoring or modifying that classic first generation Blazer or squarebody Chevy... you owe it to yourself to take the CK5 forums for a spin.

Join the brotherhood of over 80,000 CK5'ers and register today! #LetsDoThis
+ JOIN