So back in December, I purchased a 2010 J**p Wrangler Rubicon. I honestly still hate most J**p owners and thing they are bland loyalist that need to be punched in the mouth. I honestly am almost fed up with all the J**p forums because half of them aren't wheelers and most don't believe in building parts yourself. I've just recently decided, I will no long buy parts I can build. $350 for a tie rod, when I can build one to the same design for $125. Its worth my time to practice my welding skills in order to learn a skill/trade to help with future work on other 4x4s and mine. I have butted heads alot of other forums because some people think to much in the box and then when you prove them wrong they get butthurt and still claim your wrong.

I seriously hate the jeep community, but this forum has always treated me great. People here tend to think out of the box and I feel like its not a big push by shops/venders to buy this or that product, but to get the parts you need. In other words I don't feel like there is as much politicking here as there is in other forums.

Anyway here's my build thread on my Rubicon. I bought it and it never had been taken off road. It has a warn 9500Ti winch and mopar bumpers. other than that it was bone stock. I have a feeling some doctor ordered it because he liked jeeps and then wanted a new model because it had 46k miles on it when I bought it. 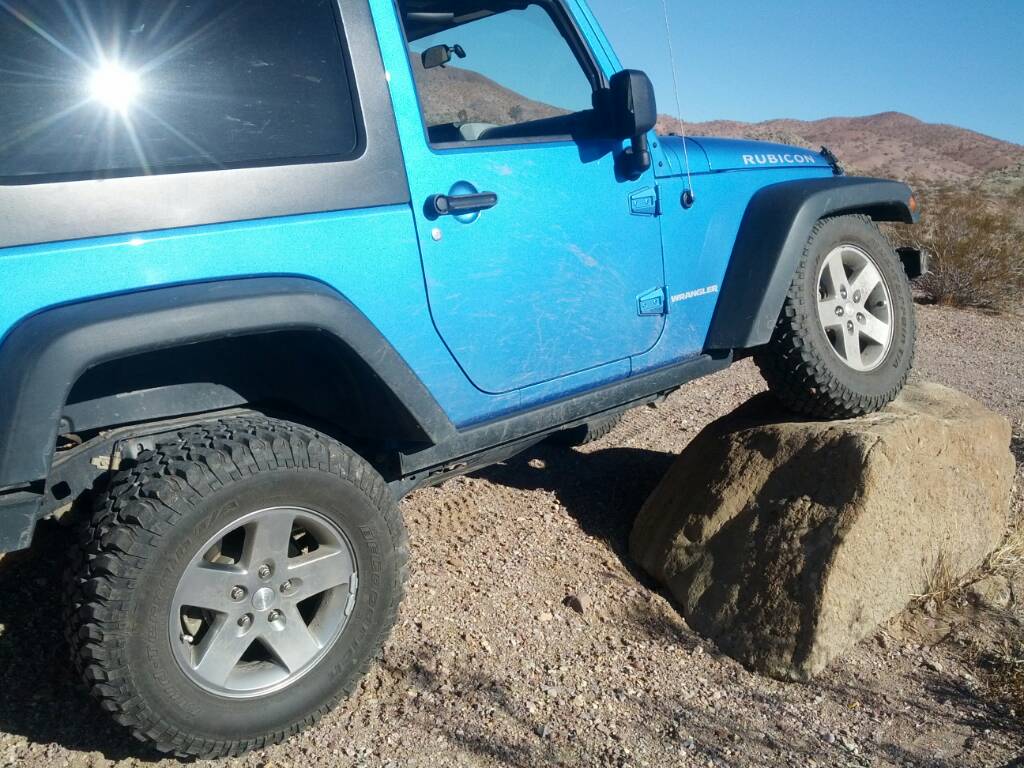 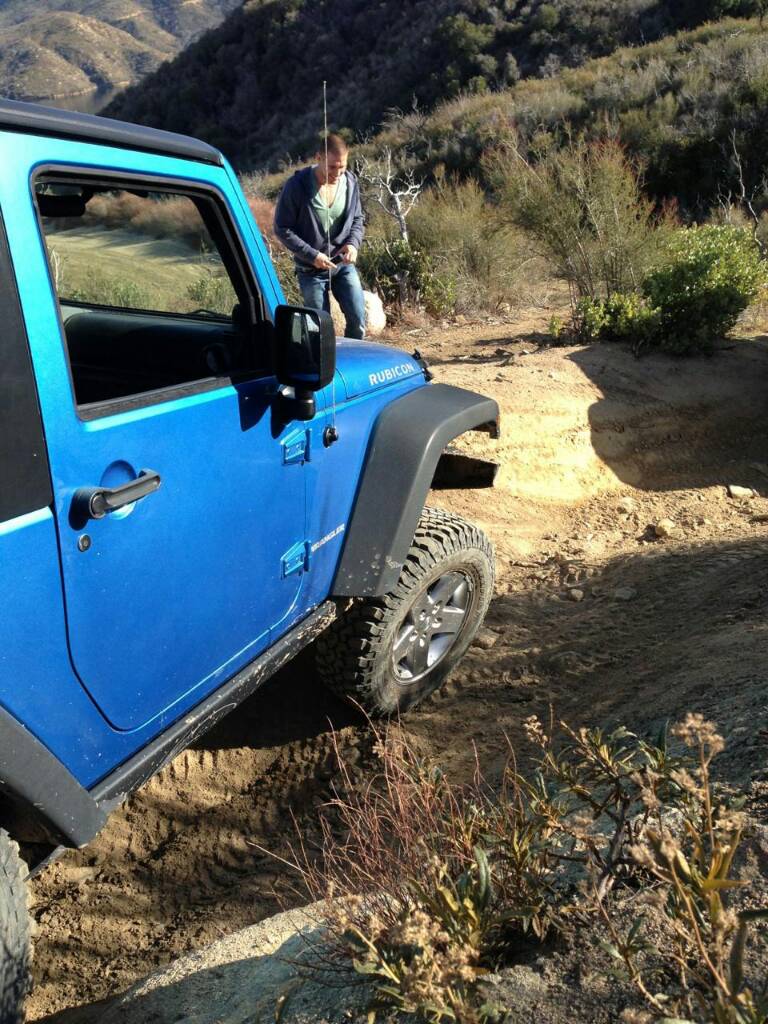 One of the first things I did was get a shoulder bolt and rotated the electric sway bar disconnect up and behind the crash bar on the frame up front. Then I added a Rock Krawler suspension coil spacer lift that leveled it out and lifted it 2", added sway bar disconnects, removed the rear sway bar. Soon after that I added some 4 door hard top springs, and some different shock mounts so I could run 12.5" travel shocks. I ran that set up till I decided on a 2.5" Rock Krawler lift, which is actually rated for a 4 door wrangler and jacked it up about 4". 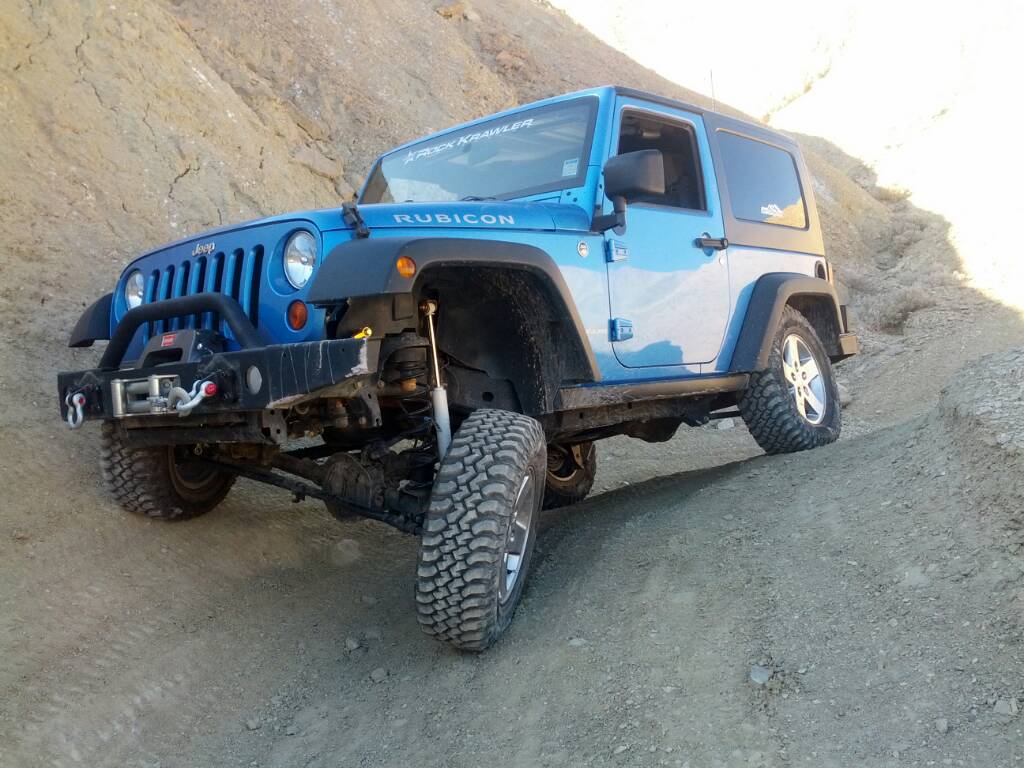 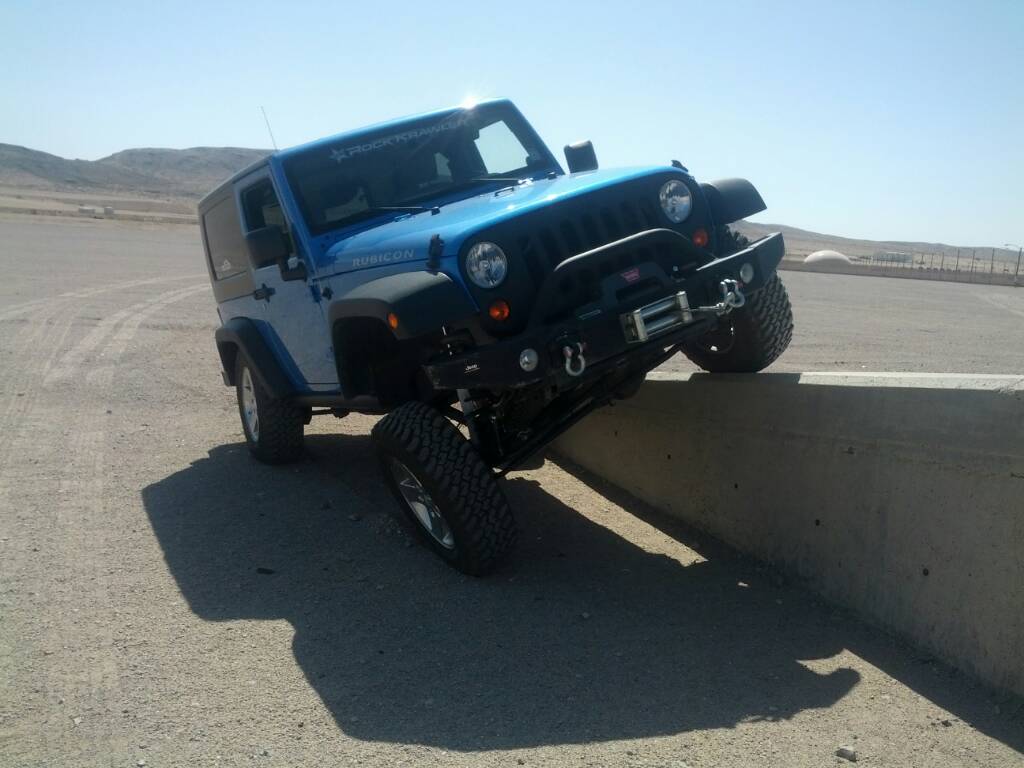 Lately I added some JCR rock sliders which were kind of a pain in the ass to install. Nutserts are the devil lol. I haven't put them to use yet but they are sold and I have used a high lift to jack up my whole jeep with them. 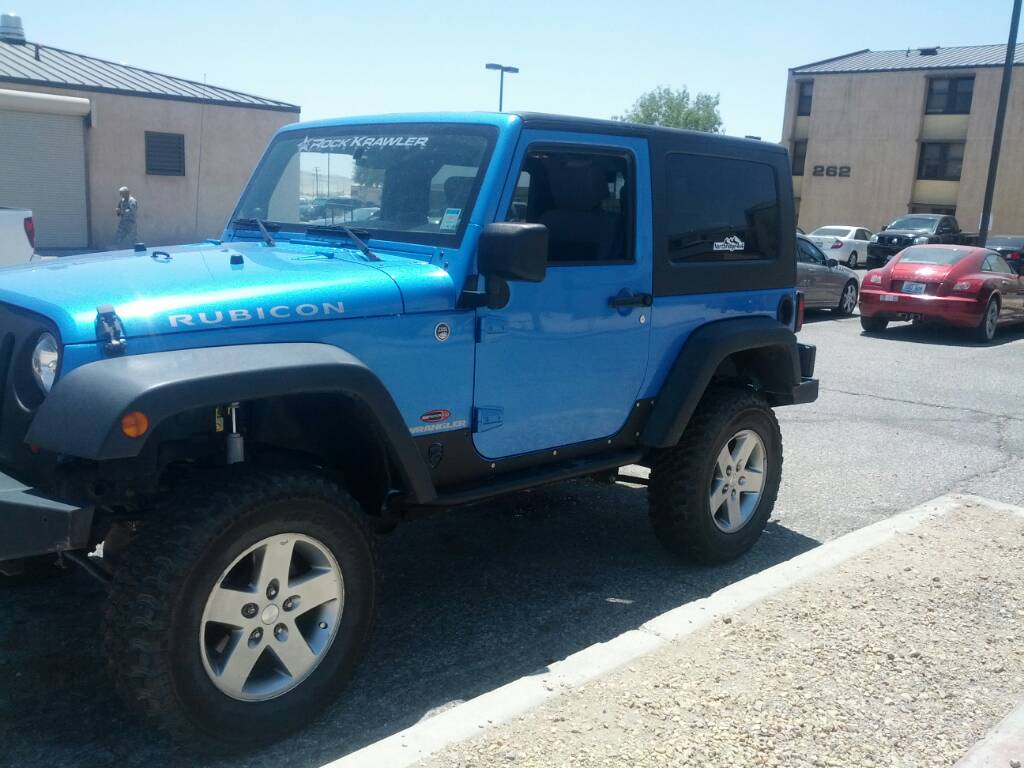 Here is a picture with the sliders

My most recent modification has been to build new shock mounts front and rear and gained about 3 inches of up travel. Before I was running 3" extended bump stops to keep my shocks from bottoming out, now I'm running 12.5" shocks on factory bump stops. 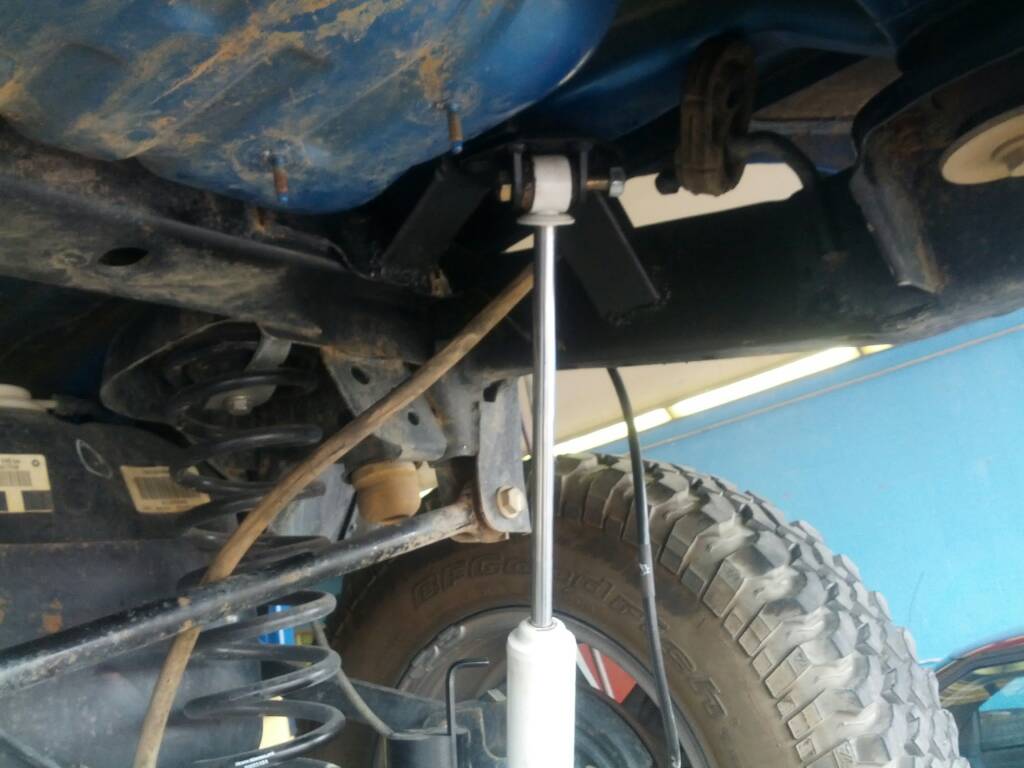 Front crude but effective shock mounts, I plan on redoing them at some point. 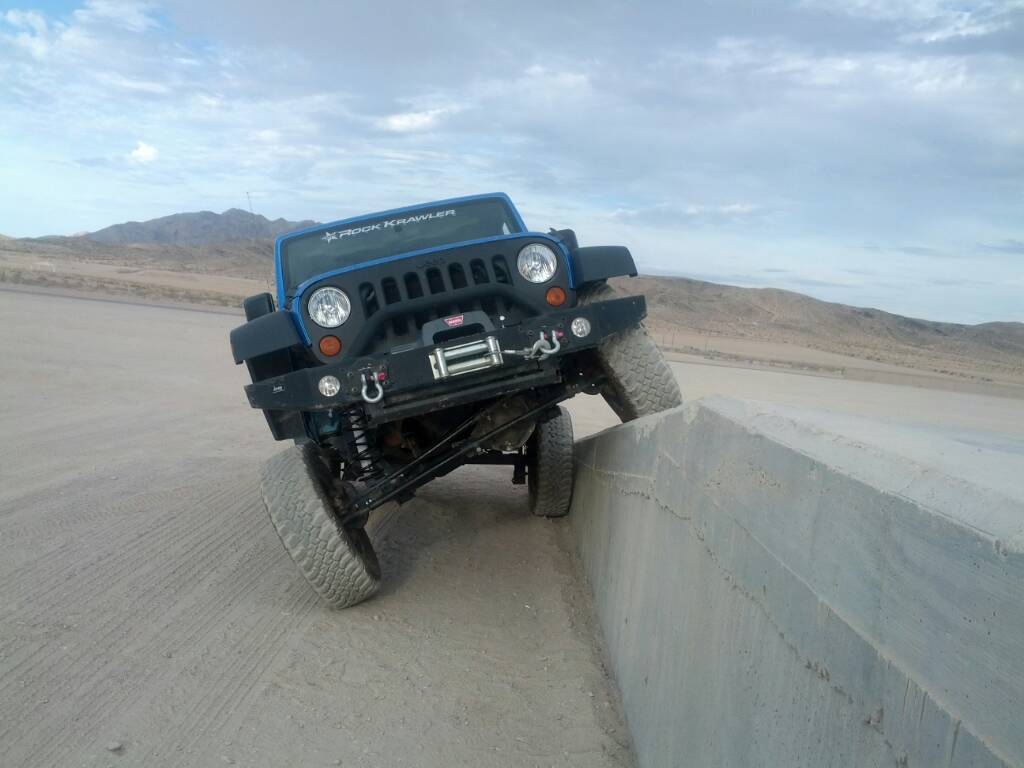 After I relocated the shock mounts.

I have gathered the material to build an engine/transmission skidplate, I need need to buy the 10 ga. I will be using to build rear quarter panel armor, and also tubing and what not to relocate my exhaust crossover pipe to behind the transmission cross over to allow more droop. I will hopefully be buying some 3.5" metal cloak springs to keep them from unseating and also to alow the rear axle to droop more. I really wish I had used their springs in the beginning instead of the this still riding Rock Krawler ones.
Share:
Facebook Twitter Reddit Pinterest Tumblr WhatsApp Email Share Link 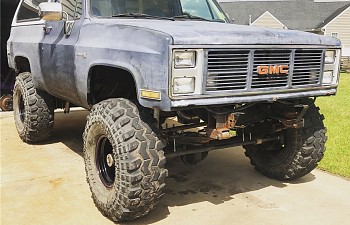 Well since I got laid off I have found the time to work on the K5 again. Main problems are cracked radiator tank, blown heater core, torque converter went out, and the rear gov-bomb id its thing. I just popped open the diff cover and was like d@mn. The driveside side gear (that so doesn't look like correct grammer) is completely chewed up and both the gears on the crosspin have small chunks missing. But it kinda buttonhooked me. I've thought about buying a 4 spd parts truck preferably 4wd...