A year ago, I was driving by a used car dealership in my town and saw a mid-80's crew cab K30 sitting in the back of the lot. I drove by it everyday for a couple months to and from work and finally one day decided to stop by and look at it. Turns out it was actually owned by one of the service tech's at this small dealership and wasn't officially for sale through the dealership. But after talking with the owner of it for a while, he said he was going to list it for sale soon anyways as he didn't have any time or energy to get it fixed up. It did run, but poorly and the body was pretty rough with a few dents in the doors and fenders, and the bed was pretty hashed and almost falling off. I offered him $1500 for it, and he said sure. I even drove it home the 5 miles back to my house. My wife gave me a very stern look when I drove up to my place with that truck, hahahaha.

So my original plan was really for this just to be a parts truck as I have my V3500 tow rig that I could have used lots of parts off this to keep around, and my brother has a few square body truck projects he wanted some parts off it for, and I was thinking I could sell quite a few parts off and probably make my money back on it. So for the first about 4 months all I did was start stripping the thing down and selling off a handful of items.....buuuutttttt, then I just couldn't help myself. I looked at this truck and thought it would be shame to let a crew cab square body truck just go by the wayside and eventually end at the crusher, and I thought this thing was a perfect candidate to make into some sort of off-road vehicle as it already had some dents and stuff in it, so I wouldn't feel as bad about cutting it up some. However I knew I could make it into something freaking cool and give it a second life, as it were.

So I had an idea in mind for it, some things have shifted in the build over the last year, and I'm not done yet, but I figured I'd post up where I'm at so far with as many pics as I have on my phone. Not all of this is all inclusive since my phone went nuts a few months ago and I lost all my pics on my phone, but this will give you an idea as to where I'm at. 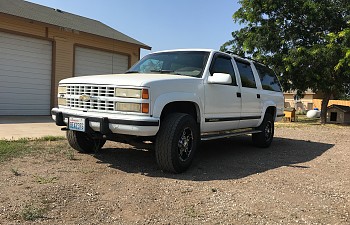 Today I did a thing

This thread is going to start off very slow but hopefully pick up steam in the next 6 months or so. I have liked the ideas of build threads to catalog what I do to rigs and also maybe give other people ideas on their own stuff. So here we go.... Right now I currently have a 1996 K2500 extended cab pickup with the L29 7.4 liter Vortec 454, 4l80e, 14bff rear with 4.10 gears. Literally it is bone stock. I have been using it as a tow rig for my K5 for the last couple of years. It doesn't...