I got interested in purchasing something with 4WD after moving to Colorado and falling in love with snowboarding. I've always had an appreciation for older vehicles and loved the idea of buying something that needed work and doing it myself. I was already doing maintenance jobs on my first vehicle (1996 Mitsubishi 3000GT), and was proud of the money I had saved and the knowledge that had come with those experiences.

At first, I was considering a lot of things: Tacoma / 4Runner / Land Cruiser, XJ, even a few vans. Then, I got to talking with my brother in-law. He has a 70-something K5 that has been a project of his for a long, long time. He turned me onto the K5, Bronco, and Ramcharger. Initially I was hesitant to copy him, so I focused on the Bronco and Ramcharger for a while. But as time went on, I couldn't get over the look of the later K5 models. In my humble opinion, they're one of the best looking vehicles ever. Before I knew it I was out chasing down Craigslist ads and driving Blazers all over the Denver metro area. I finally found my truck on a farm outside of town in Elizabeth, CO.

The truck is a mostly stock 1989 (350TBI / 700R4 / NP241) that was worked on by a grandfather and his grandson over the course of 4 years. The idea was that they would work on it together out in the grandfather's barn, and when the time came the grandson would have it as his first vehicle. They rebuilt the engine, patched the floors, put in all new interior, swapped out most of the old fluids, etc. Unfortunately for the grandfather, the grandson's parents were not particularly excited about the K5 being their son's first vehicle. So, the grandfather was selling it and giving the money to the grandson instead. It was a tough conversation to have because the grandfather was clearly sad that their project wouldn't be the kid's first truck. When buying it I did everything I could to ensure him that I'd take great care of it and (hopefully) own it for life.

I am, without a doubt, one of the least experienced members here on CK5. So, most of the updates on this thread will be silly noob questions and run-of-the-mill maintenance updates. Jobs I have tackled pre-build thread are things like greasing zerks, bleeding brake lines, changing the transmission fluid and filter, and resealing the camper shell. In fact, the only add-on that I've installed is an ORD steering box brace. So, you probably get the idea. But it will be nice to have a trail of history that I can look back on... and it will be nice to keep my dumb questions out of The Garage.

The only plans for the truck are to catch up on all maintenance items, soften up the ride a bit, and take it wheeling in the summer. I have a feeling that the more I wheel it, the more I'm going to want to change. So it goes, I guess. 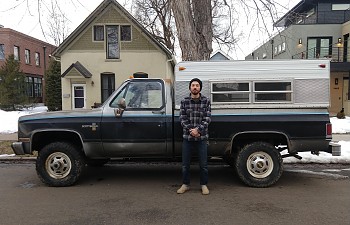 Get 'er cleaned up and solid.