Hello all...
In my third year of this restoration buildup. I've purchased one of the Us Body source FiberGlass tubs and Tilt front clips.
Man, what a lot of work. You have to drill, cut, every hole in the body. Everythings a day or two or three chore. Taillights, 1 day, Headlights 1day, Doors - 1day per door, tailgate - 3days.....anyhow...I was wondering if anyone else has done one of these.
Specifically, I'm very concerned with the roll cage mounting. Obviously it had to go to the frame, but the question is, how?
I started with a smittybilt cab cage and added rear hoops and some crossmembers. I custom designed and welded brakets from the frame to the bottom of the floor. Theres a large rubber bushing (really large...I got the bushings from a Freightliner parts place, a certain OTR truck uses two of them to hold the steering gear box) incorporated within. Then I bolted the cage to those points...(6 of them). I used different size plates top and bottom of the floor to avoid the cookie cutter effect. The body is additionaly mounted using the stock (ok some modification there as well) points (8 of them). I'm concerned that all this will make the body too rigid and the fiberglass will end up cracking to pieces in no time from the cage points flexing at a different rate than the body mount points....any expieriece here would be apperciated.
The only other choice was to cut large holes in the floor and send the tube steel though the holes to the frame. No plates. The holes would then have to be large enough to accomodate for flexing of the body..and use makeshift boots to cover it.
The floor is fully reinforced with 2x4, 4x4, and 1x2 wood (I wish they would have used aluminum there...perhaps that would have been to rigid...hopefully it was treated wood...but probably not...oh well, hope they sprayed that glass troughly enough to seal in the wood completely).
I'm also in dilemma about how to mount the seats. Do I spend several days and weeks of spare time bending and welding in a sub-cage to mount the seats to, or just bolt the seats to the floor using some plate steel to spead out the load. The front ones are right over one of the 4x4's underneath.... I really don't want the subcage as it would make it even more difficult to access the reat seat....but if it's nessecary..The guys at Us Body I think are a little over confident as they say I don't even need to spread the load, just bolt the seats right in...they also say the cage should be fine how it is, but...as I stated, I get the feeling they think thier bodies are indestructable....
They said they sell about 4-8 of those bodies a year, hopefully somehere has been one of those people...

My goal was to make a daily driver, and decent wheelin' vehicle in one, and to never have to worry about rust again (I live in Michigan, and it would have killed me to go buy another 73-75 blazer tub that wasn't rusted, bring it here watch it turn to nothing inside of a year or two). I want the outside and inside of the truck to look basically stock, except for the modestly increased tire size. The truck has 35's on it, (only 1 1/2" of spring lift on no fender trimming!! amazing what 1200# weight savings will do..) 14 bolt rear w/detroit locker, dana 44 (converted to 3/4 ton eight lug knuckles) with ARB Air locker. Imron painted frame, axles, trans, transfer case. SM465 Trans, NP205 transfer case....'91 interior... and No motor yet! (Plan on a GM Crate 383 stroker)


Any insight into these issues would be greatly appreciated. 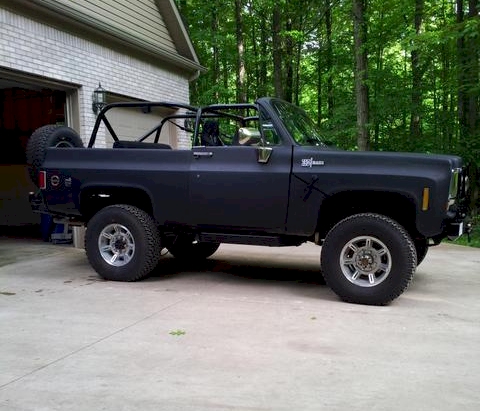