Finally got back into a K5. After parting out my 87 a few years ago, then selling my 86 K10 a while back to buy something else, and not wanting to stick any time/effort into my current 85 K20.

I've been keeping an eye out for a clean/solid somewhat rust free (rust belt people know what I'm talking about) K5 for a DD/wheeler. About a week ago I saw an add on craigslist for a 74 K5. Talked to the guy on the phone, he said he wouldn't be home till late and didn't plan on pulling it out of the woods till the next morning when the ground was still hard but I was more than welcome to and look at it. My friend and I head out there when I get out of work. From a distance it looked ok, body was fairly rusty and the roll cage was poking through the floor. His add said it needed the frame fixed where the steering box mounted. I'm thinking no big deal, common problem with these trucks might even be able to use that to drive the price down. I get around to that side and look, it was held to the frame with some wire and zip ties and had a hole the size of my fist in the frame. About this time the guys roommate came out and said someone had just come bought it for $850 (asking $1200) I said good...he can have the rusty pile. A little bummed out we headed back home. Being somewhat close to another friends uncles house we thought we'd give him a call being he usually has a good inventory of square chevys. He didn't have anything but led us to a guy (Brian) with this 76.

Start taking to Brian, it was his stepsons and he was selling it for him. Looked it over and it was very solid, very little rust for the year. Good floors, rockers, tail pan, tail gate. Had 3/4 ton axles already and a set of 38's. Looks like 8" (judging by the front springs and rear springs/blocks) of suspension plus 3" of body lift. No motor but came with a Th350 with 203 case adapter plus a 465/205 but no clutch pedals. Not that it was high on my list...but a good, non cracked dash pad (wood grain trim even, lol) with some sweet 70's upholstery on the seats. Asking price was 2k, I countered with $1500 settled for $1800. A little more than I would have liked to spend, but it was a clean tub and had a decent start on a build already.


Here it is loaded on the trailer. 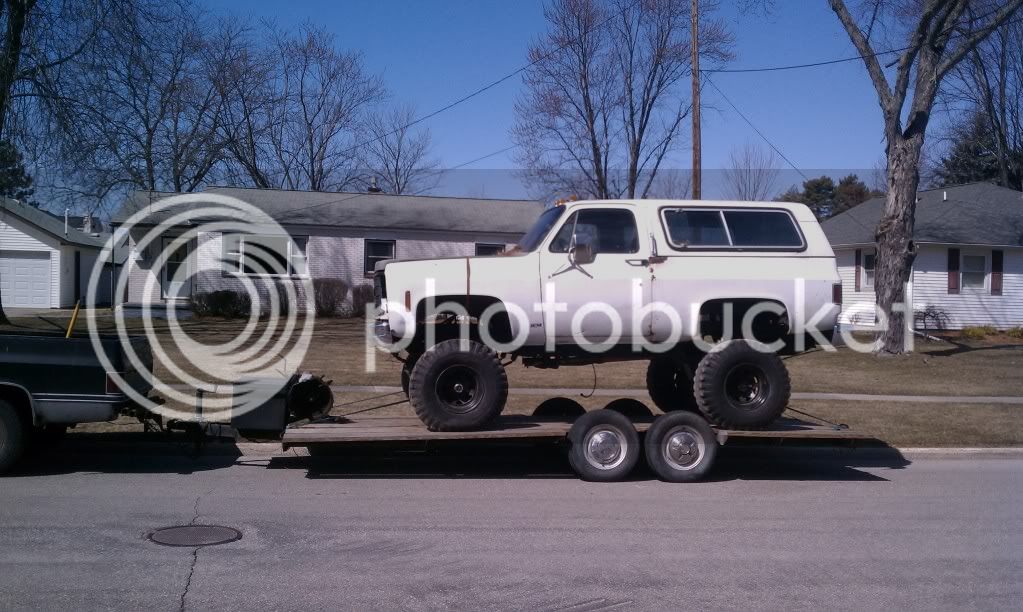 More pics and plans in the next post....dog is bothering me to go for a walk. 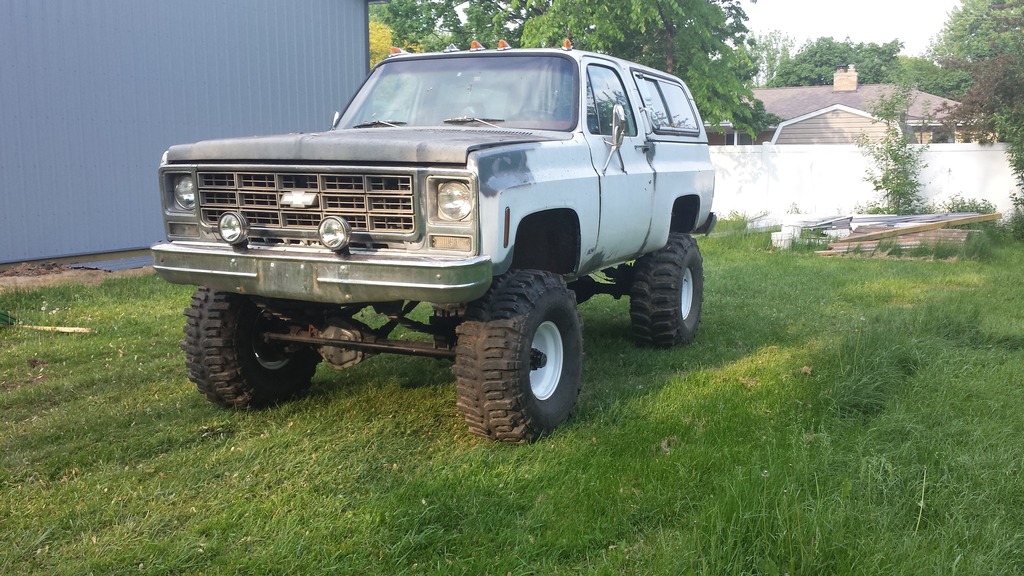 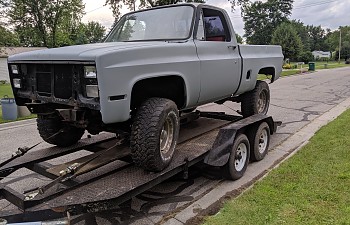 Finally have enough motivation to start a build on this one. Actual work started on this a little while ago. Wasn't looking for another project, but this deal fell into my lap and it was too good to pass up. Name comes from the guy I got it from. I've know him for about 18 years. He's always stuttered and had trouble speaking. My name always came out Orion (real name is Ryan)...and it's a badass Metallica song. Truck is an 86 K10 short box. 350/350/203. 10/12bolts. But none of that is going...

Starting a new thread for this 1970 GMC Jimmy I just picked up. I won't be doing a complete restoration, but instead rebuilding it into a nice driver. Something to hop in on nice days and go for a cruise. I'm going to be doing a lot (and I mean A LOT!) of metal replacement. Truck needs floors, rockers, rocker boxes, floor supports, A and B pillars and quarter work. I did get some patch panels and a good chunk of a donor cab to fix the "4 hole" area, along with what looks to be a cut down...

I guess you could call this a build thread. Mainly going to try to use it to keep track of my progress/notes/bounce ideas around. I've been using my K5 as a bogger in the local bogs, and while it works great it has some downfalls. It's heavy (for a comp rig) and the manual transmission isn't doing it any favors. The motor that I run for the bogs is all top end, not good for daily use/trails (which is why I swapped it out for the Bundy Hill run). A couple months back I picked up an 86 K10...

Have had the idea/itch to build a comfortable daily driver/do all truck for quite sometime. Something the wife isn't afraid to get in and go on a road trip. My K5 has become too much to daily drive, and the body is too nice to subject to the salt on the roads. I missed having the versatility of an open box truck and wanted that back as well. Having had all 3 wheel bases over the years I knew I wanted a short bed truck. I have been collecting parts for this for the past couple months, still...