In 1999, I wrecked my Granada. The next morning, I'm sitting at my dad's house crying about how stupid I was (Dad agreed, I knew that road and knew I was driving too fast). I'm thinking about having something to drive so I can make it to work the next day, I says "Hey, you just got a Bronco for a driving-around rig.. what are you doing with the Jimmy?"

Well, he's gonna sell it. So I think a few minutes, and offer him $750 down and $250/month until I make $2000 - the Jimmy has less than 12,000 miles on a rebuilt 350, and is damn near immaculate, so it's worth it. Pops agrees, walks to his bedroom and comes back with the title. He signs it and hands it to me, tells me that since the first words out of my mouth was to take responsibility and offer to buy it, I can just have it instead.

I rally around in that gorgeous old pig for a few years, before fuel economy and wanderlust bite me - I buy a Chevy Tracker, and hand the keys and title back to my father. I skip state shortly thereafter, and my father ends up selling (for $2500!) to my brother, a notorious duckhead.

Fast forward a few years, a few beers, and far too much chasing tail. My father's passed, as has my mother. I'm attending a family barbecue, trying to reestablish contact with the one sibling I actually consider a person (my brother as mentioned, is a duckhead. The other brother is a sales executive. The other sister was mom's favorite - she's never had to buy a car or house in her life, and is a useless shag rug toilet seat cover of a woman).

My duckhead brother is there. I've got room for another truck in my life, so I ask him about the Jimmy. He turned it into a plow truck (good choice), and got rid of it when he broke it in half (a thousand pounds of steel behind the front seats for traction?!?).

In June, 2022 I get home from a four day trip to the indian reservation for work. I'm wiped out exhausted, planes were messed up and I haven't slept for more than 2 hours in the last four days and haven't slept at all in the last two. I land in Anchorage and as soon as I turn off airplane mode, my phone blows up. I've got somewhere around eleven thousand text messages from my bud, he's found a plow truck and needs me to pick him up in three hours to get it.

Sure. I slam a pot of coffee and throw an energy drink in the truck and head over. I get him, we drive to dude's place. It's a free Blazer with a Sno-Way mount on it, a 1979 that showed up on facebook marketplace that morning while he was poopin'. OK. I back my truck up to the blue-and white blazer to strap up (we're gonna flat tow it about a mile to a friend's house). I get out of my truck and my duckhead brother's standing there like a turd on a frog. I look again. It's not a 1979 Blazer. It's a 1979 Jimmy. And it's not _a_ 1979 Jimmy. It's mine.

got the truck with the 7" wide snows I LEFT ON IT IN 2002 on it, dry rotted and horrible. The 10.5" Chaparral 31s I left in it were all in it - on the stock Rally wheels, which is cool. The beauty rings I'm 99% certain I had on it were missing. The cancer is real, right now I'm hunting panels on all four corners.

To add insult to injury, the duckhead lost the title, and won't go to the DMV to get a copy. 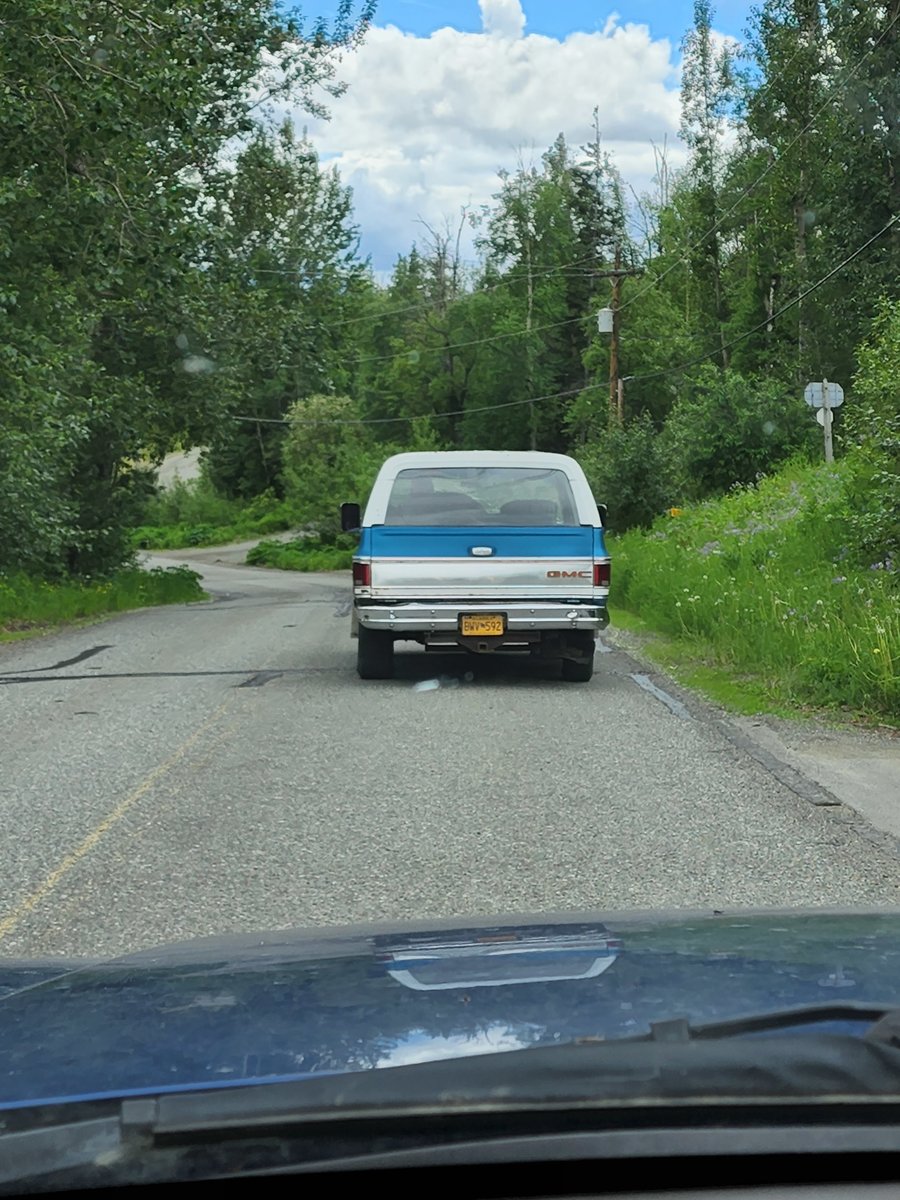 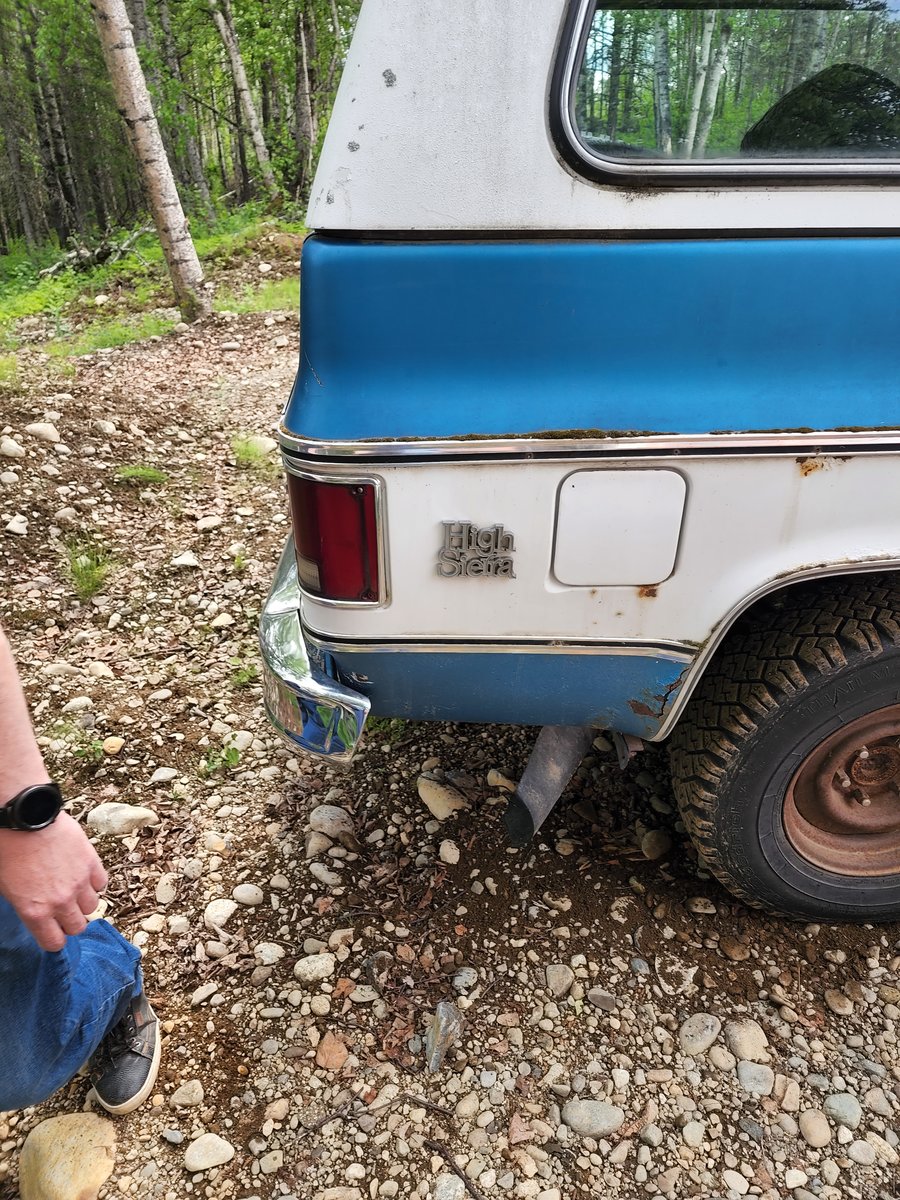 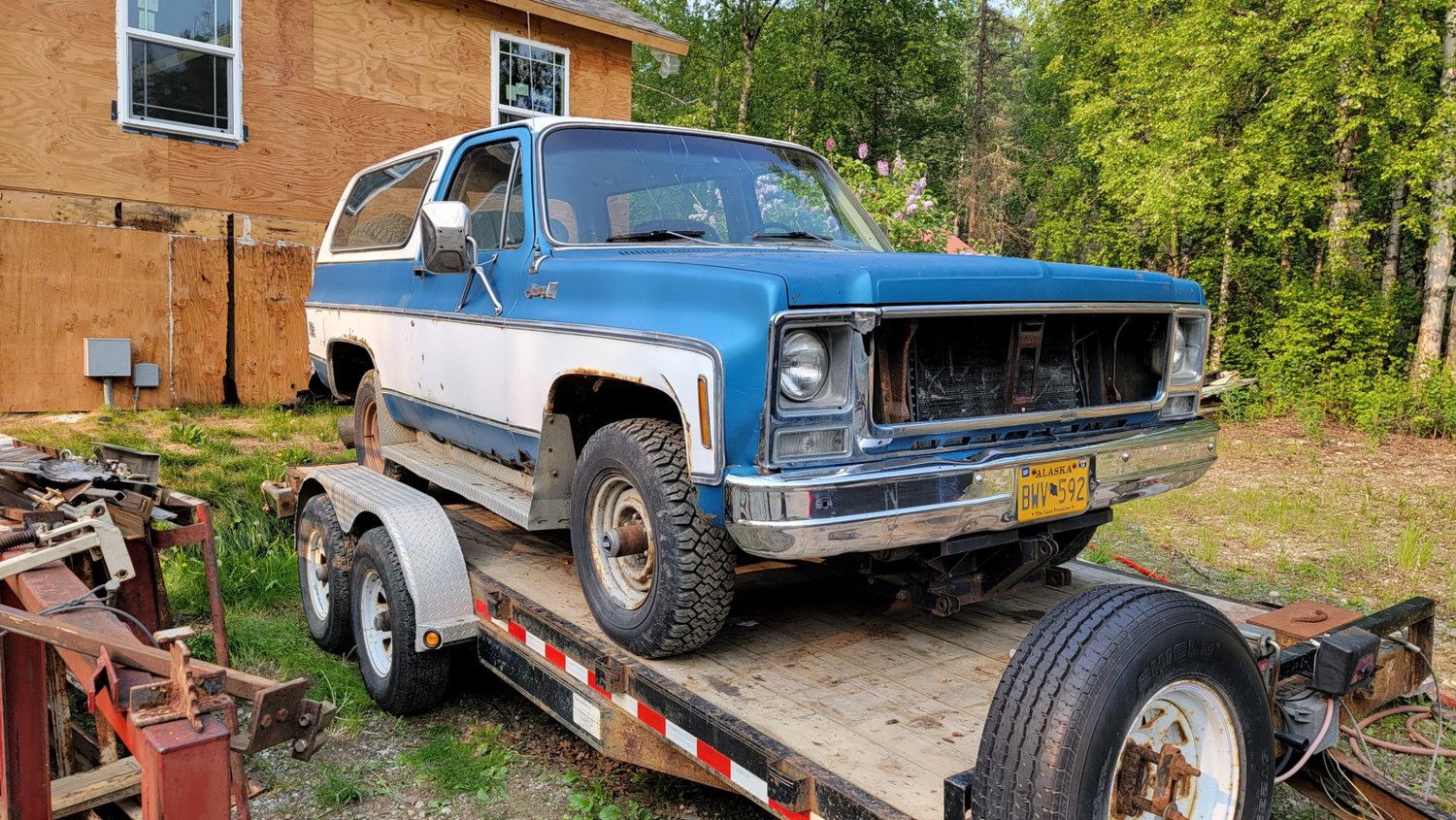 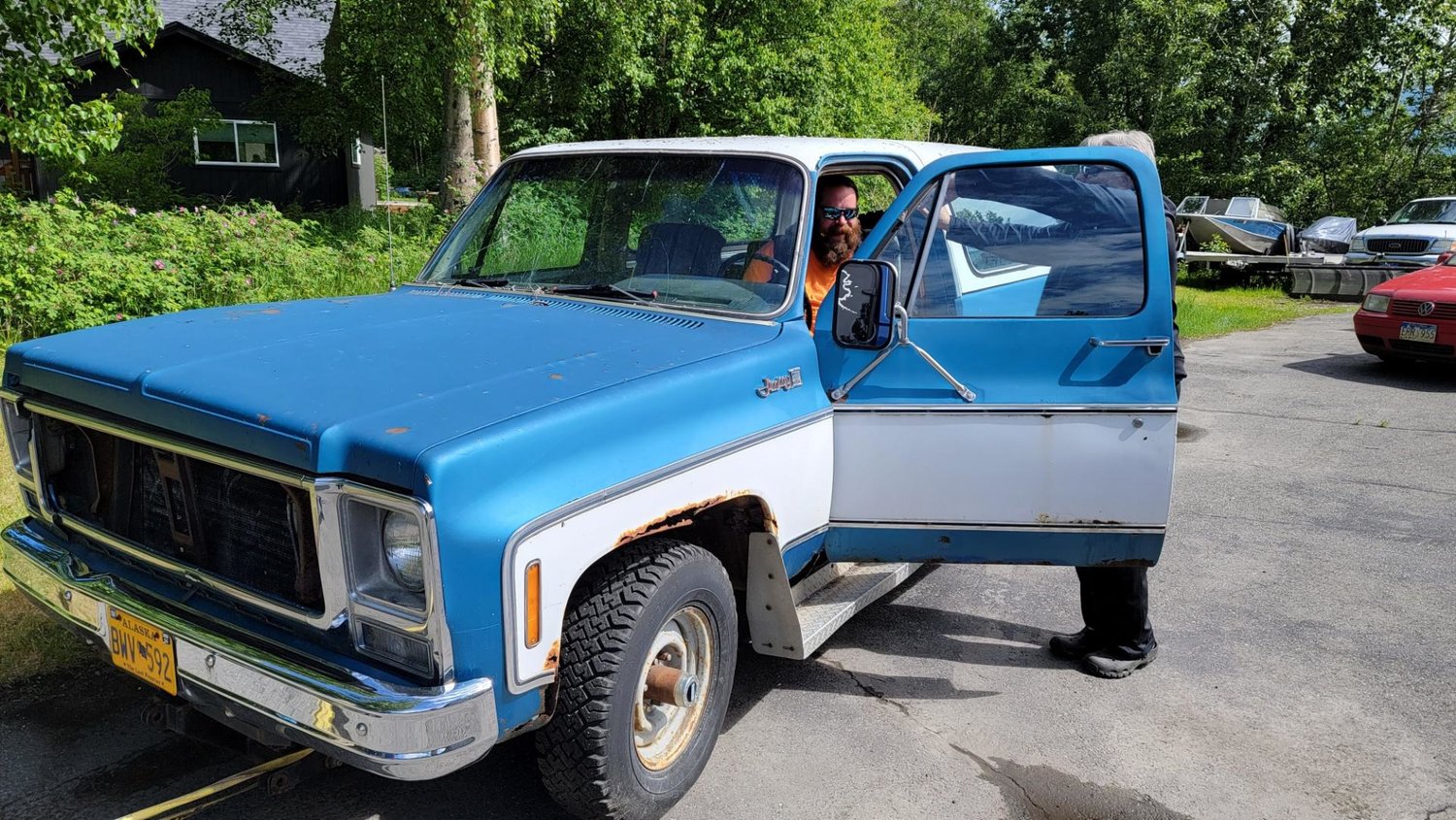 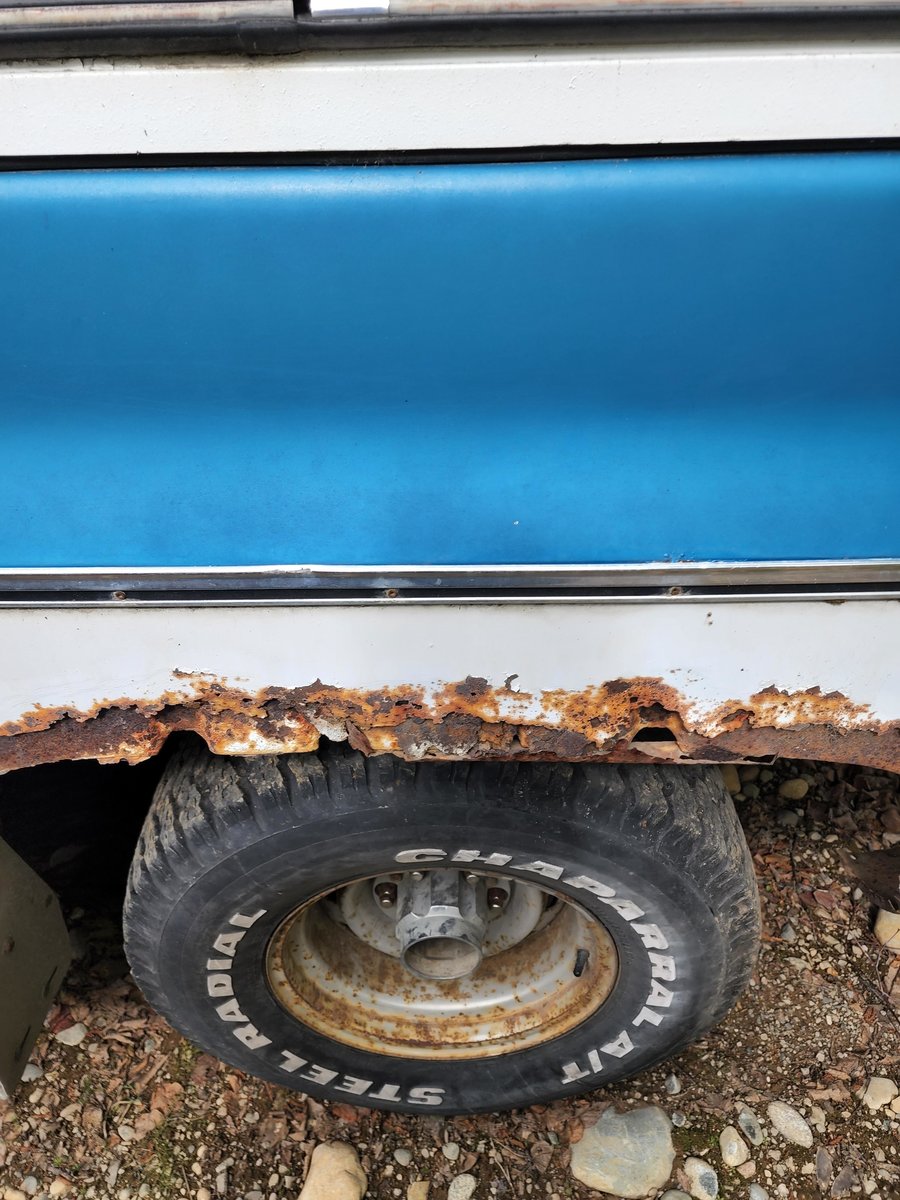 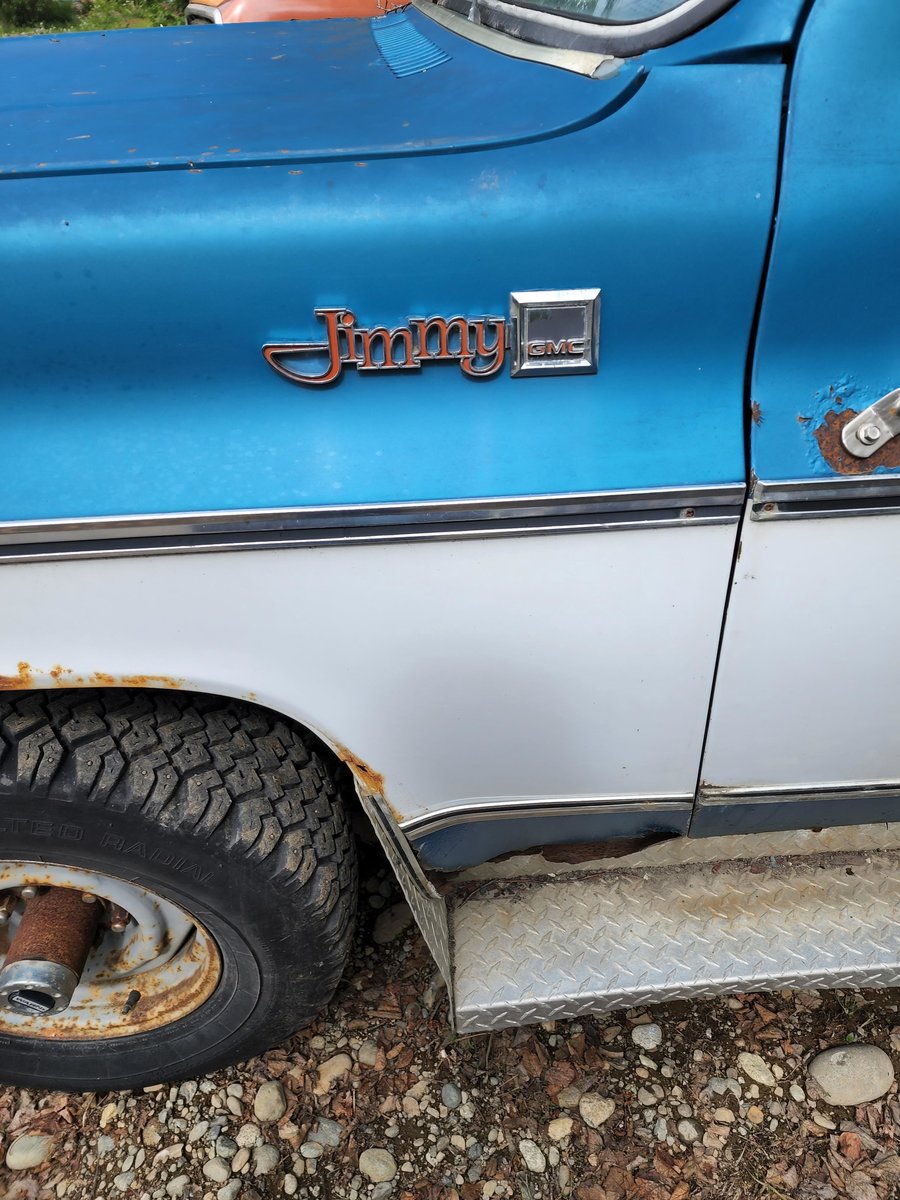 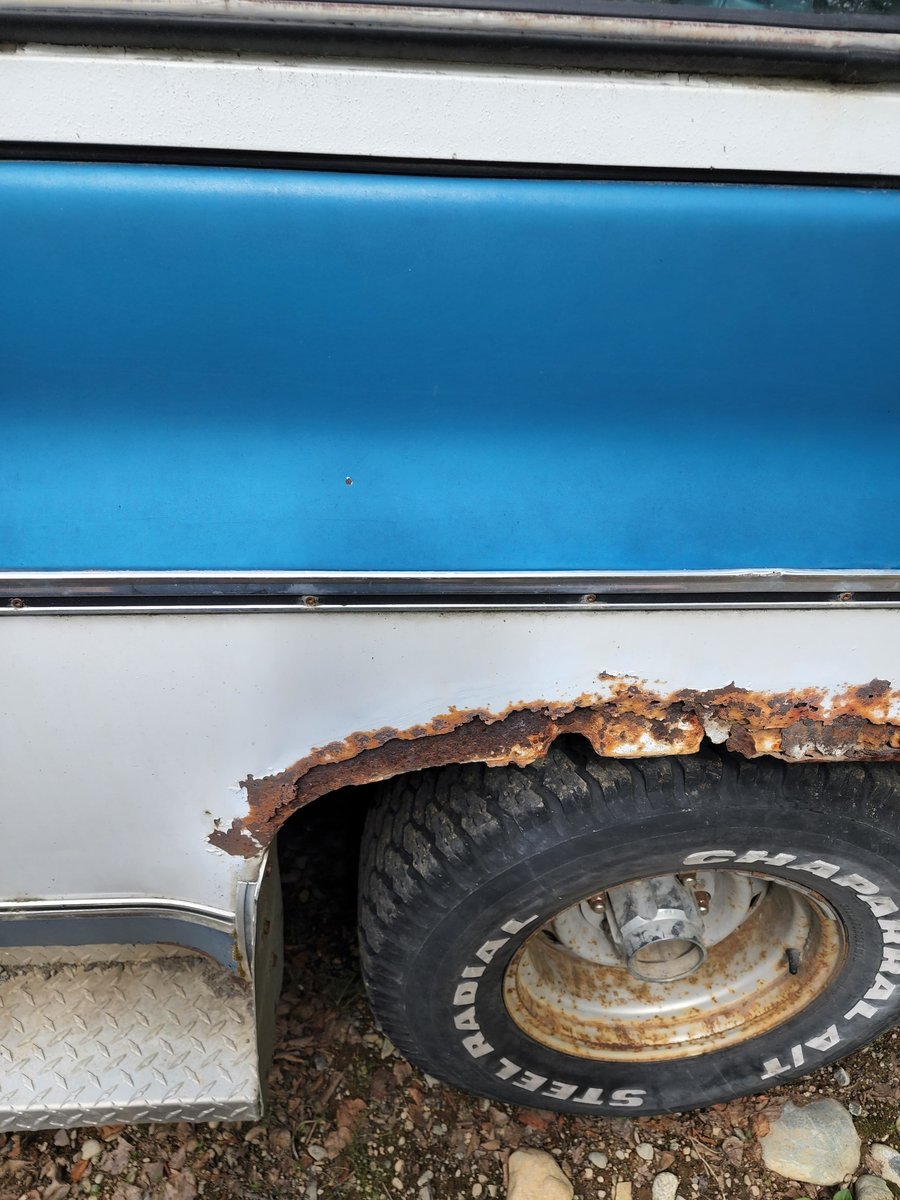