So I have had this suburban for many years, I want to say 15 years.
Bought it not running, supposedly bad ip, tried to mess with the timing see if it wanted to start, changed glow plugs, checked compression and it was ok, even in all cylinders, then someone from upstate new York bought it sight unseen and was sure he could get it started and drive it home from California.
He flew in with his wife spent all day, could not get anywhere, so I offered to take it back.
A few years later I traded it for a diesel crew cab project that supposedly ran, after a few months of trying to get it it to run, he gave up, and I traded him a turbo setup and a front d44 8lug 4.10 gears for it and got it back.
It sat at my buddy's house for the past 7years and now I have an engine to swap in it.
I got the engine from Colby Stephens truck that I parted recently. The engine ran pretty good before I parked it and eventually pulled it off and it sat for a few months outside.
I still have no direction for this build other than getting it running and improving my ratio of running vs non running vehicles.
I might sell it or keep it so I am trying to improve and make it as reliable as possible for the least out of pocket money for now. 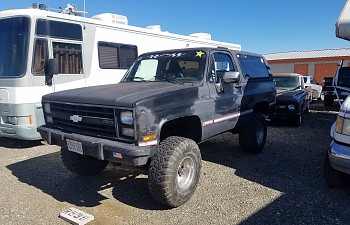 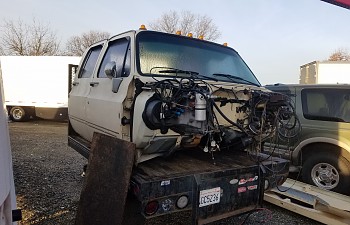 Just a place holder here it will be a while before I start. It's all in pieces. 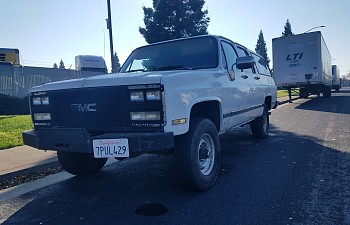 So as some by now know, it's mine. At first the plan was to use the engine for my sub and selling the body. But now that I have it sitting here, the plan is changing. I am thinking about making it my Wheeler. I got the brakes hooked up so I don't have another accident... When Colby brought it to me, we had this little incident while getting it off the trailer :banghead: So now as it sits where Ryoken`s truck used to.