Starting with a little background on me and the truck, I won't be offended if you skip this part!

Now my first car, in 1998, was a 1970 Dodge adventurer 2wd. Awesome truck but not for me so it was traded for a 62 bug that had some sort of alcohol heat system that, at 17-18 years old, I had no clue how to get it to work. At 34 I still don't!. Anyway, that was sold when winter came and I got a GMC Jimmy 89. I had that truck for a few years but after basic training and AIT I was driving it from NJ to where I was stationed in OK and blew the transmission on the way. Drove the last 100 miles or so in second gear. It got parked until I sold it. Army doesn't pay much and I was deploying so there was no time to get it going. I had a couple 80's square bodies between then and now but always wanted another K5. So after a divorce, a kid (that I maintained custody of because she was nuts) bankruptcy, going back to college and a big career change, another kid with my current fiancé, and some side jobs to save up for the truck, I took a drive to Delaware and picked up this truck for 2000. I wish I was on here first and read the post about what to look for! Anyway here is the truck the way I bought it. Had to try out the 4 wheel drive. 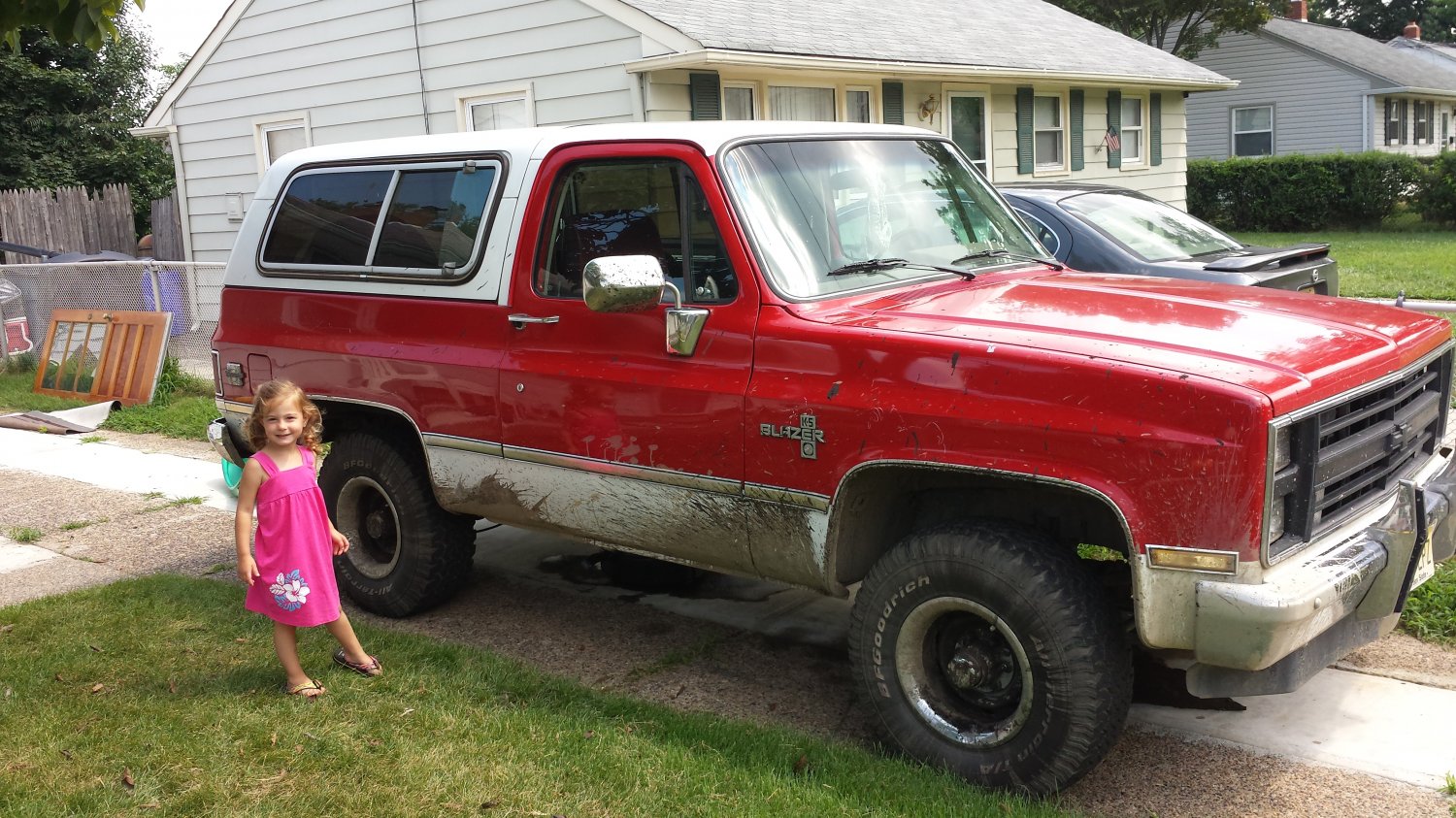 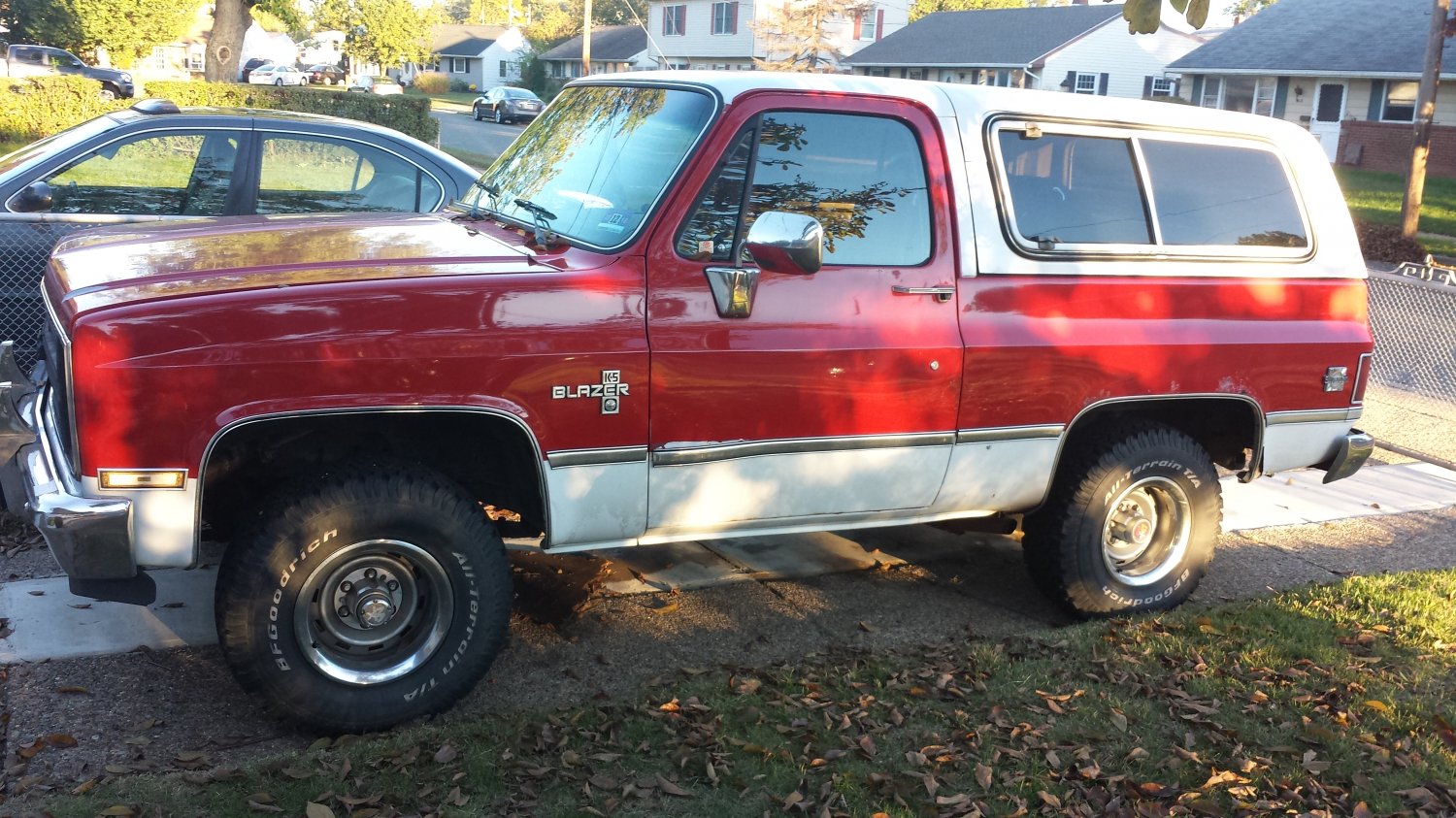 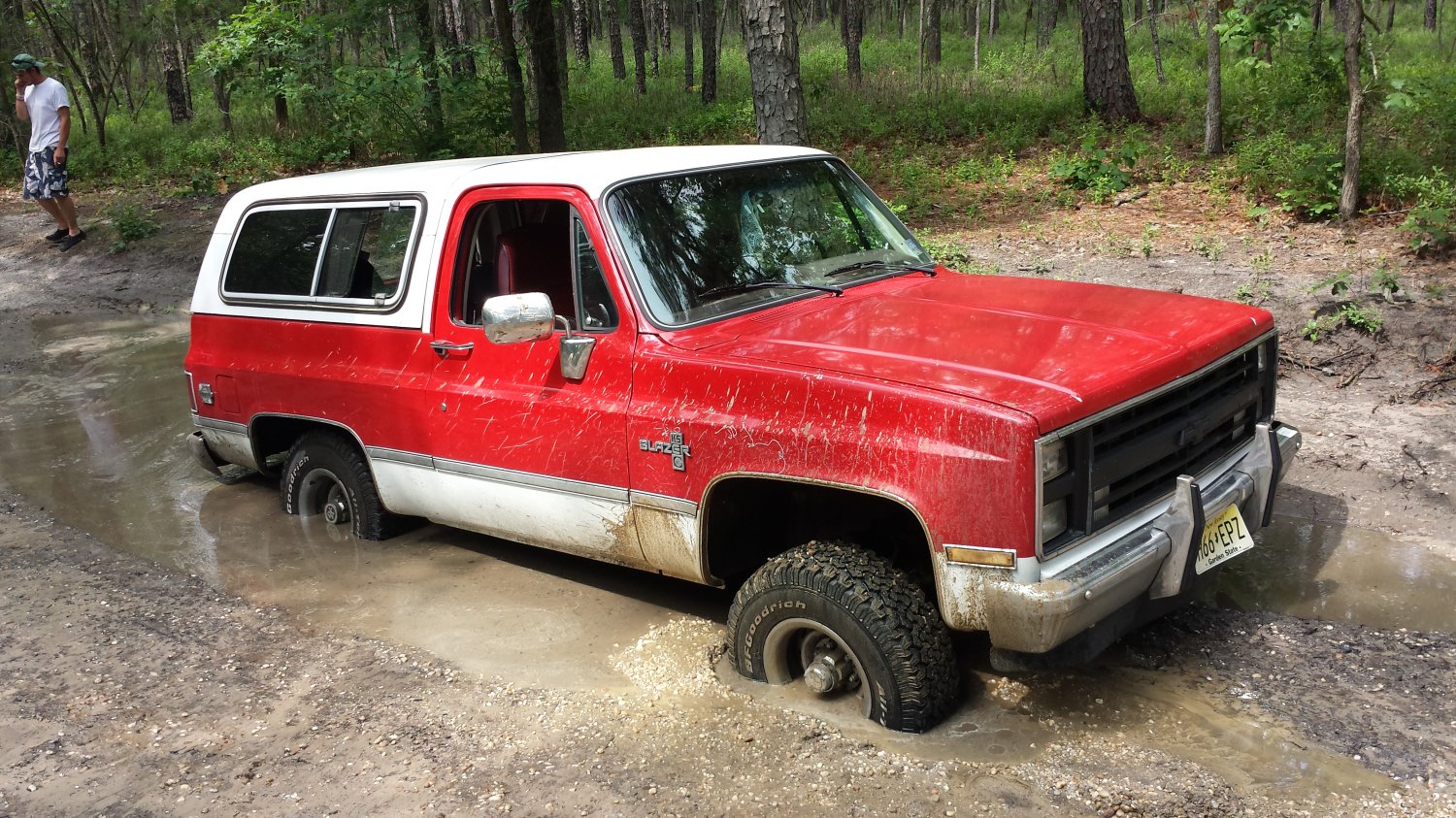 ...And the first time getting it temporarily lodged in place. My buddy back there on his phone said "just floor it" so I did, not realizing I wasn't in 4x4.

Well my goal is a capable family rig. so 31" tires and stock everything wasn't gonna cut it. After some advice from here I got a 4" lift from ORD and put it on. These are the only pics I have but it was just a wonderful experience! 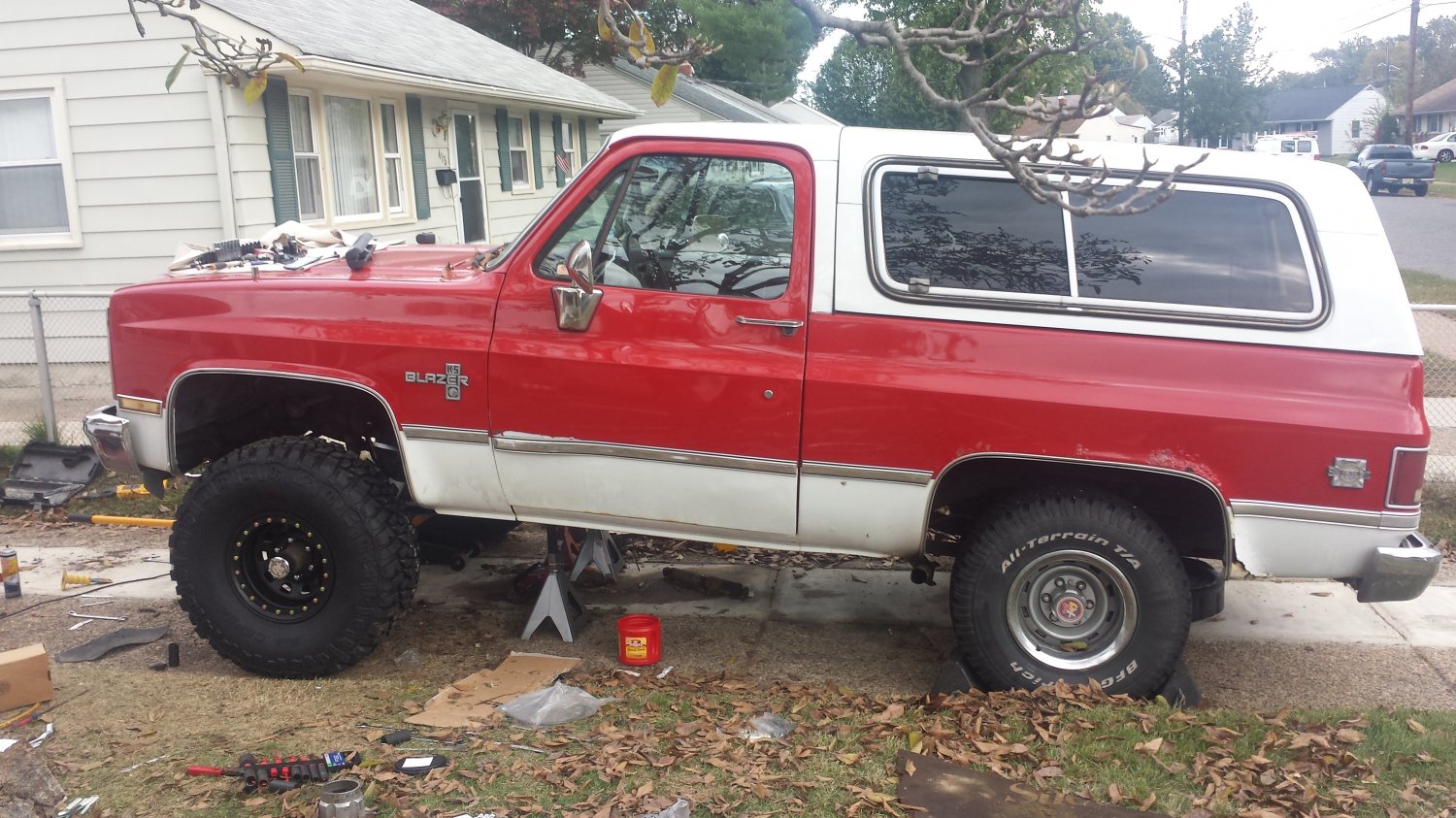 Now that that was done, I needed to ensure I that the next time I was temporarily lodged that I wouldn't need to walk a mile to find someone to yank me out. So, after a couple uneventful trips to the pine barrens I bought a welder (Hobart 240 for 100 bucks like new the guy was loaded and had no clue what to do with it) and had my first run at welding with flux core (ill get a bottle of gas before I do any more welding on here...maybe) 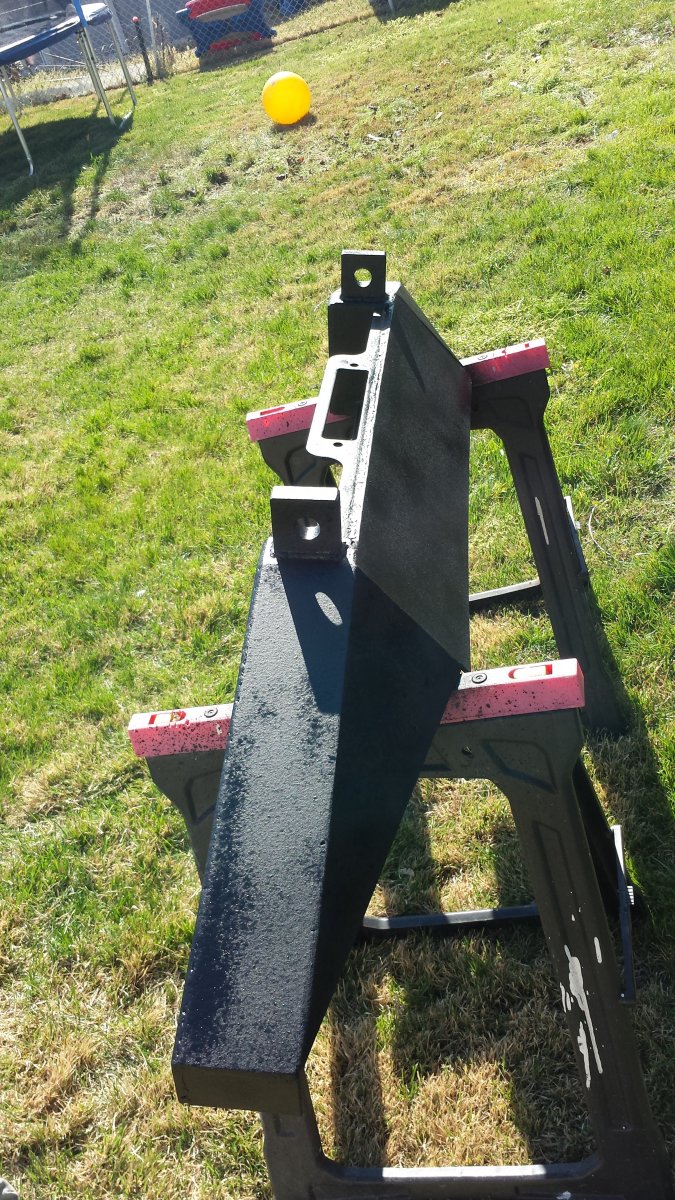 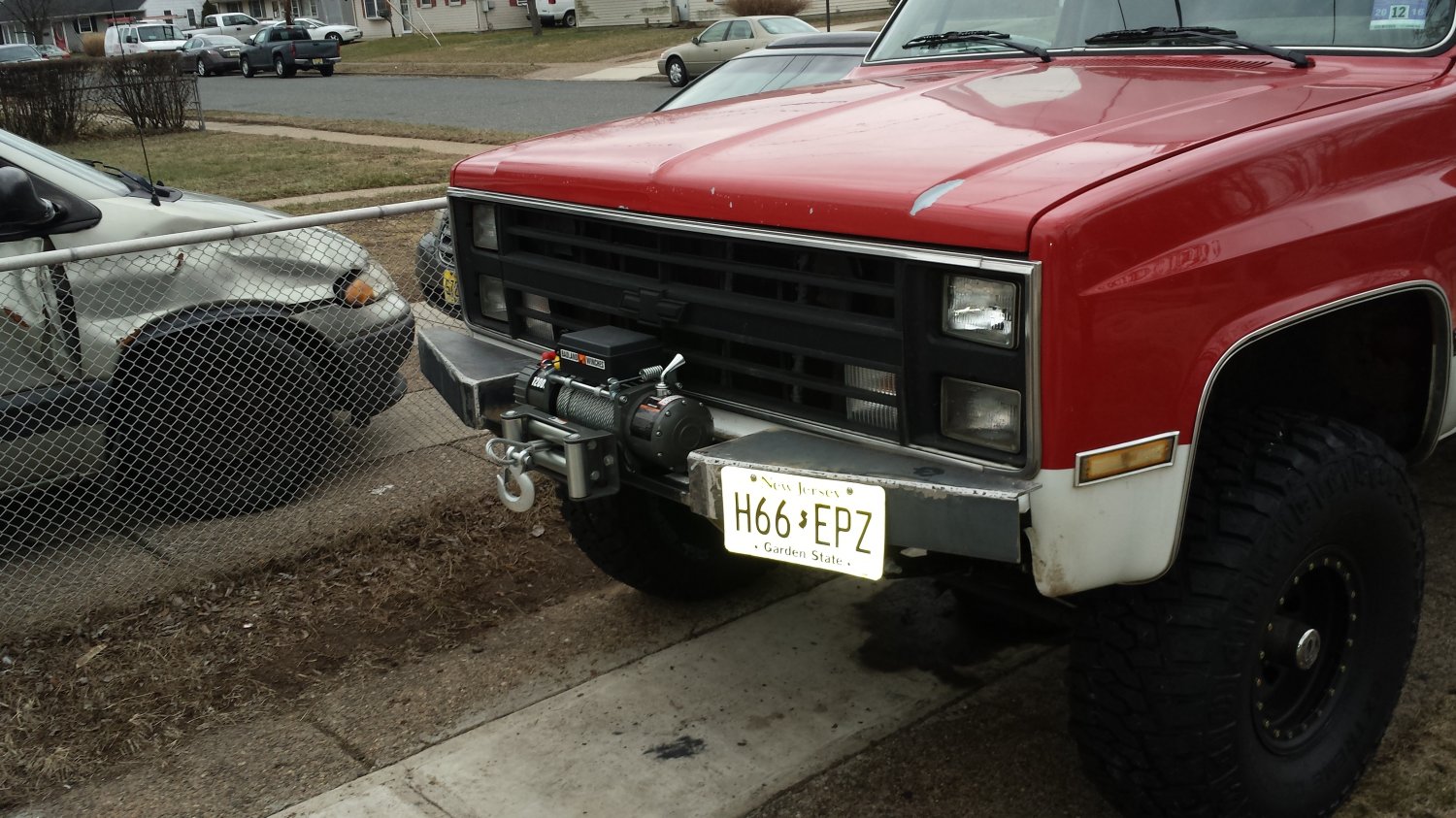 Still not done with that. In time. Used it a half a dozen times, seems my welds are holding!

That's how it sits today. Just enjoying it as is until I free up some time to get to more projects.

About those projects. I had an original plan but lots of build threads and discussions later, that went out the window. So here is my plan now, in no particular order.

The under side is a lot of rust and poor wiring. There is a hole in the lower flange of the frame in the passenger side behind the motor mount. A crack near one of the parking brake cable brackets and the cross member behind the transfer case is in rough shape. The body has a flaking coating of rust and some sort of liner put on by a PO. The radiator support is shot. A couple of body mount bushings have gone through the cab mount and a few smaller holes in the wheel wells. There are also a couple small holes at the base of the rear seat. So, I plan to get all new body mounts and a 1" body lift from ORD. While that is being installed I want to fix all the holes and go through the rust bullet process (unless there is a better product anyone wants to recommend). I am not going to completely remove the body just lift it up and do what I can from there. Working with only a drive way it is about my only option and it should be just fine...I hope. The body, excluding the underside, is in decent shape. The only real rust is around the wheel wells so I plan on putting some cut out flares and hope that that cuts out the most of the rust.

Rear bumper will be made, nothing fancy just basic with a tire carrier (I should probably get a 35" spare some time soon too!)

I found a 6 lug sf rear out of a 2500 chevy I hope to get a good deal on from the junk yard. For now I just want to put 4.10 gears in that and the front with a locker in the back (recommendations?). Maybe when the kids are older I'll go to 1 ton and get more adventurous.

Due to lack of knowledge, experience, a shop and proper tools, I plan to buy a turn key engine from jegs. they claim 330hp and 380torque and its all there serpentine system everything for around 4500. Warranty is a key thing for that and that I don't trust my self building a motor or know what would work best. Also a 700r4 from Monster.

Any one still with me here?!! This is getting longer then I expected.

I was thinking about a painless harness but I'll just work with what is in there for now. My Dad is pretty good with auto electrical wiring. Just clean up the mess the PO made and add what I need.

Rubber floor, seats out of a newer suv. Thanks to all the posts on here I have a good idea of what I could modify to work. Just need to find ones I like.

Roll cage will come toward the end if I can find a place to build me one cheap or, by that point, I may get a notcher and buy pre bent tubing.

And when ever they fall into the build a new head unit, speakers, CB...interior/non priority stuff.

Well, I think I covered most of it. I have some other pics I'll throw up when I get a chance. And from here on I will do my best to document my progress. Which, aside from the top, may not begin until mid september. Oh and I think I have a good plan to use my carpenter skills to make something that I can take the hard top off my self and just drive out from under. Not a truck part but with no garage it is definitely a necessity.

a couple more pic for those who made it. My little girl handles the comms for me when we go 'fweel' wheelin' as she calls it. In his defense, that truck is bone stock with street tires. He doesn't care though as long as he gets to go play. He still brags that that truck had to pull mine to the parking lot at the woods because my starter quit when we stopped for lunch. Sandy water filled holes is about all we have here in NJ. Not the most fun but we always have a good time. Pretty much common when we go now!! K5 Blazer | Jimmy
What to do

I have an 86 K5 and am looking for suggestions on building it up. My plans are a 4 inch lift with 35 inch tires first then I will move on to drive train and such. Of course as it breaks I will upgrade as well. My intentions are to keep it road worthy and I go off roading with my family. It is also my camper towing vehicle. So, what I am looking for is suggestions on making this happen. I am a capable mechanic but I am not a technical mechanic and my experience with building this type...