This is another of the forever projects that we start but never finish due it being ours and not someone else's project or better put, I keep changing my mind. If it was someone else's I would have the details worked out before the first twist of the wrist so no one is pissed about going over budget.


Back in the '80s and early '90s I had a sideline business that involved restoring muscle cars and some trucks along with racing for a while in the mud bogs of yesteryears gone past.


Having a full time job running a custom woodworking company (currently 23 employees) and doing the multiple hobbies thing (shooting, motorcycles and trucks to name a few) I have had no problems being broke. So this build that started as a build to do with my daughter who was in 14 at the time of inception was for her to get a better understanding of trucks and overall motor vehicles.


After the second year into the build she decided that she wanted a Jeep Wrangler. So after much searching we bought a 2004 Rubicon and built a Rubi. The K5 was on the back burner for a while.


Now being mine and only my project, the current influx of change went full tilt. Now going on six years into this project I now have the need to get it finished.


Why the rush? In December 2015 I was diagnosed with stage 4 colorectal cancer. I have gone through every type of chemotherapy and radiation with little to no success. Currently my body has begun not accepting the chemo so my need to finish has been pushed to a new level of prejudice. For the record, I am inoperable and have currently 15 locations in my body with cancer. 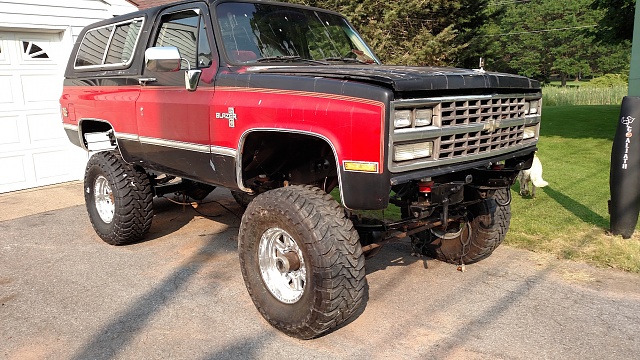 So, on to the build. First up, why COAL? Easy, this will be my wife’s and my daughters build. So, the wife’s name is Colleen and the daughter is Allison. CO and AL. There you go. The whole family has always ridden motorcycles so a manual transmission was a must. Just to prove that women can also drive. For the record we are not the typical family motorcycle crowd. I ride a BMW S1000RR, wife rides a ZX 14 and the daughter has her little Ninja.