88Silverado. Mods over the years. 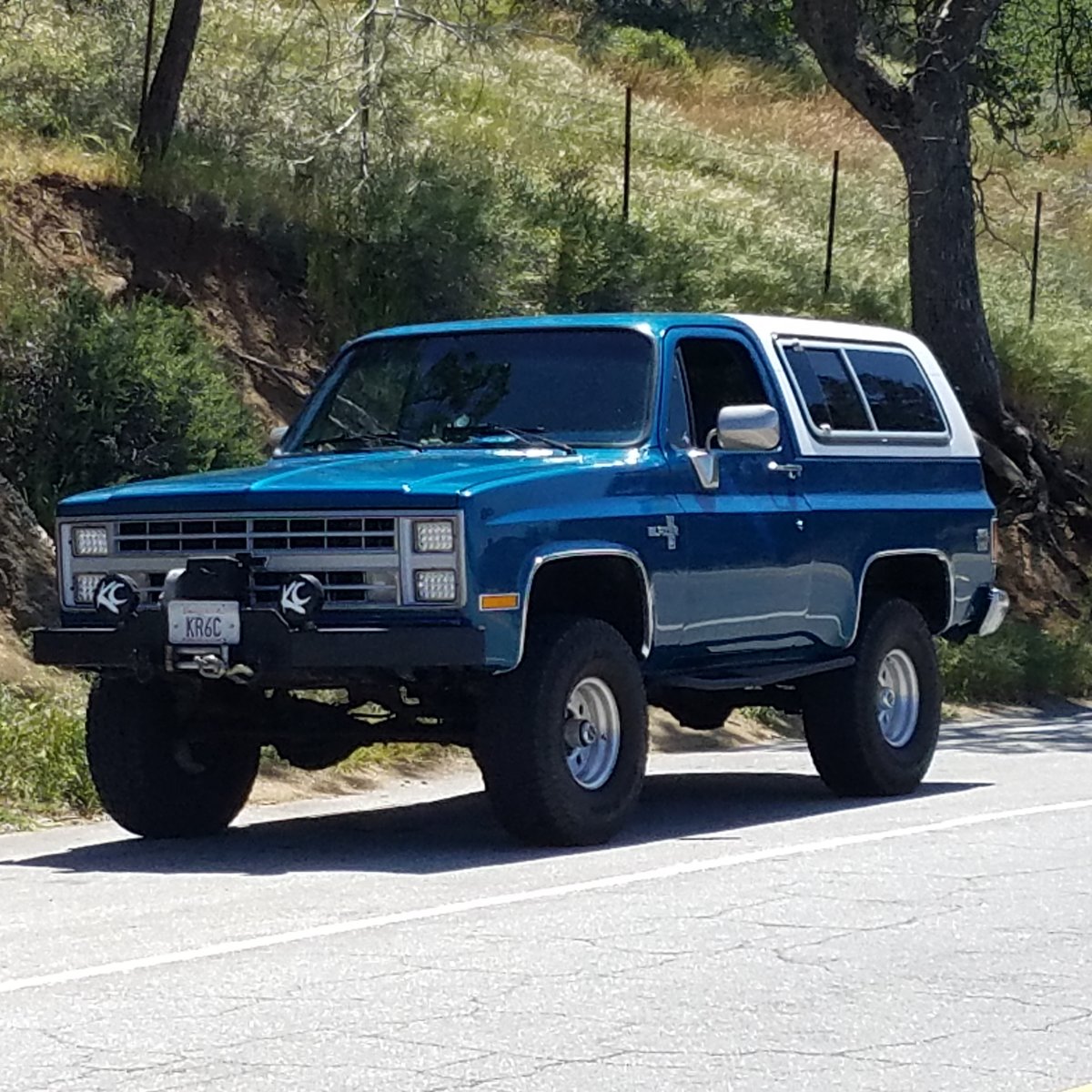 I purchased this stock, factory tow package Blazer from the original owner.
First mod was the addition of an external tire carrier I found for $25 and installing new Interco TrXus 33" tires. Loved them but none were round, took a ton of weight to balance and still bounced down the road. 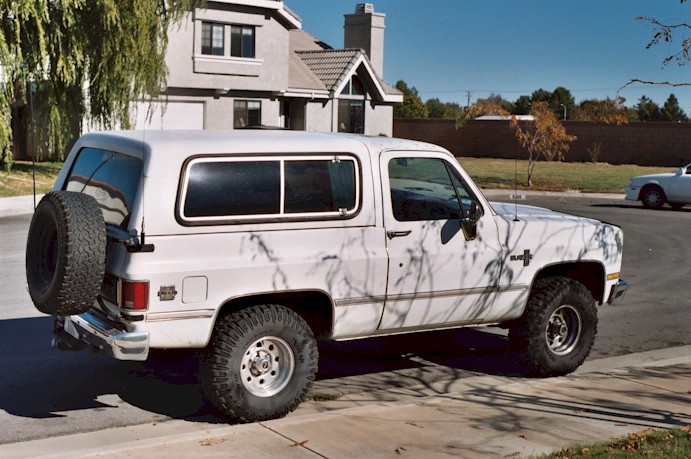 So, what's the first major thing to do with a stock Blazer? 4" Lift. First was installing the ORD flip for the rear springs. 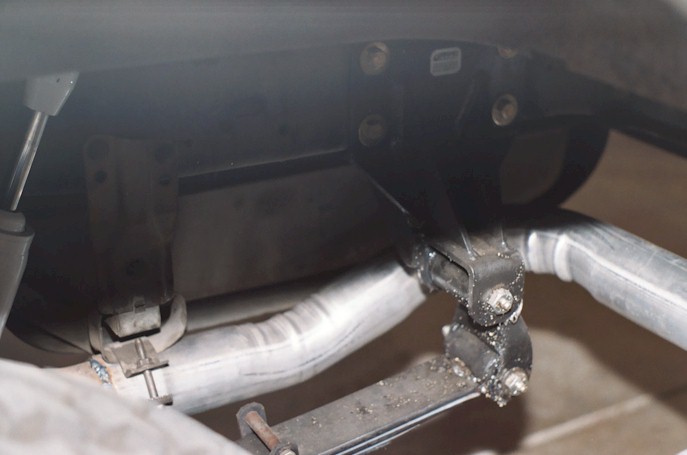 I decided to inset UHMPWE (Ultra-high molecular weight Polyethylene) strips between the leaf's for more slip. Over time, they did just that, got hard and slipped out from between springs. Wasn't worth the mod. Also installed Doetsch shocks but changed to inboard design later for more flex. 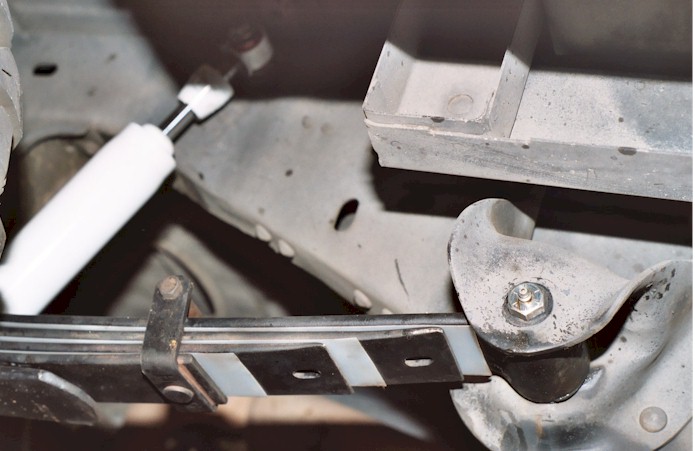 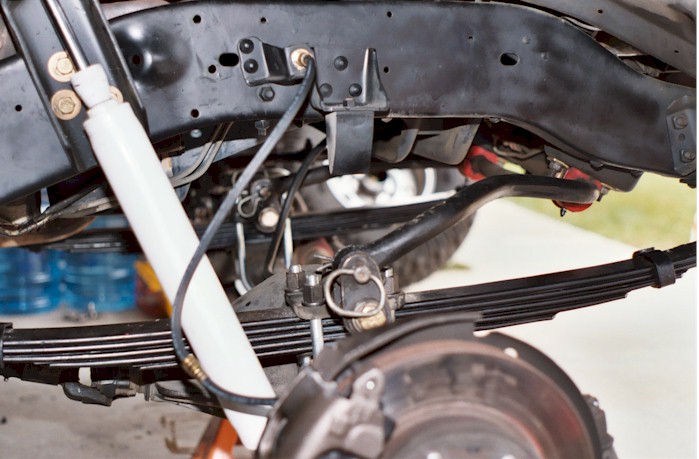 Because the lift caused some vibration due to u-joint angle change, I dropped the transfer case 1" with blocks. Now its better. This is what it looked like after the lift. 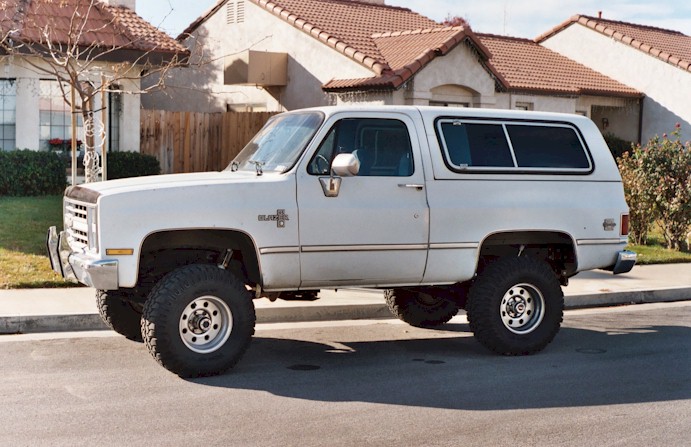 I found a set of custom sliders a CK5 member had and bought/installed them. 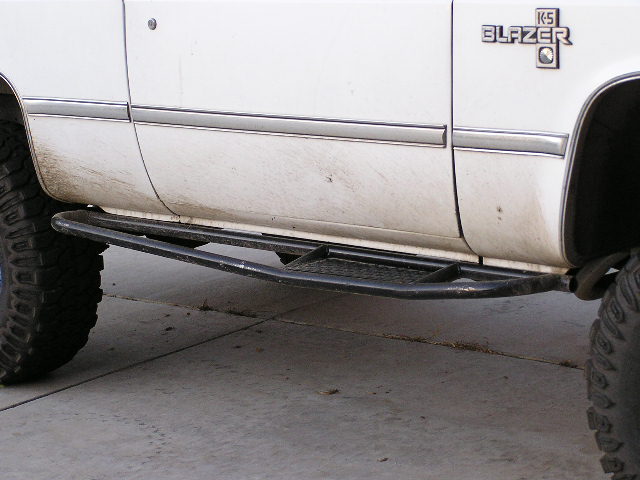 Next mod was to install a rear shock in-boarding kit MuddyTazz had fabricated in his garage. I had to reroute the exhaust due to the new shock location, then had it painted GM Bahama Blue The picture above is when I picked up the truck from the paint shop. It was 5PM on Friday. At 7AM Saturday I met some fellow CK5ers and went to Gorman to run trails. When finished both sides were beautifully pin-stripped. Beware, you can catch a ton of crap from the wife if you scratch it up before the paint is 24hrs old

I found an old Warn Winch bumper which would fit my old Warn 8000 upright winch and fabbed some brackets and installed it. 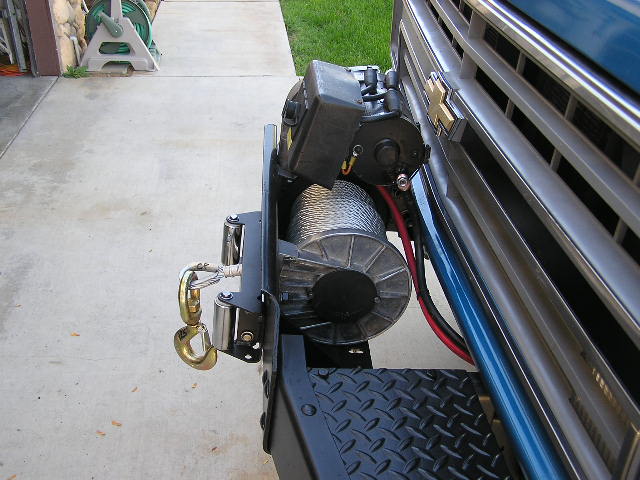 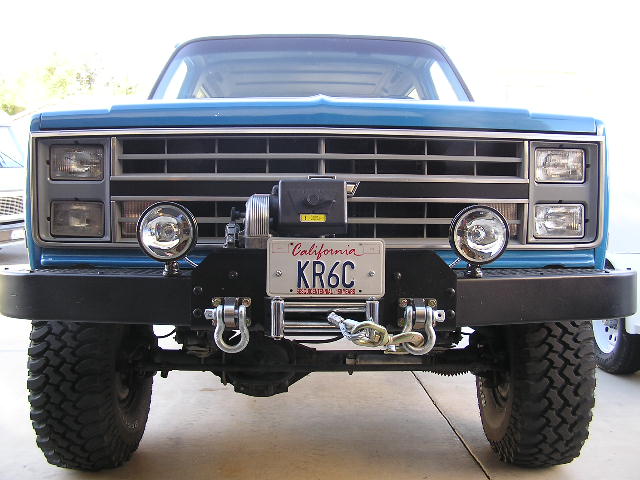 Added a dual battery setup and relay for the winch 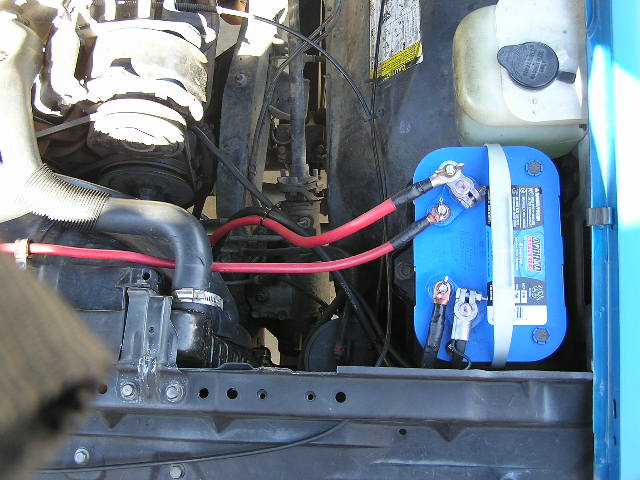 After driving this for about 15 years, and yes, running on some hard trails which subjected it to some body damage, I decided she needed to be sold or painted. As usual, one thing led to another and I basically replaced the interior (except seats), had it sanded down and repainted 1972 Corvette Bryar Blue (has a teal color depending on the light), installed a new stereo and speakers, blue LED dash lights and LED Head/Tail lights. 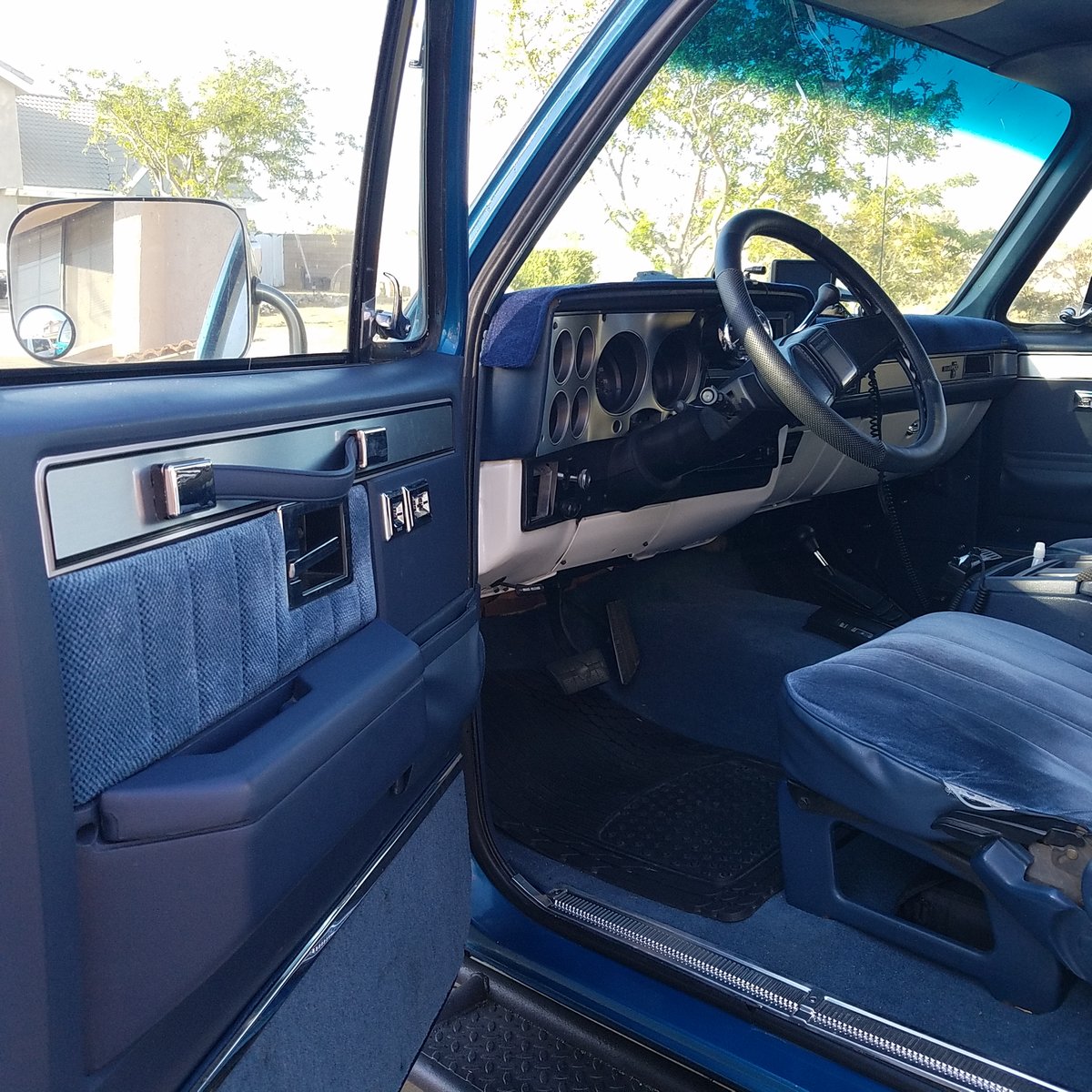 I sprayed the engine compartment and areas including the sliders and winch bumper with Dupli-Color Truck Bed Liner. And she's ready for another 15 years! I think this time I'll mostly run mild trails as I have a TJ that is used for the more serious stuff. 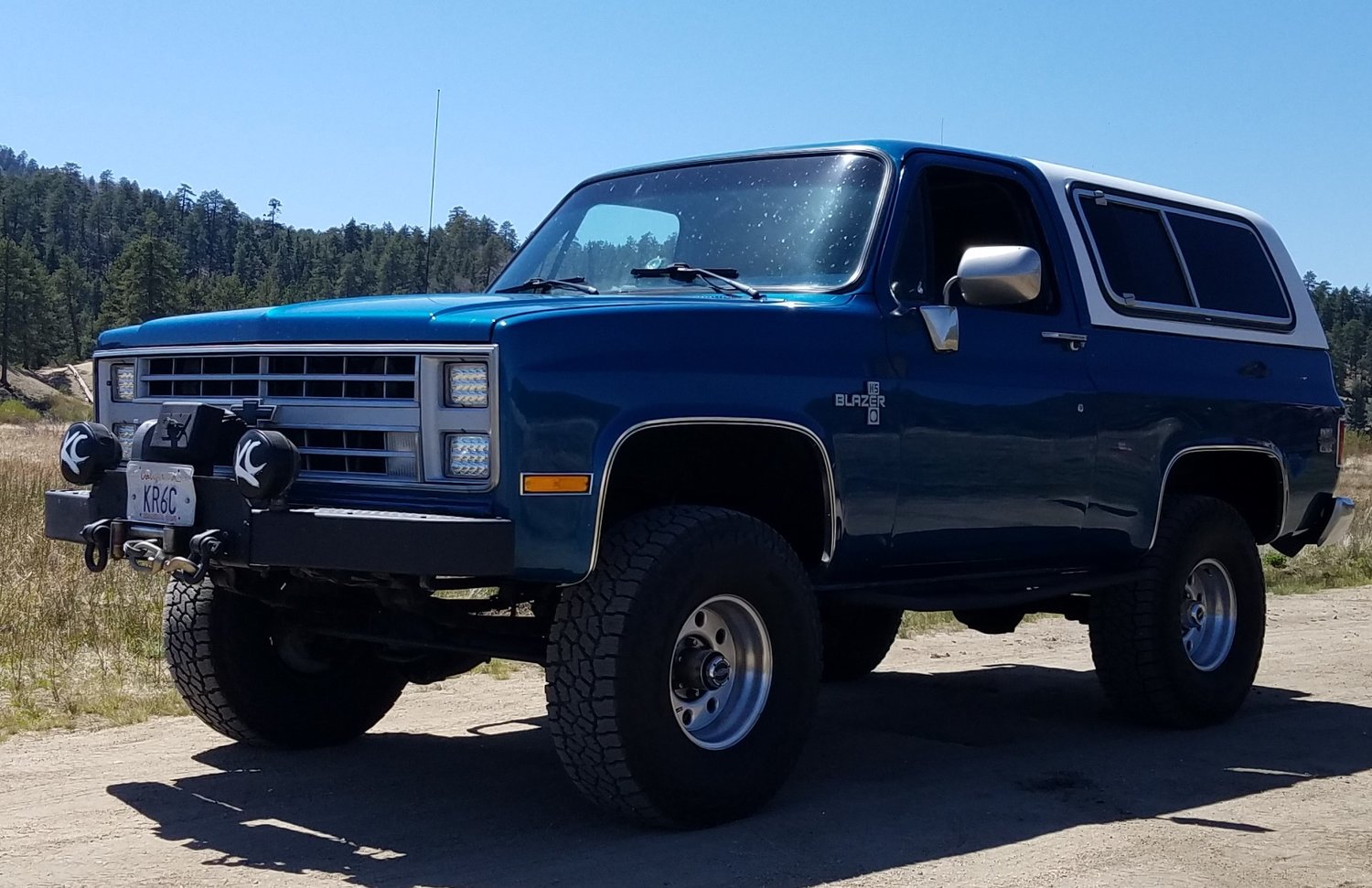