I figure its time for me to start a build thread for my Jimmy, before I start forgetting what I have done to it. I have owned the truck since October. I have had 5 or 6 k5's over the past 4 years and since buying my first one I have wanted an 87-91 truck. So I have been buying/selling and trading for the past few years and in October traded my Jeep YJ for this 89 Jimmy with 222k all original miles. I drove it home about 2 hours when I got it, with cold AC! I basically got it from the original owner because he is the best friend of the man I got it from, so I know the history of it.

When I got it: 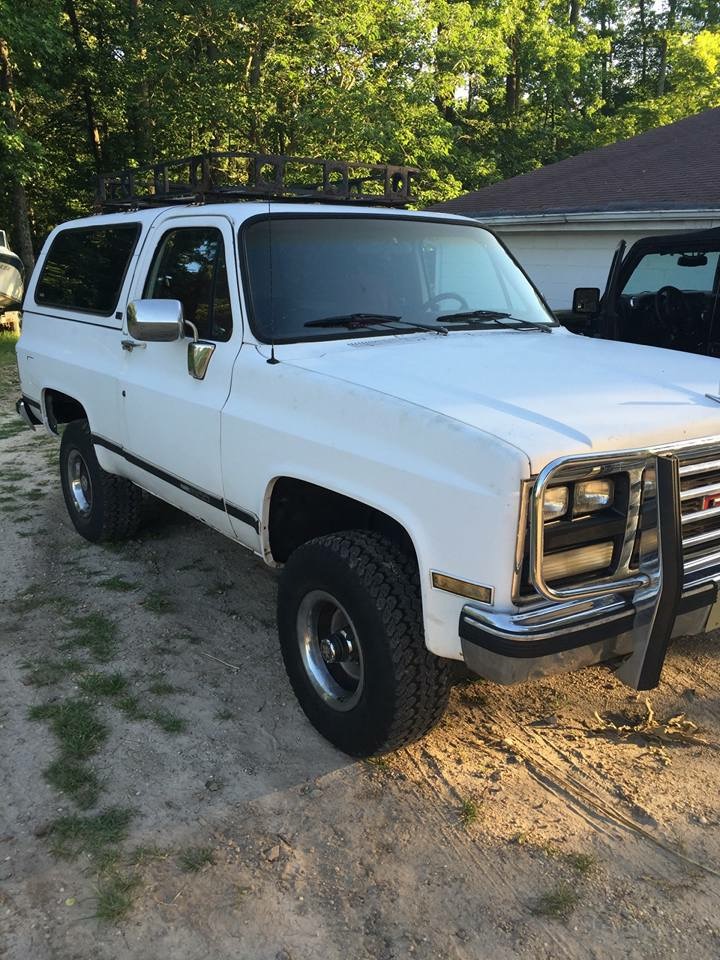 On the ride home I noticed a vibration that sounded like out of balance tires at 55 and 65 mph so a few days after bringing it home I threw on the 32x11.50 BFGs that were on the 76, which just sits in the garage now waiting to be restored. Vibration fixed and it looks much better. 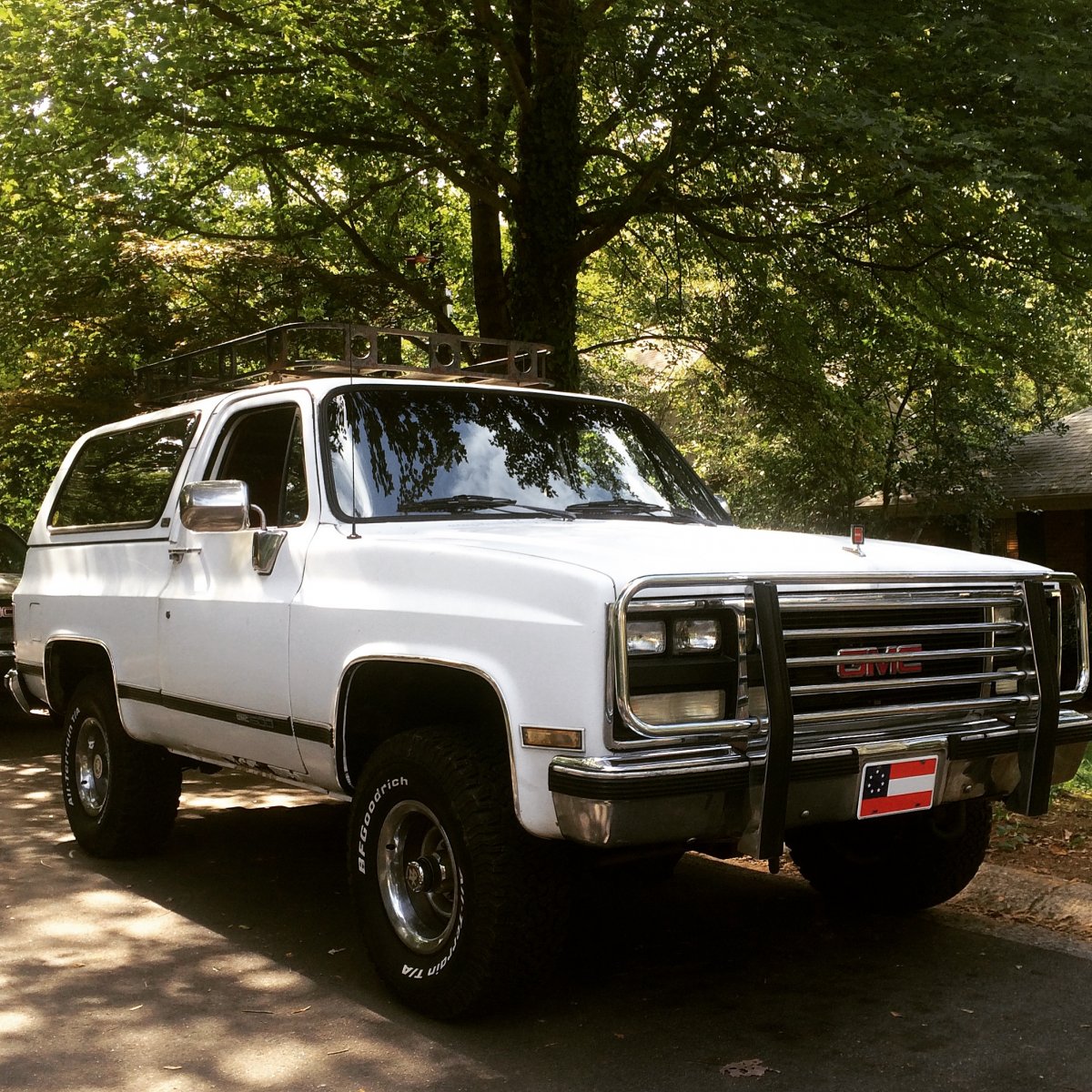 About a month later I walk out of school and notice a puddle under the rear end, look down and there's a hole in the diff cover. Never heard a noise, drive it home and pull the cover and several large pieces of ring gear fall out and the fluid looks like silver metallic paint. Rebuilt the axle with a friend. Installed a set of bilstien shocks while I was at it to make the truck ride as good as possible on worn out factory springs. 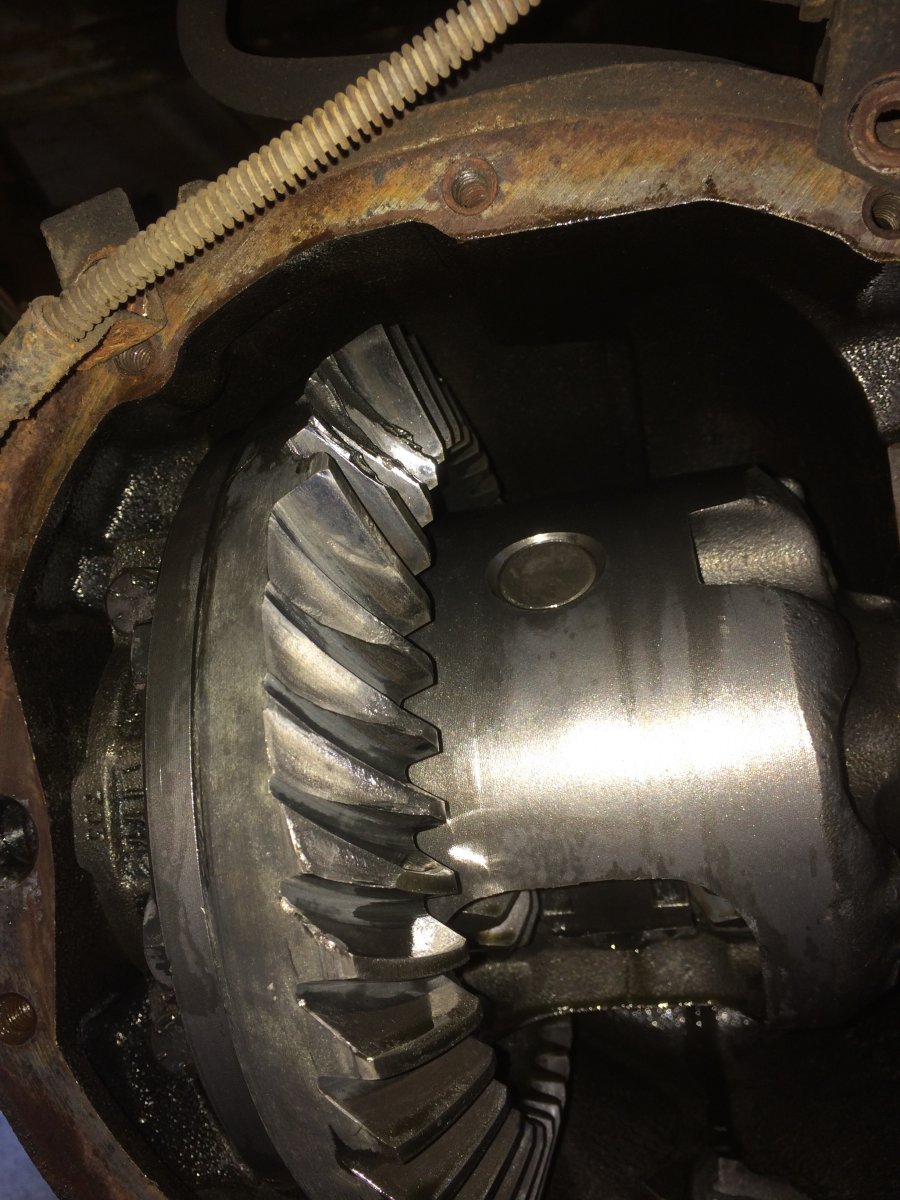 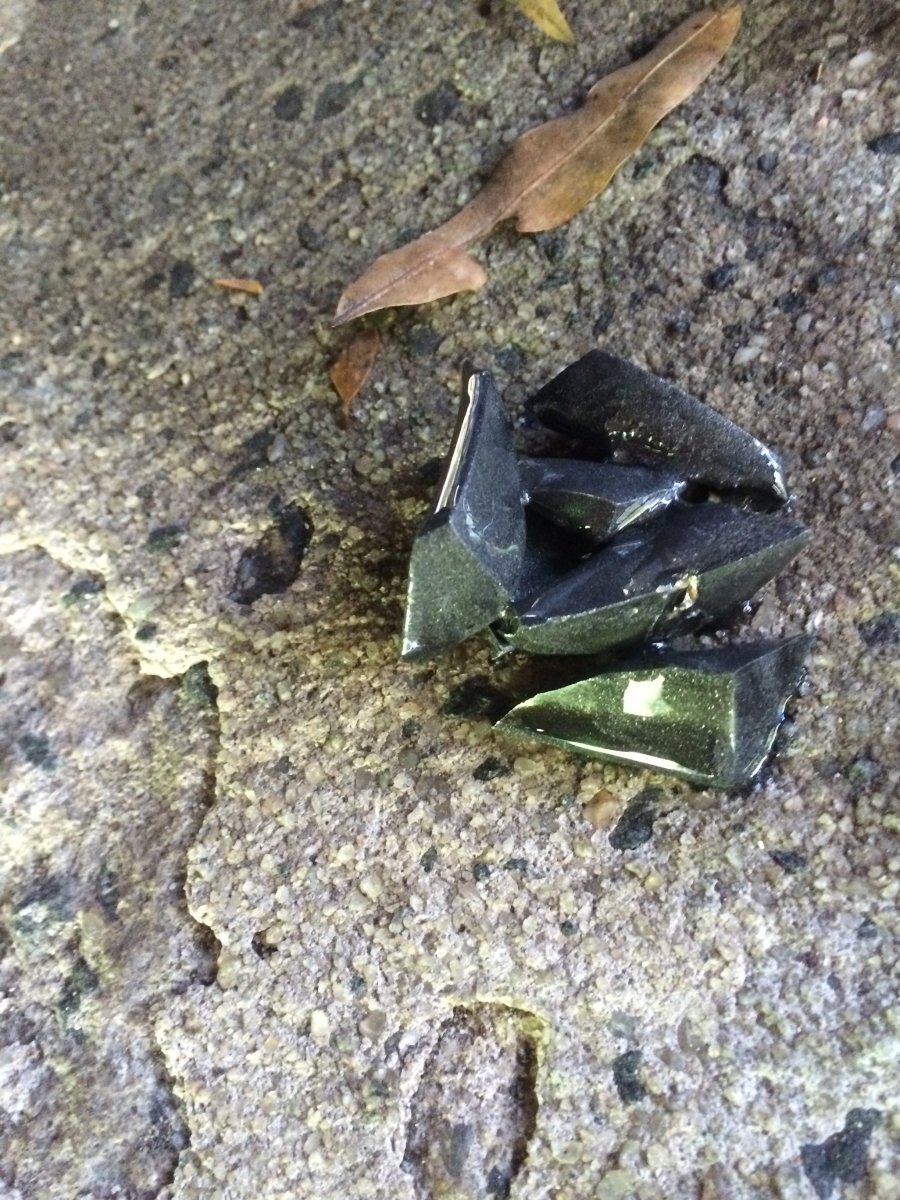 Drove it daily for another couple of weeks after the axle rebuild with no problems, then the AC compressor starts howling and grinding intermittently and then all the time, so I change it out along with the accumulator and orifice. Buddy charged the system back up at his shop, works great now and was already retrofitted to r134.

I vaguely remember dropping and then pushing back on one of the caps off the rear axle u joint when I was reinstalling the rear shaft after rebuilding the axle, but I didn't think about it until a vibration started at 45mph getting worse the faster you went, so new Moog u joints in the rear shaft and all good there.

That brings us up to the current point, and the only other things I have done are a tune up and installed a few interior pieces that were missing when I got the truck, door panel trim and the chrome caps that cover the pull straps along with the driver door lock pawl. Also changed out the locks because the old ones were hanging up.

Plan for this truck is to make it my primary daily driver (which it is right now already). I plan to build my 76 to wheel, so this truck will see primarily pavement except for driving around on friends hunting property or going camping off of gravel forest service roads. I want to keep it pretty much stock, but when these tires wear out, which will be awhile, I am probably going to lift it 4 inches and put on 35s because it needs new springs anyway. It runs and drives great though, I have put almost 3000 miles on it so far and driven it on 3 or 4 highway trips. It is an optioned out truck and the power amenities are nice. This is what I wanted, modern amenities and fuel injection but still a classic rig. The interior is almost mint. The original paint looks halfway decent. The rockers are shot and it needs rear wheelhouse patch panels but otherwise its solid. My next step is to fix the cruise control, pretty sure all it is is the vacuum servo. Then the rust will be the next thing and paint. After that maybe a crate 350 and rebuilt trans to replace the tired OE units. 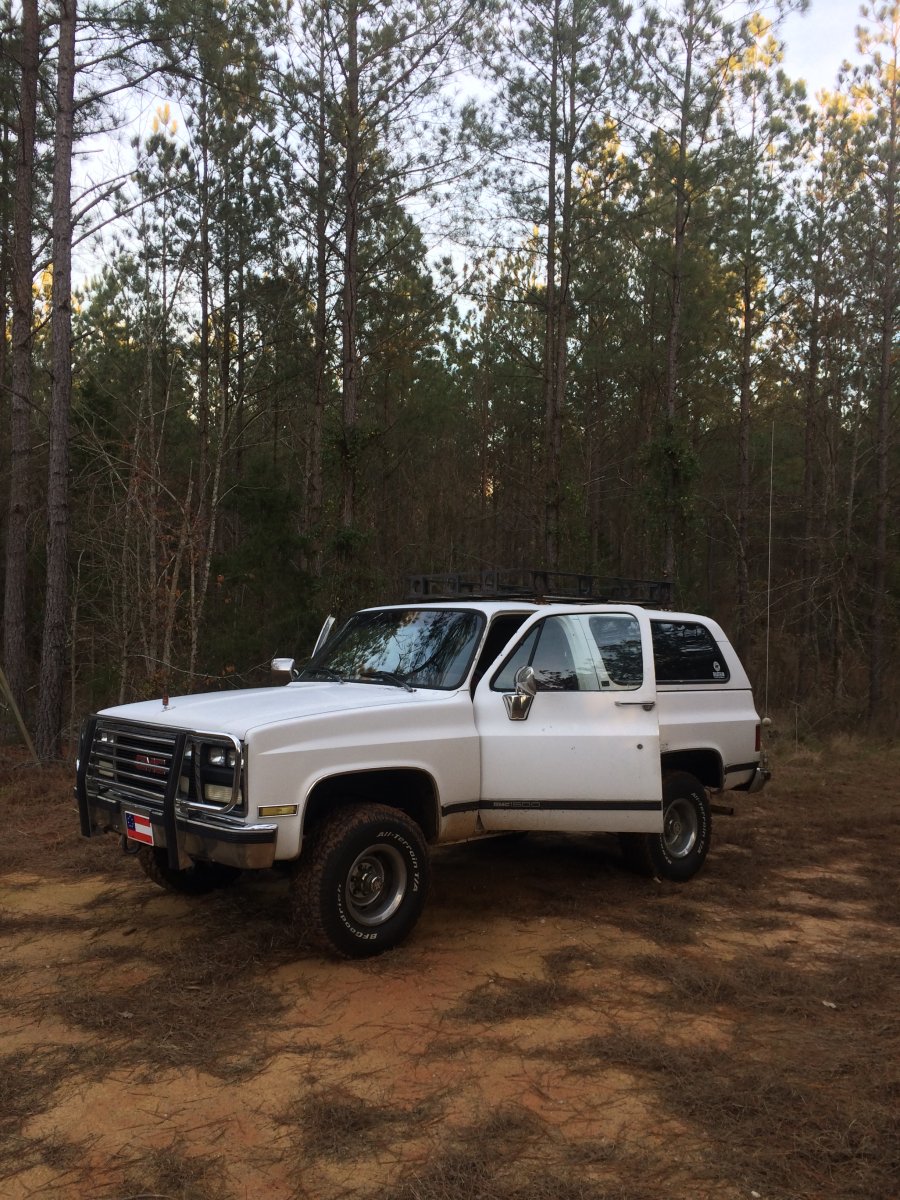 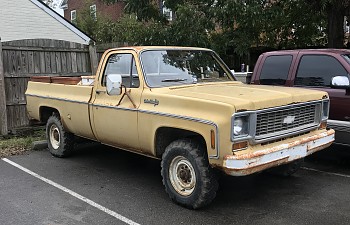 All original 74 k20 I picked up around Thanksgiving, 2018. Found the truck on Facebook Marketplace where I currently live in Eastern NC. Looked solid in the pics so I went to check it out, gambled on it having no title but the seller told me a story that seemed legit and with the shape the truck was in I couldn't pass on it, so I drug it home with a tow strap for $1500. The cab and bed are 100% solid, no rust. Only rot on the whole truck was a little in the front of the hood and bottom of...

I picked up this 84 on Tuesday. Drove it home 85 miles. It runs decent and supposedly the trans and t case were rebuilt "recently". It's all original, dash clock and original radio still work. Plans originally were to do kind of a quick flip and sell. We will see. I'm kinda already digging the truck. First thing I'm doing is bodywork, fixing the rust and sanding her down to be painted the original navy blue color. It needs both cab corners and a driver side rear wheelhouse, passenger rear...

Going to document the build of my 72 c10 here. I have owned the truck for a year now and it has been good. Have only had one problem which was a rusty fuel tank. After that its been dead reliable. Its got the original 350, was rebuilt 5000 miles ago, runs great. Problem is, it has a 2.73 rear gear so its a dog. I have wanted to build something 2wd and fast for awhile now, part of why I got the truck. I want to eventually have a nice hot rod that I can cruise around town in and do burnouts...