Ultimately this thread may need to be moved to the Driveway section, but since I have so many questions right now I thought I would put it here for some help on technical matters.

First the story, then the questions...

The Story:
About 10 years ago I found a 1990 K5 that was in great condition for sale by a guy here locally. 185,000 miles on it, but supposedly a new engine within the last 40-50K. It had gotten a new paint job (in blue, my favorite color for K5s, but not an award winning paint job in terms of quality), and the PO had installed a body lift (not my favorite choice for a lift, but for my budget at the time it allowed me to buy wheels and tires instead of spending money on a lift). I promptly threw on a set of 33x14.50 Boggers and put a thumping stereo in. Life was good...

I drove my new to me K5 for a couple of years as a second vehicle with only minor issues (new A/C was needed, some electrical gremlins, etc.), and then I started to have an overheating problem. 99% of the driving this truck sees is surface streets going to and from the gym, or cruising around on the weekend. Texas heat in the Summer and stop and go traffic was starting to be too much for the 18 year old cooling system. Compounding the problem was the body lift that spaced the fan shroud out and screwed up the flow of air. I decided an electric fan set up would be my solution, so I dropped my K5 off at my buddy's/mechanic shop. He promptly tore out the radiator, and then got busy with other projects while my K5 got pushed off to the side. That was about 5 or 6 years ago...

Now, in the past 5-6 years I've prodded my buddy many times to get my Blazer running again. I even went so far as to buy the suspension lift, ORD parts needed for my D60/14FF swap, dropped off the axles to him, etc. several years ago, and yet there it sat still. I was pretty busy with other things during that time, and to my buddy's credit he did do a full body off major rebuild of my Excursion that took a couple months to do sometime during all this time, but about a year ago I finally hooked up my Blazer and towed it from his shop to my shop (work) where I thought I would finally get it running again. Then it sat again for another year...

I tell all this back story since so many us of have projects that have languished in our garages, yards, carports, etc. for years without being completed, so I know I have some sympathetic ears when I recount the journey that has gotten me here. The inspiration to finally get this project moving again actually kind of happened because my guys were slow at the shop for several days and they had been bugging me for long time to let them paint my Blazer. The "repaint" the PO had done had faded pretty bad since it sat outside at my buddy's shop for years in the Texas sun. My guys paint industrial equipment REALLY well, and can even do truck cabs, etc., but this is really their first automotive project. Automotive and Industrial paints are pretty different in that industrial stuff is more about corrosion control first, and then aesthetics is secondary. It still has to look good, but keeping corrosion away is what it is really about. Anyway, my guys got my K5 wheeled out to one of the blast booths and the work began.

(Since I'm not really sure how to insert photos into the body of these posts, between paragraphs, I think most of my pics will end up at the end of the post)

There was some surface rust starting to show in the wheel wells as well as a minor amount on the frame. It was all cosmetic, but we went ahead and took that down with a light blast, and then shot black polyurethane (industrial DTM) over the underside and in the wheel wells.

For the exterior, this started out as a simple scuff, spot prime, seal, color, topcoat application. As they were prepping it I realized the bumpers would need to come off to get the paint behind them properly. Off those came, which exposed some areas that we couldn't get to before for painting the black on the underside of the truck. Easy enough to touch that up though. Not wanting to go to all of the trouble, the grille, body side moldings, and emblems were left on (that made it easier plus I didn't want to shell out $ on new moldings, etc.). In hindsight, those should have been removed since we ultimately did that to try and clean up the grille and fix the headlight mounts that were now broken. Well, I did say this was the first automotive job we had done, didn't I? Once again, not terribly difficult to remedy (took the grille off, touched things up, and I'm leaving the side moldings on and we might just paint those with trim paint), but a note to others contemplating a DIY paint job: Take everything off that you possibly can take off BEFORE you shoot any paint.

My guys spot primed the parts where they had sanded down most aggressively (plus we found bondo on the roof that we had to redo), and then they shot a sealer over the whole thing. Our PPG rep said this was the best "security" measure we could do since we weren't going all the way down to metal with the sanding. The sealer should help prevent any of the original paint from peeling away as we overcoat it with the new paint. Next, the color was added, and I think they ended up doing 3-4 light coats. Clear coat was then done, and again that was 3-4 light coats. I was actually really impressed with the way the paint job turned out (only minor orange peel in some areas), but since we are in an industrial environment, our booth isn't super "clean". We ended up with a bunch of trash in the clear coat that REALLY stood out once it dried. It dried for about a week and we called in reinforcements (friend of one of my painters that owns a body shop), and he came to look at it. He was pretty impressed with the job they did for their first automotive paint job, and he did a little work with some 1500 sand paper and water to see if he could get some of the trash out. Luckily he could, but he only did a small section since he said we need to let the paint cure for another 3 weeks or so. He wants it really hard before he wet sands with 1500, then 2000, and then he will polish it with 3 different compounds before finally applying a wax. This hasn't been done yet, so I'm not sure what the compounds are. I'll try and update this once we finally get the paint totally straightened out.

One thing I knew already was that proper prep was essential to how the end product looks. Unfortunately we didn't pay close enough attention, and there are some imperfections in the hood from hail. Plus the bodyshop painter said we made the mistake of hand sanding in some places instead of using a block, so we got some waves in a couple of places. Overall it looks tons better, but there are some things we would address differently if we had to do it again.

Now that I have it painted (probably not the first thing we should have done, but it did at least motivate me to get this thing going again), I'm going to address some mechanical issues, do the suspension install (modest 2.5" Skyjacker springs), and install the D60/14FF. These mechanical issues are going to be where I have most of the questions, but since I'm running out of time this morning as I type this, I will have to come back to this thread later and start asking those questions.

For now, I'm going to post up some pics, so you can see the work in progress. The first pics are actually from when I had it running 7 or so years ago. That was kind of how I originally had it configured. Then the pic of it behind my Excursion is about the only pic I have of it in it's "faded" state after sitting for years. That was the day I brought it back to my shop over a year ago. Then you can see the progression from the blast booth, to prep, to paint. I've got it in our workshop area now so we can fab some rock sliders/steps, and I hope to have my parts in this week so we can start putting it back together. I'll post my questions later on when I get some time to revisit them. Thanks for looking! 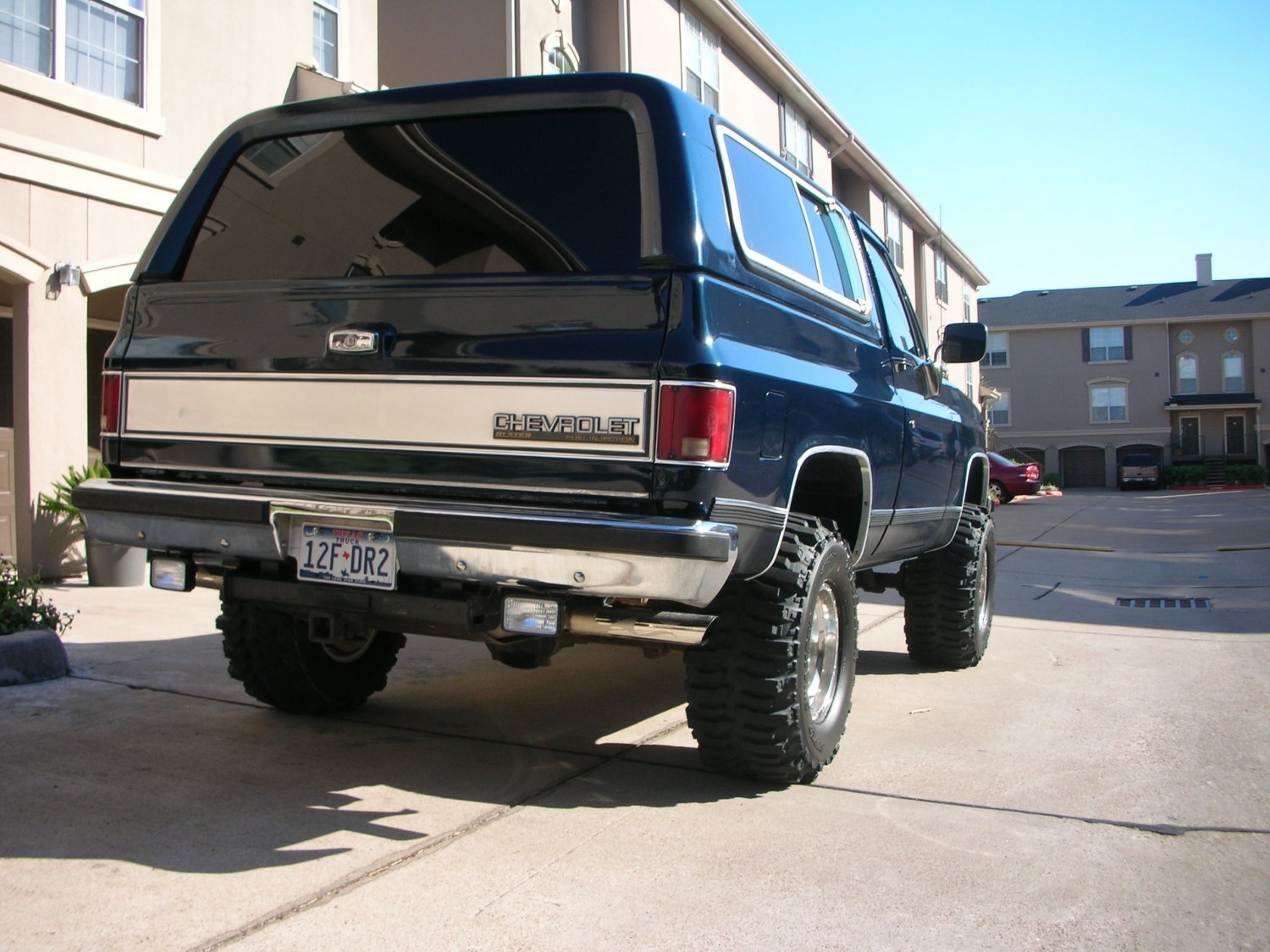 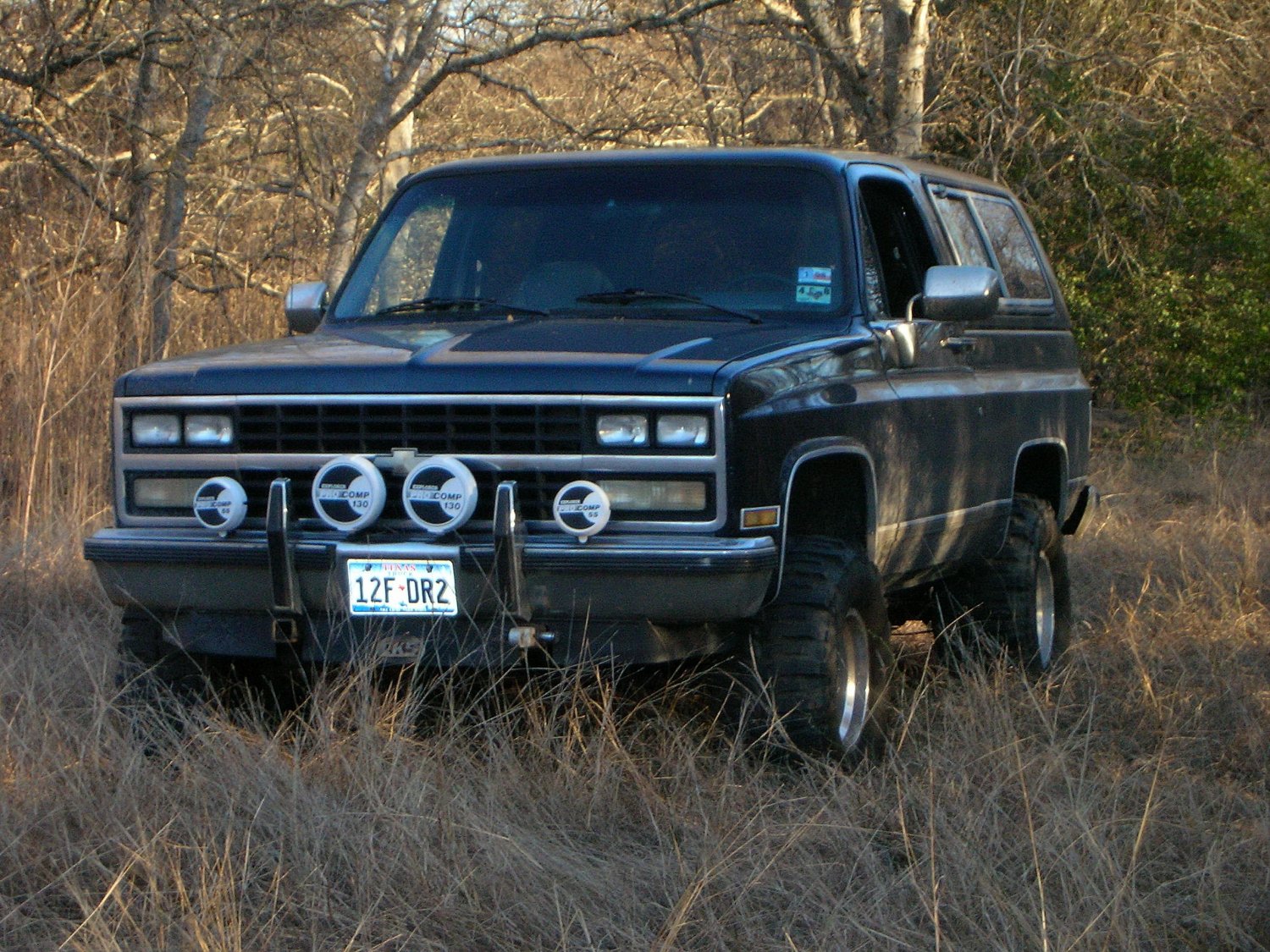 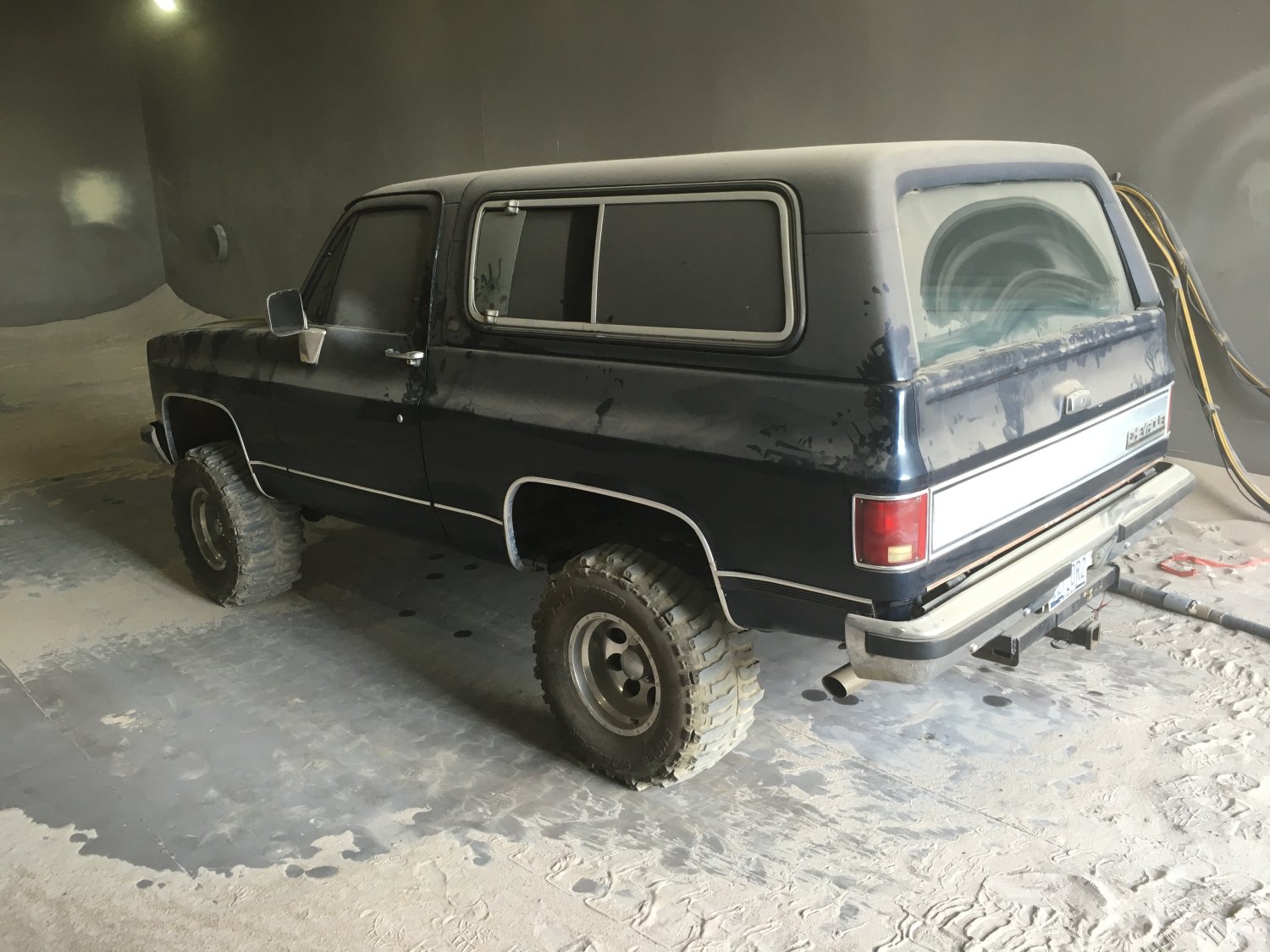 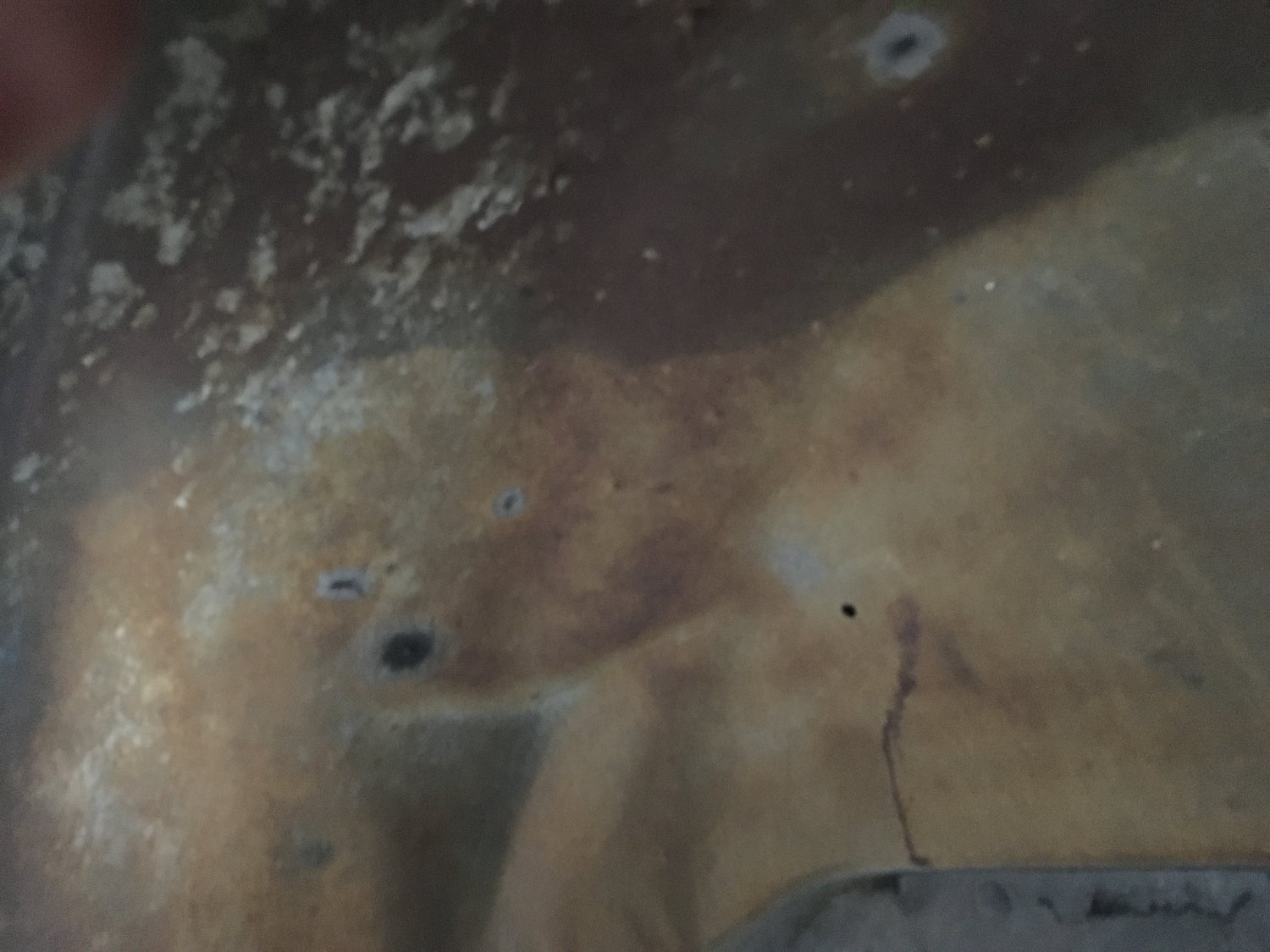 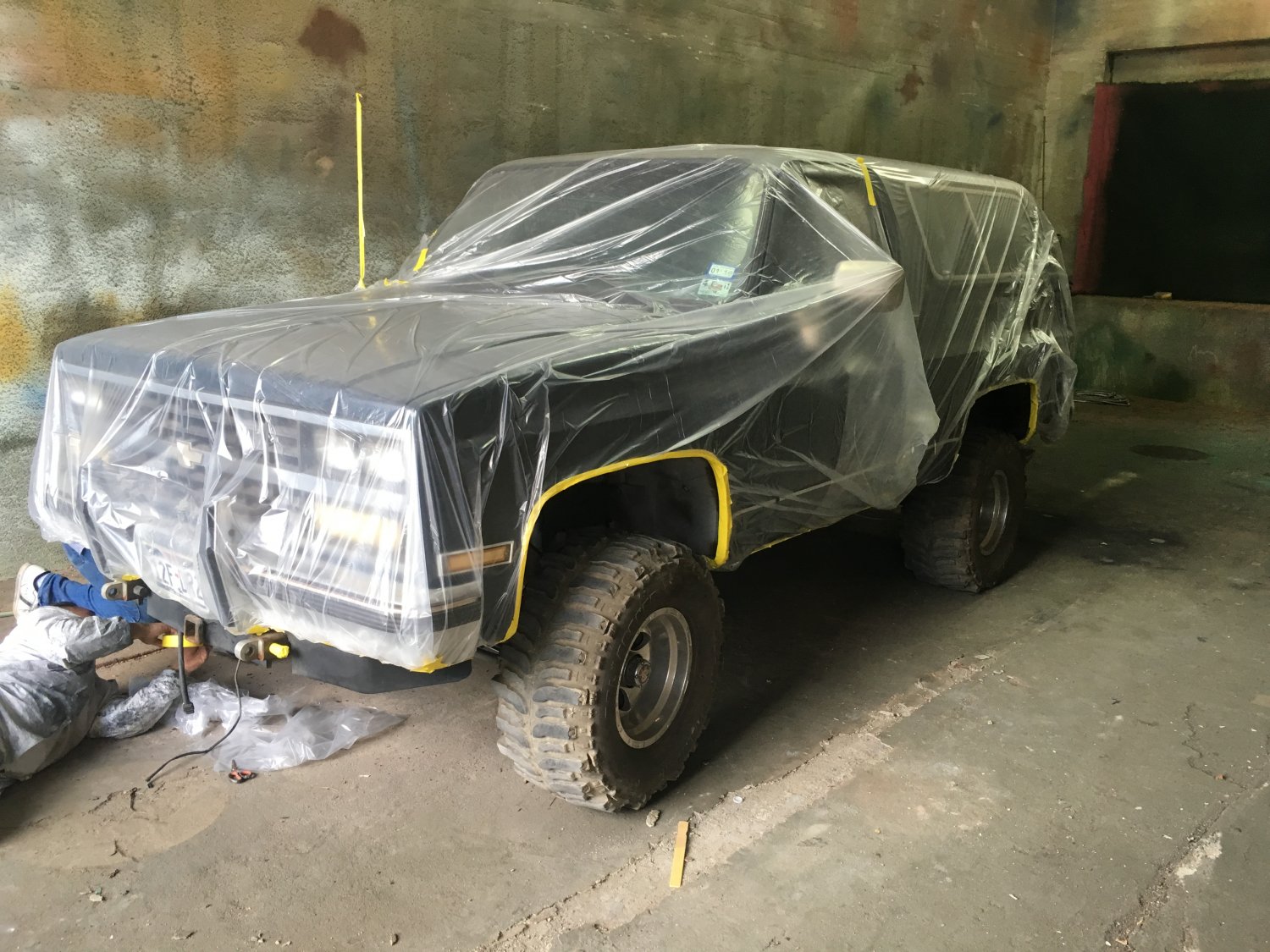 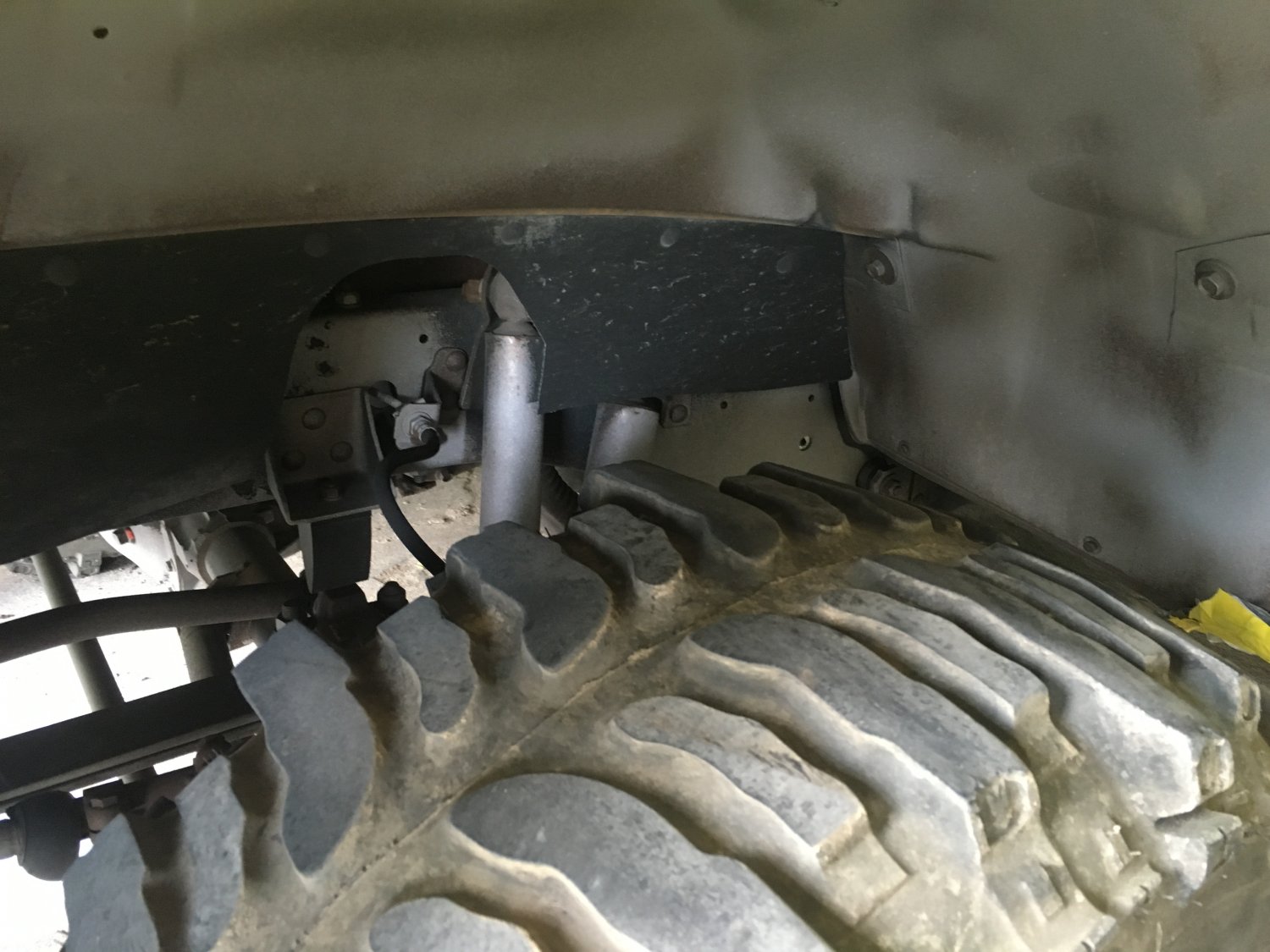 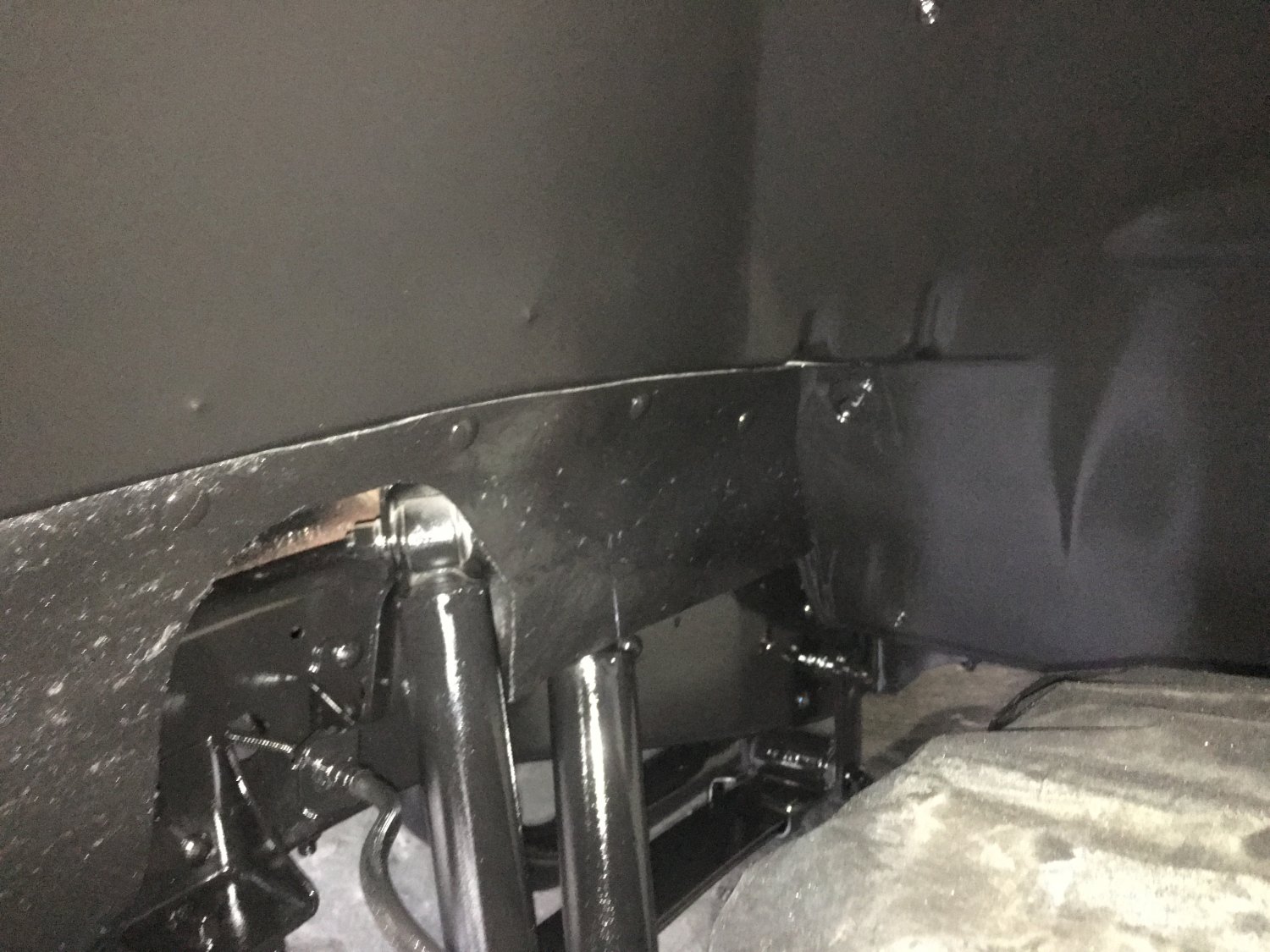 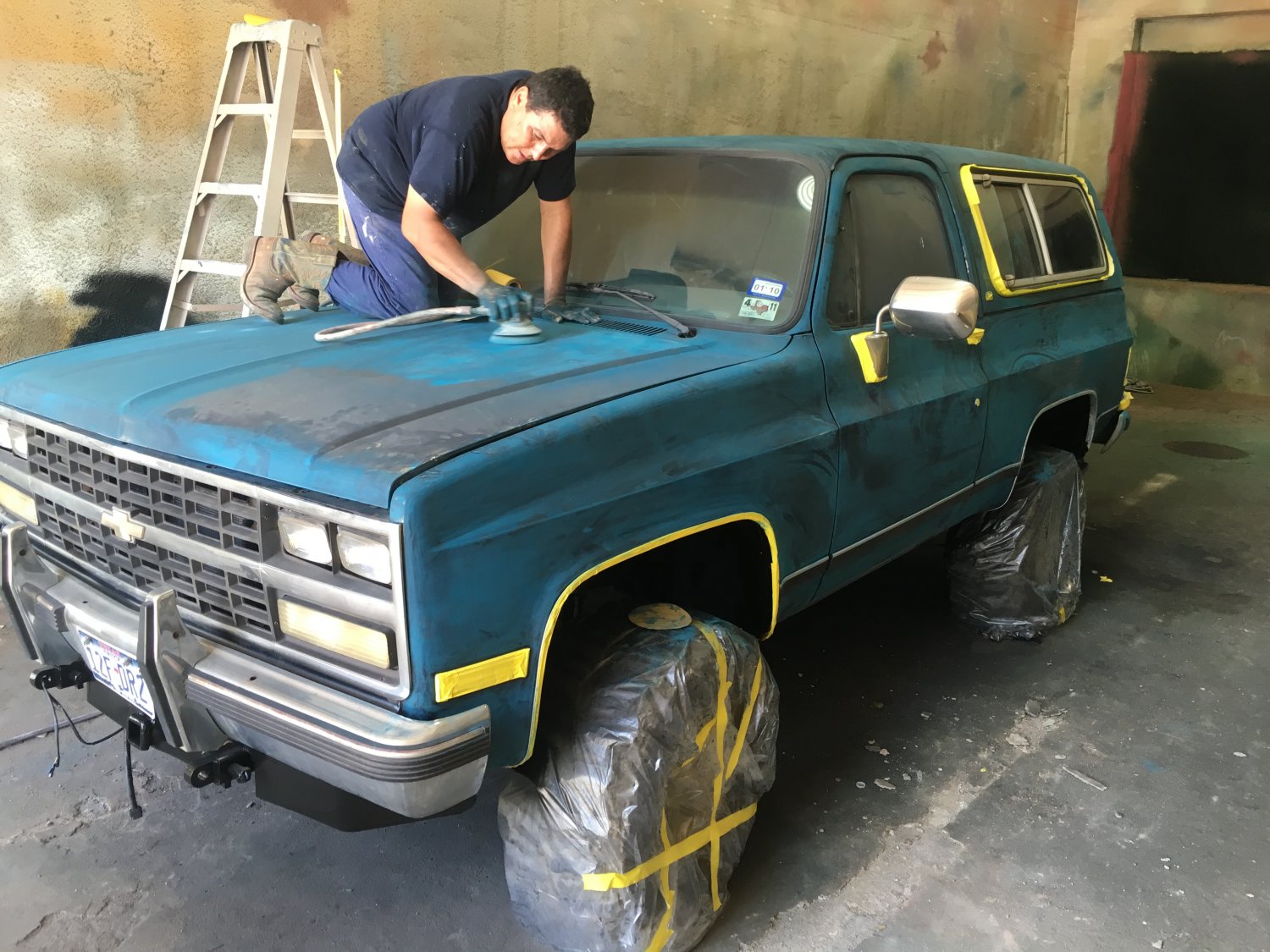 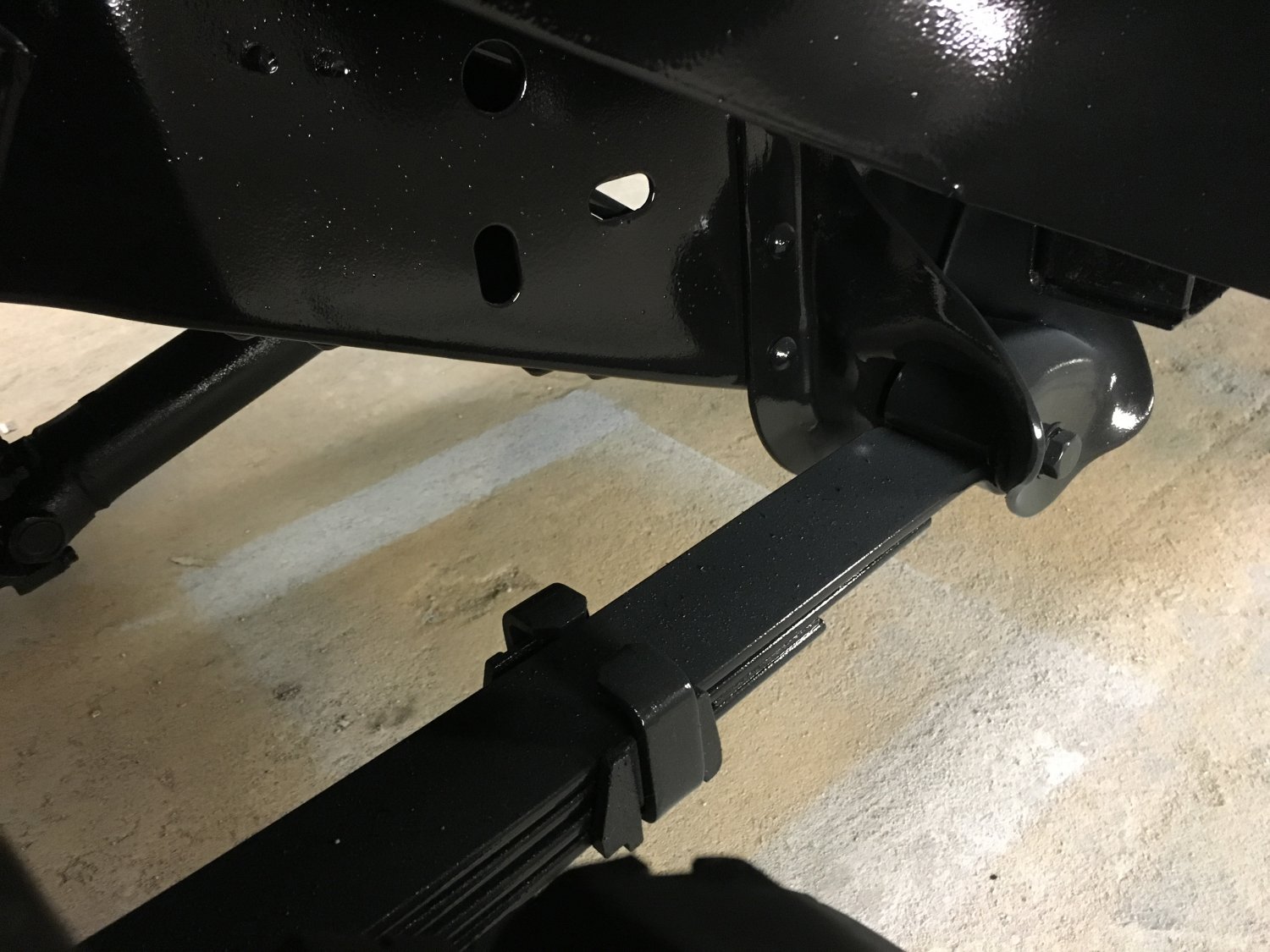 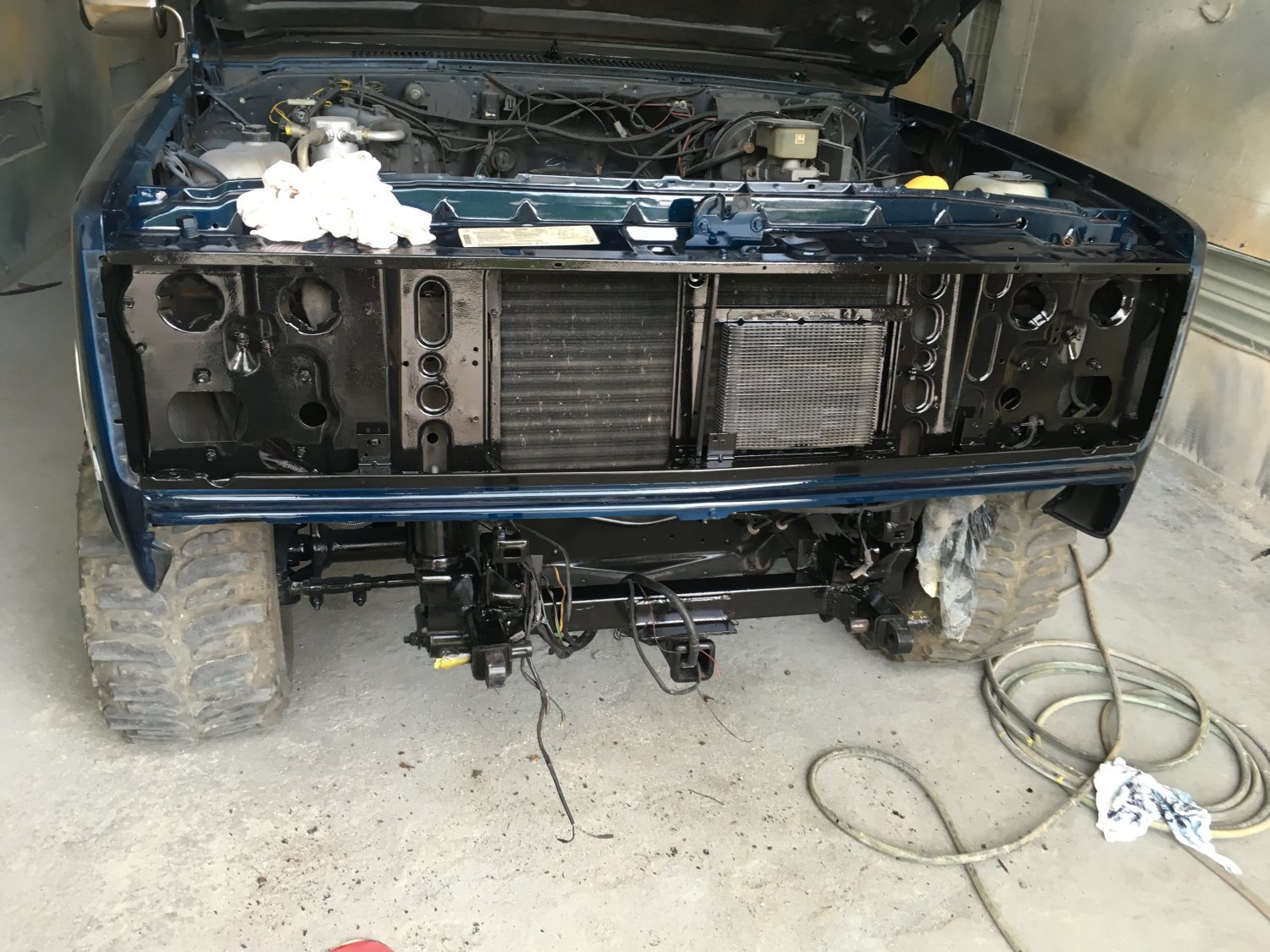 More from The Butcher 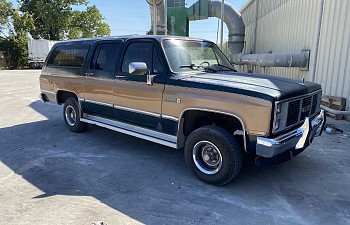 I picked this up about 10-11 years ago from the same guy I bought my K5 from. It had been sitting for awhile at his place, and it has sat in various places since I picked it up. The day I got it we did get it running, and I actually drove it up on the trailer that I towed it home on. It sat at my wife's dad's shop for several years until he needed it gone, and then it sat at one of my employee's house for awhile, and she said her husband could get it running. I got a call a couple of...

Added by
The Butcher