Butch the Jack of All Trades(Master of none)

Follow my build up of my 86 K5 for daily driver, crawler, adventurer, camper, and eye candy.

I had been searching for a K5 blazer ever since I saw my first one while I was in high school saw one on craigslist local to me. I went to look at it and found out it was a total pile (didn't even bother to test drive it). Fast forward 4 years, 1 k10 restoration, 2 other vehicles, and a lot of K5 searching later. I was surfing craigslist as I normally do and happened across this 86 K5 posted just south of Duluth, MN. Description said it was from Arizona and if the pictures were correct it appeared to be immaculate (short of a few scratches). I called the owner immediately and after some talking he revealed he had just had it shipped up from Arizona the previous winter(in an enclosed trailer I might add). I spoke for it instantly over the phone and told him I would be there the following Saturday to pick it up. He took me at my word and even took the advertisement down! Not something you encounter too much when purchasing vehicles online... Could barely focus at work all week and drove down with my dad that next Friday to get it(about 5 hour drive). Turns out he was exactly true to his word and the Blazer was 100% rust free. It had a rod knock that he had openly told me about and the interior wasn't perfect but who cares. I had a K5 in my possession and I knew I could make it into what I wanted it to be. We loaded up and paid him then preceded to walk around his tiny farm in the middle of nowhere. He had several other very cool vehicles on the property that had me drooling including a restored, perfect 69 shortbox with all original equipment still there, a 87 c10 with 38,000 original miles, and a 71 k20 that looks like it just had been driven off the showroom floor. As cool as it was I knew I had to leave eventually and we headed back to Fargo with my perfect K5 in tow.

This all happened in August of 2017 and the Blazer has progressed a lot since then. Some people might not like where I have taken it but the build has been several years in the making and I would do it all again. I will use this thread to document all that I have done or continue to do and hopefully someone will get some useful information out of it. So follow along or don't but I will continue to post. Thanks.

Interior
Factory except for some small enhancements by me

Suspension
Stock except for some generic shocks 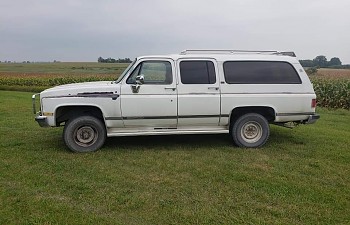 Follow along as I continue to modify/improve my 1991 v2500 GMC Sub with a L96 and factory 4l80e for daily driver/weekend duties.