Mini bulldozer with mini backhoe: Video, with my dad!

Friends and family look at me funny when I say we're building a mini bulldozer in our shed. Because, apparently, this is not something normal people do. Seems perfectly reasonable to me

As a bit of background, I've been wanting A Project for some time. Not a life-long project like another Blazer (been there, done that), but a build-from-the-ground-up something. I considered a kit car, but I'm too old and fat to fit in the damn things, and we have enough cars already. The kid wanted a hovercraft (which would be epic, as I could name it Full Of Eels and go around saying "My hovercraft is Full Of Eels") but we don't have a ton of water places on which to run it. I've also really wanted to build a big scale RC model tank for years, but that's more of a life-long project and I don't have the OCD for accurate modelling. And so on and so forth.

But then I _do_ have occasional need (*) for work around the property, so the idea of a farm implement sort of thing came to mind.

* "Need" vs "want" is relative. You guys know how this works.

I also wanted to teach my stepson basic shop skills, some welding and fabrication stuff, and have him make himself useful after graduation until he got a job. Maybe he'd decide he enjoys metal working, maybe he'd decide not, but it'd give him some guidance, and cut down on my chiropractic visits

In the end I decided a tracked implement/machine could be handy, would be fun to build, and would be *kinda* like a tank. I went Googling, didn't find much in terms of kits or really detailed info, but did find one guy who sells plans with some parts pre-cut. Took a while to get all the parts (he's in Canada, so the cross-border stuff was a killer), but eventually we got all the parts, and found excuses to buy more tools, and cut and welded a shit ton of stuff, and several months later, here's the final result: 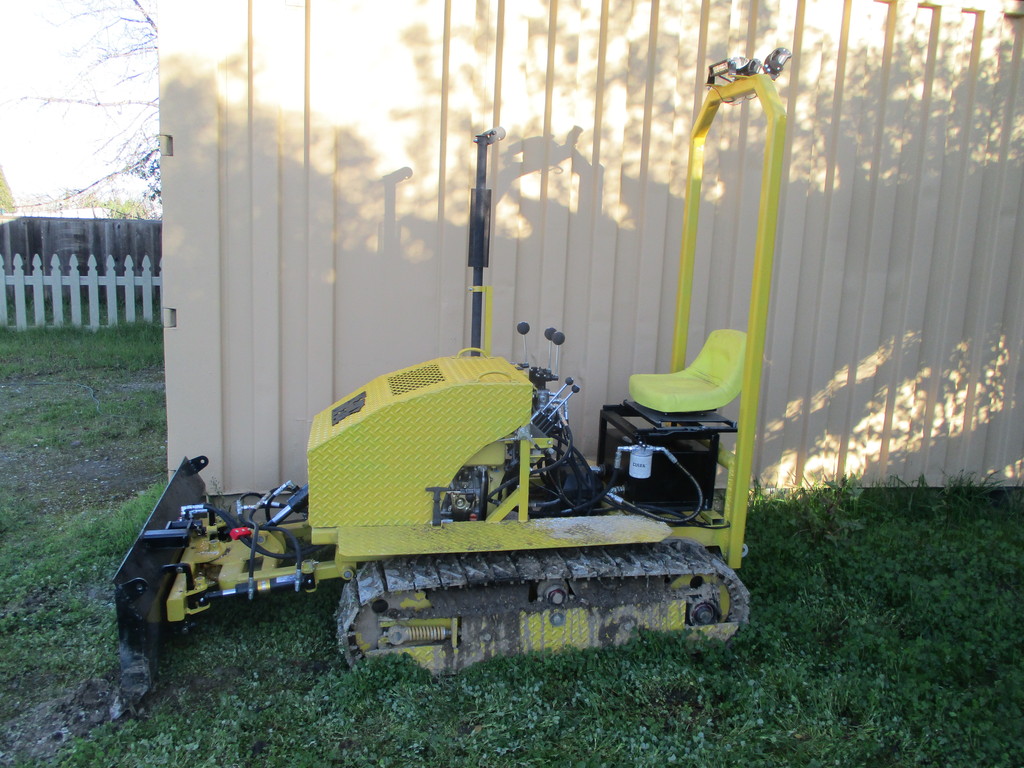 That's said teenager, not me. Somewhere along the thread you'll see the tubby redhead, fear not.

As with my other threads, it'll be pic-heavy with commentary that makes me laugh. It may not amuse you, might just make you think I'm crazy. Hell, I built a fricken bulldozer for my garden

Where I've had good vendors, I'll try to point them out, at least by name if not a full URL. Feel free to post or PM for more detail on any given experience. 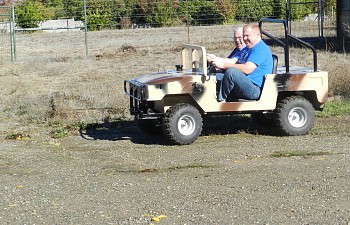 I've always wanted a HMMWV (the military Humvee, like the consumer Hummers but even less comfortable.) After careful consideration, however, I concluded that if I wanted an oversize topless impractical vehicle on large tires with GM powertrain better suited as a conversation piece than a daily driver, I could just as well have a Blazer. Which, coincidentally, I already do. :doah: And even after finishing my mini bulldozer-backhoe, I find I enjoy building small things. As you'll see later...

from stock to smurf, in seventy-two easy (ha!) steps, plus some commentary on the life decisions I've made, often poor ones. Including four houses and three marriages. :doah: There will be some storytelling and some photopimping. I don't discuss the basics -- you should know a grade 5 from a grade 8 bolt -- but I don't claim to be an expert fabricator either. I just like to weld, so I build things. Sometimes they even work! Here on CK5 we have all kinds of builds: stock trucks, resto-mods...