This truck has been a part of my life since I was 16. Same year I first became a member here (I think Junior year of high school) , Finally decided to start a build thread on it,.....
My best friend in high school and I had blazers, mine was an 85, this was his. In fall 2001 found this 79 Cheyenne in a thrifty nickel paper ad and drove 3 hours to Albuquerque to get it, (as a kid my stepdad had square bodies and always been in love and was hell bent on having a blazer as my first truck). My friend and I would spend weekdays after school workin and learning about our blazers, then spend the weekends having fun and breaking them. Lol. We learned a lot..... Started with a 350 sbc, then after shooting a rod straight out the oil pan,....was able to get a crate 305 and learned how to swap a motor at the age of 16 on our own. During high school, we pulled the TH350 trans and installed a SM465 and pedals from a parts truck, saved cash and got a skyjacker 6” lift (after drooling over it long enough in the 4 wheel parts magazines) as well as 35” tires and new wheels from a local tire shop. Both of the blazers we had were looking pretty cool in the high school parking lot. Ha!
Moving along , ...... ...right after high school my good friend had, we’ll say, some hard times and was making poor decisions...... I got him to sell it to me. Had it for a little while Ended up having to sell it in 2004 (new baby comin, needed down payment for reliable truck)...local guy bought it, did some things here and there and always made me sad to see it driving around town. Tried to buy it back and he wanted double what I sold it to him for.
Well I went through divorce cpl
Years later and was forced to sell my 85 to pay bills I was left with and was full of regret and misery......So fast forward to fall 2016, saw it for sale on used car lot off the highway,....he was moving to Florida and couldn’t take it with him. Score!!! Like it was meant to be!! Called him up and he Gave me a good deal and I got her back!!
I’ll never let her go again!!! I plan to pass this on to my son (if and when I ever get to a point I can’t drive it of course!) my kids instantly felt my love for it and we have been enjoying it ever since!! Even taught my daughter and stepson how to drive standard in the blazer.

since getting her back,....
Hydro clutch conversion and swapped pedals after having to replace clutch. Power washed, wirewheeled, painted and replaced gaskets and bearings in 465 and 205. Fixed a lot of wiring (started smoking under the hood one day at the drive thru window)
Added some headers and a 2.5” flowmaster exhaust.
Got a softtopper from a member here and still haven’t installed yet.
been slowly acquiring parts to redo suspension and 1 ton axle swap.

my plans for this blazer is to have an all around capable rig. We live in the mountains, snows a lot in the winter, lots of trails to explore. I wanna be able to take the family out on camping trips and be reliable and confident we will get through whatever we need to, as well as, doing some stupid stuff dads do to impress the kiddos.
I finally made a deal on a D60/14B after a year of giving the guy offers on a parts truck he had.
March 2019, new clutch installed in ‘17 went out and since tranny has to come down, I figure “why not start the 1 ton upgrade? and maybe even replace the stiff dump truck riding lift kit and completely redo the suspension”
while it’s down, I want to do the axle swap, maybe disk brakes in the rear.
I love the look of the H1 wheels and found a couple sets in last year or so to clean up and put on with a new set of 37” MTRs.
there’s buncha smaller things and more time consuming things I will as it’s down like,...clean up frame and underbody and paint or undercoat, get a frame repair kit from ORD for the steering box, replace body bushings and do 1” BL. Jeep steering shaft upgrade, and I’m sure there will be a lot more to come.
future plans are to do a 6.0 swap and get rid of carb. I’d also like to build some bumpers too.
So I know it’s gonna be sitting a while as I find time between my kids sports, work, and life. But determined to get it back on the road! have really appreciated all the help over the years from everyone here and this site has been my “go-to” and the reason why I know as much as I do about square bodies. I’ve had quite a few Squares over the years but nothin can compare to this blazer. I know I’ll never see my 85 again (somewhere in west TX) and Being that this was my best friends truck, basically both of ours as we both had equal blood sweat and tears between the two blazers, makes it pretty special. Thanks for checking out my build! Feel free to comment and let me know what you think. 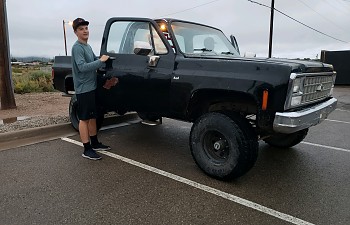 1980 K10 fixing up for my stepsons first truck or first love?