So it seems to be the new thing here at CK5 so I have been putting pics in an album for some time now and decided that I would do one on my truck as well. I bought my Blazer in 2001 and I am the second owner. When I bought it there was literally nothing wrong with it. Perfect body and interior. Ran and drove great. I got 21 MPG with it on the first long trip i took with it

Looking back i would get a different one to build, but can't undo it now.

The day i got it home. Coincidentally the same day my youngest son was born 2 years later. 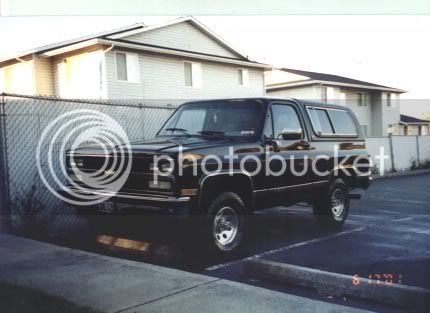 This was fine for awhile and we did some family camping trips in it and some day trips into the cascades. I joined CK5 around this time too, but it wasn't anything like now. So I opted for the ever popular 4" Springs and some 33x12.50 tires on 15x10 MT Classic II's Ran around this way for quite awhile and the truck did pretty good with 33's. Found a guy selling some 36" TSL Radials for $200 so I picked them up. The were the most out of round non balanced tires ever, but they worked great in the dirt. Did my first fender trimming at this point along with zero rates. 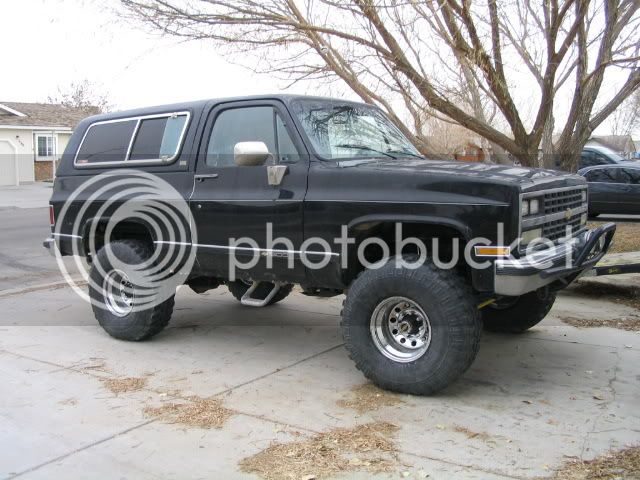 Went on a short detachment to Key West for work and when I came home I had an awesome Fathers Day gift. Now I had to come up with a mount. Limited budget so i figured i would make one. Bought a chunk of 1/4" plate and some cut off wheels. tedious, but it was all I had. I didn't like how it angled up with the frame rails so I had a small bend put it. Boxed the sides and the bottom and welded it up. My first real home fab project and it turned out great. Worked even better, and was a great mod to have.

Now now being able to turn off road when I was flexed started to get old. Ordered up some goodies from Sky. Got some flat tops from an old Waggy and had them milled and drilled. No more steering problems plus it drove 100% better on the road. Lost the swaybar sometime around here too.

Sometime around the same time my wife was fed up with my old square swampers. So I got some new ones. 37x12.50 SSR's I realized yesterday reading through threads that I never did create one for my new 1990 V1500 Blazer I bought a few months ago. I touched on it a bit in my 82 crew thread https://ck5.com/forums/threads/82-k30-3-3-build-direction-unknown.322206/ but didn't expand much. Focus on this build will be maintaining a "stockish" rig with a focus on upgrading the ride, drive, and comfort of the rig.

So I picked up another crew cab this week. Well I didn't but my buddy picked it up for me. I am still on deployment. Saw the CL add and just couldn't pass it up. 1982 K30 crew. 350/TH400/205 Dana 60 and 14 bolt. Paint is rough, but body is straight except the tailgate and some surface rust. Lower trim level. I have no idea what to do with this truck. I bought it because it was cheap so I figured I would make a poll and see. 1. Crew Cab short box, motor swap and just be a nice truck...

This really won't be much of a build. More of just documentation. The truck needs very little. The only plans I have a a set of Rally wheels for now.

The White truck as my kids refer to it although at the time the Blazer was the only other vehicle I had so not sure why we refer to it by its color :dunno: Got this truck in Mar of 2006 from a member here and he got it from a previous Norcal member. I had been searching hi and low for a truck like this. Got lucky as this one has the big block and Silverado trim and had less than 100k on it. Figured I would start another thread and not clutter up my Blazer thread. Specs are 454/TH400/205...