My stepson has expressed a lot of interest in square bodies after plenty of 4 wheeling and campin trips in my blazer over the years (The funny thing is...his dad could honestly buy him any truck he wanted, but he wants an old Chevy, which I thought was pretty awesome). I been lookin for somethin to bond with him and use as a tool to keep him doing good in school, as a stepdad, I have limited use of my belt with him, unlike my own kiddos. Hahaha.
I decided to find an old Chevy that I could use to get him attached to, and use it to “motivate” his good grades and following rules at home. I came across this gem on CL.
Got a pretty good deal on this. The owner had no clue what he had. He had just got it in a deal on another trade. And he needed cash. It was really dirty, interior is in good shape. Just faded. But Engine sounded great, had lots of power and drove smooth.... 4x4 knocked while engaged and had an exhaust leak (which aided in my haggling skills. Lol) 33” tires had tons of tread, but cracking. Solid truck, but still needed a few things. My stepson went with me not knowing it would be his truck. Lol. Had an adventure bringing it home. Here’s a link to my other thread. I wasn’t sure if I could change my thread to a “build thread”.

Well, that was back in October and tonight was finally the night we drove it out of the garage and went for first test run. Which was a Success!!


I guess I will post all the pics I have of the progress, since I had been posting along the way. Lol. Only able to work on it here and there after work some days, or on weekends. Between this and tryin to get my newly remodeled bathroom finished up,....been crazy for sure.
But it’s almost ready to be a DD.....

Want to make sure it’s reliable for school and at the same time, teaching my stepson life skills.

Started with rear axle, replaced all the wheel studs and seals.
Moving up the driveline, noticed that the tailhousing for the 205 was busted up. Come to find out, tailhousings on a 205 aren’t that common, but thanks to Sweetk30, he got me goin! Thanks.
Moved to next item, replacing trans filter and gasket, then noticed lines were shot,...ordered new lines and replaced.
Found the cause for knocking in 4x4,....driveshaft was barely attached maybe an inch in the yoke and pinion bearings worn out.
Removed front axle and My stepsons dad had one of his mechanics rebuild it for us.
While removing leaf springs, noticed they were in backwards (which explains why driveshaft was too short) and had a mix of poly and rubber bushings. Had hell replacing the bushings and making new sleeves for one side.
Wire wheeled all the suspension and components and painted black.
Started on motor while waiting for axle to come back.
Replaced all the top end gaskets and header gaskets. New plugs. New power steering pump and lines.
Fix hanging exhaust.
Axle still not back yet after cpl weeks, moved to interior. Lol.
Changed out heater core.
Installed a choke cable, took dash apart to install new stereo and speakers. Ordered some 6x9 rear speaker brackets to replace old ones.
Found a good dash bezel and steering wheel from junk yard.
New carpet kit from Rock Auto.
Ordered new seatbelts, carpet trim, pedal pads, door locks from LMC.
Finally after front axle came back, installed it with all new balljoints, seals, bearings, and spindles.
Had to replace all the brake lines, previous owner installed the lift with factory brake lines.
Felt good to set the truck back down on its own weight and take it on its first test run tonight after months in the garage!!
Still have to finish up trim and put fender wells back in, but just nice to get it on the road.
Next issue to tackle the fuel system. Has dual tanks but selector valve is bypassed and hoses are crusty.
I think we may do a body lift to replace the worn out bushings as well.

Well, that’s what we been doin last few months,....more to come. 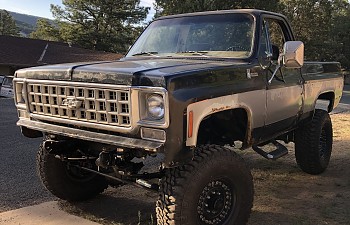