We all have a disease. At least Im in good company of others with the disease. The first thing the wife said when I went to buy this truck was "This isnt gonna be another thing you sink a **** load of money into is it?" I gave her a boldface lie of a NO! right to her face and she knew it too. Only reason Im getting away with it is cause she likes the thing

So Ive spoken of it on here but never really elaborated. I bought a 90% done project from a guy on craigslist. Specs as follows:

Originally was a 1994 GMC sierra C1500 standard cab shortbed 2wd. Base model with a 4.3 and 5 speed. So the guy I bought it from gets his hands on it and does a lot of decent work to it. Paints the frame, straightens the body out, primes it, and most importantly throws a VERY health 355 in it. 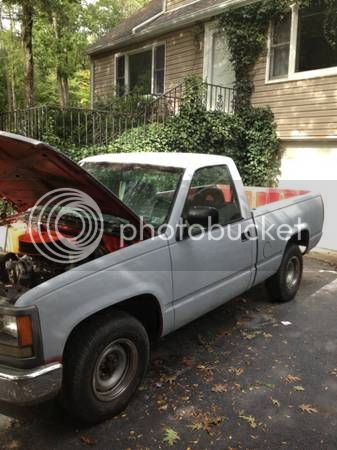 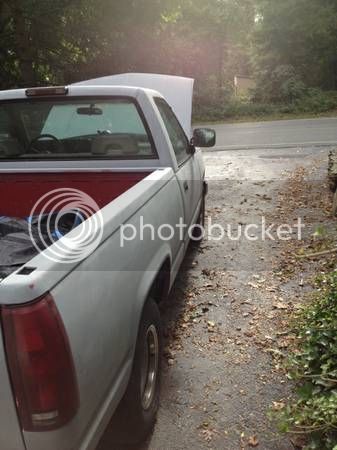 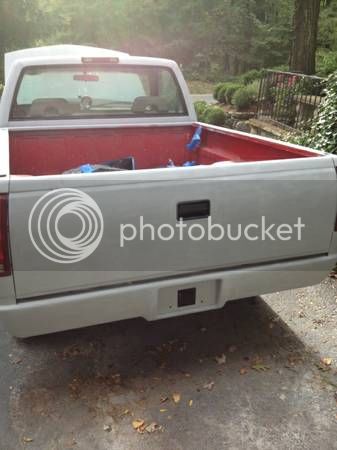 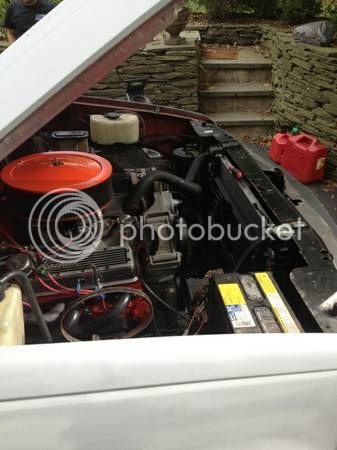 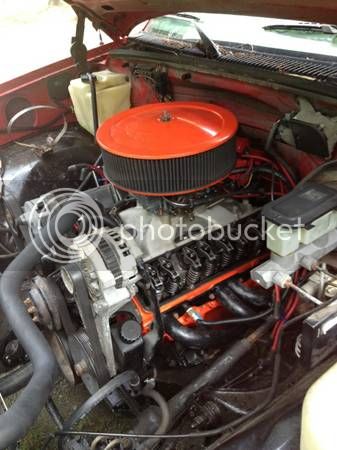 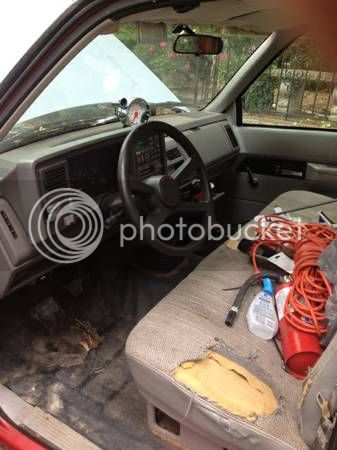 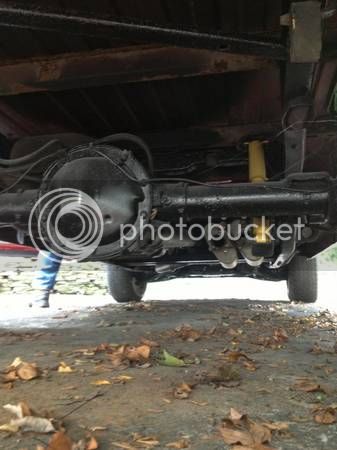 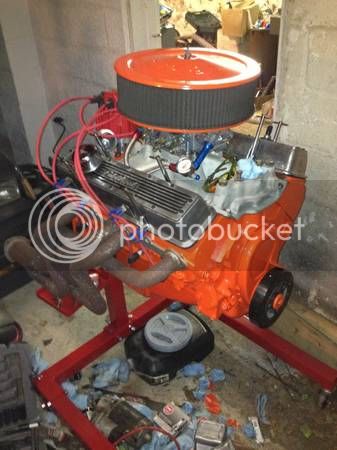 So I basically have a chat with the guy about some things he rushed that he felt needed to be fixed up. He was a nice knowledgeable guy, not much of a welder though. So he says to me he really rushed welding the pass side motor mount and I should redo it. I take a peak and wholeheartedly agree. So I get half an hour into the drive and everything is running great. Entrance ramp to rt80 and I feel the urge to give it the gas.

Break the mount off at 4000rpm in second gear.

Well the sudden jar of breaking loose tore the motor off the trans and broke the bellhousing and threw the rear u joint from the ****ed up angle. So I didnt see the broken bell in the pitch black and figured I just broke a u joint. I run to the store w/ my wife, get a u joint and tools and change it on the side of the highway. Get down the road a mile and it throws the u joint again. So I threw it in and limped it into a gas station and came and got it with my buddies trailer the next day.

So I fix the motor mount, the welds were so bad I tapped the snot off the mount with a hammer and punch, and continue looking the truck over. Thats when I see daylight through the top of my bellhousing when I take the inspection cover off....

To shorten the story my friend had an earlier NV3500 laying around his garage. So I throw that in and fix the u joint again. Put a new clutch master and slave in it and get it back on the road. It was plagued with electrical issues from things not even being hooked up so I get that 90% fixed up, run some heater lines and start having evil thoughts in my head.

The trans in my truck doesnt belong to me so my first thought is to replace it with something better. T56 6 speed sounds about right from an F body. Its actually the cheapest thing to run strength wise. The other nice thing is the .50 2nd over drive will let me run 4.56s and cruise at 80mph at 1900 rpms. So thats the first thing on my list for this truck besides what Ive done already. I need an LS1 style t56 core which I found one for $600ish and am going to try to get the approval to buy this weekend. I can send it out to Tick Performance (like the T56 gods) and have it rebuilt with a shifter relocation kit for the truck floor for $1000 shipped each way included. They upgrade everything to be good for 450rwftlbs. Then I just need a Lakewood bellhousing with the different depth to adapt the LS style trans to a small block.

I could have gone with an LT1 trans and it would have bolted right up but I figure a little for site will save me an input shaft AND bell swap down the road when I switch to an LS motor.

As far as the mill thats in it now its a 355ci, 10:1, Dart Iron Eagle 200cc Intake Runners, Exact cam specs I dont know but its fairly lumpy. When i bought it it was topped off with a Victor JR (blick on the road) and was utterly gutless below 3200RPMs. I switched it out for a tall model Air Gap last night with a 2in carb spacer. I picked up my power band 800rpms lower, lost nothing up top, got way better fuel metering read for the carb from the dual plane (no more aggressive bucking and lurching at lower rpms cruising when off the gas), and gained a **** ton of driveability. Guy I bought it from said it was about 385hp and ran a 12.8 in his stock 69 camaro with a bone stock qjet, **** rear end gears, no posi, and a stock torque converter. So I would think its got a lot more in it.

Obviously Ive got loads of plans for the thing. Im gonna plastidip it gun metal grey and do a 2in cowl hood in flat black and tailgate in flat black to emulate the old muscle car berger panels.

I havent given up on the Trooper but its so nice to have something I can just tinker with again, finish what I did, and jump in and see what difference it made and drive... 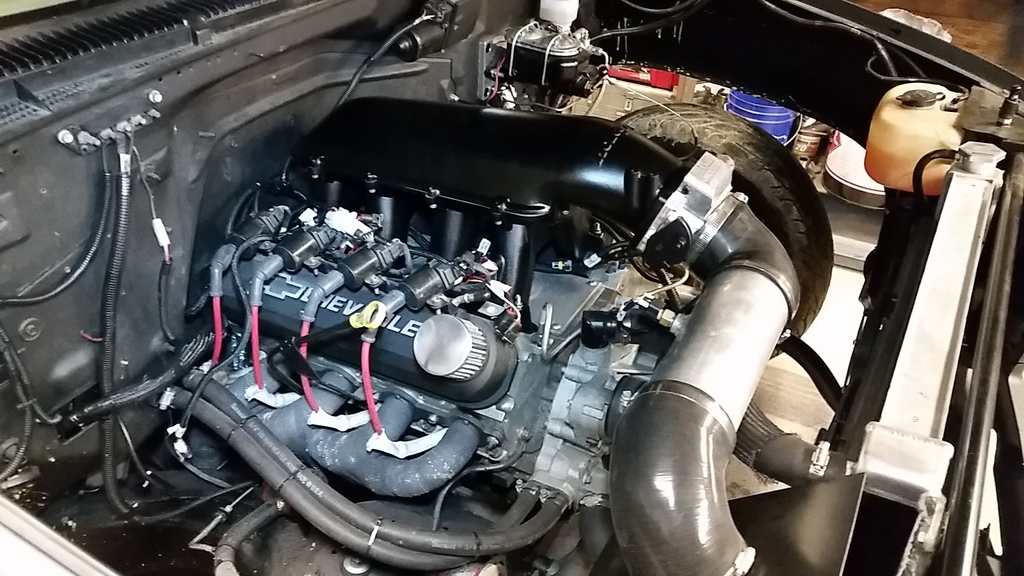 Im like a damn clown juggling projects here. So tonight I brought home an s10. I couldnt pass it up. The guy did full rockers and cab corners with pictures to prove he did it the right way. Plus a fresh door, fresh front clip, new core support, and a clean bed to donate to my buddy for his s10 street rod. It came home for $600 with 335k on the clock and a 4.3 motor I refuse to believe has that many miles on it. This all started with this today. Then I went and bought this for $600...

So despite my numerous endless projects Im taking on another vehicle. Not really because I want to, Ok I lied I do want it, but because I need it. For the past week Ive been doing heavy equipment welding/fab repair. It started out as a temporary one day thing working for a friend and kind of unfolded into picking up a very big repeat customer once they saw our work and drive to make some dough. Needless to say because my friend is so busy and I was doing 90% of the work he brought me in as a...

Other
Pzuzu The Isuzu Build (RIP)

So finally after all the chatter I made a move on a new truck. My daily driver (1999 Stratus) is not long for this world. Water pump went on me the other day, car over heated, gauge didnt lead on to how bad it actually over heated and the head gasket cracked. Got lots of nice oil boogers in the radiator and its just not worth fixing. So onto craigslist I went. 24hrs later I brought home a 1994 isuzu trooper with a 3.2L v6, 5 speed, 4wd, Isuzu 12bolt rear w/ 185,000 miles for $900. Shes up...

Well someone requested some pictures of the bed I'm working on in the tool shed. IMO its going slow but coming out really well. Heres a day and a half of work. Theres also a crappy pic of how my welds are coming alot. A straight bead and a stitch. Could always use advice on how to improve to please critique.