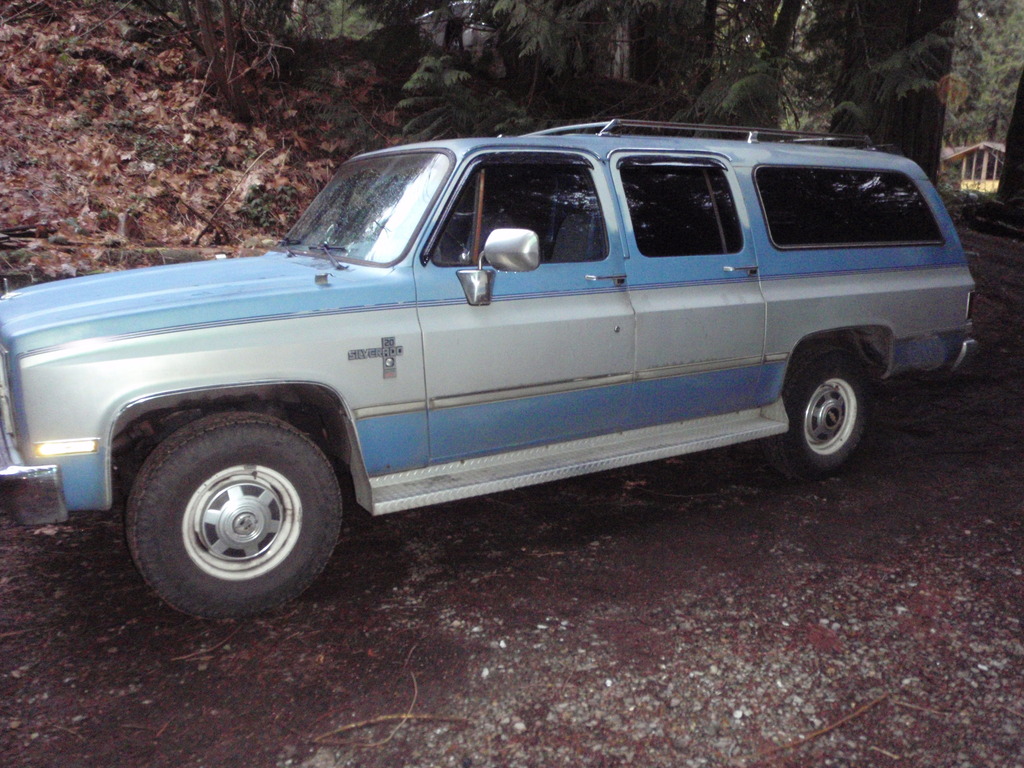 I have permission from Rick Siemen http://articles.superhunky.com/bio/Rick Sieman to post articles he wrote in the 80s called the Wanderers. I highly recommend buying the CD from him (he's a crusty, old guy but pretty cool as well) for all important occasions - bar mizpahs, weddings, funerals, or as a present to yourself. Interspersed through this thread, I'll post up his stories. The entire concept - traveling around in a Suburban with all the comforts of home appeals to me - and when I was a teenager (when these were published the first time), was the other thing I dreamt of besides girls.
But first, my version of this.

1985 Suburban K20, 6.2 diesel, ATS turbo. No rust, lots of three-handed-inbred-mods, but a truck someone cared a great deal about before and totally worthy of giving it new life as my RV. My goal is great-running-condition-so-I-can-flat-tow-my-fj40 to the NW Overland Rally in June of this year. More specifically that means a rack, fixing the THIMs (aka Bubba mods), a kitchen/refrig/water tank/sink/bed inside, putting on my awning, getting the rat smell out, and hopefully having the solar system in place.

I do simulcast the bones of these posts, so you will see similar posts on other sites - I do tend to tweak them for the site it's being posted on..... without further ado, pictures are the next post.

Suspension
Rugged something soft something

Paint
it has some, some has blown off.

I'm a fan of Overlanding, but think the tea and crumpet crowd need a dose of American. So this has all the typical, hot water, cold water, memory foam bed, propane for cooking and heating, solar for being environmentally conscious, big ass batteries so I can run house a/c with the motor off for several hours. If not, a propane powered generator will complete the kitting out. I might even add a snorkel, because, well, it's not overland without a snorkel. All of this is contained is a vehicle that shouts 'Murica! and gets better fuel economy then their pigs. There is much joking - but seriously, this fits the way I camp and play outdoors. I need a place to keep the bears away until morning, but once sleep is done, it's time to play outside - otherwise, I'd just stay home. Thus, no kitchenette, no TV, no DVD, just remote camping in American style.
Share:
Facebook Twitter Reddit Pinterest Tumblr WhatsApp Email Share Link