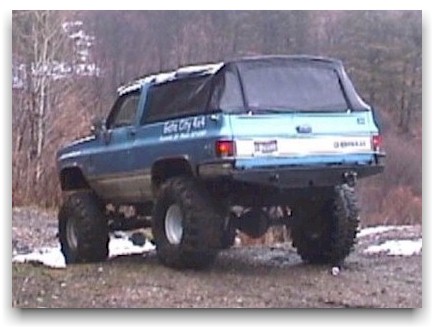 4x4 Iron Rear Bumper
​
Some of the most useful tools that you can have on your 4x4 can be the bumpers. They can provide protection for the body, a safe place to use for a high-lift jack, a spot to hook up a strap, and finally, a place to stand on. The stock Blazer bumper and in a lesser way the stock truck bumper is not up to the task at all.

4x4 Iron had all the answers I needed. They offer a few different options in rear bumpers and opted to go with the rear tube bumper with the optional side armor. Since I planned on tractor pulls in the future, I also had them install the optional receiver hitch.

Shortly after I made my request, Tim from 4x4 Iron called me up and had me take some measurements. There can be many different factors that affect how these bumpers will fit onto a vehicle. Some of things that needed to take into consideration, was the fact that I had already cut my frame back some and I had a 3” body lift. To make use of the optional side armor, the body needed to be trimmed up behind the rear wheel. I used a sawsall and cut strait back from the wheel well opening as high as I could without cutting the floor of the bed. Tim had me make several measurements in different places and then he was off to weld up my new bumper. In the meantime, I had to get my old one off. 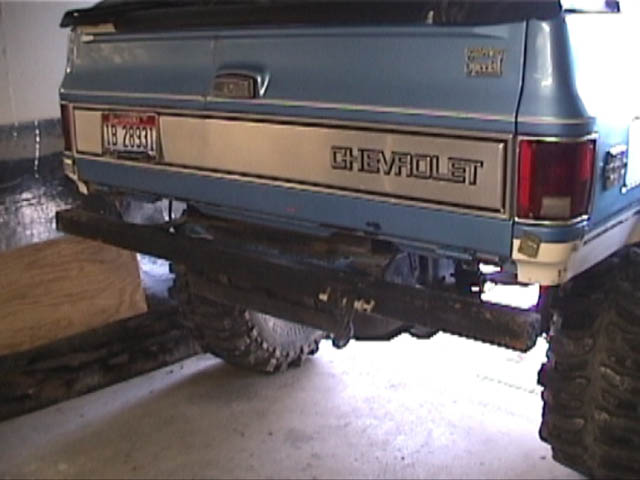 Location of wires
​
I had given up on my stock bumper several years back. With no place to hook a strap to and looking like a smiley face it was retired. I had cut the frame back several inches and welded up a 3” by 3” square tube. It worked much better but with the addition of the body lift, it was looking somewhat lame. One thing to note, cutting back the frame will cause you to loose the function the tailgate springs. This tended to make the gate heavy to open and close but it was easy to get used to. With a soft top installed, the rear window and all of the hardware can be removed making the tailgate quite a bit lighter. I would recommend cutting back the frame. This enables the bumper to be tucked in closer to the body and it looks much better anyway. Using a combination of a sawsall and a grinder, I was able to remove the old bumper. Before I could install the new bumper from 4x4 Iron, I needed to do some wiring relocating. The wire loom for the rear lights ran through some holes on the outside-rear of the frame. The brackets on the new bumper will be covering these holes up. Simply unplug the loom and reroute the wires over the top of the frame and reconnect the plugs again. I was now ready for the new bumper. 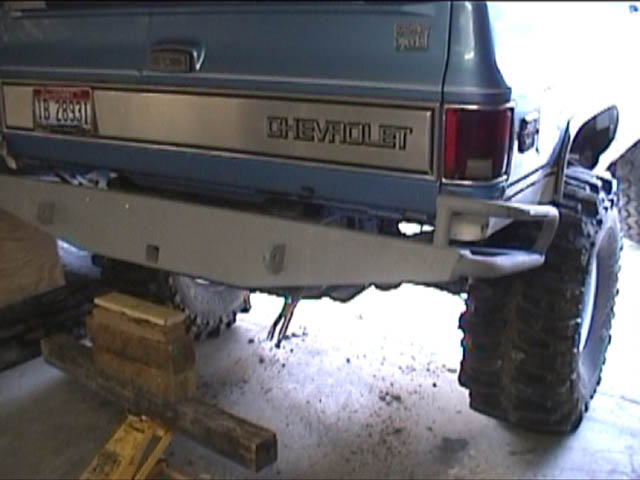 Installing new bumper
​
The bumper was pretty popular down at the shipping company where I went to pick it up. Five guys helped me load it up and thought I was going to put it on my dually! I got it home and busted it out of the packing crate and positioned it to put on. First impressions were very positive, the bumper looks strong and the welds look smooth. The receiver hitch is flush with the surface and the safety chain hooks are on the back of the bumper for a clean look. There are also two mounting points for clevises that are very beefy. The side armor has support tubes that angle back to make it very rigid. The idea was to put it on a floor jack, move it into place, and use C-clamps to hold it while I did the final positioning and whole drilling. As it turns out, the tolerances were so tight on the frame mounts; I ended up using another floor jack and a five foot piece of posting to bang it into place, then I hit a snag. 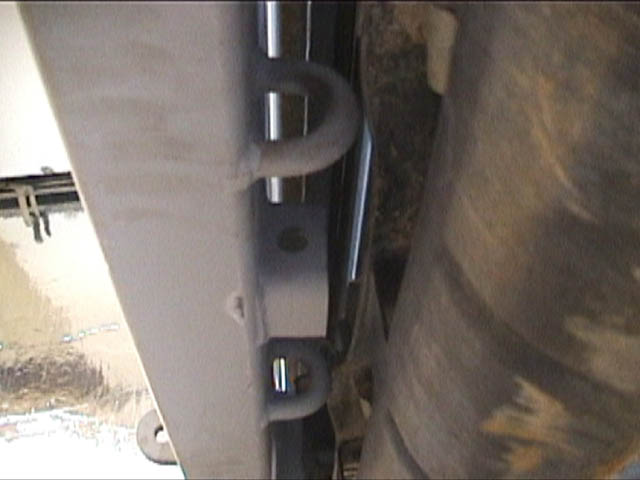 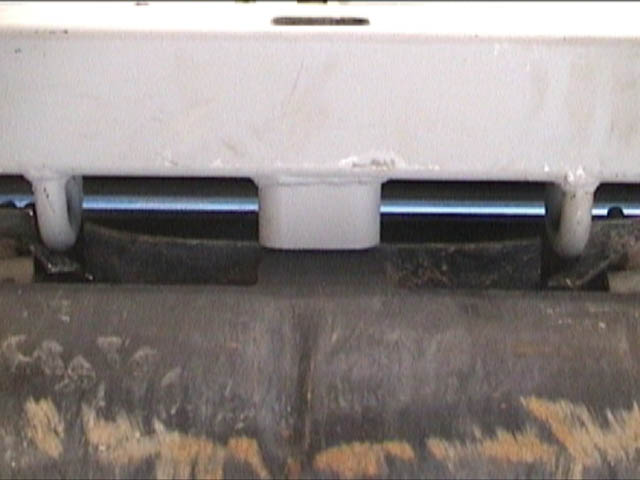 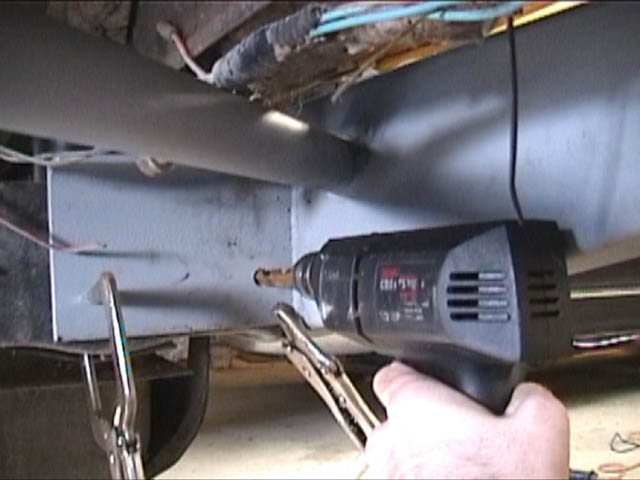 Drilling bumper brackets
​
On the back of the bumper, with the addition of the receiver hitch option, there are two loops welded so that there would be a place to connect the safety chains. These loops bumped into the crossmember that supports the rear of the gas tank. As I understand it, this was the first bumper that they had built for a 3” body lift and only an 8” drop in the center. Normally with a 10” drop or without the body lift, the loops would fit under the crossmember. With the loops hitting this, it was not quite in the position that I wanted it. To fix this, I simply took the sawsall and notched the frame on each side of the loop and bent in the notch for clearance. I was then able to slide the bumper in until the back of the receiver hitch hit the same crossmember. This was as far as I wanted to go so I called it good. I spent a lot of time placing the bumper right where I wanted it. I ended up raising it as high as I could and in as far as possible. I would have liked it to slide in a little further but that would have entailed notching the crossmember more. With it in place, I drilled two ½” holes on each side and installed the four supplied bolts and I was done. After painting it black, I was ready for the test drive! 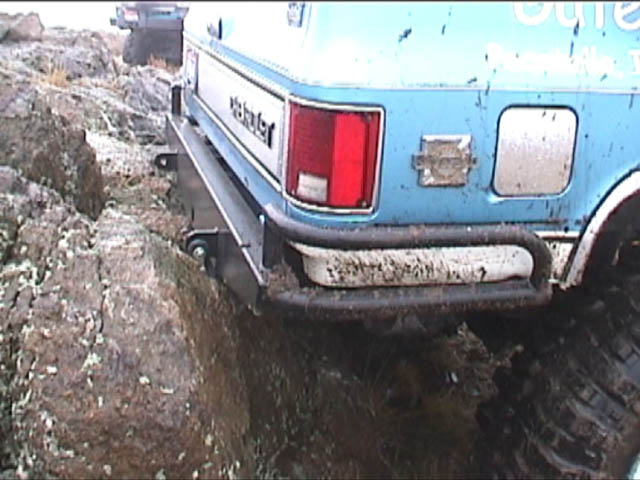 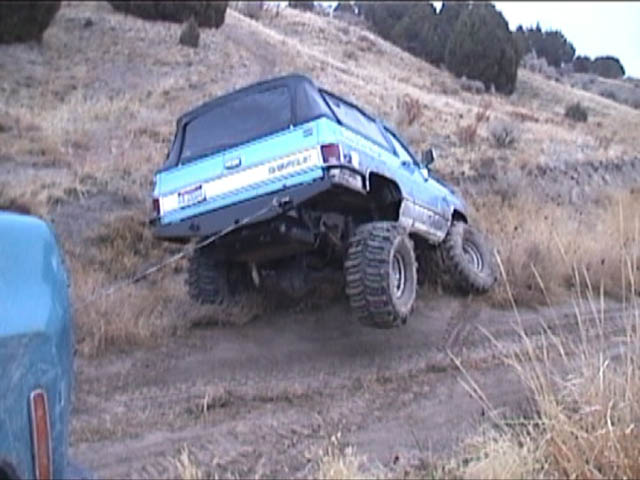 Testing more than the bumper
​
This is a good looking bumper. It was a major improvement over the square tubing that I was using before. The side armor provided some nice piece of mind for some of the narrow trails that I like to run. It tucked up nice and high and did not get in the way of ground clearance at all, departure angle was good also. The bottom of the bumper was level with the bottom of the frame and then tapered up from there. Getting it to drop down on a rock was challenging. I was able to find one though and it took it fine. I was also able to just drop down onto the side armor with no damage at all. Before this bumper, that stunt would have crushed up the body and most likely would have hung up on the old bumper. This one just slide along until I was through. The mounting points for the clevises came in very handy. No more wrapping a chain around the frame in the mud or the snow for me. If the clevises rattled, I could not hear them over the engine and the tires.

Overall I am very happy with this product. I was planning on having somebody here build me something for the front, but after seeing the quality in the construction of the rear bumper, I will have to see what 4x4 Iron has available for the front as well.