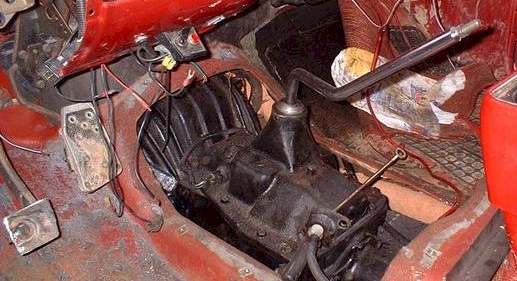 Auto (TH350) to (SM465) Transmission Swap
​
My TH350 was about to crap out on me totally, reverse was slipping, and I only had first gear, so it was time for a change. I opted for a manual tranny because I run a lot of mud and like to get the gears where I want them and be able to just drop the clutch if I become stuck. I located a transmission and transfer case in Colorado, it was a SM465/NP241 combo from an 89 K5.

My first order of business was to clean them both so I could see any problems, I proceeded to buy 4 cans of Brake Kleen and pulled out the drill and wire brush bit. My Attention Deficit Disorder quickly converted itself to Obsessive Compulsive Disorder and I took control and blasted every spec of dirt off the transmission, transfer case, and adapter within probably 2 hours. Then I went and bought some HI-temp engine enamel from Advance Auto Parts and painted the transmission and adapter. I have no reason why I painted the PTO covers red, other than it looks kind of cool. 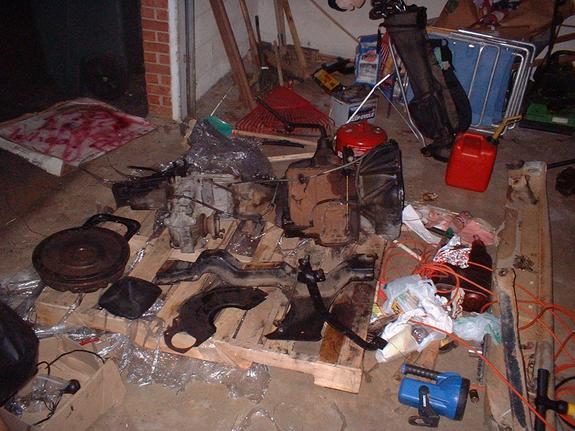 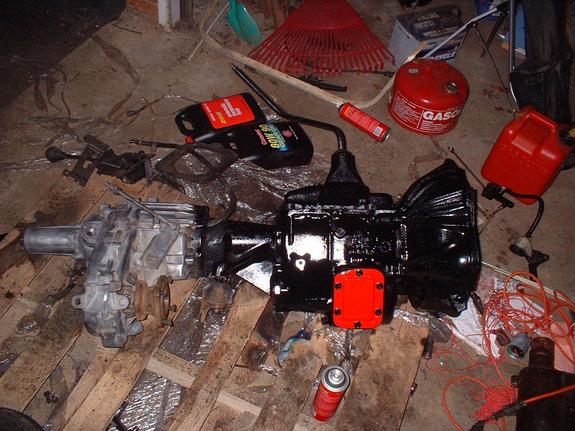 After
​
Time to pull the old transmission and transfer case:
I started by pulling the bellhousing cover, but it was just personal preference that it be off, I now removed the shifter on the transfer case and unbolted the tranny hump from inside the truck. Then I took an engine hoist and put it in the door and used some thick rope to tie it to the transmission and transfer case, then I pulled the shift linkage to the TH350 by removing two cotter pins and simply pulling it out. I will warn that the cotter pin on the steering column side was lucky I didn’t buy a torch and melt it after I got it out just to torture it, this alone took me 35 minutes and I had to quit three or four times because my forearm was way too sore to go on.

Finally it came out and I was able to get rid of all the linkage, then I jacked the engine hoist up and got the rope taught and removed the crossmember bolts and lowered the hoist to allow the spacers to come out. Then I lowered it down a little more and removed the torque rod on the transfer case. I made sure the motor mounts were not under extreme stress so I was careful not to lower the transfer case too much, I also had to watch the distributor and made sure it didn’t get pressed against the firewall. I now removed the shifter on the transfer case and unbolted the tranny hump from inside the truck and cut the carpet and ended up just losing all carpet from the front seats back, you could just pull the carpet back from the firewall though.

If you opt to use an engine hoist I would recommend taking one seat and the door on the same side out, this will allow the hoist to be positioned straight and be able to drop the transmission/transfer case all the way to the ground without the arm being caught on the seat. Now with the combo lowered a little, I could more easily reach the top bolts on the bellhousing with a ratchet and 10” extension, I also removed the starter and pulled it safely out of the way.Now it was a matter of wiggling the combo free and off the block studs, this took little time and simply slid off, BE CAREFUL, it may not be balanced properly.

Now, with the old transmission out, it was time to get ready to put the new in, yes of course I started by removing the torque converter from the flexplate and then the flexplate from the crankshaft. I wedged a wrench in the flexplate and the block to prevent the engine from turning over when I tried to loosen the bolts. So now these came out and we’re ready to start fresh! Next I removed the driver’s seat, already having the passenger seat out from earlier, I removed it to access the steering column easier.&nbspI loosened the clamp on the backside of the firewall, disconnected the rag joint, and undid the steering column from the front of the dash. The next bolts were the worst, they are behind the insulation and are 10mm head bolts holding a plate on the column to the firewall.

Well, apparently I don’t have a 10mm socket or wrench so I had to use slide lock pliers and it took forever, I had 5 11mm sockets, and 3 9mm, so with it out I could finally remove the brake pedal, I had to remove the brake pedal so I could later add a clutch pedal. Next I put the new flywheel and clutch disc on after thoroughly cleaning them with Brake Kleen.

For the pilot bearing I was forced to reuse the old one for lack of a slide hammer and the grease method not working. The old one was a BUSHING so I just greased the input shaft and bushing real good, and it works fine. Now, it indeed was time to lift the new tranny into place, this took a little wrestling but it finally slid onto the studs. I put all the bell housing bolts in and put the starter on, luckily it didn't required any shims. Next I put the drop transfer case spacers over the holes in the crossmember and held them in place with bolts taped into place and then lifted the hoist to tighten them into place, then I took the bolts out and drilled new holes, then I put the bolts back in, bolted the slave cylinder up and I was ready to start the clutch pedal install. 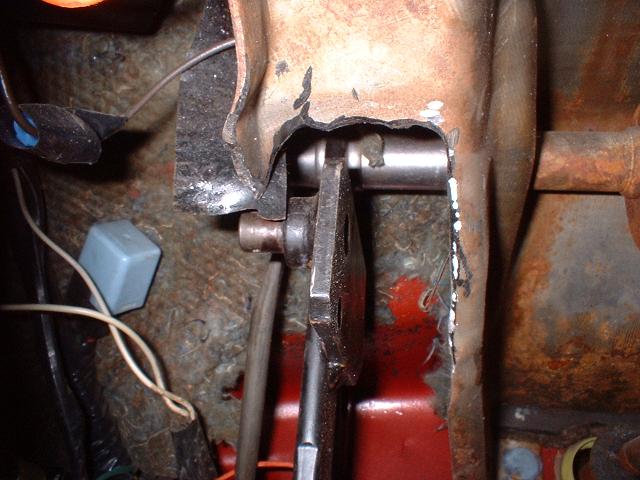 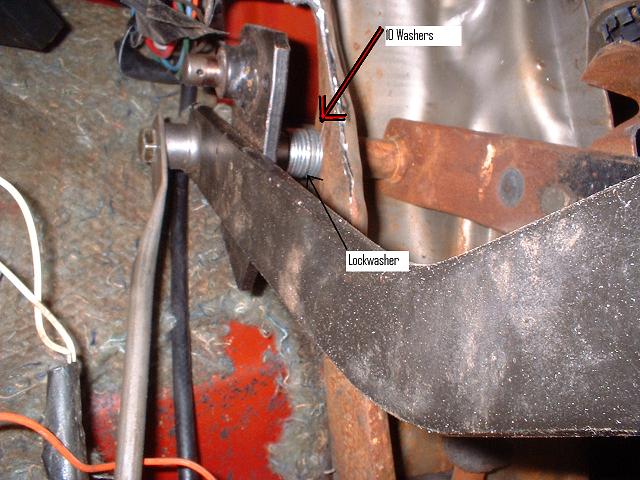 Clutch Pedal Installed
​
The picture above shows the nut on the passenger side of the brake pedal bracket, (good thing I opted for the 7" instead of the 6") I will probably go back to a factory nut that is elliptical at the top to lock it. Factory Brace
​
Then I rotated the support on the far drivers side to the firewall and tapped it with a hammer to mark where to drill. I drilled a 9/32 hole a first and it would have been big enough if the brace did not rotate on an arc. I had to enlarge it to 3/8" and it still took some persuading to get it to go in the hole, I like that though, nice tight fit. I then tightened the 13mm bolt on the other side of the firewall until both surfaces sat flat on the firewall.

Finally I spent about 15 minutes with my $4 angle grinder from ebay and cut the brake pedal down even with the horizontal bar that goes half way across the pedal. At this point it started smoking, so I wiggled the left half of the pedal off and quickly touched up the edges. 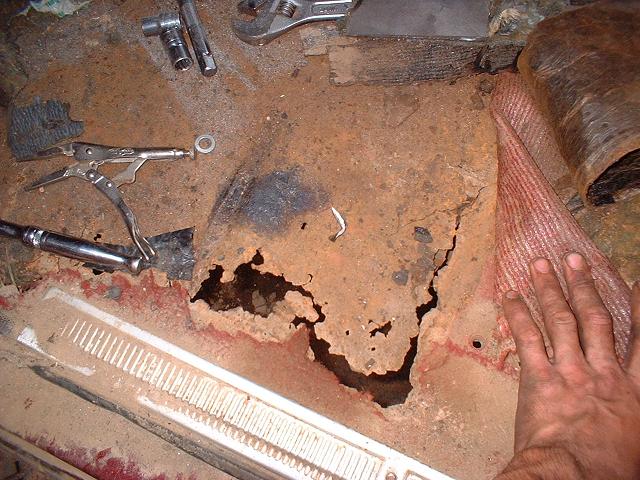 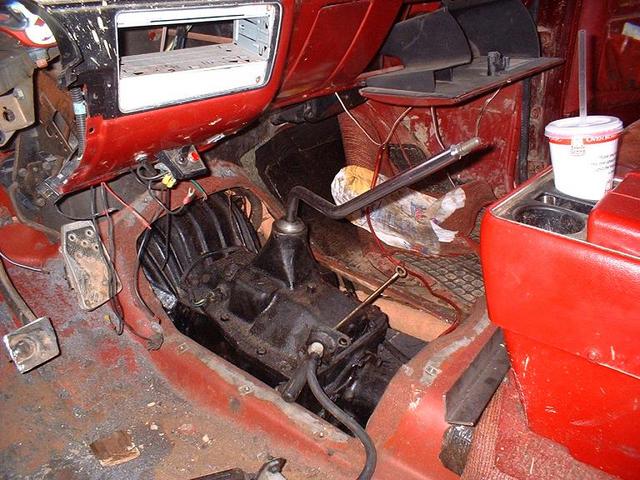 Finished​
Of course, there are those little unexpected surprises, I will also note that I'll probably need to move the console back about an inch to allow reverse to fully engage.