Article/photo's courtesy of
Scott, AKA mrk5 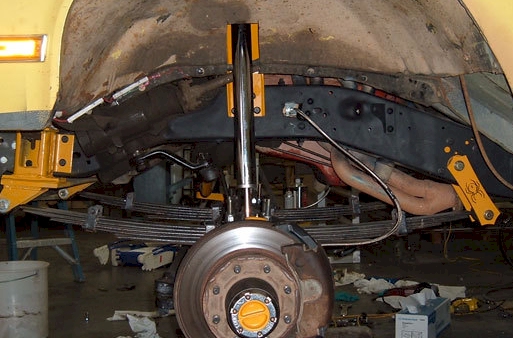 Custom DoetschTech Shock Installation
​
What started as a 1-ton axle install turned into an entire new suspension for the General, my 1984 Chevy K5 Blazer. My biggest concern with the new suspension was the street performance. I need to drive the truck to and from the trail and sometimes I just like driving the truck around town. I decided it was time to explore some better shock options.

Now I'm not expert on shocks, but I am a thinking man. So everything that follows is based on my own research and the conclusions I've drawn from that research. I did a lot of searching on several Internet forums and talked with several people I feel "know their stuff."

I think the first thing to look at is twin-tube versus mono-tube. Most of us are familiar with twin-tube shocks like the Explorer Pro-Comp shocks I was running in the past. Twin-tube shocks are less expensive to manufacture hence their pricing and popularity. The difference between the two types of shocks is evident in their design as illustrated in this picture. 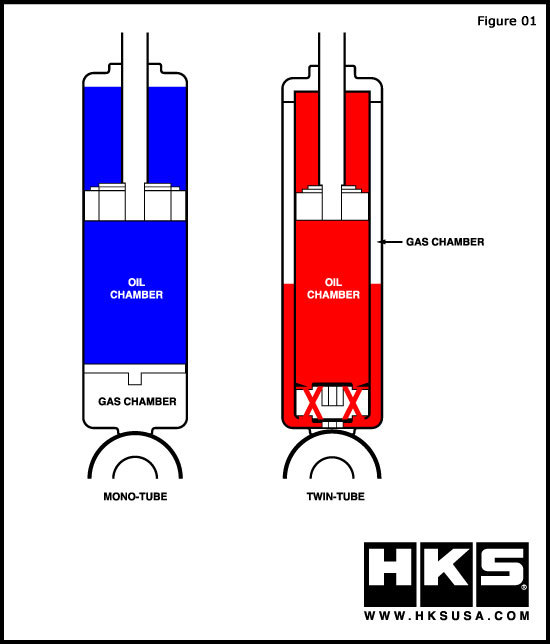 Mono-Tube VS Twin-Tube
​
Basically the advantages and disadvantages of both styles are a result of their basic design. Monotube shocks have a relatively larger piston, subtle dampening adjustments are easier and they dissipate heat better all because of the lack of a second chamber. However there is one obvious disadvantage to the lack of the second chamber, a dent in the shock body of a monotube shock may cause the piston to bind. The research and development for monotube shocks is more expensive hence the higher retail price.

I decided on monotube shocks for a couple of reasons. Primarily I found through research and interviews that monotube shocks will give me the best results for what I desired in handling characteristics. I was also willing to pay the additional costs involved with monotube shocks.

I narrowed my decision to 3 choices in my $100-110 price range:
I ultimately chose the Doetsch Tech (DT) Monotube 2.0 smoothbody. The other two shocks are very good choices and come highly recommended. I felt the DT shocks were just a better overall value. Here's what they have over the other two options;
The only reservation I had about the shocks is the lack of information about them, or more accurately lack of reviews. I wasn't able to find and other people using this shock. The closest I came as a friend who has a similar but older style from DT. I overlooked the lack of reviews because I know DT has been around a long time and their other shocks are well received.

Below is the chart of shocks available as of March 2007. There is also some sales information at the bottom: 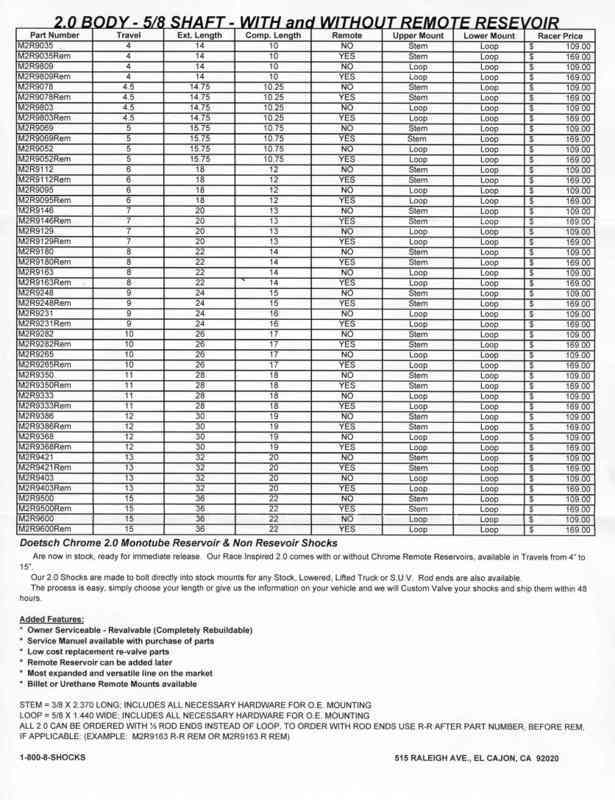 Shocks available as of March 2007
​
Now don't get nervous about the custom valving choice because DT can take care of that for you. I ordered the shocks direct from DT and I handled almost the entire transaction via e-mail. I talked to them on the phone twice and one of those was to pay for them by credit card. I gave them a very detailed description of my truck, what I use it for, and what I expected. They chose the valving options based on that.

The valving they set me up with was what they considered medium for my truck.

I'll bet you're thinking the same thing I was when I received the information, "What the hell does that mean?" Well I sent a reply asking that very question, albeit a little bit less vulgar. This is the explanation I received:

2.0 monotube valving stacks are made up of 4 discs that control the compression and rebound based on the thickness of each disc stacked on top of each other. These discs flex upon the entry of oil through the piston port. The ports in the pistons have 3 rebound ports and 6 compression ports.

Below you will find the basic valve stacks and the dampening forces produced using the stacks listed for both compression and rebound. The valving that is installed in your new shock is the base line or "medium" valving for that type of vehicle. Valving or dampening forces are determined by personal preferences, i.e. soft, medium, firm 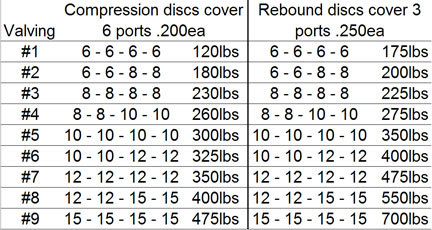 Doetsch Tech Shock Valving
​
Other than oval track applications, valving's are very rarely #1 over #1 "50/50 style", typically the rebound side is always greater (thicker discs) than the compression side. Here is an example of a very common medium valving and how it is described.

The other options I chose were rod end mounting and 15" travel.

In hindsight I would not choose rod ends again. They ended up being almost as much of an adventure in research as the shocks themselves. They are just like little heim joints on the ends of the shocks.

The first obstacle was the necessity for some sort of spacers in conjunction with the rod ends. You can't just bolt them in because they need to be able to pivot with the suspension travel. I found some spacers through McMaster-Carr.com and they weren't cheap. You can also pay a little more for some fancy ones from Polyperformance. Below is how they look assembled with spacers: 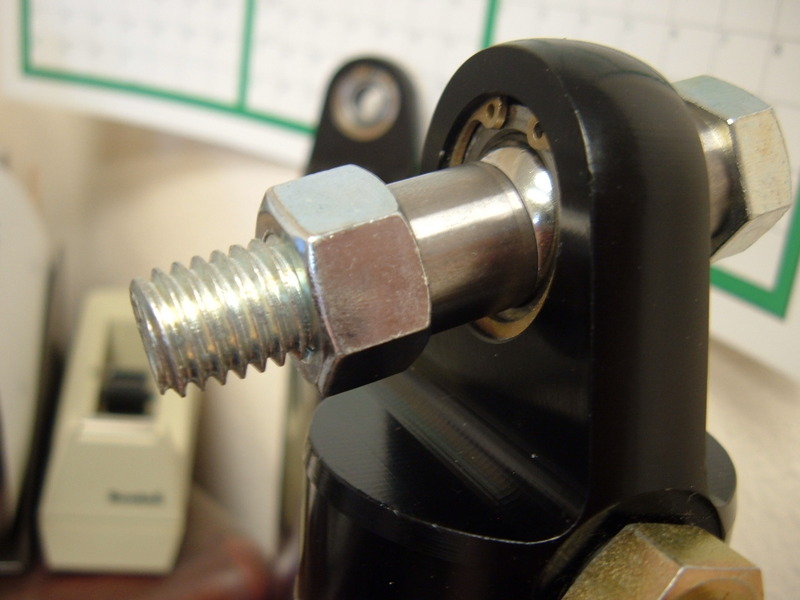 Assembled with spacers
​
The next problem with the rod ends became apparent once I received the shocks. There is a big warning label specifically stating you cannot weld on the truck with the shocks installed. The rod ends can allow electrical current to flow through the shock and damage the internals. Now in some conversations with guys running coil over shocks, they've been able to get away with welding by putting the welding ground very close to the area being welded. So if you have rod end style shocks be very careful!

My final issue with the rod ends is noise. The rear shocks enter the cargo area of the K5 and at the time this is being written I don't have them enclosed yet. Because they are basically rigid with no urethane isolation, there is a constant "chatter" when going over rough terrain.

I don't know why I went with the rod ends. I guess it was a "cool factor" decision gone horribly wrong. Buy poly bushings!

Back to my order options, let's address the choice of 15" travel. Once I had the suspension installed, I built an RTI ramp so I could take some measurements. I clamped a flat piece of metal to the top of the frame rail and measured the total suspension travel at the factory shock mount. It came out to 10". I thought pretty hard about the 13" travel shock, but I ultimately decided on the 15" travel. It didn't cost any more and I hope to use these shocks for a long time and I may need more travel in the future.

I'm glad I went with the 15" travel now that I've finished the installation. The reason is I had 5" to play with. Meaning I didn't have to get the mounts to come out to an exact distance. This made the bracket fabrication much easier.

Below are some pictures to illustrate the length of 15" travel shocks: 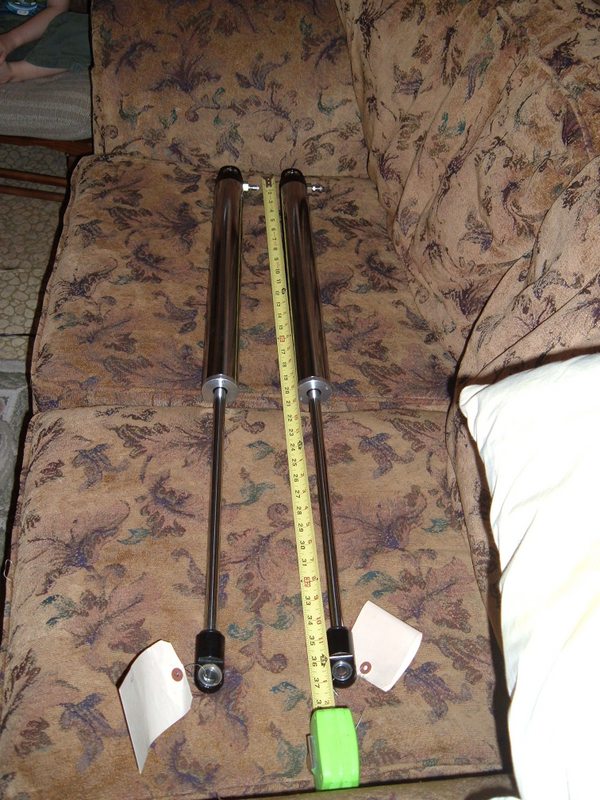 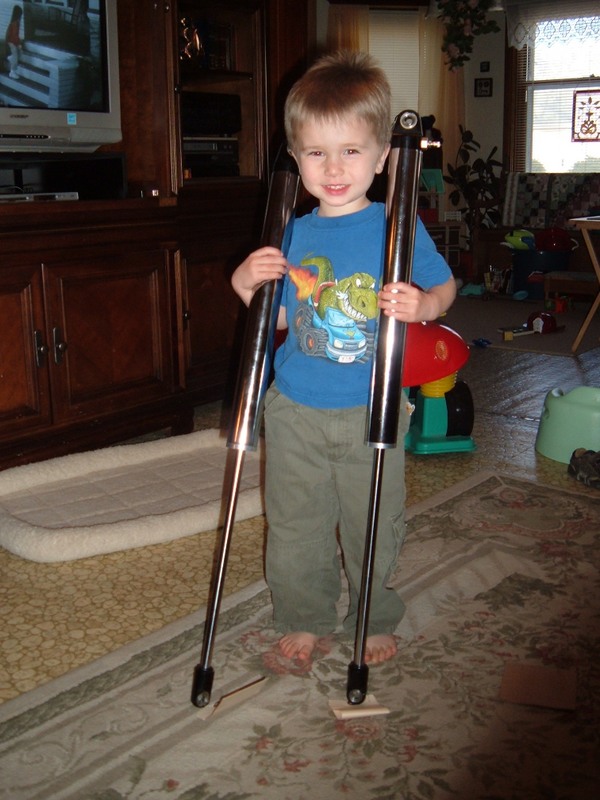 Shock length compared to young Off-Roader
​
The next step was to actually install the shocks which required fabricating my own mounts. I had 2 goals with my mounts:
I wanted to achieve those goals so that the shocks would have the best operating advantage. And I'm sure this is how they build them to operate.

This is what I ended up with: 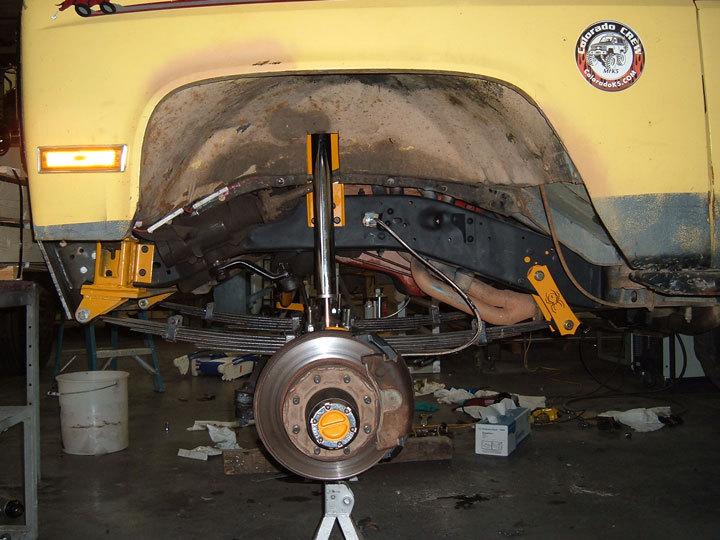 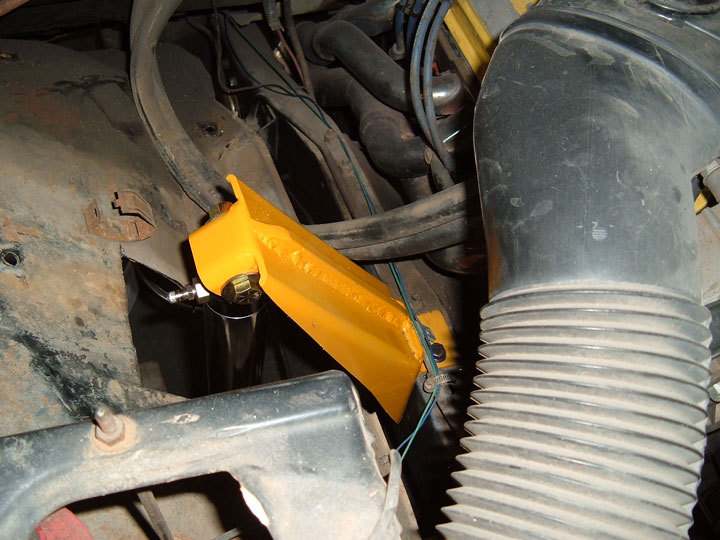 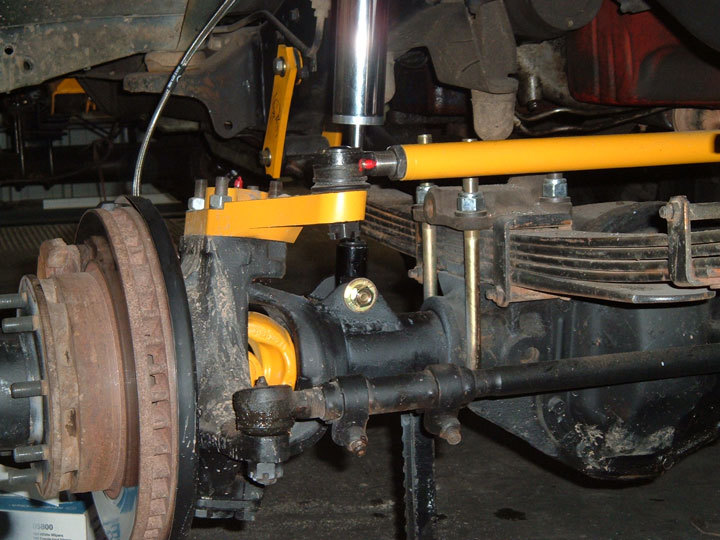 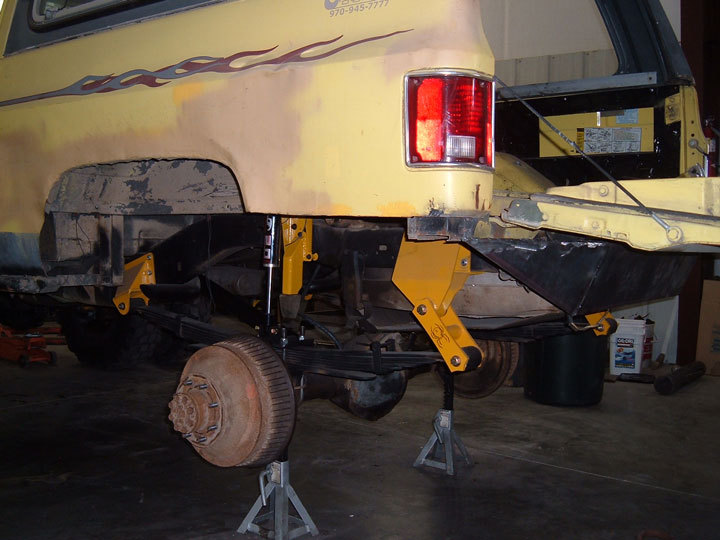 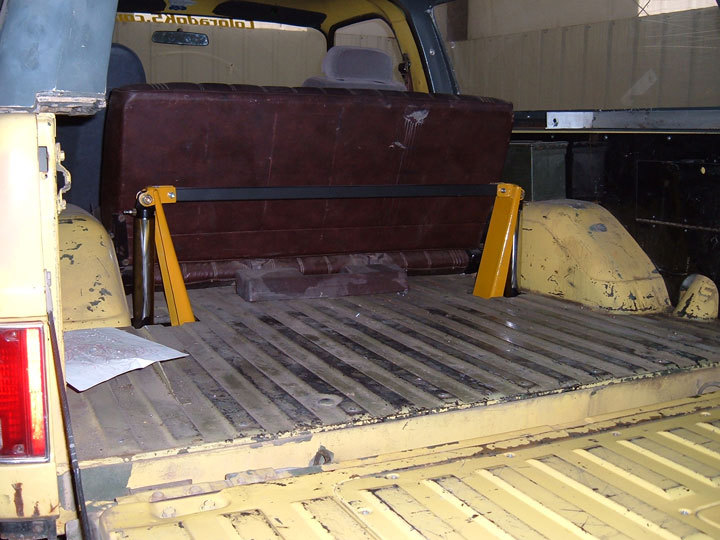 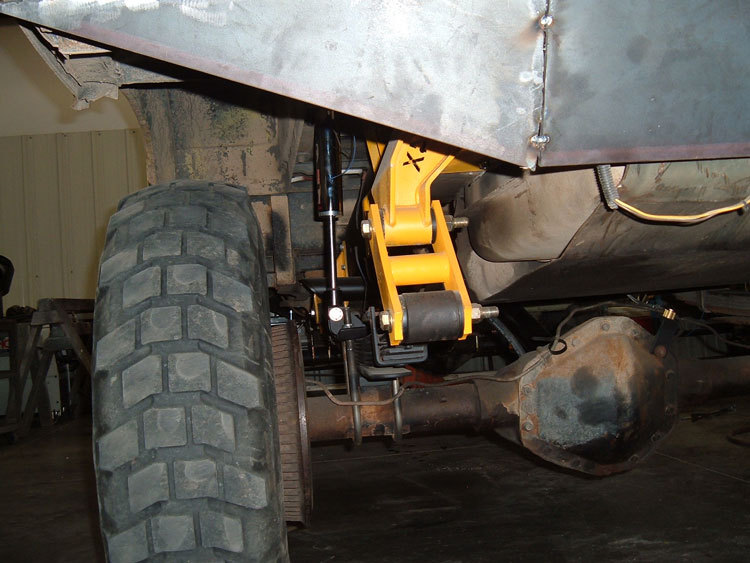 Rear 3
​
So, how did I make them? It took a lot of drawing, math, measuring and head scratching. I knew I had 10" of total shock travel, but you need a little more specific information than that, primarily the difference between up and down travels. The 10" travel broke out into 4" up and 6" down from ride height.

Because I'd chosen the 15" travel shocks and had the extra 5", I set the brackets so that there was 5" of up travel and the rest remained for down travel. Plus I installed the bump stops at a height to prevent the springs from excessively over-arching in the wrong direction so I have plenty of room for up travel.

The other factor or measurement to consider was how far out to lean the top of the shocks. The front driver side was the determining element on the front brackets because of the steering shaft. I didn't think about this when I started and the first bracket I made didn't clear the steering shaft. In the rear I just leaned them out enough to keep the shock inside the fender wells.

To make the brackets I used a piece of 4" square tube with 3/16" wall. I cut the tube in half to make a C. Next, I notched the brackets and bent them for the outward lean and then welded up the seam. I drew a straight line from top to bottom through the seam and cut the excess off. This made a nice smooth bracket. The final step was to add tabs for the shocks to bolt in. Hopefully the drawing below helps explain what I did: 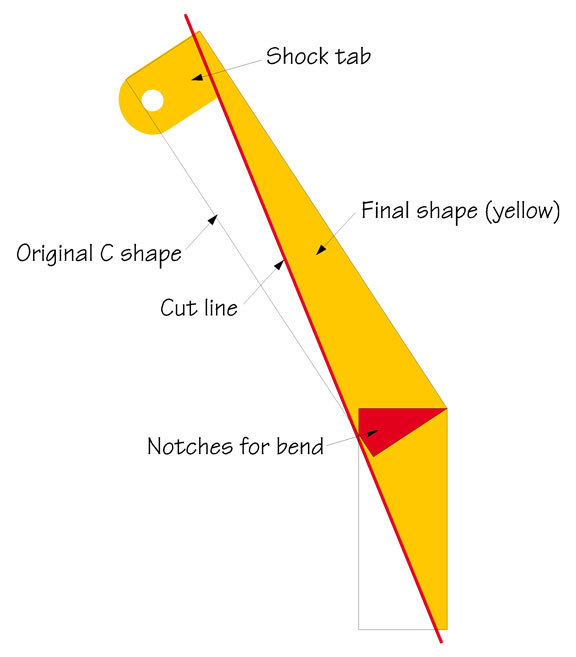 Custom shock bracket
​
You may notice some extra bracing in the pictures above. The rear brackets were so high off the frame I felt I needed to add a cross bar and it was pretty simple to do it. In the front the engine would make a cross bar very difficult, so I just settle for extra gussets and braces on the back of the brackets.

Next I made the tabs for the axle mounting. The rears were pretty straight forward but the fronts were a little goofy. The axle tabs landed right next to the inner C on the axle end. I cut a piece of cardboard and used that to trace and cut all of the tabs. 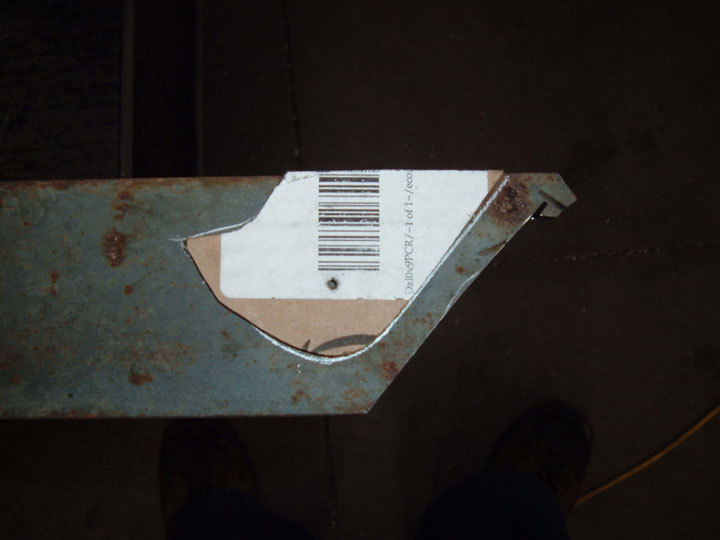 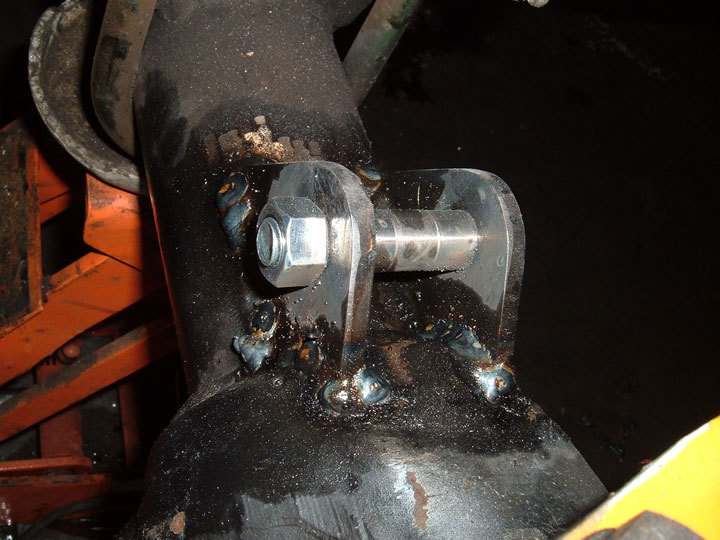 Front axle shock tabs
​
I did make one mistake when I welded them on in the last picture. I put the 3 spacers in there to get the exact 1.5" spacing I needed to install the shock and 2 spacers. It was a little too exact. I ended up grinding some on my expensive spacers so they'd fit. On the rear tabs I remembered to add a piece of .040" thick aluminum in there to give me a little wiggle room.

Installing the shocks with spacers is a HUGE pain and another reason to avoid rod ends.

Doetsch Tech recommends waxing the shafts periodically with good car wax. This creates a protective barrier on them and helps prevent dirt and debris from sticking to the shafts and creating future problems. To remove mud and debris from the shafts they recommend using WD40 (or similar product) to wipe it down and rinse with water.

So, how do I like them? They work awesome! I feel no difference with street performance compared to my old standard lift spring suspension with no swaybar. I actually feel less body lean on the curves now with 52" springs in front and 56" springs in the rear.

On the trail is where they really shine. The slow crawling stuff is not much different, but now I can fly down the "smooth" sections of the trail. Rough bumpy access roads are not nearly so horrible anymore. The best way I can explain it is that the softer springs take the force out of the initial impact and the shocks eliminate the rebound lurch in the opposite direction. I'm no longer getting jarred back and forth over the trail.

A buddy rode with me and immediately noticed the difference. My wife confided that she initially thought the shocks were a bit extravagent but after riding in and driving the General she feels they were worth the money! Now there's an endorsement you can't beat! 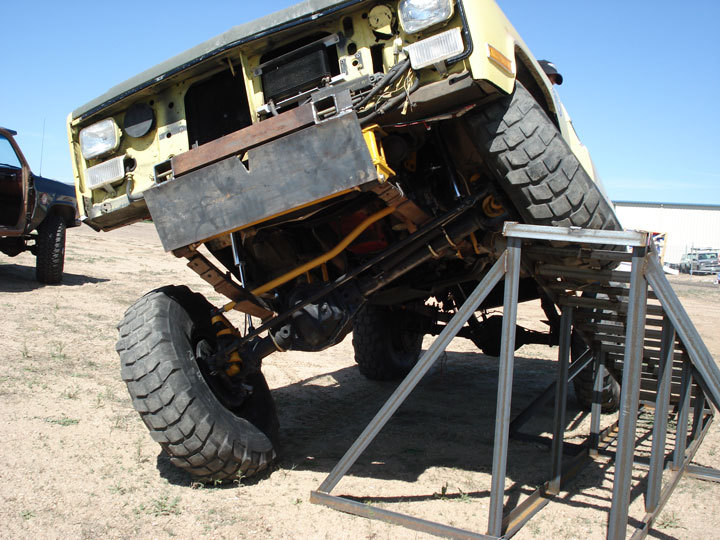