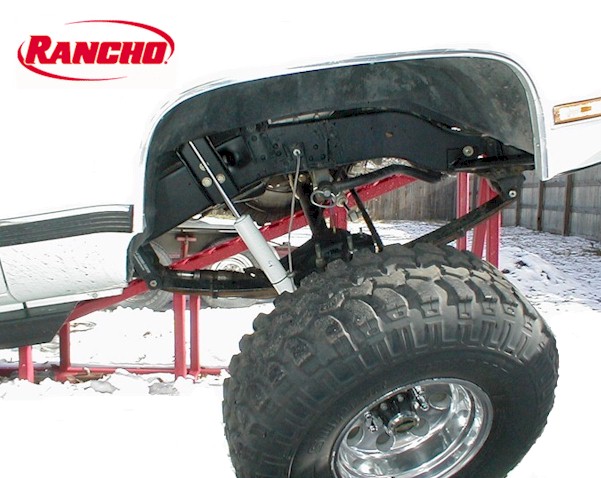 Extended Shock Mounts with Rancho Shocks
​
In order to take full advantage of our leaf spring articulation, something had to be done with the factory shock mount locations that were severely limiting travel. We had seen a number of 4x4's of different makes and models using 1980 Ford F-250 front shock towers simply cut to the length needed and bolted in place. With a price around 30 dollars for the set and a simple bolt on installation, the Ford towers were a logical choice.

Because our project Blazer is currently a daily driver, we needed a shock that would allow a fair amount of travel for off-road use, yet be able to soak up everyday on-pavement bumps and pot-holes. With 13-1/4" of shock travel and the ability to adjust the desired performance curve: firm for off-road; soft for street, and mid-range for highway use, the RS9012's were just what we were looking for. 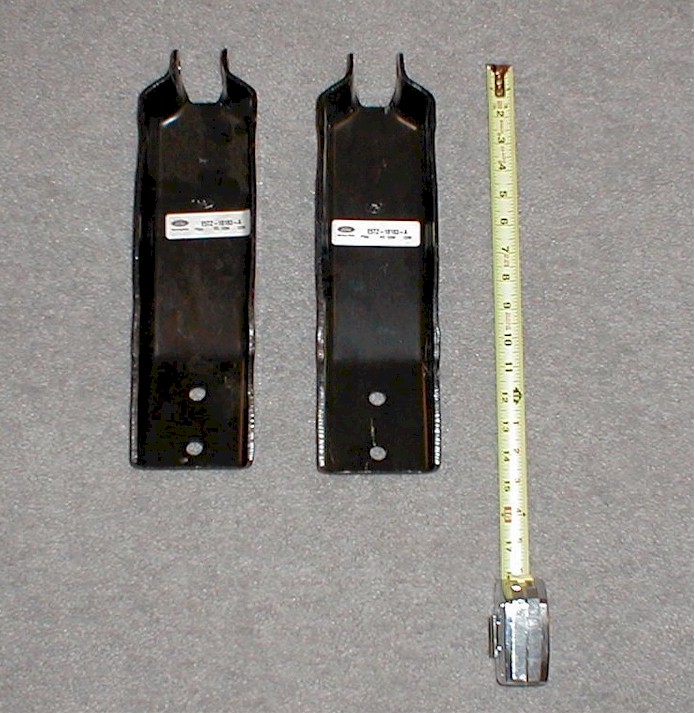 ​
RS9012
* Five settings adjust both compression and rebound damping for precise ride control.
* All shocks easily adjusted while mounted on the vehicle.
* Set desired performance curve: firm for off-road; soft for street, and mid range for highway use.
* Covered by Rancho's Limited Lifetime Warranty.
* Easily up gradable to "in-cab" on-the-fly adjustment by adding the RS9700 or RS9600 Remote Control kit.

The Ford F-250 towers are almost 15" long, so they will have to be cut down to fit properly depending on the amount of lift. The first thing that has to be done is to remove the front wheel and securely place a jack-stand under the front axle, it is important to place a jack-stand under the axle and not to lift the vehicle by the bumper, doing so will flex the springs and result in an inaccurate shock measurement. If you have the factory quad shock setup the lower mount will have to be removed, we simply drilled out the factory rivets and pounded out the shanks so we had a clear frame to work with. Also note that if your truck originally came with a 10-bolt front axle as ours did, an extra bump stop bracket located on the passenger side will have to be removed. With a clear frame to work with and the old shock removed we began by installing the new RS9012 in our new shock tower and lower axle mount. This way we could move the tower and shock around to check for clearance and proper placement. The towers will have to be angled back a bit to allow proper movement of the shock from compression to full extension. We decided to mount the shocks with 6-1/2" of the chrome rod showing, almost dead center of the 13-1/4" of total shock travel, keep in mind we have 5" of suspension lift, placement of the shocks will vary depending on amount of lift each vehicle has. 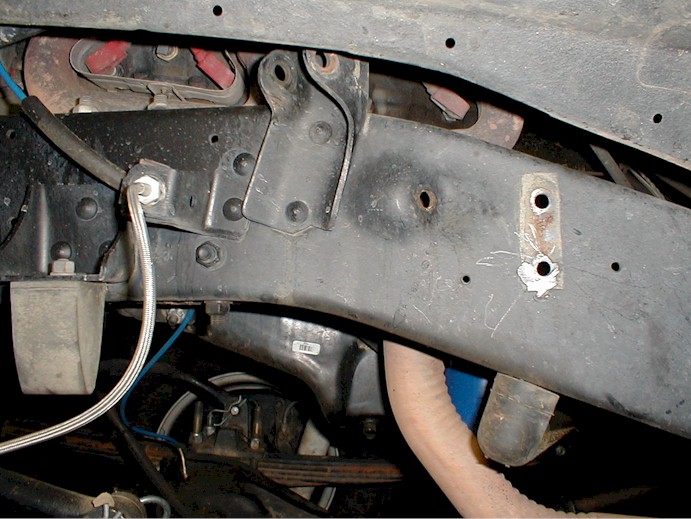 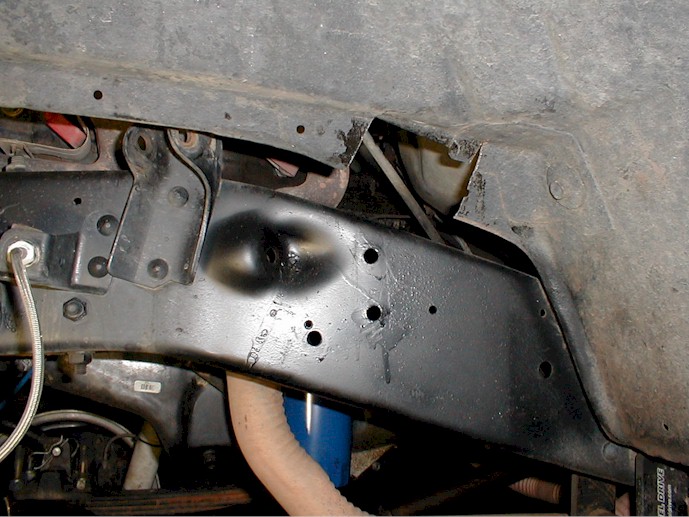 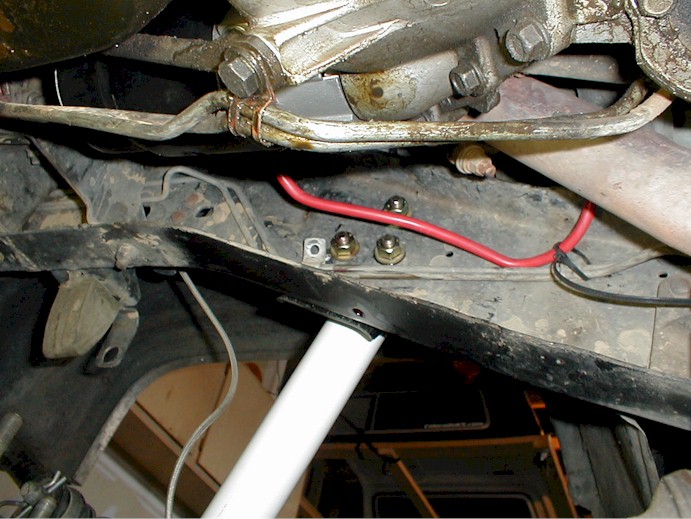 Fuel Lines in frame Rail
​
We decided to use the two existing rivet holes in the frame by enlarging them to 1/2" and then marking and drilling matching holes in the shock tower itself. For the third bolt, we drilled a small pilot hole through the tower and frame followed by a 1/2" hole. Before drilling an extra hole to mount the tower - one word of caution - on the passenger side, the fuel lines run on the inside of the frame rail. After all three 1/2" bolts were secure it was time to trim the excess length from the tower. We found it easier to just trim the tower while it was installed on the frame, so out came the saws-all and off came about 4" of shock tower. We also decided to bevel the sides of the tower for a little more room when the shock fully compresses, it also gave it that finished look. After all three bolts were tightened with lock-tight we cut a small area of inner fender just above the shock tower to make sure there were not going to be any clearance problems. At this point the RS9012 shocks can be installed. 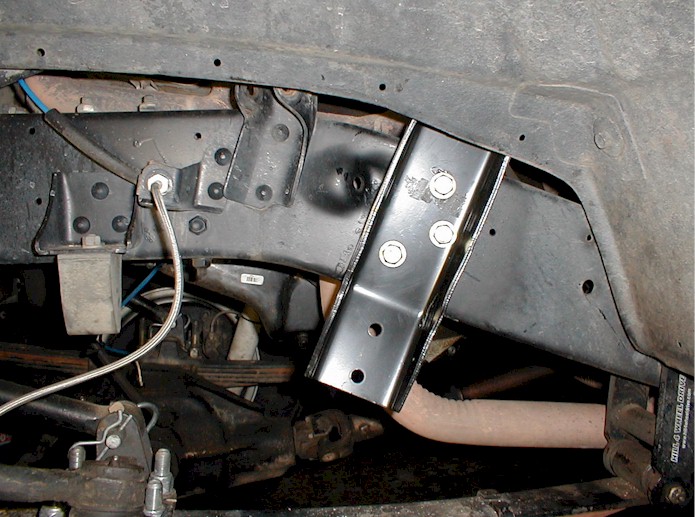 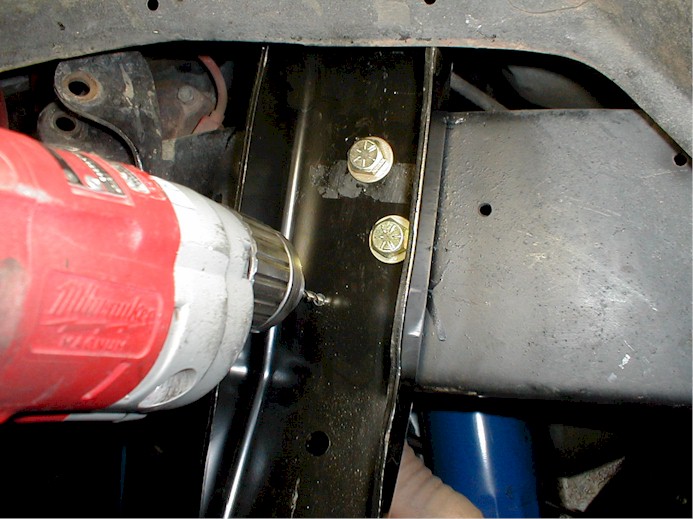 Shock Compressed
​
Because custom fabrication and welding were needed to install the extra long RS9012 shocks in the rear as well as exhaust modifications, we decided to have Off Road Ltd. in Aurora Colorado perform this upgrade. Without a major body lift the only real way to extend the shock mounts in the rear is to either extend them through the floor or angle them in towards the center of the vehicle using a custom brace. Installing shocks through the floor was not considered for obvious reasons so we went with the custom brace welded in between the frame rails which ended up working real well. Off Road Ltd. put a small upward bend on each side of the brace made from 1-1/2" OD tube to extend the mount as close as possible to the body. On the axle, the new mounts were pushed out as far as possible to maximize stability while keeping them level with the bottom of the axle tube to minimize over hang. This setup works very well, the idea is to angle the shocks in towards the center allowing taller shocks to be installed which will provide additional travel, but keep in mind, if they are angled in to far the shocks will start to loose their functionality as well as their stability. 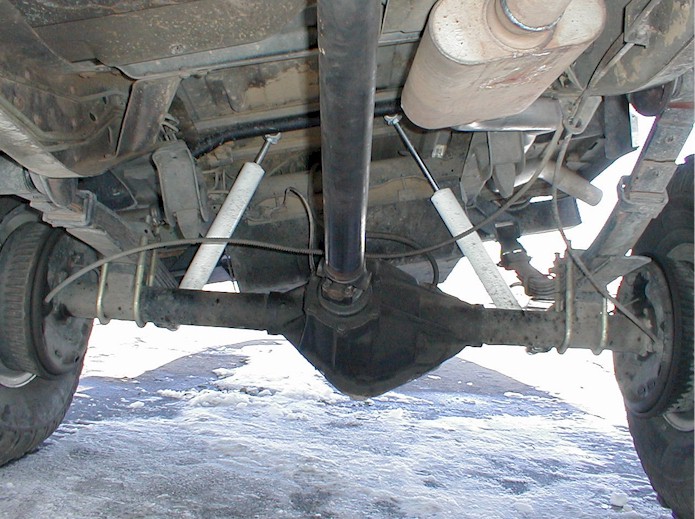 Shock Compressed
​
Before the extended shocks were installed our project Blazer was run up a 25 degree RTI ramp scoring a 817, next it was driven up the ramp backwards scoring a 867, in both directions the short RS5000 shocks in the stock location were severely limiting our articulation. After the extended mounts and RS9012 shocks were installed it scored a 930 forward and 977 backwards. Needless to say we were quite happy that a full-size 4x4 with common leaf springs and no trick suspension parts with extended shocks could score in the mid 900's on a 25 degree ramp. 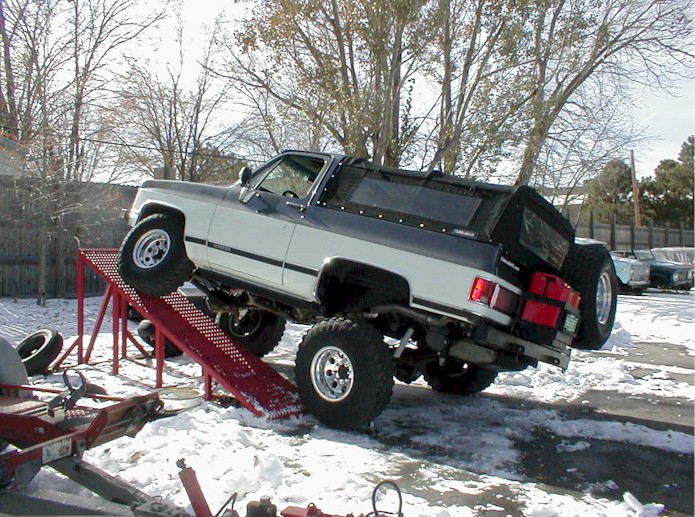 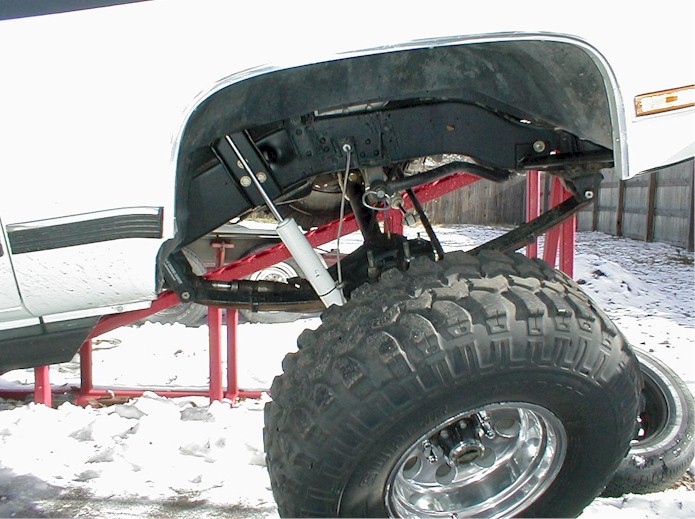 Front Droop
​
The RS9012 shocks are working out quite well and we love the ability to adjust them from soft to firm for all types of on and off-road use. Look for an upcoming "Extended Shock Mounts II" article where we will review Rancho's duel in-cab remote system that will allow us to choose between five different ride settings from within the comfort of the cab.