Home Made Shackle Flip
​
Here is a bit of insight as to what I did to get a Compression style setup on the rear of my truck: First you need to jack up the rear of the truck, and then support the chassis on jack stands.

Then support the rear end and unbolt the rear of the spring from ONE SIDE. The one side is so it isn't as hard to control the rear end. Also, watch the brake lines.

Next is the fun part, you need to remove the rivets that hold the spring hanger. These can be ground off, torched off, drilled out, or cut off with a chisel (have fun). You do not HAVE to cut the shackles off the vehicle. I did so because the torch I have access to was not where the vehicle was located, they don't allow welding with in 50' of a fuel source, and before I actually decided to use the stock perches, I had already purchased some stock 2wd. front rear-spring hangers. They can be used in the rear and work very well, I just didn't want to try and "guess" what would make the truck ride even. I decided to use the stock ones because the holes were already available.

After you get the hanger off, you will need to cut a hole large enough for the shackle to fit through, this is where the subject of Strength comes into play. I haven't had a problem with mine yet, currently to date, with this setup, I've Towed a #2000lb Sami down from Ohio to North Carolina, a trip to Michigan, and numerous off-roading trips, and have even had the vehicle sideways on dry pavement (I can't think of a good excuse to give you for this, but don't do it) and haven't bent, broken or destroyed any part of my shackle flip to date.

Just make sure the hole you cut is only large enough for the shackle to fit through, and to have proper range of movement. If you make the hole too small, then that will limit the amount of articulation you will get. For those of you that want to know how much material that was removed, the best way I can explain it is to remove all the material below the two "channels" on the hanger. It will be the lowest part of the hanger directly below where the shackle will bolt up. Looking at the pictures should give you a good idea. I don't want to give you any exact sizes because we could have different hangers, so just try and try again, if you hit at any point during articulation.

Next you will need some grade 8 bolts, just large enough to fit through the holes in the chassis, but you will want them longer than you think (I'll explain later). I took one of the rivets that I drilled out to the hardware store to purchase my bolts. Now, you will need a magnet, I purchased one at Auto zone, it was on the end of an antenna type device. This was nice because it was able to reach into small areas.

What you need to do is get the bolt up between the frame rail and the gas tank, then stick the magnet through one of the rivet holes and grab the bolt with the Magnet, pull it through the hole and then through the spring hanger. The reason you want longer bolts is so you can take and screw 3 nuts onto the bolt. One goes on and bolts on the hanger to the chassis, the other two tighten against each other to allow you to tighten the bolt next to the hanger with out having to have access to the bolt head! This will save you from having to drop the tank to gain access to the bolt head.

After that, just loosen up the 2 bolts, and move onto the next one. Just do this to the remaining 7 bolts you need to do, and then you are done! 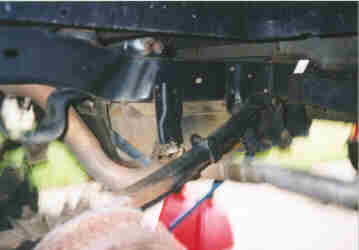 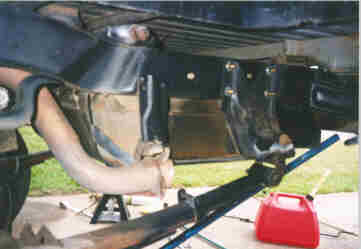