JBC NP241 HD Standard Length SYE
"IFS 241 drivers side drop pictured"
​
Most of us know all about the older legendary T-case options our beloved Chevy's came with, the NP205 certainly comes to mind. Admittedly it's a great transfer case, but it sure does lack in the low range department.

A good friend of mine is building up his 89 Blazer (his kids call it the "Big Dummy") and was unsure what direction to go with regarding his T-case. He knew the 205 was a tough case but didn't want to lose the exceptional low range the NP241 offered him, yet the slip yoke and somewhat poor driveline angles concerned him.

Well, one thing we could do to improve the NP241 was to install a Slip Yoke eliminator kit from JB conversions. First of all the transfer case would become close to 6" shorter, and secondly if he ever lost a rear driveshaft on the trail he could remove the busted parts and drive out in front wheel drive.

Our particular kit was for the mechanical speedo version NP241. 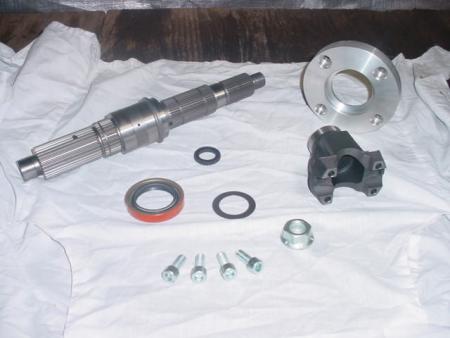 Parts spread (bearing missing)
​
Not shown in the pic is the new output bearing.

All swaps start somewhere and ours started with a before shot of a dirty T-case and a pesky slip yoke. 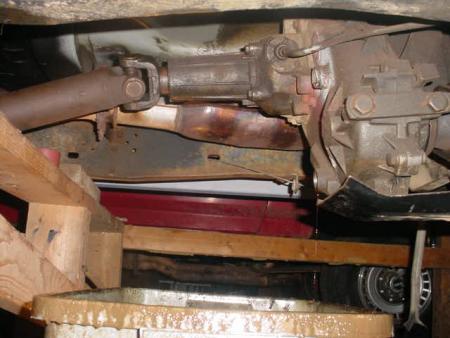 Before shot of slip yoke
​
We drained the T-case, removed the factory skid plate, front drive shaft, and T-case brace...then hoisted it onto the bench where it'd be much easier to work on. We kept all the bolts in a box to keep track of them, and started taking notes on a notepad so re-assembly would be a bit easier. 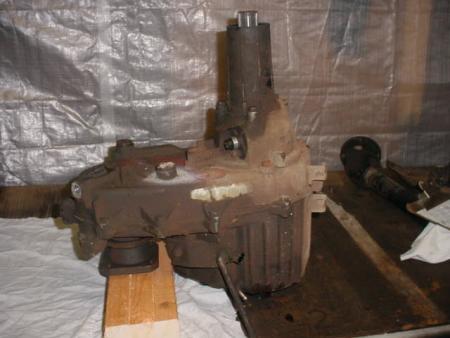 On the bench finally
​
You can see how long the slip yoke housing is on a stock NP241...

Most of the tear down is pretty straight forward, but having some good pliers for removing snap rings will really help. The snap rings are pretty beefy...

4 bolts and the slip yoke housing is off: 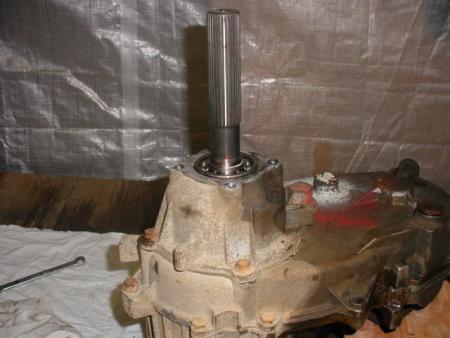 Slip yoke extension housing removed
​
Next comes the speedo housing with the output bearing, again 4 bolts and it comes right off exposing the blue plastic speedo gear. This is held onto the shaft with another two snap rings, one above and one below the gear. 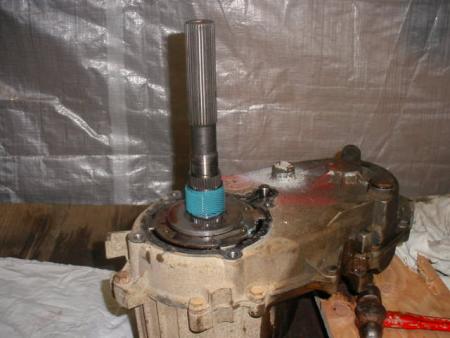 Speedo housing removed
​
An extra set of hands is very helpful with the snap rings.

We removed the rear case half at this point. Pretty straightforward stuff. There are prying point cast into the housing halves that really help. Here you can see the chain, and drive sprockets as well as the shifting mechanism. 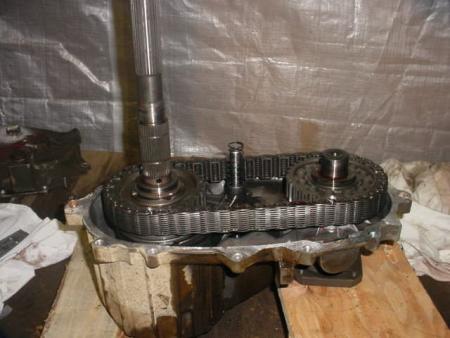 Rear case half removed
​
Once the snap ring is removed from the front output shaft the chain, shaft, and both sprockets can be removed as an assembly. In this pic you can see the brass part of the synchro as well. 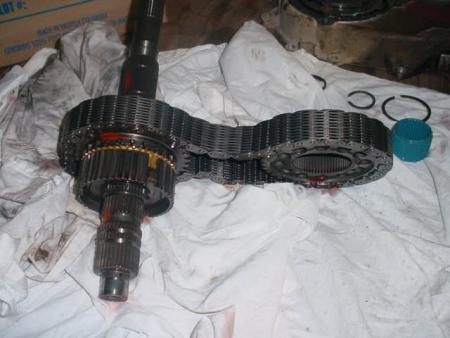 Chain, gears and old mainshaft
​
The front half of the T-case is nearly empty, except for the planetary gears. The old mainshaft still needs to be stripped of the synchro and drive sprockets though. Another snap ring holds that on...(by now you should be getting real good with the snap rings.) 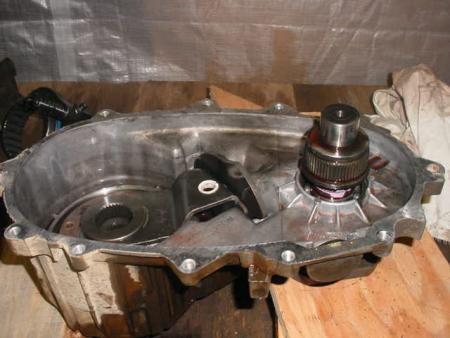 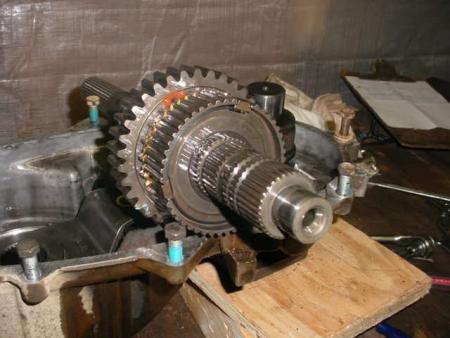 Snap ring holding drive sprocket
​
Here is a side by side comparison of the stock shaft and the new SYE shaft from JB. Shaft comparison
​
We spent a few hours cleaning everything and reading through the rest of the instructions. One thing that initially threw us a curve ball was having to remove the needle bearings from the drive sprocket, but after a quick call to JB we were back on track. The needle bearings inside the drive sprocket were pressed out with a hydraulic press. They came out quite easily and I imagine a soft drift made of brass or aluminum and a soft jawed vice would do in a pinch.

Once the drive sprocket work is done re-assembly can begin. We started by putting the shift mechanism and fork back in with the shift collar in place. 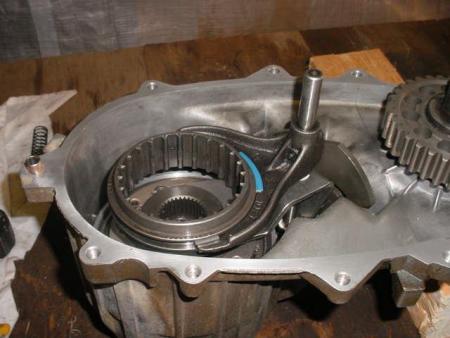 Re-assembly begins
​
Next we installed the drive sprocket and synchro assembly on the new JB mainshaft. 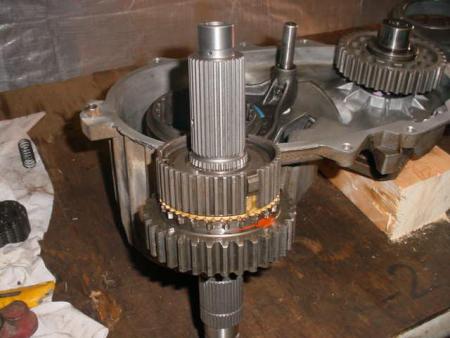 Drive sprocket & synchro on new shaft
​
The shaft assembly, chain and front output sprocket must be installed all at the same time, otherwise you’ll never get the chain on. 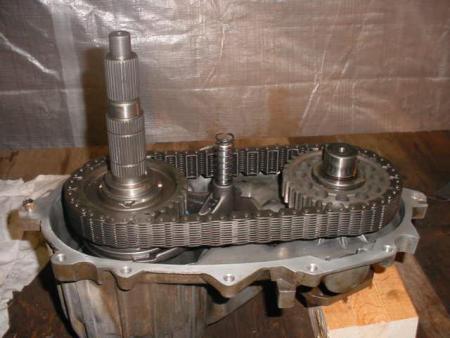 Chain re-installed
​
We then turned our attention to the rear case half. The inside was already pretty clean, so the outside was given a bit of scrubbing. The oil pump, tube and pick-up with filter were put into place. It was a bit of a chore to keep everything where it should be and get it all installed… 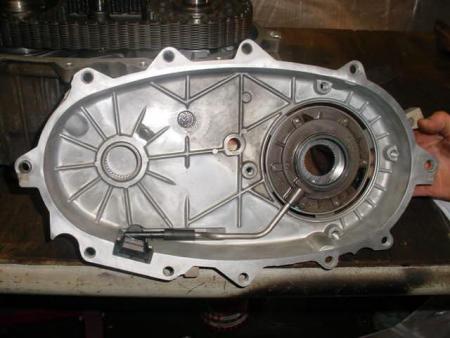 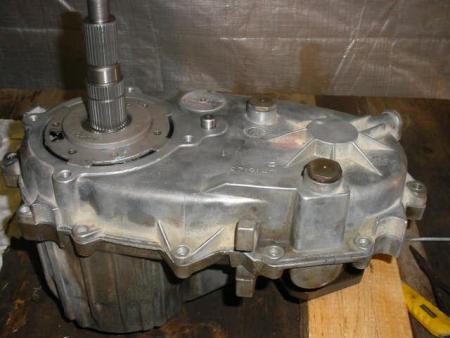 Case half's back together
​
It’s very important to ensure that the pick up tube is correctly seated in the pump itself before bolting down the rear case half. We had ours on and off a few times before getting it just right.

At this point things get much easier, the first speedo snap ring goes back on to the shaft, then the speedo gear and the second snap ring. 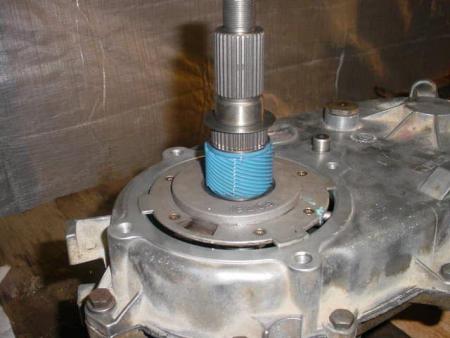 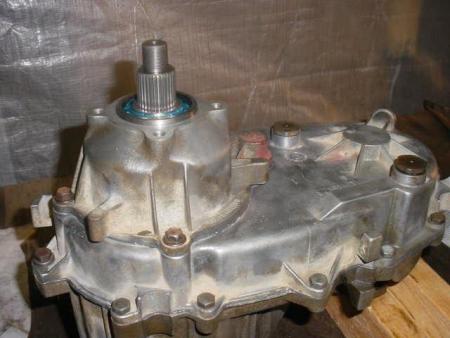 Speedo housing back on
​
Next is the JB seal retainer. The retainer with the new seal pressed in drops on and get’s bolted down with the supplied socket head cap screws. Everything to this point was torqued to 23 lb/ft so we torqued the seal retainer to the same value. 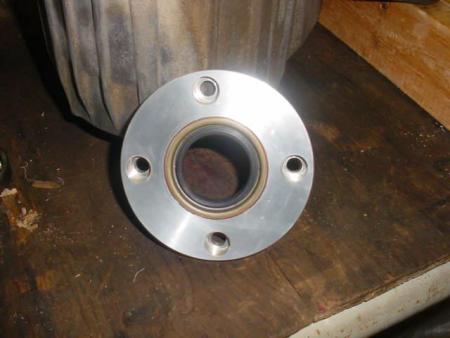 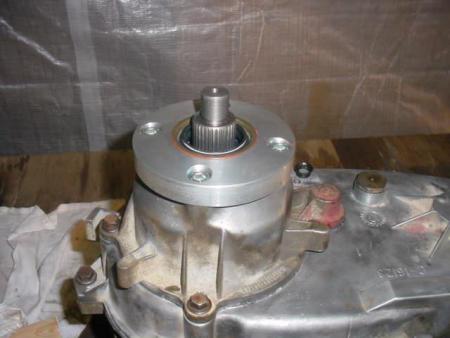 Seal retainer installed
​
Lastly the new yoke gets bolted onto the end of the new shaft. There is a black rubber washer with serrated edges that goes on and then the large flanged nut and torqued to specs (110 lb/ft). 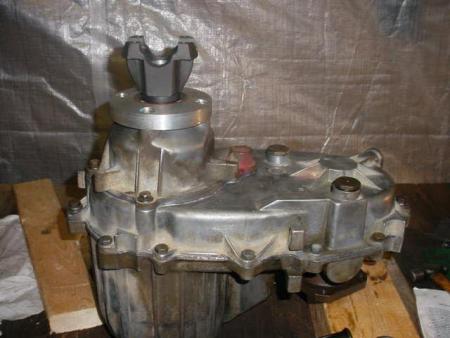 All buttoned up, ready to go back in 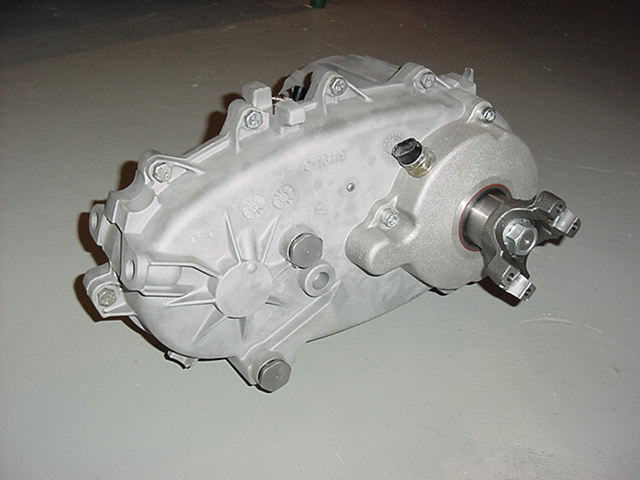 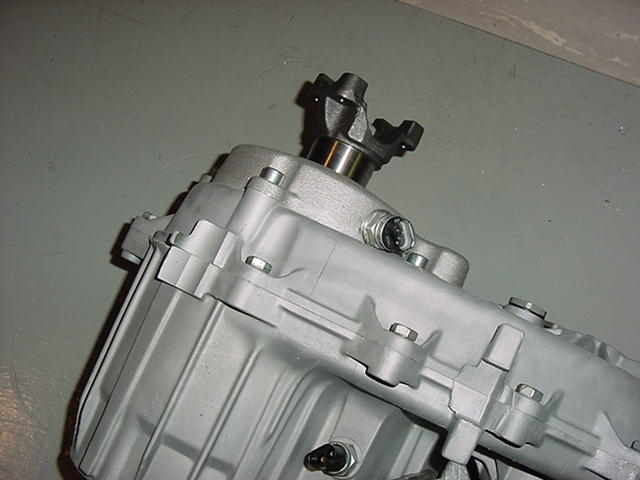 Stock versus short kit
​
As you can see the difference between the new super short mainshaft and the stock mainshaft is nothing short of amazing! These kits will both go a long ways to reducing driveline vibes by alleviating the angles of the rear shaft. The stock slip yoke is also a source of clunking as it can bind when the angles get severe enough. Having the slip joint in the driveshaft eliminates this as well.

Overall we’re very happy with the way the T-case is now, and once the beefy skidplate gets built a couple of weak points will have been eliminated without losing the great NP 241 low range.