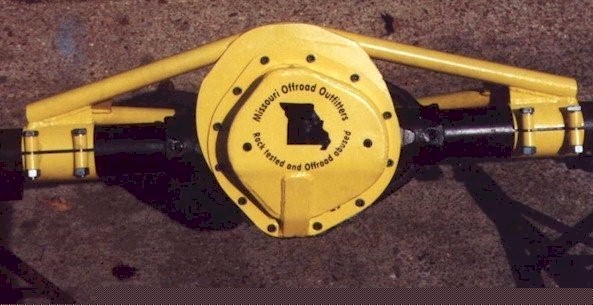 MOO 12-Bolt Rear Axle Truss
​
Look in the magazines and on websites around the off-road community and you will notice a similar idea when wheeling these days. Extreme wheeling has become the focus of many off-road rig builders because taking your vehicle somewhere it should not fit is truly exhilarating. Usually when we say your vehicle will not fit, it’s because of some immovable object – such as rock. When you involve solid rock and steel, you will find out in most cases, rock always wins. I decided to upgrade some things on my K5 Blazer to defeat this stubborn old rock stuff. I needed parts, which would stand up to the punishment. A catchy slogan caught my eye: “Rock Tested and Off-road Abused”. This is where the fun begins.

Recently, I have been involved in several rock crawling trail runs and have seen my brand-X truss folded back more than once. It just hung too low and did not really offer any protection. In fact, it probably hurt performance more than it helped. While off-roading, the tension bars would occasionally get bent, this means it probably put too much tension on the axle housing, causing it to bind slightly. After a differential explosion and secondly a ring gear malfunction, my differential cover had also seen better days. I have seen many brand-X differential guards on the market and didn’t like what I saw. The reason being, the bent tubing guards offered by many manufacturers have no support in the center of the cover. They allow the use of stock covers, which dent inward and are easily punctured. I have seen on many occasions where the differential guards were smashed into the cover; then the ring gear ate a hole in the cover causing a leak. My differential cover had enough problems with leaking as it were. The bottom edge of the cover had been peeled back several times causing a leak, making most EPA Officials cringe at the site. My truck looked more like a haz-mat experiment than a trail rig after a few days of sitting in the driveway. I needed a differential cover that would take the punishment. I also needed some housing strength in the form of a truss. I didn’t want another bottom mounted truss, which most likely would trap me in a mud bog someday. I also wanted a bolt-on installation because I do not have access to a welder, nor the experience to weld to the cast iron carrier housing.

I contacted Steve Frisbie at Missouri Offroad Outfitters after seeing his Rock Bruiser Differential Covers and Rear Axle Truss in action at the Indy Jamboree. Steve’s truck had similar drive axles as mine did so I looked his over, then decided to order. I checked out his website and called in my order for a Truss and Differential cover for a GM 12 Bolt rear end. My Truss and Diff Cover arrived pre-painted, with instructions and hardware needed for installation. After opening the boxes, I noticed the quality of the products right away.

The Truth about Trusses

A truss is installed on an axle housing to maintain rigidity of the housing and relieve the stress on internal parts such as axle and carrier bearings. Many people have different opinions on either over-the-top truss mounting or under-the-bottom style. The difference between the two is simple. Typically trusses which are installed over the top of an axle housing are loaded in compression (compression-mounted), and trusses which are installed under the axle housing are loaded in tension (tension-mounted) – see diagrams. Tension Mounted Truss
​
The load can be safely utilized in compression or tension without a major amount of steel; but when you consider ground clearance, installing a truss over the top of the axle is the only feasible option. The reason is obvious. Some companies create a truss, which requires tensioning of the rods. First of all, there are no instructions as to how much tension a 12-bolt axle housing requires. So just how much tension shall I apply? Your tension-mounted truss is typically not properly tensioned because of lack of instructions, then after one whack with a rock and it’s not even in tension anymore. If your housing has survived this trauma then other things can happen. The housing now flexes up and down at the center section, thus rendering the tension truss useless. Every time you are putting more load on the beams of a tension-mounted truss, you are tweaking the housing two fold. So, when your truss beam skids across a rock, that very contact is putting stress on your axle housing and could possibly cause problems. Granted, there is a difference between a truss and a skid plate. Most of the trusses on the market with optional skid pates would be considered more of an anchor than a skid plate. The low hanging beams catch on rocks and mud. They are difficult to keep cleaned out and promote pinion seal contamination. I feel the bottom of a 12-bolt center section is more than strong enough to be its own skid plate, without causing problems to the rest of the housing. Enough mumbo – jumbo, lets see the parts.

The Missouri Offroad Outfitters truss has 4 mounting points, which solidly mount the truss to your housing. This truss requires no tensioning of the axle housing and keeps the static load at zero. So, your axle housing is not stressed in any way by installing this truss. Once mounted, this truss will not move and will never be peeled backwards by rocks or stumps. The mounts for the axle tubes are of a “Clam Shell” design. Meaning, the tighter you tighten the bolts, the firmer the grip on the axle tube. The bars which make up the truss, are solid 1 1/4” diameter mild steel. The front mounting plate is 1/4” thick mild steel and the rear mounting plate is 3/16” mild steel. The truss is fixture welded, and test fitted on a bare 12-bolt housing. All hardware is provided for the installation. 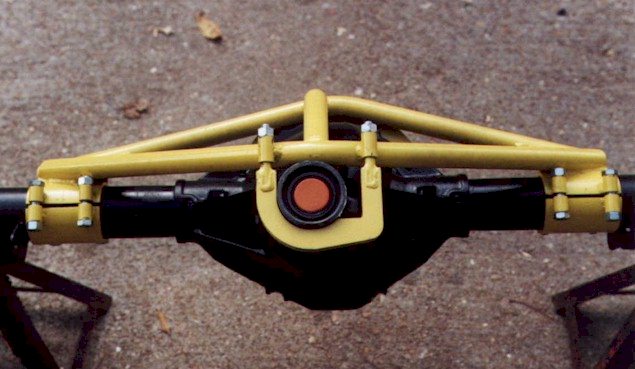 The Missouri Offroad Outfitters differential cover is precision cut from 3/16” mild steel. This is a very tough cover and is better than the new differential guards offered on the market today. The Rock Bruiser differential cover is available with options. Who ever heard of options on a differential cover? Well they have you covered, no pun intended. There are several options, which I added to my differential cover. I opted to have the drain plug and the bearing pre-load adjustment bolts, and it came pre-painted. The first notable feature I noticed was the built-in skid plate, which keeps the bolts out of harms way. The cover ups the fluid capacity from 2 quarts to 3 quarts. All joints on the cover are Mig welded and look great. All bolt holes are chamfered for a finished look. The cover is fixture welded, and test fitted on a 12-bolt housing. All hardware is provided for the installation. 12 Bolt Cover
​
I read the instructions for mounting the truss on my 12-bolt axle. First of all, I removed the old brake line retaining clamps from the housing. 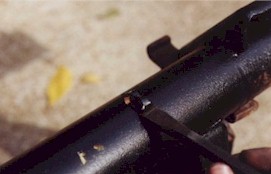 Once all bolts are installed, tighten them firmly. Next, install the clam shell lower halves. These are marked with dimples on each half to make sure it is installed correctly. Install the 1/2” bolts and nuts loosely. Next, install the front mounting bracket, washers and nuts. I tightened the front bolts down evenly until the truss seated firmly on the front housing snout - see Step 3 below. Next, I tightened the clam shell mounts until they were all tight - see Step 3 below. The final installation was to tighten the pre-load set screws to 10-15 ft lbs - see Step 5 below. I coated the threads of the pre-load set screw locking bolts with some thread sealer and tightened them down. I removed the fill plug from the axle housing and poured in 3 quarts of differential oil and checked for leaks. Just to be sure, I re-tightened all of the cover bolts. Next thing to do was to test it out. 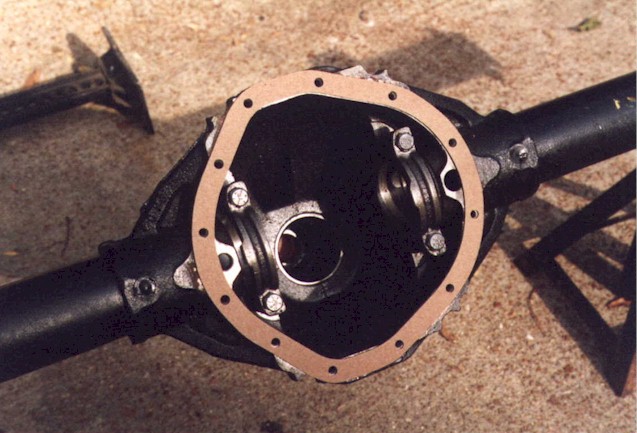 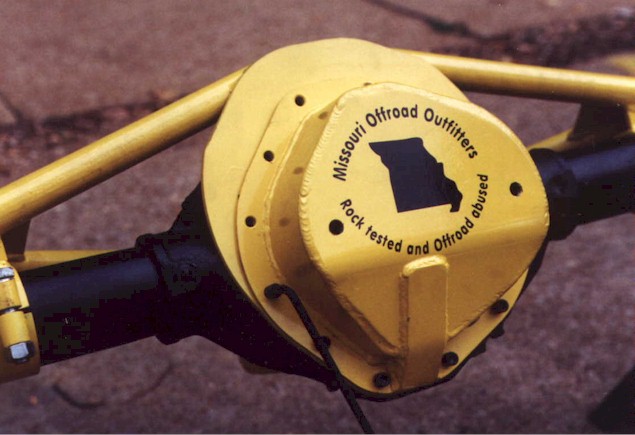 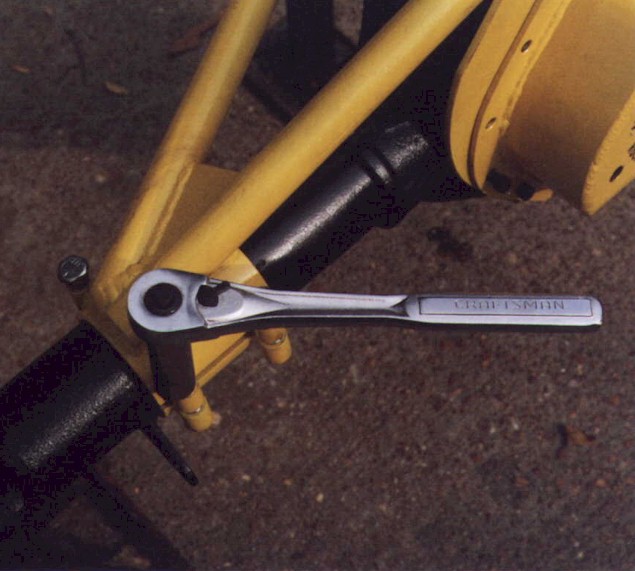 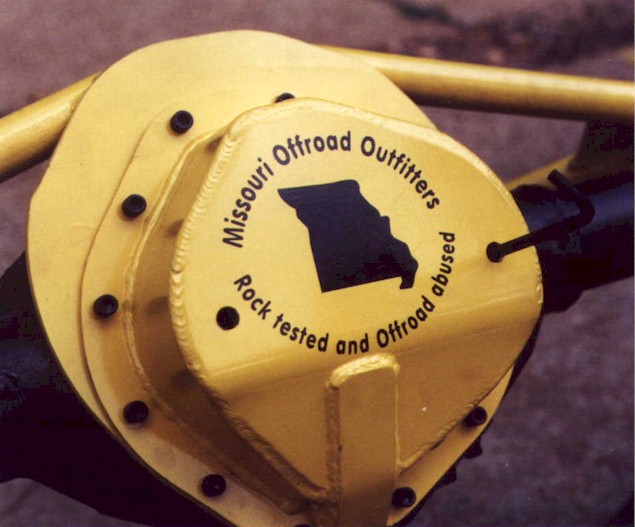 Now comes the fun part, we loaded up all of our gear and drove to my local off-road play spots. There are many rock features around so I had plenty of places to test. On several occasions, my axle housing was white in color from all the rock scratches on the bottom. I even drug the new differential cover off a large rock and only suffered scratched paint. The truss worked perfectly; no low hanging skid plates, which take away ground clearance. In fact, I hardly knew the truss was there. After wheeling for a whole weekend I checked all the bolts and found they were all still tight, this means the truss did its job nicely without working loose. In the past, my brand-X truss would have been folded back over the differential cover and needed complete re-installation. This setup takes the abuse 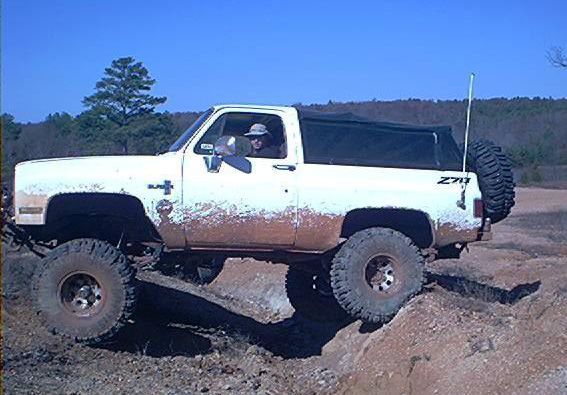 In a crevasse without worries
​
In Summary

With all the maintenance a 4 wheel drive requires, I am glad I have finally installed something which needed none at all. The truss offered much needed clearance under my axle housing and keeps the housing solidly straight. This should improve carrier-bearing wear and increase the life of my ring gear and pinion. The truss costs less than replacing your kitchen sink, so the spouse will be happy with your purchase. The differential cover is a solid unit and keeps my gears safe from rocks. The bearing cap pre-load adjusters allow me to reduce stress on the caps to minimize bearing race warpage and premature wear or failure. I can drain my fluid without wasting a gasket. The differential cover is priced around the same as most aluminum differential covers. Who wants an aluminum differential cover on an off-road rig anyway?

So, if you require parts that are Rock Tested and Off-road Abused, then give Steve Frisbie a call at Missouri Offroad Outfitters. His company also fabricates custom parts for many makes of vehicles. I am sure glad I made the call, now I can concentrate on driving and less on breaking.