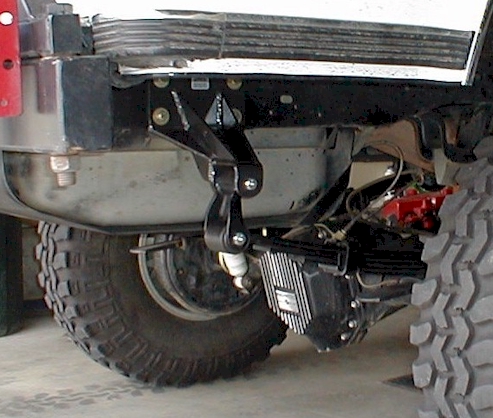 ORD 4" Shackle Flip
​
With the CK5 test Blazer seeing more and more extreme trails as well as 172,000 miles on the odometer, it was way over due for some much needed suspension help. One of the first suspension items to be addressed was the rear 4" lift blocks, with such a great kit offered by Offroad Design to eliminate blocks, the question was, why were we still using lift blocks? Hey, they served their purpose, but it was time to do it right, the ORD brackets bolt to the frame in the factory spring hanger holes and "flip" the factory tension shackle over to a compression shackle. The kit nets four inches of lift so they allow you to use stock springs for a 4" lift, 2 inchers for a six inch lift and so on. Eliminating lift blocks helps reduce axle wrap and using flatter springs generally gives better ride quality and suspension flexibility. This kit is extremely durable with fully welded, ¼" gusseted brackets and all grade 8 mounting hardware. ORD even moved the mounting point forward to give a better shackle angle.

As with so many upgrades, it is often a good time to look at related parts, you know the ones, the parts that you have to take off in order to get to the parts you are upgrading, we've all been there. For our project Blazer we decided while we had the rear suspension apart to go ahead and upgrade the factory rubber bushings to ORD's greasable suspension bushings that consist of grooved polyurethane, drilled bolts with grease zerks, and drilled sleeves. For extra articulation the overload springs will be flipped as well as new spring center bolts installed. While the fuel tank is out the factory in-tank fuel pump will be replaced with a high-flow unit from Walbro. 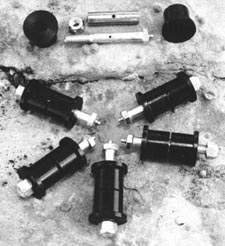 ORD's Greasable Suspension Bushings
​
With a massive shop (OK, just my garage) available to us as well as a virtual plethora of tools (most of them borrowed), and a 12 pack of Mountain Dew, a friend and I began the task of upgrading the rear suspension on project "UAV".

If your flip kit is replacing a stock lift, be sure to get extended brake lines, longer shocks, new locking nuts for the u-bolts and anything else that may be required. If blocks are coming off in favor of the flip, as was in our case, you will need new u-bolts which ORD also carries. Also keep in mind that drive shaft and exhaust modifications may be necessary.
​ 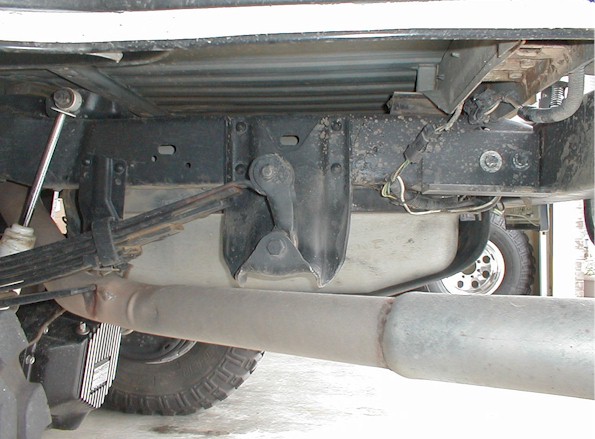 Exhaust Pipe Cut for Spring Removal
​
The next thing to consider is safety, always wear protective clothing, gloves and safety glasses. An extra set of jack stands is good to have for backup, as well as an extra floor jack.

If you are working on a Blazer/Jimmy or Suburban, the fuel tank will need to be removed to allow access to the inside frame rails where the new brackets will be bolted. If you are working on a truck you can skip this step. The best way to remove the fuel tank is empty, so a little planning here will save you the hassle of dropping a full tank. You may be able to make enough room simply by hinging the tank around the front mounts but we found it easier to go ahead and remove the tank fully to get it out of our way. 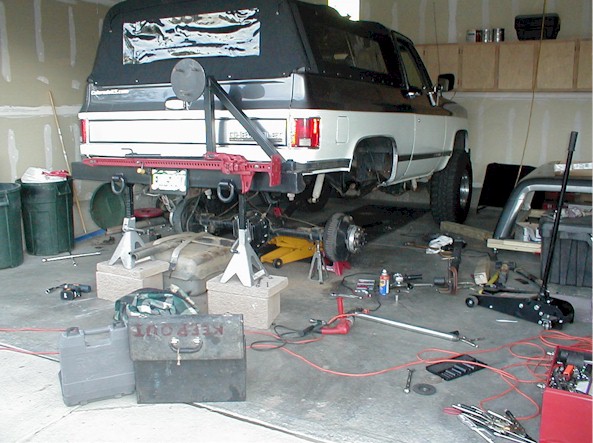 Rear of Frame on Jack Stands 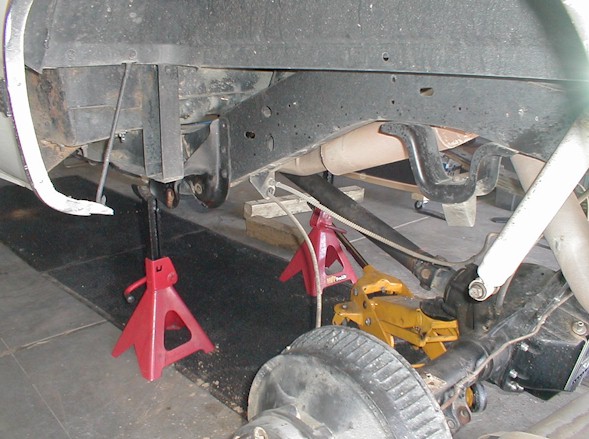 Extra Floor Jacks Under Frame
​
After the tank has been removed, the next step is to raise the rear of the frame on jack stands, since the frame had to be raised fairly high we utilized a couple of sturdy retaining wall bricks underneath the jack stands to obtain the desired amount of lift we needed. The best location for the jack stands to support the frame is toward the rear of the vehicle. We used a floor jack under each side of the axle to remove the rear tires. At this point we removed the u-bolts and lowered the axle to the floor so we could remove the blocks. Because we decided to upgrade the old worn out rubber bushings with ORD's greasable units, we found it easier to first remove the main spring bolt and then the rear shackle with spring still attached could be moved forward to allow enough room for the shackle bolt to be removed. While we had the leaf springs off, we went ahead and flipped the overload spring on each side for further articulation and replaced the center pins, they were found to be badly rusted and about ready to break, the 4" blocks were also rusted to the springs and had to be pounded off with a large hammer. At this point we drilled out the old rubber bushings and fitted the springs with our new greasable ones. 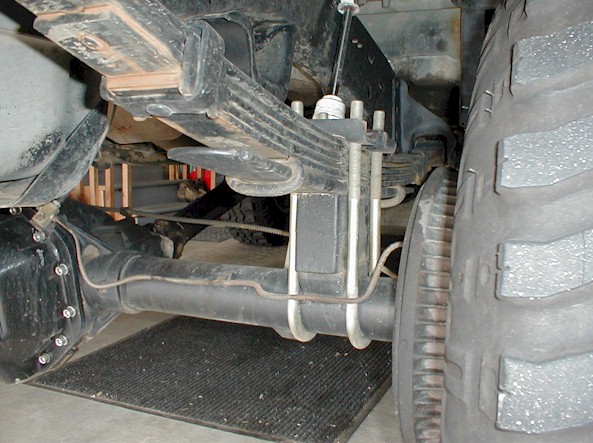 Old 4" Lift Blocks
​
Now comes the real fun, the removal of the 12 factory rivets that hold the stock shackle in place, at this point it is a good idea to bribe a buddy to come over and help speed things up. There are several methods to removing the rivets, an air chisel will cut the heads off or they can be ground with a grinder, drilled out or even cut with a torch. If anyone chooses to do this with a torch, please remember to check for the wires on the other side, roasting your taillight wiring would be bad enough without burning up your truck! Always check the inside of the frame rail. I had heard of someone starting his boots on fire with the torch method so a friend and I decided to tag team the rivets, one with a drill and the other with a die grinder. Even with help, this part of the project took some time as all 12 rivet heads had to be either drilled or grinded off and the shanks driven out.

At some point before you install the flip kit, the factory shackles will need to be removed from the hangers, this sounds easy enough but they are often rusted so bad that it is near imposable to get them out, at this point the factory shackle and hangers were taken down to a local parts store to be pressed out while I waited in air conditioned comfort, hey - someone has to support the local parts house.

After the rivets were removed, the frame holes were then enlarged a little to accept the new 7/16 bolts. The frame was then cleaned up with a wire brush to remove 10 years of rust and grime, next a good coat of rust preventive paint was used to protect the area. After the paint dried, we installed the brackets and used the provided grade 8 bolts with one washer on each side and the pinch lock nuts. The bolts are then tightened to 45 lbs. Install ORD Flip with Provided Grade 8 Bolts
​
Now it is time to install the ORD shackle flip brackets, the first thing you will notice is that there's two different shackle flip brackets. Since the brackets are designed to move your shackle mounting point forward for the proper shackle angle, it is important that the brackets go on the correct side. The angled gussets go the rear and the shackle hanger should be towards the front. The shackle is installed with the closed side forward and the springs are bolted back up. Take a few minutes here to make sure all bolts have been tightened. The axle was still sitting on our two floor jacks, so the axle was raised up to the springs and the new shorter u-bolts were installed without the old 4" lift blocks. If you are lifting your vehicle for the first time you will not have to do this step. After the wheels are installed the fuel tank needs to be put back in place, simply install in reverse order of removal. The last step is to grease the new bushings and take it for a test spin.

Because project "UAV" had 4" lift blocks prior to the installation of the flip kit, the transfer case had already been dropped to allow for the proper transfer case to rear pinion angle which meant nothing further had to be done. If you are installing the flip for a first time lift, the axle pinion angle will have to be measured and compared with the t-case, vibration could result if the angle does not match within 2 degrees.

Currently, ORD carries the Flip Kit in 2.5" and 4" versions for 67-98 GM applications. They are presently working on applications for other makes and models. If you have a Ford or Dodge, keep checking back. ORD also carries stock length u-bolts for flip kit installations that are replacing lift blocks. Flexin in Moab, UT.
​
A week after the install, I had the privilege of testing this new setup in Moab with Steve Watson from Offroad Design, and let me tell you, it worked flawlessly. There were no vibrations at all, and the extra flex gained from flipping the overload springs with the new greasable bushings were evident off road with and added benefit of eliminating axle wrap. I was very impressed with the quality of the shackle flip as well as the greasable bushings, all the holes in the flip kit lined up perfectly and the new bushings dropped into place. Keep in mind this is a big job, but in the end you will be vary happy with the end result.

I'm giving this article a 5 cuz this is exactly what I need to do. Blocks and all. Love the look of these particular brackets and the simplicity. Very informative review of ORDs shackle flip. Thanks
Upvote 0 Downvote
Read more…
Menu
Log in
Register
Install the app
Top Bottom