Wiring of Fog and Driving Lights

Article/photo's courtesy of
Harry, AKA HarryH3 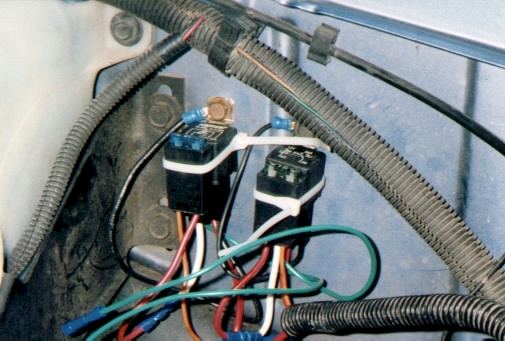 Wiring of Fog and Driving Lights
​
Driving on long dark stretches of highway at night or driving in inclement weather can tax most factory headlight systems. Older rigs can often be upgraded with better lighting simply by upgrading to higher quality headlamps, such as the ones made by Hella. But for newer rigs that have composite headlamps, the solution isn’t quite so simple. This was the case with our 1994 Chevrolet Suburban. The factory composite headlamps could best be described as “barely adequate”. The light pattern is very poorly defined and even upgrading to 80-watt low beam and 100-watt high beam halogen bulbs couldn’t compensate for the poor design of the composite headlamp lenses.

When a nice grille guard that just happened to fit the Suburban fell into our laps, a plan for improving the lighting was hatched. After bolting on the grille guard, we now had a place to mount some driving lights and fog lights. After reviewing the inventory available in our supply of “spare parts we might someday need” in the garage, a pair of IPF driving lights and a pair of Hella fog lights were selected to be pressed into service. 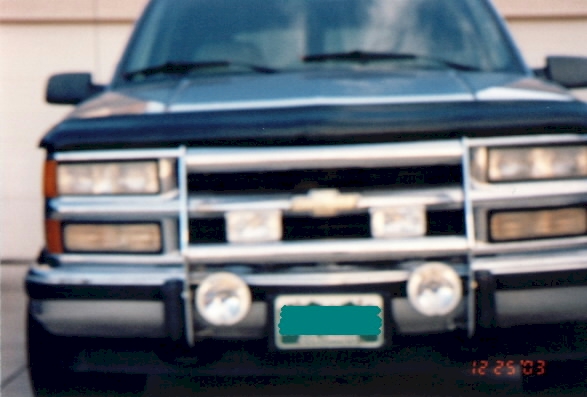 IPF driving lights and Hella fog lights
​
Living in Colorado, where the weather can change from “clear and cool” to “snowing sideways” in a matter of minutes, a wide, flat fog light pattern, with a sharp upper beam cutoff can be very useful. When it is dark and snowing hard, the factory headlamps, even on low beam, reflect far too much light back towards the driver, making it very difficult to see. To be most effective in fog and snow, fog lights needed to mounted as low as practically possible and aimed properly so that they are shining below the eye line of the driver. This minimizes the amount of light reflected back towards the driver, known as backscatter.

Another very real driving hazard in Colorado is the abundance of wildlife that careens out of the darkened roadsides with reckless abandon. Deer, elk, bear, mountain lions, mountain sheep and assorted smaller game can all appear suddenly, seemingly out of nowhere. This is where driving lights can be useful. They throw light much farther ahead than do the factory high beams, giving the driver more reaction time by illuminating objects in the road much earlier. They also help make it more unlikely that you will “overdrive” your lights, which happens when the distance it would take you to stop exceeds the distance at which the headlights illuminate an object ahead of you. When we have the headlights on low beam, the extra wide pattern of the fog lights provides additional illumination along the sides of the road as well.

Driving lights can be mounted higher than fog lights, since you want to get the maximum reflective distance from these lights. The grille guard already had 2 light tabs on the lower cross bar, so the driving lights were mounted there. This put them just below the height of the factory headlights, but still plenty high enough to be useful.

The next issue was where to mount the fog lights. We wanted them as low as possible, without placing them in harms way. Mounting them to the lower edge of the front bumper is excellent for placing the beam as low as possible. However, this places them in the line of fire for hazards both on and off road and was impractical for our purposes. We found that there was just enough room to drill into the side uprights of the grill guard and mount the fog lights directly in front of the bumper. This also lets the grill guard still afford them some protection. (Note that our set of Hella 500 series fog lights have been modified for mounting in this position. In stock form they must be mounted so that the mounting stud is vertical).

In order to have maximum control over the extra lights, we selected a DPDT (Double Pole Double Throw) switch and a pair of lighted toggle switches. The wiring for the lights was configured so that when we set the DPDT switch in "auto" mode, only the fog lights will come on with the low beams, and only the driving lights will come on with the high beams. In "manual" mode both circuits will be powered by the parking light circuit, which will allow having either or both sets of lights on, regardless of which mode the headlight beam select switch is in. It will also allow running just the fog lights without the factory headlights, which works well when it's dark and really snowing hard. The factory low beams can create too much backscatter of light off of the snowflakes.

Each set of lights also have their own power switch in the circuit that allows leaving one or both sets of lights turned on or off, regardless of the position of the Auto/Manual switch or the headlight mode. One huge benefit of having the lights powered via the headlight/parking light circuits is that turning off the headlight switch (which has a factory "lights on" reminder) will always kill power to the auxiliary lights also, so we won't have to worry about a dead battery from accidentally leaving them turned on.

The DPDT switch that we used mounts from the front of the dash bezel. In order to make it easier to remove the dash bezel for any servicing in the future, we used a 6-pin Molex type connector in the wiring behind the dash. This will let us disconnect the wiring from the switch without any fanfare should we need to ever remove the bezel. The wiring for the toggle switches unplugs from the back of the switches, so this wasn't a consideration with them. 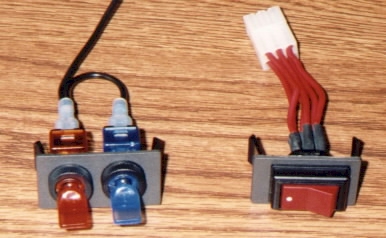 The amber toggle switch controls the fog lights, while the blue one controls the driving lights. The rocker switch is the DPDT switch that controls the power source for the other two switches. (See wiring diagram below). 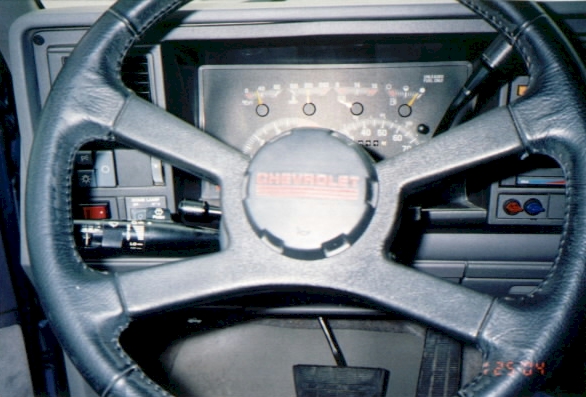 Here you can see the switches as installed in the dash. The DPDT switch is mounted near the main headlight switch. The toggle switches are mounted under the radio, in some blank factory knockout panels.
​
To provide maximum voltage to the lights, while at the same time running only a small control current through the in-dash switches and wiring, we used a standard 30-amp automotive relay and pre-wired connector for each circuit. The small current provided from the headlamp or parking lamp circuit is routed via the in-dash switches. This will energize each relay, which will then complete the circuit between direct battery power and the lights to which it is connected. The relays are mounted under the hood, near the power source and the lights, to keep the main power wiring short.

One word of caution! Many pre-wired automotive relay harnesses come with wires connected to both pins 87 and 87a of the relay. Pin 87a is a normally closed circuit that is HOT any time that the relay is not energized! If this wire touches ground, even with the truck turned off, it will blow the main heavy power circuit to the relay. Either cap off the end of the wire that comes from pin 87a securely, or remove the terminal for it from the connector. We chose to remove the terminal and wire from the connector for a cleaner installation.

Terminal and wire removed from the connector for a cleaner installation
​
On our rig, we tapped into the brown wire coming off the back of the main headlight switch to get power from the parking light circuit. The tan wire from the high/low switch (on top of the steering column in our rig) provided power from the low beam circuit. The light green wire from the high/low switch provided power from the high beam circuit. (We had 2 light green wires that came from the same connection point on the switch. However, one was much smaller wire gauge than the other, which we believe sends power to the in-dash high beam indicator. We tapped into the larger wire to provide power for the relays). There's a wiring diagram below.

In order to deliver power to the main heavy power side of the relays, while still providing the wiring with protection from a circuit overload, we utilized something that we found under the hood of a late model Ford car (gasp!) in a junkyard. Attached to the battery side of the starter solenoid we found a 10-gauge wire with three 16-gauge fusible links coming off of it. We connected the 10-gauge wire to the output stud of the alternator (be sure to disconnect the battery first!) and then connected the wiring using one separate fusible link to provide the main power input for each relay. The third fusible link was simply capped off for now. It may be used for another project in the future. 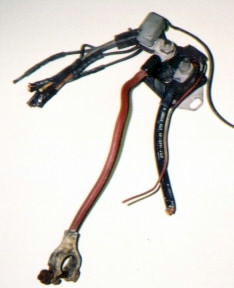 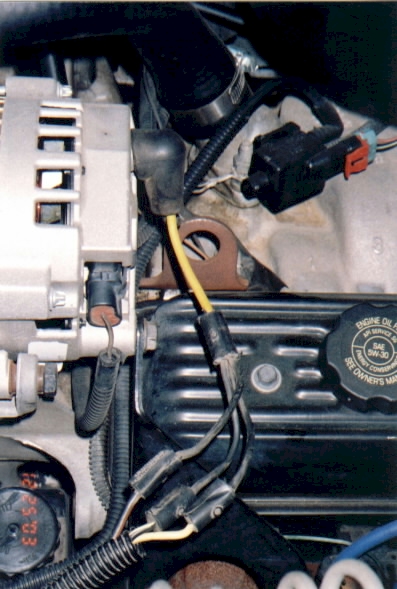 Here is the power feed with fusible links wired to the alternator output
​
As a side note, for those of you that may be wanting to install even more lights and circuits, look around under the hood of some newer (87 and so or later) Buick sedans while at the junkyard. On some of them you'll find an extra battery cable coming from the battery to a beefy power distribution block. The block is housed in red plastic and mounts to the top of the firewall. It is usually hidden by a black plastic cover that is easily removed. The great thing is that they also have 6 or so fusible-link-protected circuits going to supply power to different parts of the car. Something like this can save you a lot of wiring time. Just connect each fusible link protected circuit to the input side of a relay for the circuit that you want to control. Here's a picture of the Buick power feed to give you an idea of what to look for: 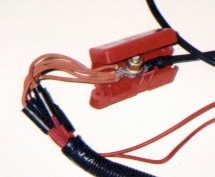 Buick power feed
​
Many late model GM's also have a "rack" of relays under the hood, usually attached to the firewall. A set of these will be used to power lights and electric fans on our 1975 K5 in the future. There are four 30-amp relays and two 40-amp relays on the rack that we found. We also took as much of the wiring harness as possible, to make it easy to wire them up while retaining the factory Weatherpack™ relay connectors. Here's a picture of the relay rack to give you an idea of what to look for:

GM relay rack
​
We also installed a 15-amp ATC style blade fuse in the circuit on the output side of each relay, so that if the wiring to the lights should get shorted to ground, the easily replaceable fuse will blow, rather than melting the not-so-easily-replaced fusible link. The fusible links are there as a last line of defense, to prevent starting a fire should the main power feed to the relays ever somehow get shorted to ground.

To say that we now have much better lighting on the road ahead while driving at night would be an understatement! The difference is almost, ahem, like night and day. 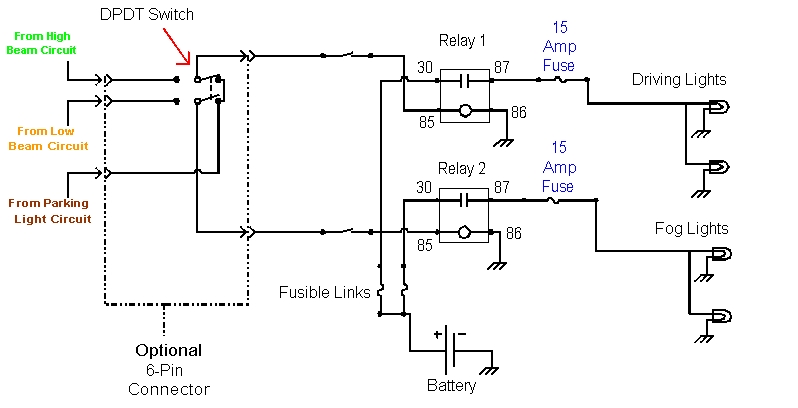