now you've gone and done it.

I'll wait for the pics but if you need something, I've got parts,
...maybe even another windshield frame.

I agree though, just something attractive about a naked K5.
(for lack of other superlatives)

Any recommendations for things you've used and liked? I was thinking about some 4-1/2" cup-style silicon carbide (looks like scotchbrite texture) discs to start cleaning the paint off the metal to see what's really underneath. Looking for something that won't be overly aggressive on the metal....just the paint and bondo.

I've used a scotchbrite type pad on my frame before and it works incredibly well. I'm sure it will take paint of body panels effectively but of course start with a pretty fine pad and work your way to a courser pad as needed.

Yukon Jack said:
I've used a scotchbrite type pad on my frame before and it works incredibly well. I'm sure it will take paint of body panels effectively but of course start with a pretty fine pad and work your way to a courser pad as needed.

I'm very familar with the "might as well . . ." afflection. The 69 K20 was getting the sbc to bbc swap and the "might as well" afflection ended up having the truck body yanked from the frame and stripped down completely - needless to say, the illness got me good!
Click to expand...

Yeah, these photos show a lot more "hammering" of the firewall than I'd previously realized had been done. This is even WITH a 2" body lift, so I can imagine how much extra room is needed for the valvecovers without one...

Summer before the last one! I said might as well, I was watching my daughter and figured I'd do a tune-up while Mom was at Yoga. I was ansewering questions about the sky and roses and the dog and why is it called "Hugger Orange" when I cranked a plug the wrong way and snapped it off in the head.

Might as well do that crate motor now, and new acessories, and that B&M shifter, Electric Fan, MSD, I hated that Carter Carb, "Hey Honey, I miight as well order that SW rollcage now." "Yep, might as well..."

Might I recommend - american autowire for all you're wiring needs & heatercraft for a replacement heater.

I used a highway series kit from AAW on my K-5 & a 200 series from heatercraft on my TJ, but I'd probably recommend a 300 series for a blazer or 2 of the mohave's from summit.

In relation to the "Lower windshield area. Goopy stuff in crevice has factory color paint on it. Was this a factory seam sealer between frame and cowl?" I think my K20 als had some heavy areas of sealer in that location. I had a bit of rust on both sides of my cowl, just below the windshield area.

What color you going with when you repaint??

What color you going with when you repaint??
Click to expand...


I was thinking about a light blue similar to some of the Corvette colors from that time period (Marina Blue, Elkhart Blue, Nassau Blue).... but the missus really likes the look of the factory Medium Olive. Must be something to do with a previous BOTM winner and the truck he showed up in once.

Just got back from the local HomeDepot with a few 3M abrasive disc samples....I'm going to sneak outside and see if any of them are going to work well and still be respectful to the underlying sheetmetal.
Last edited: Jan 7, 2008

A few shots AFTER some cleanup....


Passenger side lower windshield area. The only spot with heavier rust seems to be the area behind where the goopy factory putty was... otherwise it looks pretty clean.

Some typical pitting I see a lot. The metal stays dark even after grinding....never turns the light silver color. The pits aren't deep, but I don't want to just leave them untreated.....would an etching primer be effective enough for these, or should I do something more serious?

The previous owner sprayed rubberized undercoating all over the cowl and firewall areas....I can grind it off, but it gums up the pads. It looks like I'm back to my old trick of using about a case of Brakeleen and some old toothbrushes to clean things!!!

Greg,
Only sand blasting will truely show what's really there for rust.

To remove paint we use a few different methods.
2" & 4" scotch-brite discs
Also those rubber fingered discs work well too.
Of course, sand blasting.

Nice tear down, it's gonna be well worth it in the end.

Another dash option could be to 'only' replace the radio area, done that before too.

Sandblasting at this point will be a challenge due to the crippled nature of the truck....but I understand what you're saying about going "all the way" now that I'm 95% there. The discs are revealing a few ugly spots here and there, so I already know SOME of the work I'm going to need to do.

I think my best approach is to do the repairs I can see easily now (without sandblasting) and the boatload of custom fabrication in the firewall and transmission tunnel area to fit the new driveline the way I want it to reside.... then once I have all the mechanical items mocked-up and solved, blow the whole thing apart and send it to a media blaster to reveal all the final rust repairs that need doing.

Something else that I found that is weird....the front floors seem REALLY wavy...most notably on the passenger side. The flat footwell area is wavy and the area under the flip-forward seat seems to have quite a bit of "wave" also. Not sure if it's just really thin metal or broken supports in the rockerbox area or what, but I've got it down to bare metal and don't like how it looks...... Don't suppose you have good floor sections you'd be willing to part with????

Gawd, this last 48 hours has been both an exhilarating and terrifying time..... my K5 is about to make a huge step toward greatness and the type of finish-quality that I've always wanted.....but I'm just adding up the hours and dollars that are going to be needed with each square inch of rusty metal that I reveal.......

PS. Pulled the tranny tonight, and learned that there is a tremendous amount of fluid between the tranny and NP205.....at least there WAS before it all poured onto the floor! Also, there is so much weight removed from the front of my truck now, that I had to remove the tires to get it back down to a reasonable working height again.

Greg, you might want to give Castrol Superclean a try on that undercoating. That stuff removed alot of the goop that was on my firewall very effectively. May or may not make a difference on the undercoating. Do wear hand protection as that stuff will leave your hands in bad shape! Your cleanup is looking very good so far.

Keep the big picture in mind but work the project one section at a time to keep from getting too overwhelmed. There will be times when you look at your vehicle and think what have I done, how can I get this back together - take a break during those panics, pop a beer, relax and then refocus - that worked for me anyway.

I tried a razorblade scraper with limited success last night... it's one of those things that can't be cleaned easily with any one method, so I'm just going to have to chip away at it and spend the time to get it all removed.

My mantra on long projects (K5 or otherwise) is that no matter how long it takes to do a single step....the time required is FINITE, so as long as I'm spending time on it....eventually it WILL get completed.

I also break up the monotonous tasks by doing other things that need doing....last night when I got "angle grinder boredom" I just took a break and pulled out the transmission. Next time I get bored with paint removal, I can pull the NP205.....

Before too much longer, I'm going to need to build a set of door braces to stabilize the body when I start cutting the rockers out. I was thinking about a small piece of All-Thread welded to some square stock and then mount the ends between the door striker and the upper hinge plate. I can use the threaded area to fine-tune the door gap (there's a good chance it's ALREADY sagging) before I graft on all the new sheetmetal.

Looking good Greg. If you were about 3000 miles closer i'd be helping you like old times.

Speaking of old times, if you were 3000 miles closer i'd have pulled my engine in a nice big indoor man space.

Either pm or give me a call on the sheet metal you need, I do have a blazer tub out back that could very well become the donor for your project.

I'm halfway across the firewall area with my little 3M pads and 4-1/2" angle grinder. I found that if I use VERY light pressure and an old pad I can get the rubberized undercoating off pretty cleanly with only a little melting and smudging left behind. A clean pad and second pass takes it down to bare metal from there.


I also pulled off the front shock towers and shocks, steering box and draglink...they were starting to get in my way and were bugging me. 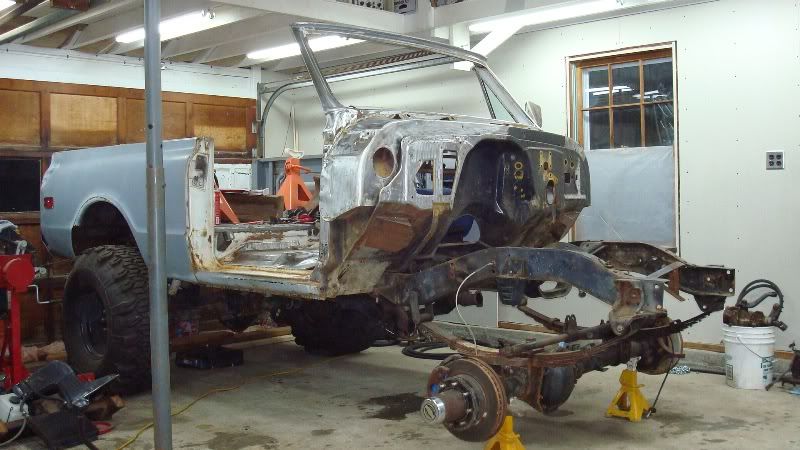 Oh yeah....as promised, I also yanked the NP205 and rear driveline out tonight when I got bored with all the grinding. I made it most of the way around the windshield frame on the inside, and across the top....and carefully removed those rubber caps at the top corners of the windshield frame. The screws were rusty, but I was able to get them out cleanly and without damaging the captive nut on the back side of the metal. 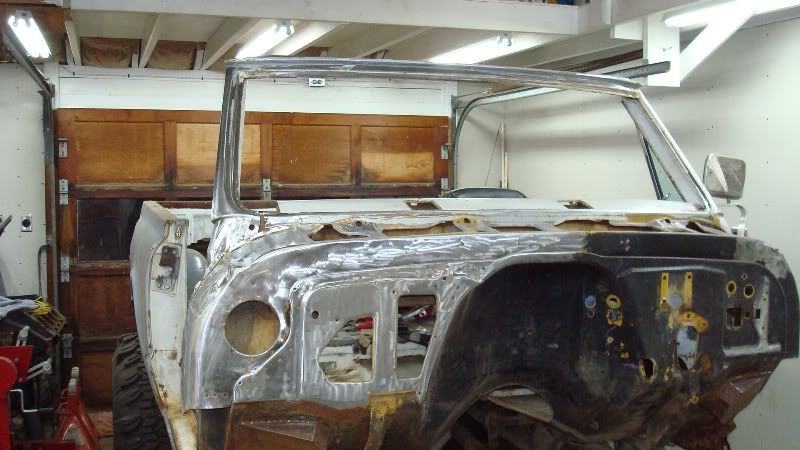 A shot down the inside of the door hinge area. This is remarkably solid which makes me pretty happy. 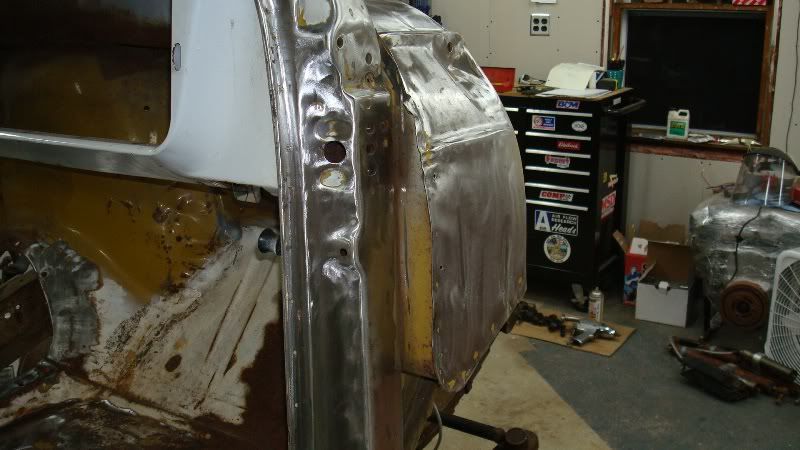 A shot of how much further the cowl sticks out relative to the hinge/jam area of the door. 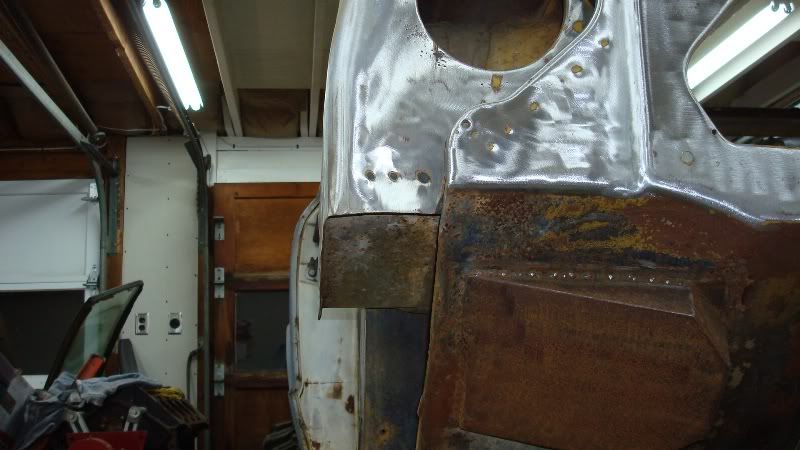 I'm trying not to spend much time removing paint from panels that I know are going to get replaced anyway.....yeah, I know it would look cool to see the entire door opening as shiny metal, but it's not going to happen folks!

Off to grab a shower and a cold beer.... and not necessarily in that order.