Damn Greg, you've been a working fool as of late. Guess all that insulation and sheetrock brought on a new beginning. Looking good. Can't wait to see more pics as this thing develops.

One of the things I did when I replaced my rockers was to use the small drain hole in the bottom to get the spray nozzle of some rubberized undercoating up there to coat the inside of the rocker box after it was welded back up. Perhaps you can do something similar through some kind of access hole in the cowl vent.

This stuff really works great. I painted my axles with it and then painted over it with spray paint. A few days later I spilled some brake fluid on the axle and it removed the spray paint but not the RustBullet underneath.

Not much to report, since most of what I've been doing lately is battling the flu.

Here are a few shots to keep you going....


First, here's what a box of reproduction Blazer sheetmetal looks like 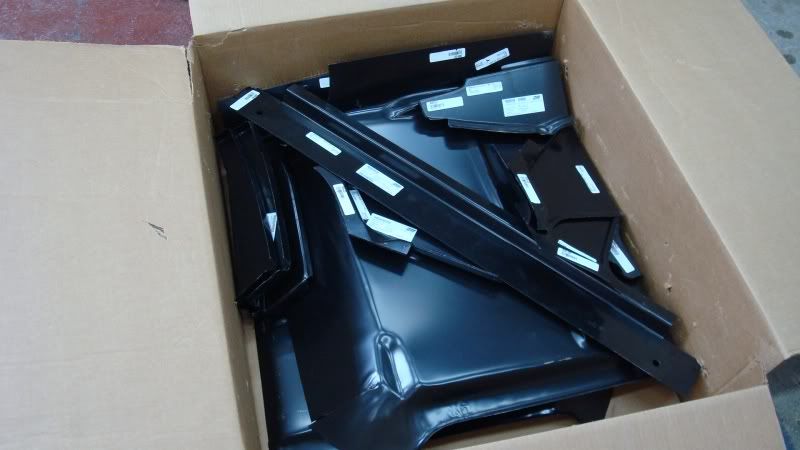 And here's how it looks when you spread it all out to admire it... 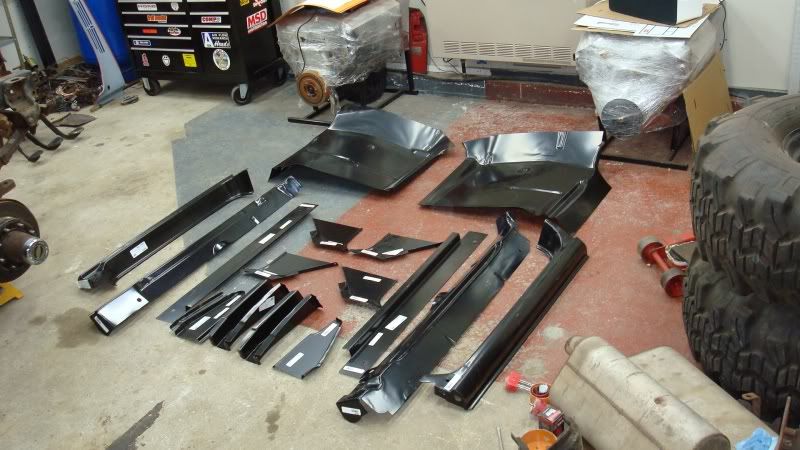 That pile contains all the "basics" for 1st Gen rust repair: Front floor sheetmetal, Front cab supports, Door jams w/integral inner rocker (nice!) and the outer rocker panels. Some smaller triangles are for patchwork of the vertical footwell areas, and there are some parts to go up into the B-pillar area as a tranistion from the rocker panel itself. Almost everyone needs these parts once they commit to doing rust repair. The lucky folks can stop here....the less fortunate need a LOT more than this to complete the job.

Seeing as how I am not feeling 100% yet, and don't quite feel like diving all the way into those new panel replacements quite yet. I decided to practice a little more sheetmetal welding (aka: burning holes in 18GA). I started removing the extra lip from the firewall where it is spotwelded to the cowl.

Here's a shot of that vertical lip ground all the way off (passenger side) and welded up: 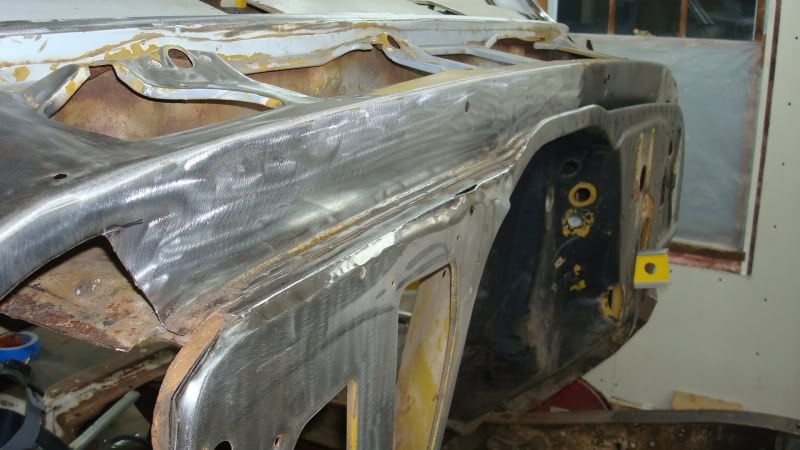 Another shot to help show the original vs. new configuration... you can see how it transitions from the modified section just as it gets to the drivers side of the cowl, just above the mounting holes for the gas pedal: One last attempt to show the change. It gets a bit strange in the center, since it's basically just two horizontal pieces of 18GA sandwiched together....very delicate looking... That's all for now. Maybe there will be some hours available this weekend for me to start the "real" cutting and repairing of that passenger side floor and cab support area.

The flu. No fun at all. I was wondering why the build was so quiet. Hope you get to feeling better. That's plenty of new sheetmetal to keep you busy!

So what made you decide to knock off the lip? Looks like a nice touch, really cleans it up.

It's VTBlazer's fault.... he suggested it last weekend when he was visiting, and I liked the idea.

Why are you letting that harmonic balancer rust up on that BBC i built? You better take care of that before you go any further on any of this sheet metal work.

Also make sure you turn those engines over at least once a month while they're sitting there.

Anything not wrapped in plastic gets rusty....that's life.

How many complete rotations of that damper should a make each month...??? Seeing as how I've never rotated them, is it already too late?

I envy you. If i was even a little bit sick i am useless. Nice sheetmetal BTW. Guess you just figured what you'd need and ordered it all the one time??

I'm really gonna have to start on mine

Where'd you get the door jambs with integrated rocker? That would have been so much better than the inner rocker panel I got from LMC. That was almost useless in my case.

bp71k5 said:
Where'd you get the door jambs with integrated rocker? That would have been so much better than the inner rocker panel I got from LMC. That was almost useless in my case.


I think these were actually supposed to be for truck applications (not Blazer) but it turned out to be a fortunate mistake.

Greg72 said:
Anything not wrapped in plastic gets rusty....that's life.

How many complete rotations of that damper should a make each month...??? Seeing as how I've never rotated them, is it already too late?
Click to expand...

Paint is your friend.

You wanted me to leave that engine unpainted so you could do a nice prep job and paint it. Anything that is bead blasted and bare steel will rust very badly as all the oils have been removed.

You should give at least a full revolution (two crankshaft rotations) each month. Even better if you just slap a socket on the front bolt and give it several turns every couple weeks. This keeps the rings from sticking against the cylinder walls. Moisture in the air is enough to make the rings rust up against the cylinders. Keeping the engine rotated once in a while also keeps the valve springs happy.

I want my valvesprings to be happy .....so I guess I'll do some calculations on how many months behind I am and then do some "catch up" rotations.

Then I'll setup Microsoft Outlook with some "rotation reminders" from now until the motor gets installed.

Shouldn't be more an another year or two.

The following photo sequence is very graphic in nature, and it shows parts of an early Blazer that most people will never see. This may scare you....so if you have a weak stomach, or don't want to REALLY know what's probably inside your own 1st Gen floorboards and rocker panels.....you should navigate away from this thread now. I picked up a set of nice Martin hammers & dollies from Sears. I've reached the part of the project where these are a must. As you can also see, I bought a seam busting tool which has proven to be VERY valuable already....

Start of the day photo: This is what you've seen before. Just a truck needing attention, but not getting it...since I was sick with the flu for the past week. The first thing I had to do was add a diagonal brace to my door bar, since I knew I'd need all the extra structural support I could get later on today. 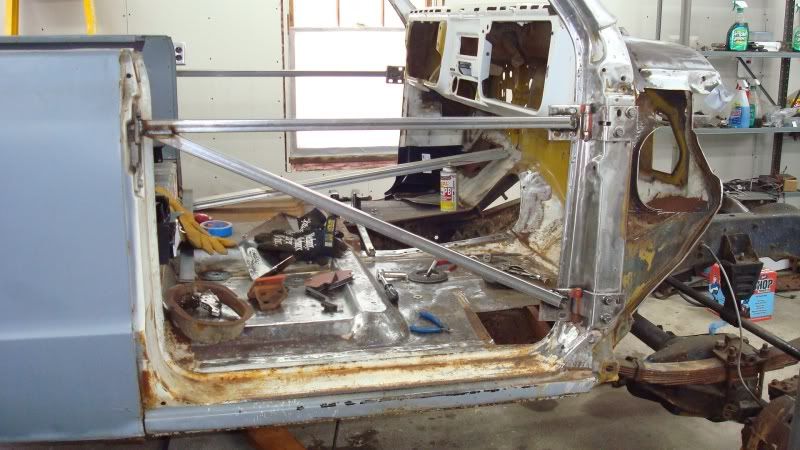 Nothing left to do now but cut off that outer rocker and embrace the horror... Nice Beach!

Plus a better shot of a "non-factory" galvanized inner rocker repair. Creative, but poorly executed. Let's remove that galvanized vertical part and see what is behind it.... I cut out the passenger floor (since I have a replacement pan anyway) and found this: 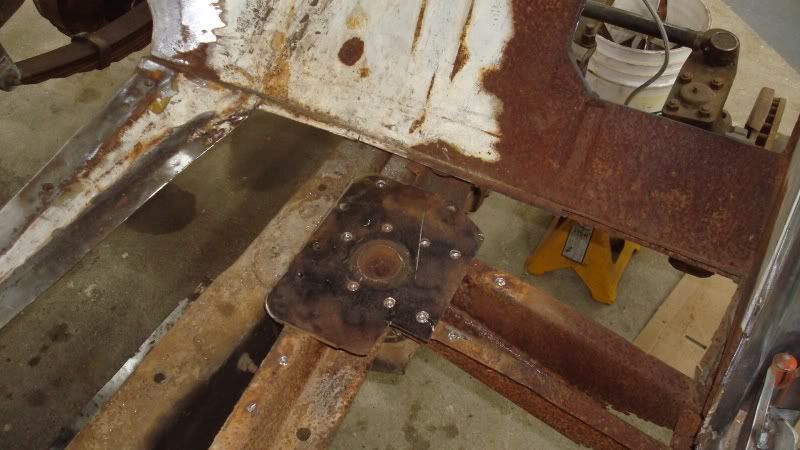 I'd seen photos like this on other threads but didn't really understand what it was. It's an extra support below the factory floor sheetmetal to strengthen the bodymount area. I accidentally clipped off a corner of it before I realized it was under there....I'll need to graft that back on later.

Removing that extra support (by cutting the spotwelds) reveals this: 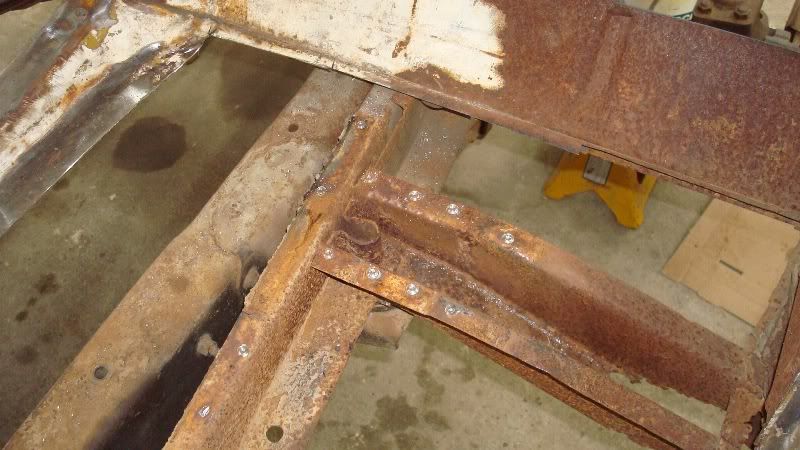 There is a cool curly metal tab welded in there which acts as a "guide tube" for the body bolt. After a LOT of careful cutting and gently prying in the "Four Bolts" area of the front cab support, I was able to free up the backing washer that was originally sandwiched between the inner rocker, outer rocker and cab support sheetmetal. Here's a shot to reference where it will go on the replacement part: 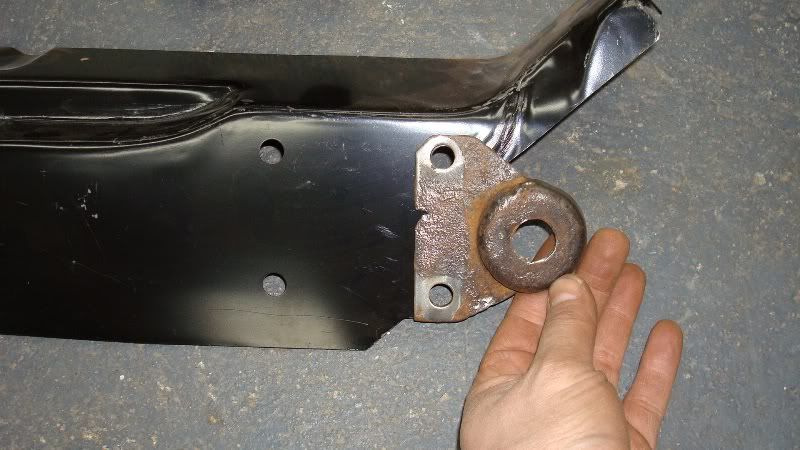 And here's the final shot of the "Four Bolts" area after a LOT of gentle work and PB Blaster on the bolts.... You can actually see through the brace on the lower left corner, just above the welded nut. The metal is VERY tender in that area.....it's paper thin and it was hard to get the rusty bolts out without tearing that whole lower corner off.

I don't have a replacement part for the extreme bottom of this area... It's basically solid until about 4 inches from the bottom. I am fairly certain this is available as a reproduction part, but I didn't order it initially. I'll have to check the parts books again. It might be easier to work with a new part, than try to patch the existing one.....which leads me to my next topic:

At this point, I am beginning to learn the nature of reproduction sheetmetal a little better, and starting to understand what people say when they explain that it always "needs some work" to fit right. Case in point: The front cab support is a generic part (fits left or right sides) but when you actually study what is on the truck you realize that the ends and tabs that weld to the truck are angled slightly. The repro part is not. I understand that it's easier to make ONE part that almost fits rather than stock TWO parts that are 90% the same and fit perfectly. Things like that are not a big deal, but they will add time to the repair.....which brings up the second observation:

Almost nobody can afford to pay someone else to "LOVE" their truck and lavish it with the time needed to do these repairs correctly. Making things fit right and look right takes HOURS and HOURS.... it's proving to be a very rewarding experience already, and I have a new respect for the guys who have already been down this road with their own trucks and completed the job!

It was the best Sunday I've had in a long time...

Wow Greg - That is awesome - you are an inspiration for the rest of us!

Thank you for the great pics for us web-wheelers!

But now I'm afraid what lays behind mine - LOL

Wait just a minute... what the heck am I looking at here? Is there a huge room underneath whole of the floor, or is this just the rocker area? Looks like a helpful asset for drug smugglers.

Also, what state does this truck originate from?

These pics make me shudder! I just went through all of this on my 72. I spent upwards of 3 hrs sandblasting all of the rust out of the inner rockerbox area

. Then primed with epoxy primer. Notice the pic of the front cab support on the extreme right area of the rocker box, mine was rusted about 1/2 way in medially on the right side. The left side was gone and had to be replaced completely. Not for the weak of heart for sure!

Save yourself some grief and order up the lower pillar section, nice save but it's so thin you really should replace it.

I'll be right behind ya, starting on the K5 tub in the shop this week myself.