I mounted mine that way, and never could get it tuned right until I ran a wire from a solid ground to the base of the antenna. Most mounts like that just don't get a solid enough ground signal for the antenna to work right. They are still pretty directional, but that can be overcome by dual antennas.

munepit, what brand and length is your antenna?

KansasTwister said:
munepit, what brand and length is your antenna?
Click to expand...

It's 4ft. long. It says Freightliner on the tip. I did get it at a 18 wheeler dealership.

I'm going to do something stupid now(I do this often). I'm going to add up all the reciepts for the last yr. and a half. Dammit, its not going to be good.

How tall is the antenna and does it hit your garage?

Anybody ever mount a bracket on the B-pillar?

A guy locally runs a ball mount on the B-pillar of his F350. Seems to work good. Just gotta cut a decent sized hole (1" I think ) hole to get the mount setup. But, it's weather proof and your coax doesn't have to go through any body seals or be exposed outside the truck.

There are companies that make mounts that go between the fender and hood on the front and I've seen several guys mount an antenna on the cowl panel on the driver's side.

You want 2/3's of the antenna above the highest metal point for good performance. Best is to have it whole thing mounted ON the highest point, but I'm not a fan of that either. If it was on something that didn't go into the woods, I could probably pull that off, but both my XJ and K5 are in the woods a decent amount and I'd wind up with funny shaped roofs.

So if (for obvious reasons) you didn't want an antenna smack dab in the middle of your roof. What would be the next best placement? I was thinking either dual Firesticks on the mirrors or a tied down 105" whip on the rear bumper.

I have a 102" whip mounted on the rear hatch of my XJ, about 6" below the bottom of the rear glass. I get about 1.2:1 SWR with it mounted there on a 4" extension instead of a spring to make it 106" (the ideal electrical length for 11m CB). Don't overtighten it though, the base is brass and will tear the threads off it.

If you tie it down, you change the polarization of the radiated signal and lose about 70% of your signal. Being that legal power of a CB is 4W, you're losing just under 3W of your power with it laying over. I let mine swing and have had no problems with anything except drive-through windows. It bangs around, but hasn't damaged anything. I've had it there for over 3 years now I think. I had a 4' fiberglass Wilson on there before, but it wound up breaking on me in the woods. Even with a spring it flexed enough to break the solder joint for the conductor and I never could get it soldered back with the correct resistance. Also I couldn't run the spring on the road, it wouldn't control the weight of the 4' antenna.

readymix said:
Mine is mounted to the lid of my toolbox.

So if I mount a magnetic mount like on the tool box like this is it going to be directionial? I just think I will be pulling it off the roof all the time where I go.

If you want to have maximum power out of your antenna, you need to have it clear at least 3' above the highest point of the truck.
You will still get a signal that way but you will be blocking most of the signal by the truck body.

80' 427 said:
So if I mount a magnetic mount like on the tool box like this is it going to be directionial? I just think I will be pulling it off the roof all the time where I go.
Click to expand...

You shouldn't notice it if it does get a little directional. I've talked ~13 miles off the weak side of my Jeep while moving. It may possibly be strong off the rear of your truck since it doesn't have the top of the cab blocking signal, but I'm just guessing about that.

So I've been running a K40 mag mount for a couple of years and I'm ready for something permanent. The mag mount on the top of the roof actually performs pretty well, but it gets knocked off by tree branches. I'm already airing down to get in the garage, so I can't afford losing the overhead clearance either. The wire is getting damaged by running through the door. I would run it out of the topper seal, but then there is no way to remove it without pulling the topper.

So I'm thinking to go 102" whip, mounted to the DS corner of the rear bumper. Compared to a body moutn, a bumper mount should make for less "kunk-kow" noises inside as the whip hits stuff and the fiberglass top sort of exposes more of the antenna. I will drill a hole in the steel plate bumper for the mount and if I change my mind later, just fill it with a bolt or something.

Any better ideas? What kind of mount is sturdy enough for the whip + spring?

munepit said:
Mounted like I have, Its grounded to the body.

The mirror post has a plastic sleeve on it inside the door mount. Maybe this is to get the right sliding friction, maybe it's to prevent the post from rusting in place. At any rate, it's not an ideal ground. Plus that bracket is painted and you don't know how well the door hinges are grounding to the chassis.


lectric80 said:
Mine is mirror mounted, but I did have to run a ground wire to get it tuned.
Click to expand...

simplysigns said:
The ground is the key. I always run a ground wire straight to the negative on the battery. Might be over kill but that is where your ground comes from. So why not go to the source.
Click to expand...

The battery is the source of DC power for the radio, but has little to do with the RF output of the radio. For antenna purposes, the sheet metal of the vehicle is the ground.

Blue85 said:
Hey, what about mounting the antennas right into the mirror casings? For mirrors like this: 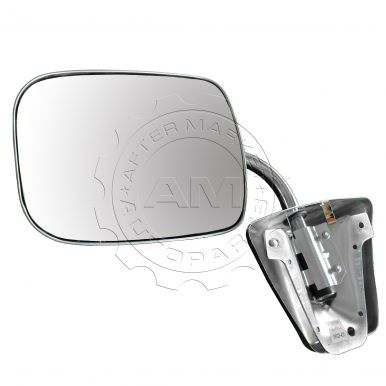 Instead of using one of those clamp-on brackets with the bolts sticking out and coax hanging out - put the insulated stud right through the little stainless housing on the side of the door. Then the cable can be routed inside the mirror mount and you would never see it. Anybody ever analyze the amount of space in there?
Click to expand...

it's a pretty tight space inside because of the large bracket and the bolts used to tighten it all into place!
Click to expand...

This was my project for today. I welded a bracket onto the door-mount bracket as flush to the stainless casing as I could. Then I put a hole in the stainless to match. The antenna cable runs inside the door and through the rubber wiring tube with all the power window/ door lock wiring, so you can't see a cable anywhere. Of course I had to solder the connector on after it had passed through all of that. 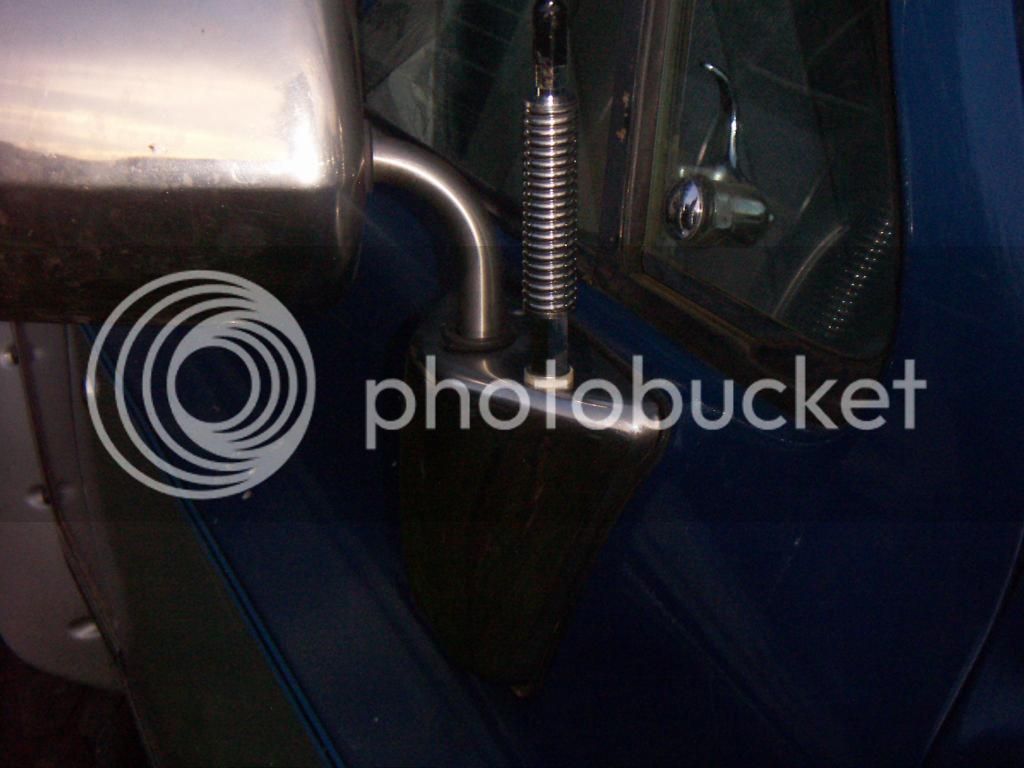