Another option which you would have to figure out mounting would be a Signal Stat style universal switch. These were used on lots of semis.

With over 2400 different parts and accessories, we have everything to make your truck go and shine. 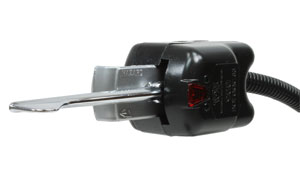 Those blinker switches run separate bulbs for brake lights and blinker lights. There is one that works like the factory switch, but I can not find it now.

I’m happy to report that the turn signal toggle switch arrived and works as advertised.

Everything worked out as I hoped: a simple relocation of the front/left, front/right, rear/left, rear/right, flasher, and brake switch wires to the toggle - specifically designed to be a turn signal - and everything works - brakes and turns. I even was able to incorporate a hazard switch.

The panel was cut from an extra piece of aluminum sheet I had, and is located in the lower driver AC vent hole, which had really poor output anyways.

I forgot to get pictures of the back side of the panel to show how everything was wired up, I’ll try to get a couple shots later this week.

Time to get back to the roof rack.

Thanks again to everyone for your feedback and guidance. Had this not worked out this way, I’d be putting the factory switch back in for sure.

I got the two main tubes for the roof rack bent. This is as close to a full coverage rack as I’ll be getting. These will tie into the rear roof/latch bar and stop just behind the cab lights. Dimensions are roughly 4x10. The main tubes bend at 90* in front to tie together, and each have a 30* bend downward to tie into the rear roof bar, since that bar sits super close to the roof which dips quite a bit in the rear. There will be 3 lateral support tubes in the middle. I’ll save the notching and cutting and tacking for tomorrow.

Pictures of the tubes resting on the 2x4 in front show what I’m aiming for as far as height: relatively close to the roof.


thinking about your rack build…how much weight do those rain gutter mounted racks hold?

fordmas said:
thinking about your rack build…how much weight do those rain gutter mounted racks hold?
Click to expand...

Not one clue. Personally, I don’t really trust the rain gutters for that usage. Im much more comfortable with mounting directly to the roof. But this truck affords me the ability to be more of a free bird with that sort of thing.
F

How is it going to attach to the roof? What spacing?

Since my welding is garbage I’m thinking about using some T slotted extruded aluminum to make a rack. Be very modular but no clue on how custom builds like yours attach

fordmas said:
How is it going to attach to the roof? What spacing?

Since my welding is garbage I’m thinking about using some T slotted extruded aluminum to make a rack. Be very modular but no clue on how custom builds like yours attach
Click to expand...

I’ll be drilling holes and stabbing rivenuts in and bolting it directly to the roof. That’s what I mean by this truck affording me the ability to be more carefree about it. I wouldn’t dream of doing that to my wife’s truck, or your truck with as clean as it is.

Forward momentum on the roof rack is commencing.

I’m really enjoying this ESAB hood @AgDieseler recommended. I’ve only laid down the tacks, but the improved vision clarity is out of this world.

As promised, here’s how I went about wiring the fan-favorite toggle turn signal:

The turn signal itself was simple. Each of the 6 wires had their own dedicated post, as indicated by the diagram provided. I even stayed true to the factory wire colors in the extensions, with exception for the purple blinker wire. Purple apparently isn’t a common color wire. So I used red instead.

What wasn’t easy was maintaining a hazard switch without reinventing the wheel. My preference was to be able to have the hazard switch operate independently of the turn signal, but that just wasn’t possible. So, to get hazards, it’s a two step process: 1) blinkers ON (in either direction) and then 2) hazards ON. The taillight wires, activated by the turn signal, provide power to the hazard switch, which when activated provides power to the front signals, and all four blink when both switches are on. It’s not perfect, but it’s better than nothing, which is what I had before with a broken factory hazard switch.


Originally I was using a DPDT switch for the hazard, which I kinda liked because it had both switches pointing the same direction when OFF, but, I didn’t like the idea of an empty position, so I swapped to a DPST switch.

I also finished welding the main structure for the roof rack today. I’m learning to work with what I have and work within my limitations. Meaning, I don’t have a fixture table, so to keep the tube from warping, I have everything pictured ratchet strapped together: tube frame, expanded metal, plywood, and saw horses. It stays like this until the metal cools, and it’s keeping everything straight.

I also am just no good at welding a continuous bead around tube. I just can’t do it. So I weld each joint in four segments: from top center down to side center on one side, same on the other side, then flip the whole rack over and repeat. I also welded the joints in the same pattern as we would mount a tire, focusing on opposing joints so that the heat is spread out.

Tomorrow it will be time to start prepping the expanded metal.

It’s Halloween weekend so that means progress on the roof rack has halted for the family. I did, however, whip together this “kick stand” for the tire rack. This will only be used when the rack is down for long periods of time and we want the tire to be level, such as during Trunk of Treats at our church. The kickstand is stored in the back of the truck when not in use.

Now you just need to build a snazzy fold out overland table for the backside of your tire for when it's flat like that.

I was think of some charcoal in the wheel and a grate on top for BBQing.

Truckman4life said:
Now you just need to build a snazzy fold out overland table for the backside of your tire for when it's flat like that.
Click to expand...

I probably wouldn’t call my vision of this snazzy, but I was thinking of a wood top, either plywood or slats glued together, cut in a 40” circle to set on top the tire when folded down.


ktmoutfront said:
I was think of some charcoal in the wheel and a grate on top for BBQing.

Seems like that would be bad for the tire

But I am working on convincing my wife to let it be the holder for the candy bowl instead of our original plan.
F

I’m just looking at the angles here and I think a table resting on the bumper and tire looks right. And a grill at the end. Full of bbq. Scientifically it just seems to line up right.

@fordmas is right. Turns out the tire lines up perfectly with the bumper. I didn’t even intend to do that. Counting blessings.

Practice setup for trunk of treats at church tonight:

I wonder what my neighbors think of me sometimes …

I should've stayed up there

If they aren't wondering, then they know too much...

Work on the roof rack continues. Notched the ends and test fit for gauging the height. Nice and low and ends just behind the cab lights like I intended.

Every project is a teacher, and something I noticed - after the fact - is that I placed too much pressure on the ratchet straps when I welded the lateral supports in, resulting in wavy outer tubes. Hazards of working with thinner material I guess. I’m not crying though, you can’t really tell unless you’re intentionally looking down the tubes. Most people won’t be.

I don't see the waviness in any of the pictures you posted.

mrk5 said:
I don't see the waviness in any of the pictures you posted.
Click to expand...

It’s there, just have to get a photo with the right perspective. It’s probably one of those things that only I’ll notice.