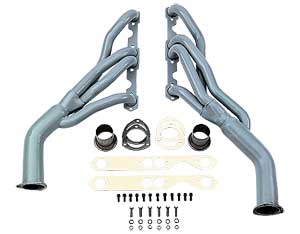 From everything I have ever heard about headers, cheap headers suck. I know a friend who had Flowtechs and he hated them. Blew out collectors every 3 months or less.

I bought a set of flowtechs used for my truck and then found out about them. I am still running stock manifolds if you get my drift.

I got a set of the flowtech afterburners, i like them i do have problems with the collector gaskets but the people that did my exhaust did not set the flanges correctly so the one side i had to double up the gasket, havnt had any problems since.
L

i've been running them since early last summer and have had no problems with them as of yet. {knock on wood} i actually just took them off to spray some ceramic hi temp paint on them, to combat the rust from the New England winter. No complaints for the price i paid.

Got them in Ceramic...'bout 5yrs or so...changed a gasket about 2 yrs ago...never have changed a collector gasket...ceramic is holdin' up pretty ok and I do drive gravel quite a bit...no complaints for the price...worst luck I ever had was with Hedmans...wouldn't waste money on those again...I like Hookers also, just a little more cash...I bought the Flowtechs after reading an article in Peterson's where they said some pretty good stuff about them as far as getting to plugs, fitment, etc....I'd buy 'em again....the next step up I would consider would be the Hooker Pro Comps w/ Jet Hot Ceramic coating....Ask 20 people and you'll prolly get 20 different opinions....buy what you can afford, I seriously doubt you can tell the diference in the seat of your pants... /forums/images/graemlins/waytogo.gif
A

Those are the same ones I have...that gray coating has a disclaimer that it's only to prevent rust during shipping. NOT fun to remove, and mine are rusting following my autozone header-paint job.
Gonna cut the flanges inbetween the tubes this week and put in some exh manifold gaskets. Maybe it'll hold this time. /forums/images/graemlins/whistling.gif

I've had mine on the Suburban for a few years now and the only problems I've had were with the collector gaskets and the manifold flange bolts. Replaced the collector gaskets with soft aluminium and the have held up for a year and a half so far (almost 60k miles). The manifold flange bolts didn't line up "perfect" so I had to hog one out on the passenger side. Trimming the webbing between the ports would likely correct the problem as well. /forums/images/graemlins/hack.gif I'm going to trim them anyway when I freshen everything up this summer.

The grey paint they put on them was gone as soon as I got my cam broken in (about 20 minutes) and now they look like rusty headers /forums/images/graemlins/rotfl.gif but they work fine.

My nephew recommended them and told me that the single pipe exiting into the collector would soften the sound a little. It does sound better than it did with the POS Hedmans that the PO had on there ... but I also replaced all the pipes and rebuilt the engine.

I think I paid about the same price for mine from JEGS.

Best set of cheapie headers I ever bought. /forums/images/graemlins/thumb.gif Next time I'm springing the extra cash for the ceramic coating.
C

mine have worked fine for 4 years now.rusty as all hell but they work.i didnt use the collector or manifold gaskets they gave with the headers.they would have blew out in a couple of miles.i use rol high performance gaskets at the collector and the head and havnt had to change thm since i put them on.
You must log in or register to reply here.
Share:
Facebook Twitter Reddit Pinterest Tumblr WhatsApp Email Share Link
Menu
Log in
Register
Install the app
Top Bottom