I joined the first gen club today, picked up this 70 Jimmy. I have been looking for an early K5 for awhile, usually when they pop up....they go quick. This one showed up on facebook and a friend tagged me in it. He was looking to trade for a Camaro or G body. I originaly was going to trade him my 88 Iroc (which I've been doing a complete restoration on for the last 10 or so years), but after thinking about it...I had too much into that and couldn't let it go. I mentioned that I had a 76 K5 that I would be willing to part with (with some cash on his end) if he was interested.

He came out and looked at my Blazer and like it. I went over and checked his out. It's rough and definetly a project. But all the pieces are there and it is about as stock as can be...right down to the drum brakes and points. The things that aren't stock are period correct, like the 16.5 6 lug wheels.

We swapped, I ended up with a decent amount of cash. Without giving out the actual number, but it was more than enough to cover what I had into the D60 and Nv4500 swap. I got quite a few patch panels with it, but I'll still need more and probably have to fab some up too. I did get a good section of firewall/floor from a donor truck to fix the lower "4 hole" area on the passenger side as well.

It's a one owner (I guess technicaly two if you count the guy I got it from....but he didn't do a single thing to it, never even started it) 1970 GMC Jimmy. 350/465/Dana 20. Original owner only bought it to plow his driveway. Odometer says 47,xxx....jury is still out if that has been rolled over once before. Guy I got it from says he's know the owner all his life and always remembers it being only a plow truck. He seems to think it is a factory plow (I don't believe that was even an option). To me it looks like a dealer add on or early 70's aftermarket. I didn't get a blade for it (nor do I want one), but all the hydraulics/controlls are there and move freely....don't see any reason why it wouldn't still work. The original owner pulled the starter off to get it rebuilt and never got it back on before he passed away. The motor spins over by turning the fan and the oil/coolant look great, I will try to get it running before I pull it.

Quick run-down of my plans. Try getting it running (even if I don't plan on using this motor). I will put the passenger side door back on to square up the tub before I brace it and pull it off. Go over the frame (brake/fuel lines, suspension, etc). Then drop the body back on and start tackling that. One piece at a time, keeping it drivable in the process. In the end I want a nice driver, nothing show quality. Something I can hop in on nice days and go for a cruise and hit some very mild trails with the wife. That's what I didn't like about my 76, was too much of a handfull on the street. I'll go into more detail once I start a build thread, but don't be expecting a complete factory correct restoration.

Some quick pictures before I unloaded it. Will get some more of the truck and some of the parts I got (fenders, panels) later on. 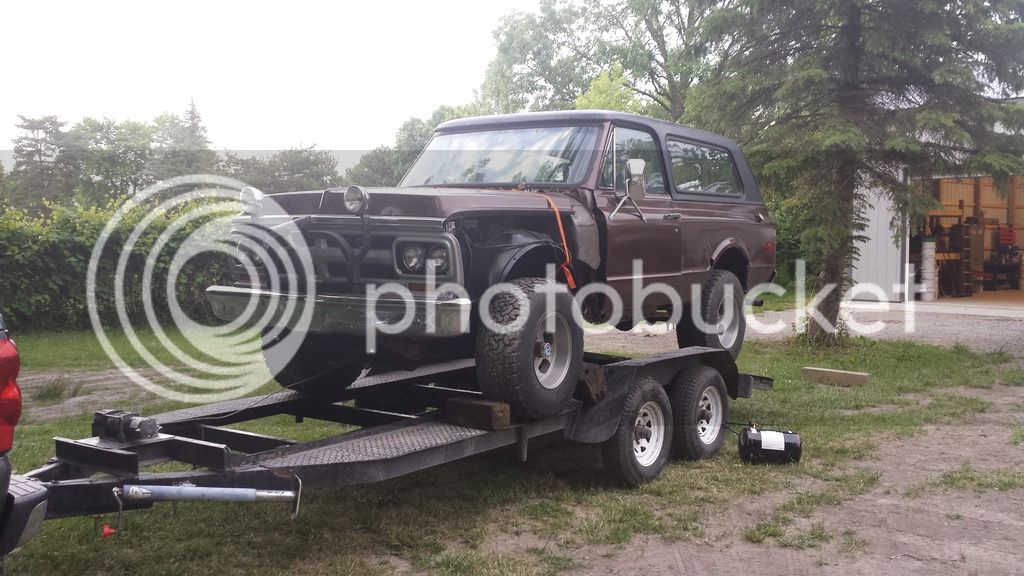 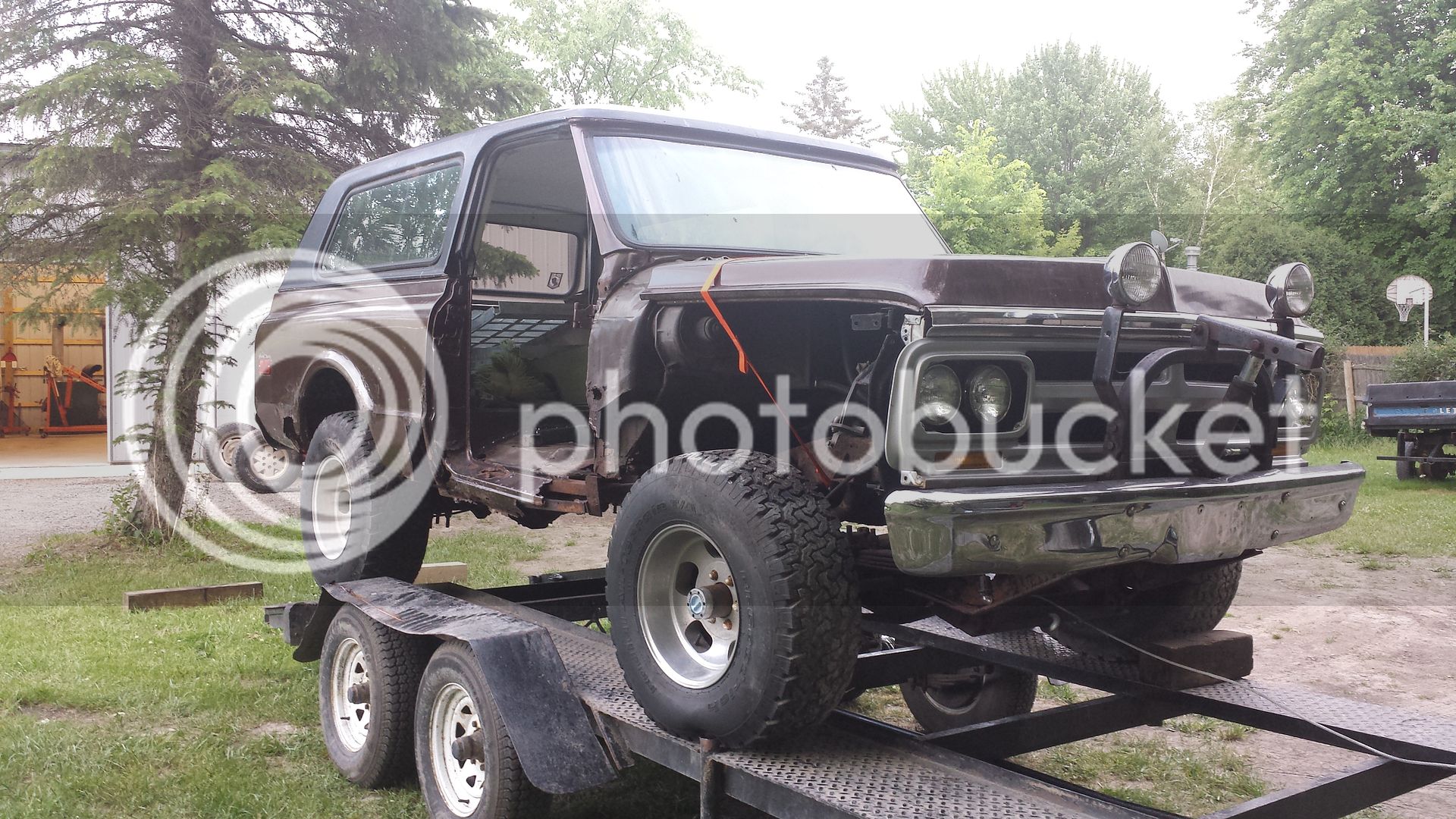 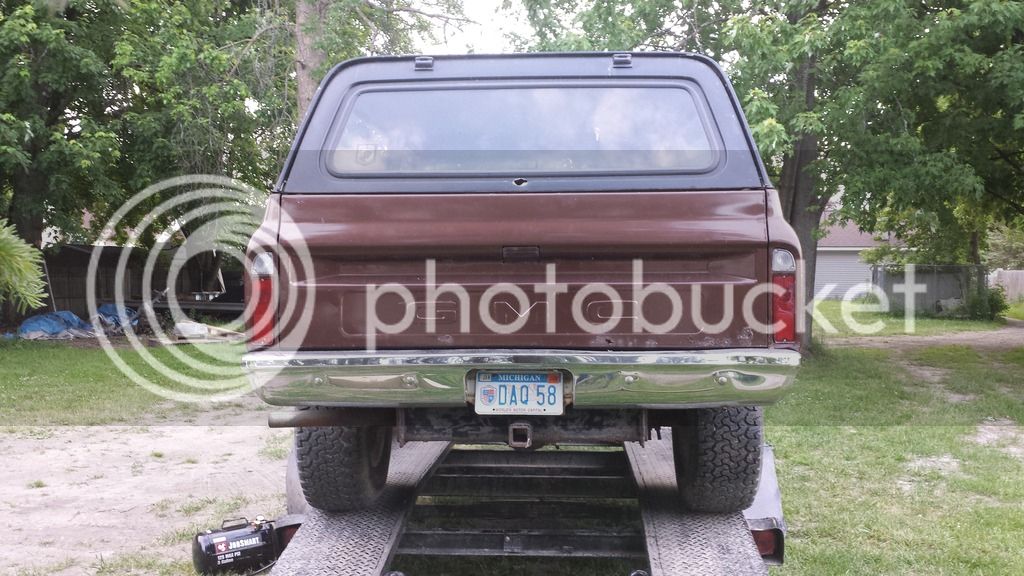 Caught my cousin in this picture. 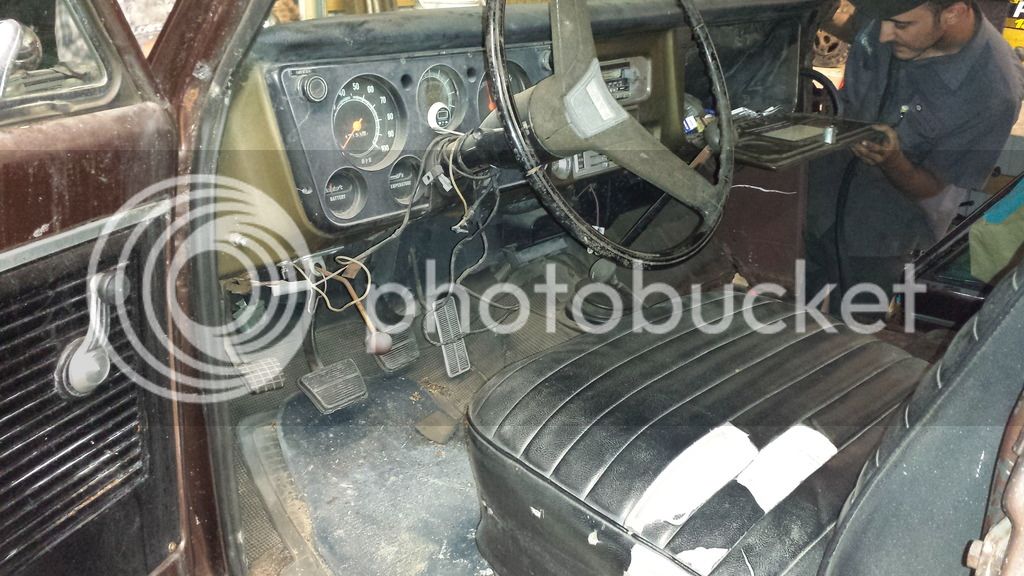 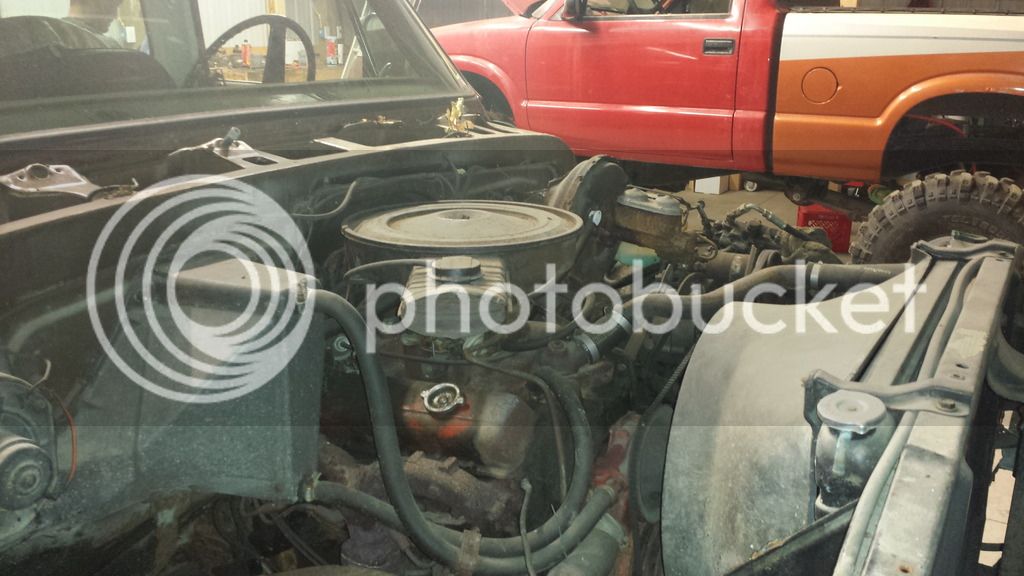 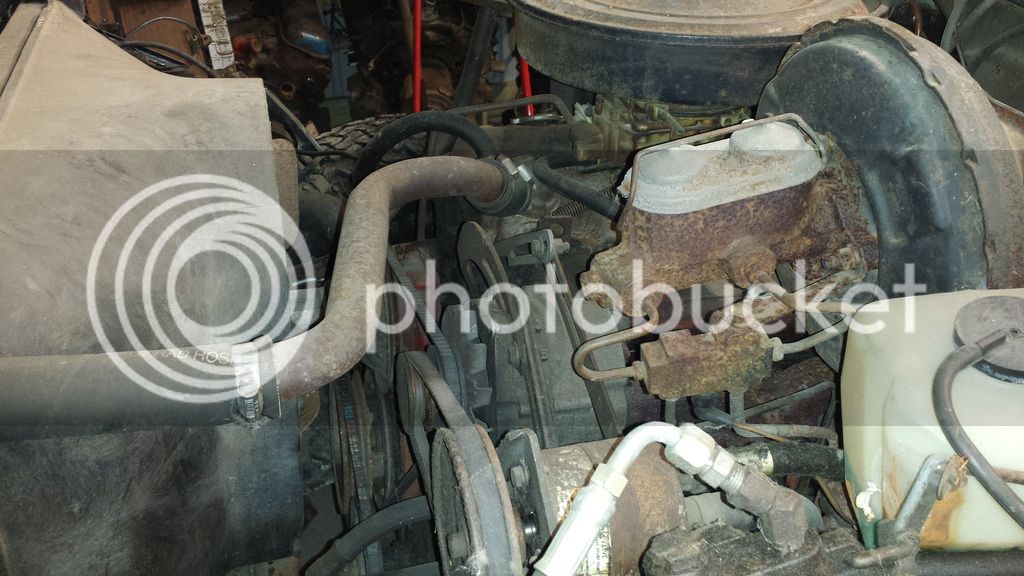 Looks to be in pretty good shape considering it was a plow truck.

sreidmx said:
Looks to be in pretty good shape considering it was a plow truck.
Click to expand...

Don't let the pictures fool you. It's going to need floors, rockers, rocker boxes, quarter work (if not the entire quarter on both sides). The front sheet metal is in very good shape. Drivers fender is almost perfect, passenger side has some minor rust starting. Hood is in great shape too.
R

Got it running tonight. Put a starter in it, had to jump the wires for the "R" terminal right to the battery because I didn't have one with it. Stuck a line from the fuel pump into a gas can. Gave it a quick shot of starting fluid and it fired right up. Had to do that a few times before the carb filled up. Once it was filled, it idled perfectly and seemed to have decent throttle response. Played with the accesories while it was running, all the lights work (even the plow lights!), heater works and has hot air, gauges/dash lights work, plow controls work, radio works, idiot light for the brakes works (comes on when you press the pedal because it goes right to the floor). Overall I'm very happy with it, wasn't planning on using this motor....but I just may after seeing how well it runs.

Did get a quick pic of the fenders before getting cought up in getting it running. Drivers side is almost perfect, passenger side has a tiny bit of surface rust going. 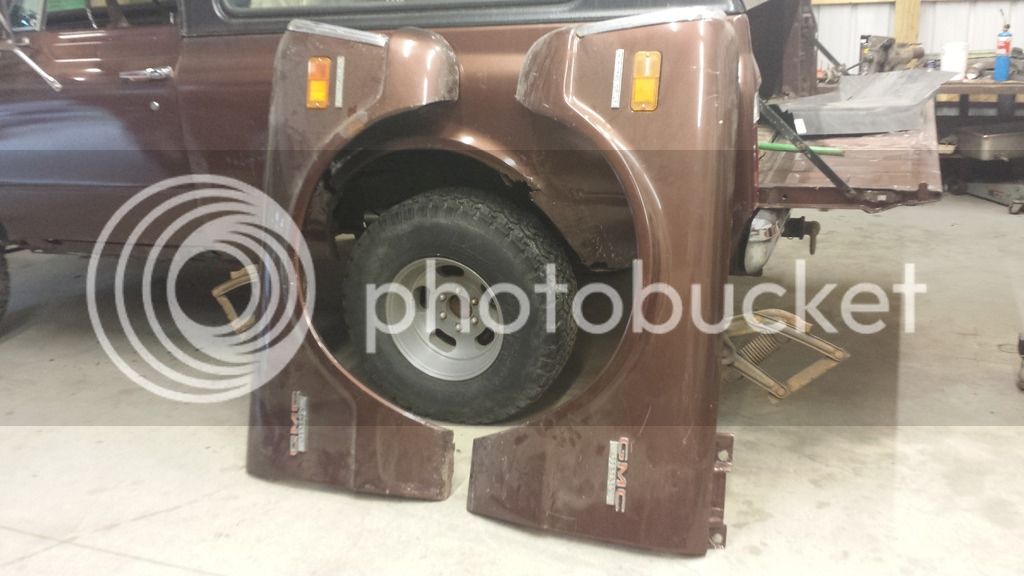 Thanks! Been looking for one for a long time. Even though it needs a lot of work....I think I'll be happy with it.

Guy I got it from said he had someone offer $500 for the wheels. I thought they were just 15's. After looking at them they are actually 16.5's. I like them, but tire choices are getting limited.

Rusty1970 said:
Looks like a great start to a sweet ride I have a 70 gmc 4wd short bed it has been a great truck and now my family has out grown it and so I am trying to get into a 67-72 blazer or jimmy
Click to expand...

I'd like be able to take the wife out in this one. Need to track down some more seats first though.


Before I get to carried away tearing into...I'll start a new thread in the Driveway.
Last edited: Jun 14, 2016

You may find that original engine to be a good one well worth "using up"..its probably a 4 bolt main 350,and 1970 had the highest compression ratio,after that they reduced them year by year to meet emissions..I've owned several 1970's vintage 4 bolt small blocks and all of them ran strong and long for me..

Its kind of strange how the noses on '67-72 trucks even up here,dont seem to rot much,while the rest of the truck crumbles away fairly rapidly and extensively..all the trucks those years I had all had very good sheet metal from the doors forward...not so in the rear or the floors though,and that was 20+ years ago...hard finding any worth patching up around here any more for a reasonable price..

Nice truck I would love to have one of the early blazers.

Nice so the white k5 is gone now?

diesel4me said:
You may find that original engine to be a good one well worth "using up"..its probably a 4 bolt main 350,and 1970 had the highest compression ratio,after that they reduced them year by year to meet emissions..I've owned several 1970's vintage 4 bolt small blocks and all of them ran strong and long for me..

Its kind of strange how the noses on '67-72 trucks even up here,dont seem to rot much,while the rest of the truck crumbles away fairly rapidly and extensively..all the trucks those years I had all had very good sheet metal from the doors forward...not so in the rear or the floors though,and that was 20+ years ago...hard finding any worth patching up around here any more for a reasonable price..
Click to expand...

I'm really surprised at how well it fired up and ran, of course I haven't put a load on it yet or tried driving it, but I think I'll end up using this motor after going through it.

Truckman4life said:
Nice truck I would love to have one of the early blazers.
Click to expand...

Thanks, been looking a long time for one

jekquistk5 said:
Nice so the white k5 is gone now?
Click to expand...

Yes the white one is gone. I have a feeling I might see it pop up for sale soon though. I kept a few things off of it and he didn't get my Boggers...only a set of roller tires. I ended up with a decent amount of cash from the deal too. I thought at first I would regret getting rid of it...but so far I couldn't be happier. I honestly think the guy doesn't know what he actually got (D60/14B, Nv4500, crossover, etc). I was running down the list of the modifications and he kept getting hung up on the stupid stuff, like how well can you hear the radio or does it cruise down the highway.

motorcityk5.com has a full 1 piece floor pans for the 1st gets for cheap. I believe it has the floor supports attached too.

They sell them with or without the floor braces.

They sell them with or without the floor braces.

That is actually a very good price on the floors with boxes. Probably the route I will go...thanks for the link.

No problem man, I was searching for floor pans for my '78 a few weeks ago and saw a 1 piece pan and got all excited... then I saw it was for 1st gens.

Seems like a really good deal to me. It'll probably need some persuasion like all panels but I figure it couldnt be too horrible.

Out of curiosity what's the plan on the tranny/t-case?

big dan said:
Out of curiosity what's the plan on the tranny/t-case?
Click to expand...

I'm not exactly sure yet. They seem to shift through the gears fine, and the 465 stick still feels tight....not all loose and having to guess what gear you might hit.

I've got an Nv3500/208 stashed away, and being that I want a nice driver..... But, it's not exactly a common GM combination, so I think it's cool in that aspect. However, I'd guess 99% of the (normal) people out there could care less about that or even know what a Dana20 is.

I've seen three Dana 20's in GM trucks--two in 1969 and 1970 K5's with a straight six and a 307 V8 with three speed manuals,and one in a 1968 Chevy K-10 ,also a 3 speed straight six..all three had a weird transfer case adapter with the shifter mechanism incorperated into it..
They must be rare because I've seen at least a hundred of all the other types of transfer cases GM used ..
You must log in or register to reply here.
Share:
Facebook Twitter Reddit Pinterest Tumblr WhatsApp Email Share Link
Menu
Log in
Register
Install the app
Top Bottom