Have a question about homemade dipole antenna

There seems to be some serious knowledge her on CK5 re: amateur radio and I was hoping someone could help me out with a homebrew dipole antenna installation.

I have a hunting cabin in Northern Ca, and recently decided to set up a cb base station there mainly so I can communicate to the cabin from my hunting rigs from (almost) anywhere on the ranch. I have a CB already installed in my Samurai, and this weekend I tried to install a homebrew dipole on the cabin. After getting it installed, I had an SWR of 3:1 on both channels 1 and 40. Here's a photo of the antenna setup where the coax connects: 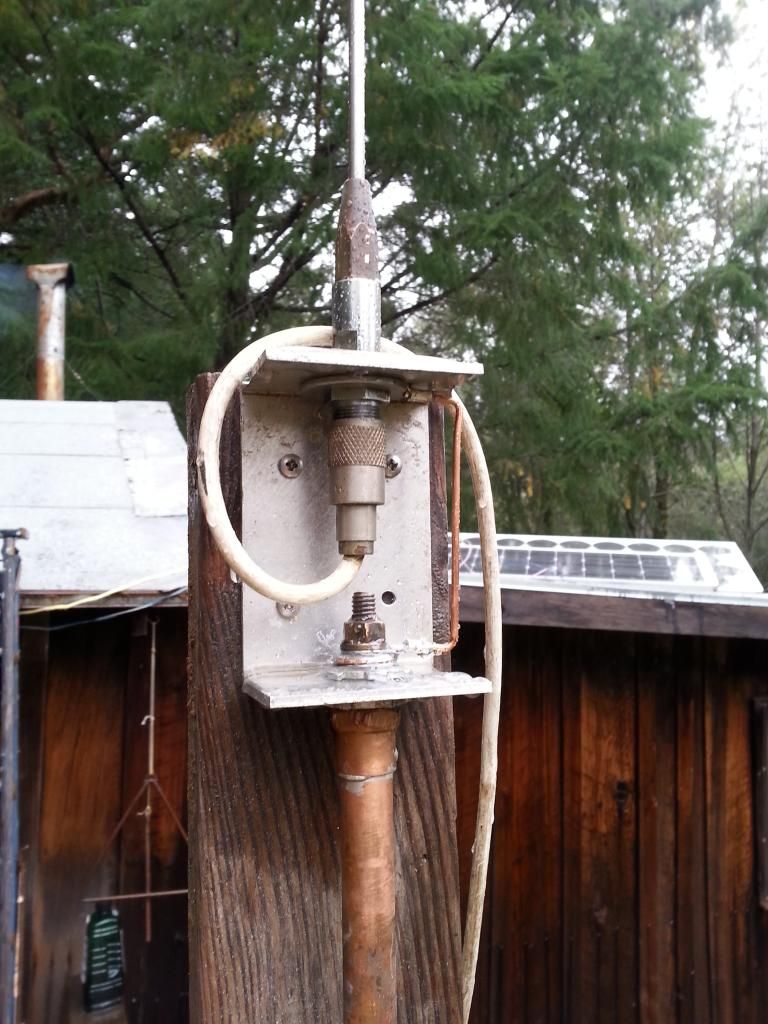 I'm hoping it's pretty self explanatory, but here's how I made it- I used a piece of aluminum channel and mounted a 102" stainless whip to the top using a PL259 antenna connector. For the counterpoise I used a piece of 1/2" copper tubing, 102" long, and it is secured to a threaded hole in the channel with lock nuts on either side to make good contact with the aluminum channel. Then, for good measure, I created a jumper from the PL259 connector shield to the copper pipe via a solid copper wire and a copper bolt I soldered into the end of the MIP-tubing adapter. I used anti-oxidant conductive grease on all the connections, making sure not to create a short between the ground and center conductor of the coax. Then there's about 22' of RG8x running to the cabin where I was attempting to use an old Cobra 29Plus as a base station.

At the cabin, there is extremely limited cell access, and therefore, no internet access, so on site troubleshooting was out. However after some reading and research today I think I have some potential issues, and it would be great if anyone who knows about these things could pitch in their 2 cents.

My antenna is mounted on a post that stands about 7' off of the deck of the cabin, and therefore, my radio is mounted only about 3' vertically below the center connection of the antenna. Do I need to get the entire antenna up higher than the radio to get a better swr?

The cabin is built on a steep hillside, and where the antenna is right now, it's on the downhill side of the cabin and is at a higher elevation than 80% of the rest of the ranch. Rx is good, I took a ride in my Samurai, and called out different landmarks around the ranch as I got to them and my wife could read me loud and clear out to about 3.5 miles, which is as far as I went. However, due to the 3:1 swr and the fact that for some reason the Cobra 19plus would not transmit any sound, we couldn't do real-time radio checks. She just wrote down the landmarks as she heard them so I could see how far she could hear me.

Before I go over to an amateur radio forum to try and get my issues resolved I thought I'd try here. I'm no radio tech and some of what I read over on those sites goes right over my head.

I'm not a techie really,but have played around with CB's for years back in the day..

First off,a 3:1 SWR ratio is rather high,and the borderline as far as risking damage to the output transistors..you should be able to "tune" the antenna to get it down to 2:1 or less....on a typical CB antenna you'd lengthen or shorten the mast to adjust it..you can buy a "matcher" that lets you dial in the lowest SWR,but they are a comprimise and some say they dont really work,they just keep the output transistors from frying..

What your doing here is substituting the copper pipe for a "real" ground or counterpoise...you may have better results just grounding it to an earth ground..burying copper wire in a "fan" pattern in the ground works good,if you have a well or pond nearby,you can also solder the ground to a copper plate and drop it in the water...

Also a dipole antenna is somewhat directional,and if mounted horizontally .you may get better results,but will also have to be able to "turn" it in the proper direction for best reception and transmitting..

If you could find an old "beam" antenna like a Moonraker ,that would be the ideal setup,you'll need a way to rotate it too though,because they are very directional...

I had an Antron 99 fiberglass antenna that was 18 feet tall and needed no "ground" ,and it did quite well,I could talk about 20 miles on it and it was not very "directional"...sadly its been destroyed after several high wind events and a few hurricanes...

The higher up the antenna is the better-to a point--too high will make it hard to service and the longer cable can induce a lot of signal loss--RG-8U is much better than the thin RG-58U used in car applications as far as lower signal losses..

CB dipole length should be ~108". The whips are 102" because you run them with a spring that makes it electrically 6" longer.

Don't mount the antenna horizontally. Antennas are polarized and a horizontal to vertical loss is like 60% if memory serves. For big power amateur stuff, that's less of a worry but with a maximum of 5 watts legally in CB, that's most of your power.

I made up a dipole for CB using stainless tube on both ends with the coax stripped out and attached to the tube with house clamps on both ends. The two tubes were two piece, one slid into the other and the outer split at the joint and clamped to hold it. I'll have to see if I have any pictures. I know the pieces are still around somewhere.

It sounds like you are off to a good start. I'm sure some of the more experienced HAM guys will tune in, but I think your coax has to travel back a half wave length from the antenna before it goes vertically or you bleed back into your outer shield of the coax.

Also, stay off amateur forums with CB questions, they are knowledgeable folks, but get testy with CB guys.