I realized that I just don't have the time to do a lot of fab work. I have the equipment and some basic ability but I just can't seem to find any down time in my schedule to do it. I sold the K5 back in January and decided to focus on my Xterra and shoot for a moderately capable wheeler and something comfortable to do some traveling and camping in. "Overlanding" if you will.

It started as just a stock 07 Xterra S. Nothing fancy. 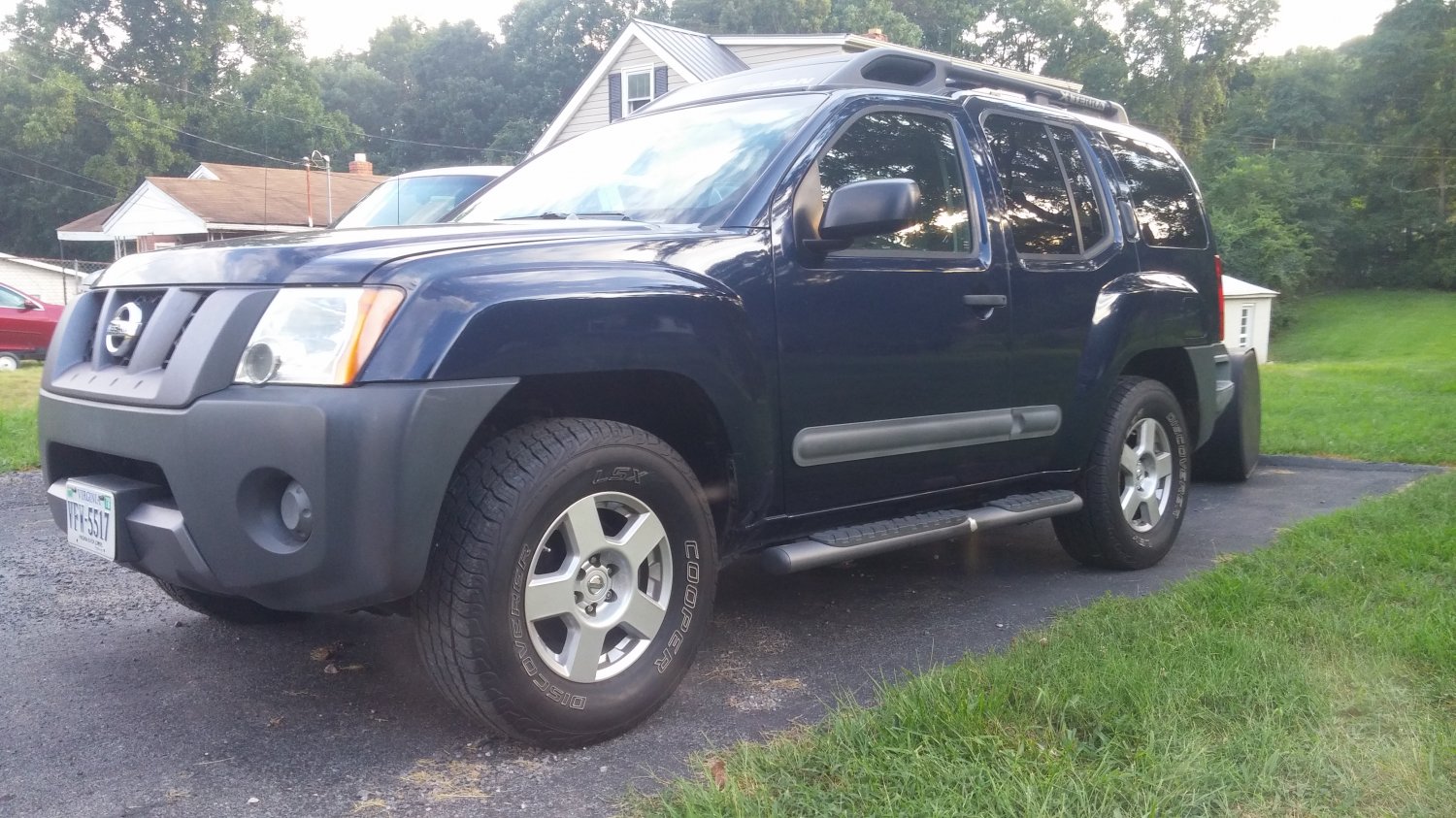 After a couple trips last year, I realized that the step tubes had to go! I ordered a set of the White Knuckle Offroad sliders for it with the 10* tube option. The flatter tube angle makes a great step for the wife and kids and really helps getting to stuff up on the roof. I also swapped headlights for the black bezel ones after they originals started fogging up on me. 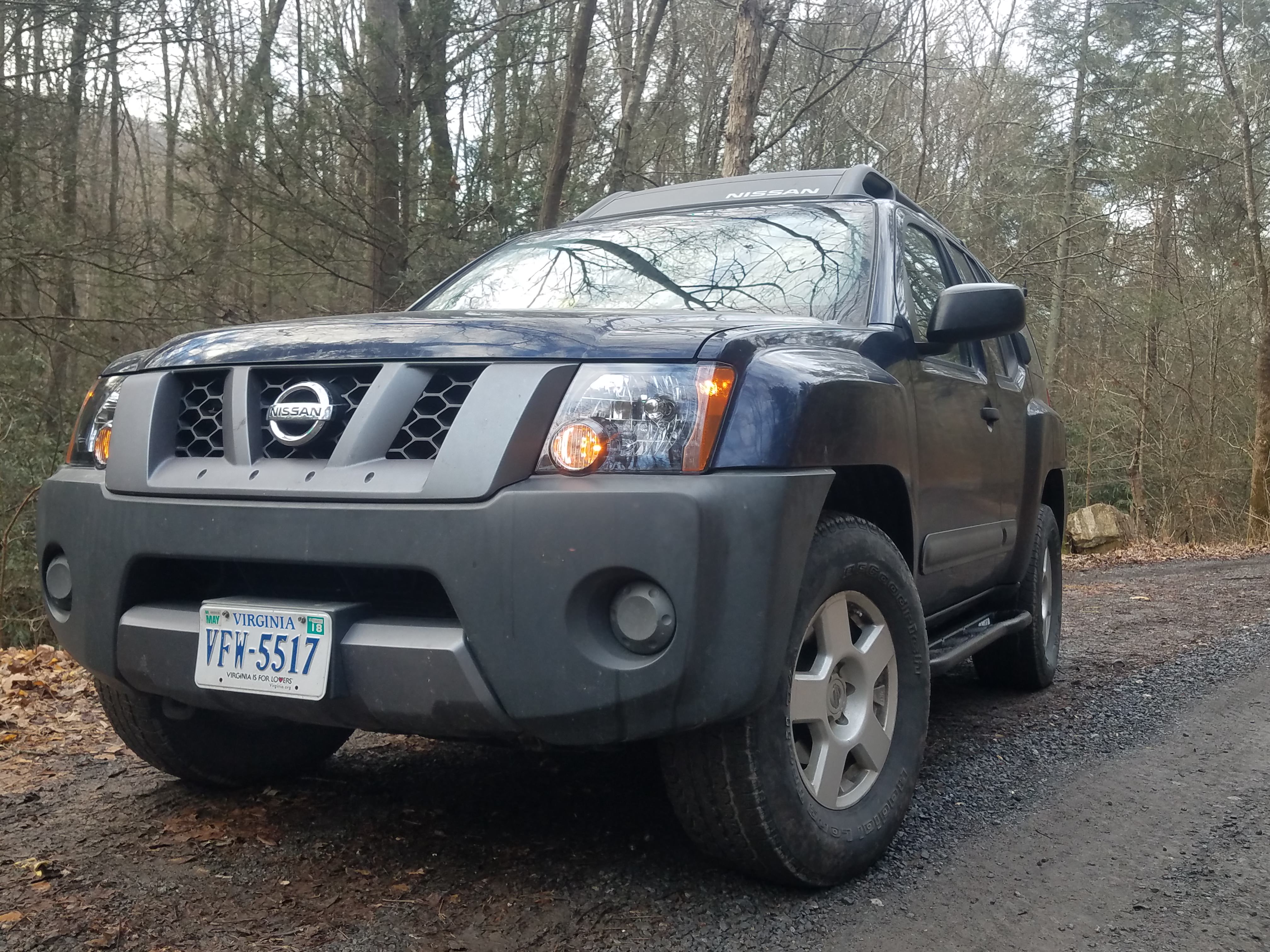 I've been slowly gathering lift parts for almost a year now. I've managed to find some pretty good deals on quality parts for it too. You can only really lift these about 3" before you start having issues with the driveline or you have to go with a drop bracket kit which I don't want to deal with.

I've still got to order the extended rear brake hoses for it.

I used some of the K5 money to order a Warn Zeon 10S winch for it and just placed an order for a Shrockworks front bumper to carry it. It should be here in June. The issue with such a niche vehicle is that the guys who make parts for them don't keep anything in stock since it's not a big seller. I'm just glad there are some companies that support these things.

I added a cheap roof basket to it to make carrying things up there easier than strapping it to the two factory cross bars. The clamps are from McMaster-Carr and the basket came from Amazon. I think I have $120 in the whole thing? At least I do a little fab work, right?

I'm considering putting a piece of 5" PVC on one side of the bars that hang out for a water tank for wash-up water around camp. I'm afraid I'm probably going to buy a set of the traction boards like the MaxTrax in the future and I'll probably use the bars on the other side to mount a bracket for them. I've never used them but I've seen them used quite a bit and I think they are honestly pretty good to have if you use them as intended. I want to take this thing out on the beach in the future and I think they'd be really useful in the sand. 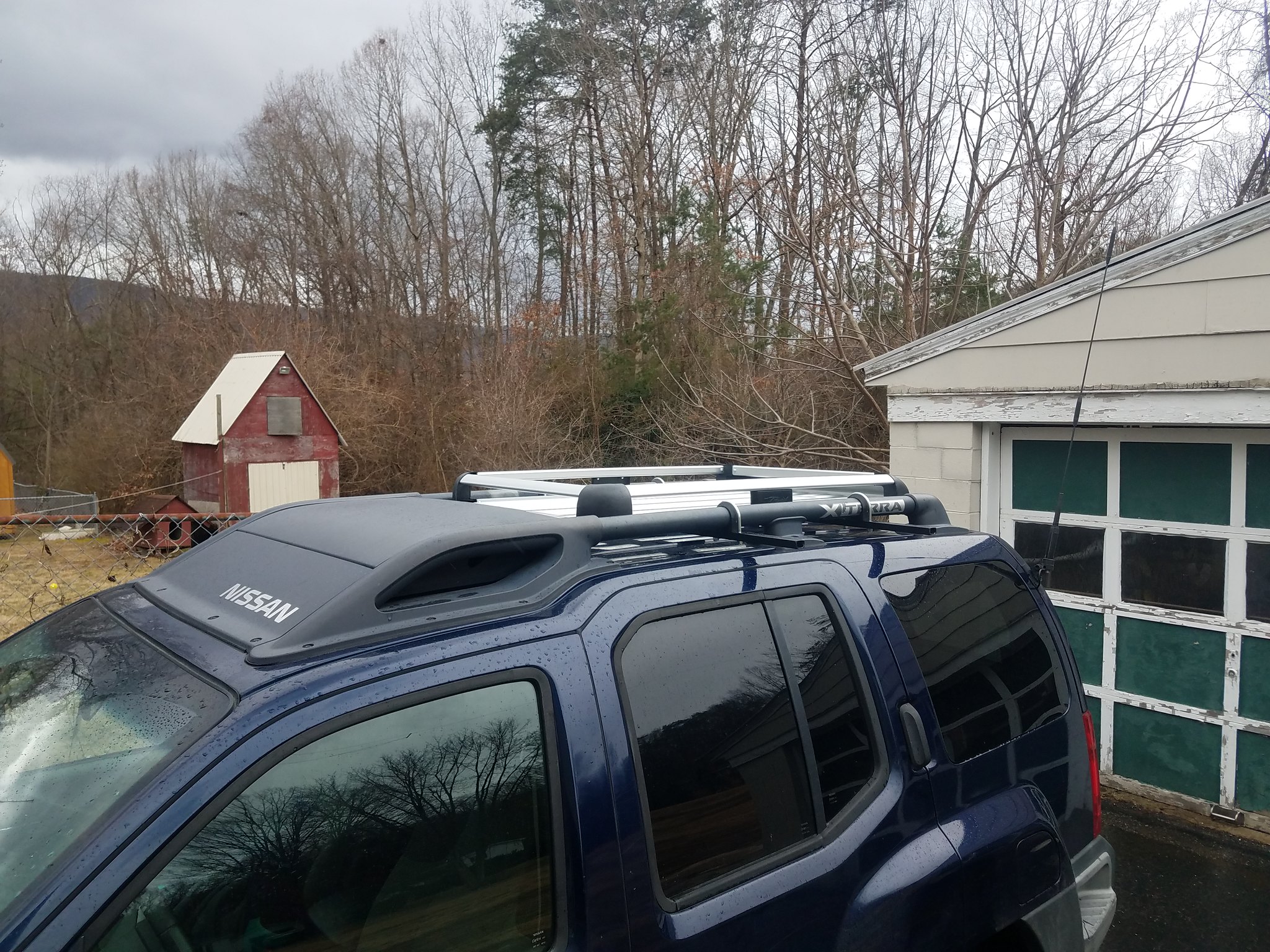 These things can fit 285/75/16 tires in factory form. You just have to heat a little section of the front inner fender liner and push it back to make room. This is refered to as the "Melt Mod". I did this last week and had my tire guy order me a set of Cooper Discoverer AT3's for it. I argued with myself over that choice of tire, but in the end, I've been running them and they are quiet on the road, have good traction everywhere I've had them, and are affordable. If I decide I need something more aggressive, my K2500 uses the same size and is in need of tires as well so I'll just move them to it and get something else for the X.

If I find that I'm pleased with them on the X, I'm going to order a second set for the K2500. I'm hoping to keep new tires on the truck and move the low mileage, couple year old tires from the K2500 to the Xterra as I wear out the tires on the Xterra since it is still currently, and for the forseeable future will be, my DD.

With a couple hitch pins, my Hi-Lift is disassembled and stashed under the back seat along with my shovel and small camp axe. I also added Raingler ceiling attic and full barrier net behind the back seat. The ceiling attic is nice to keep my umbrella, sun hat, wool blanket, extra hoodie, and my rain gear in. The barrier net keeps camping gear piled above the top of the back seat from hitting the kids in the head during hard braking. 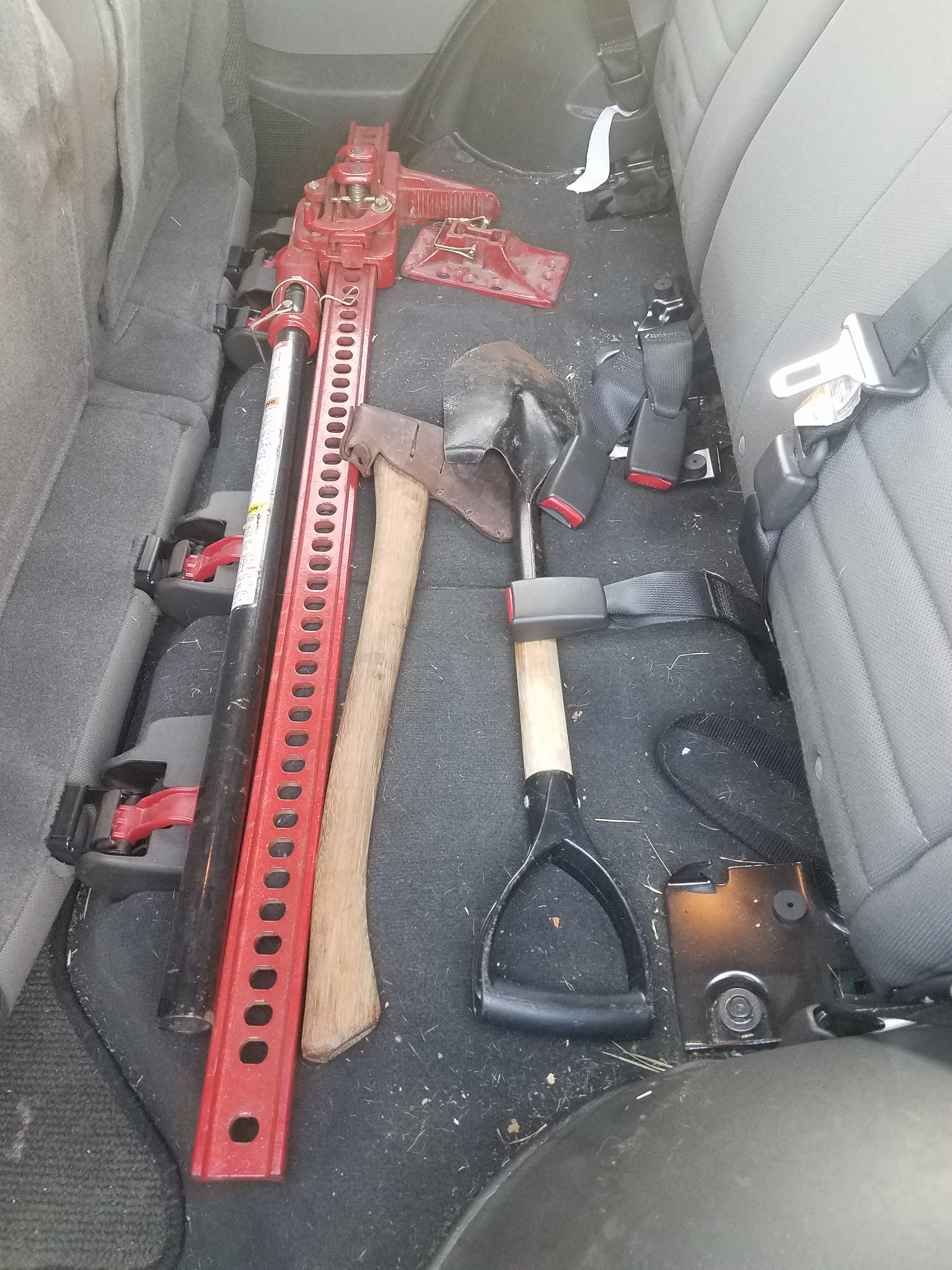 When the weather breaks and I can spend evenings wrenching a bit more, I have an ARB compressor to install under the hood for OBA as well as powering an eventual pair of ARB lockers. I also need to finish the install of my quad band Ham radio under the passenger seat. I've run the power cable but have not made up the bracket to mount the radio yet. It's on the list....
Last edited: Apr 6, 2018

Met a guy last year that manufactures parts for the Xterra and the Titan. He's in Auburn, next door to WFO IIRC. His Xterra was bad ass.

We looked at then several years ago but went with a Suburban. Now that our kids don't need so much space for things like strollers and pack-n-plays we can get by with smaller vehicles. I liked the leaf spring rear for durability and stability and the IFS because it drives better than solid axles. I drove a Wrangler last year but I don't want to daily drive something that wanders in the road like they do.


skunked said:
Met a guy last year that manufactures parts for the Xterra and the Titan. He's in Auburn, next door to WFO IIRC. His Xterra was bad ass.
Click to expand...

Remember his name? I've probably got SOMETHING from him considering the lack of companies that do.

TerryD said:
Remember his name? I've probably got SOMETHING from him considering the lack of companies that do.
Click to expand...

Yep! I have a pair of his adjustable shackles on my bench and I'm waiting on one of his u-bolt flip kits to arrive now.
S

Call me when you want some Maxtrax.... I sell a shitload of them.

swettysblazer said:
Call me when you want some Maxtrax.... I sell a shitload of them.
Click to expand...

Those things come in handy. Ive used my set a ton

Yay! I’m glad you are doing a build thread.

swettysblazer said:
Call me when you want some Maxtrax.... I sell a shitload of them.
Click to expand...

Will do! It'll probably be later this year. I'm still buying lift parts at three moment.


TreeFarm said:
Those things come in handy. Ive used my set a ton
Click to expand...

Good to hear. Since it seems I'll be solo most of the time, I want every option I can justify.

Well, I'm hoping to get to the building soon! Not this weekend, but next, I want to get the lift installed. I'm waiting on my extended brake hoses and u-bolt flip kit right now. Unless I need lower control arms, I should be set. I might start early if the weather is good that week. Spend a few hours each evening working on it.

I'm really happy with this thing. It might even live up to the legacy of my old Cherokee.

I'm still waiting on the u-bolt flip kit and Monday I ordered my extended brake hose kit. I'm REALLY hoping to get started on the lift next week and hopefully have it done by the next week. I'll try to get stated Monday since I have the whole day off.

I called last week to order my tires but I'm not sure my tire shop got them ordered. The girl at the counter asked me to call back tomorrow to see if they have them. I did call at quitting time though.

Just got back from the tire shop.

285/75/16 Cooper Discoverer A/T3 I had them remove the TPMS sensors. I don't feel like they are worth the effort right now. I may put them back in down the road but for now I'll just do without. 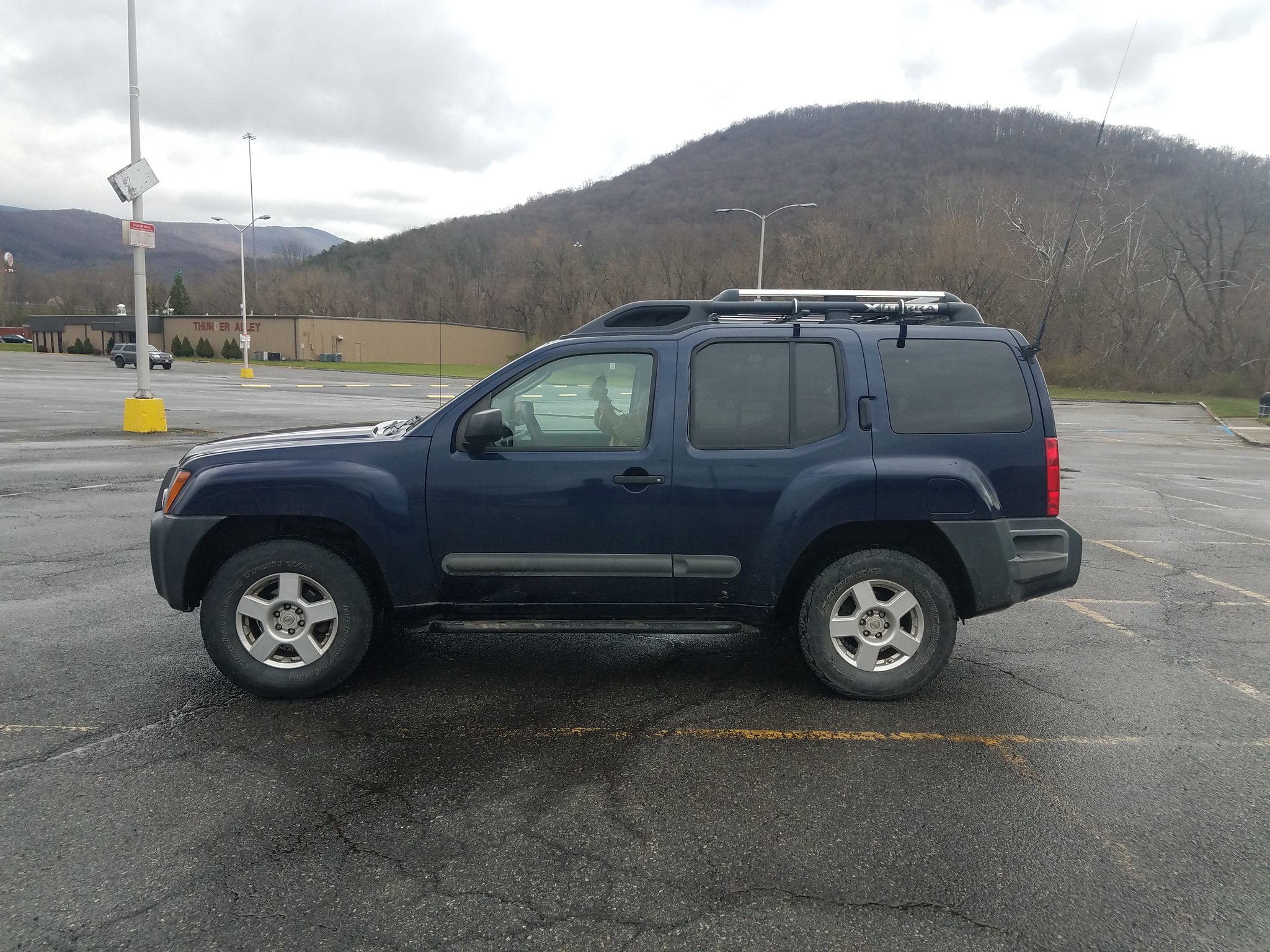 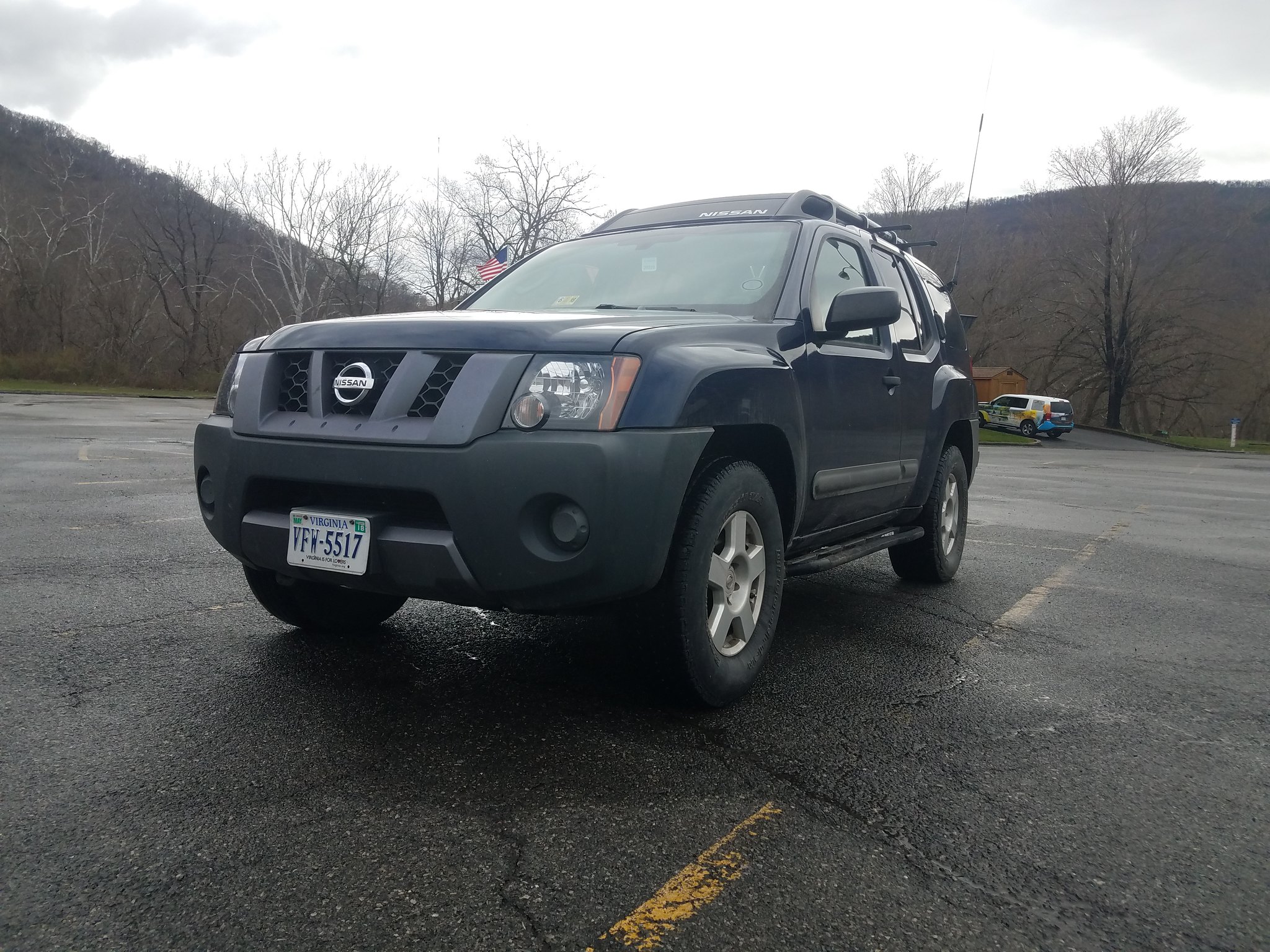 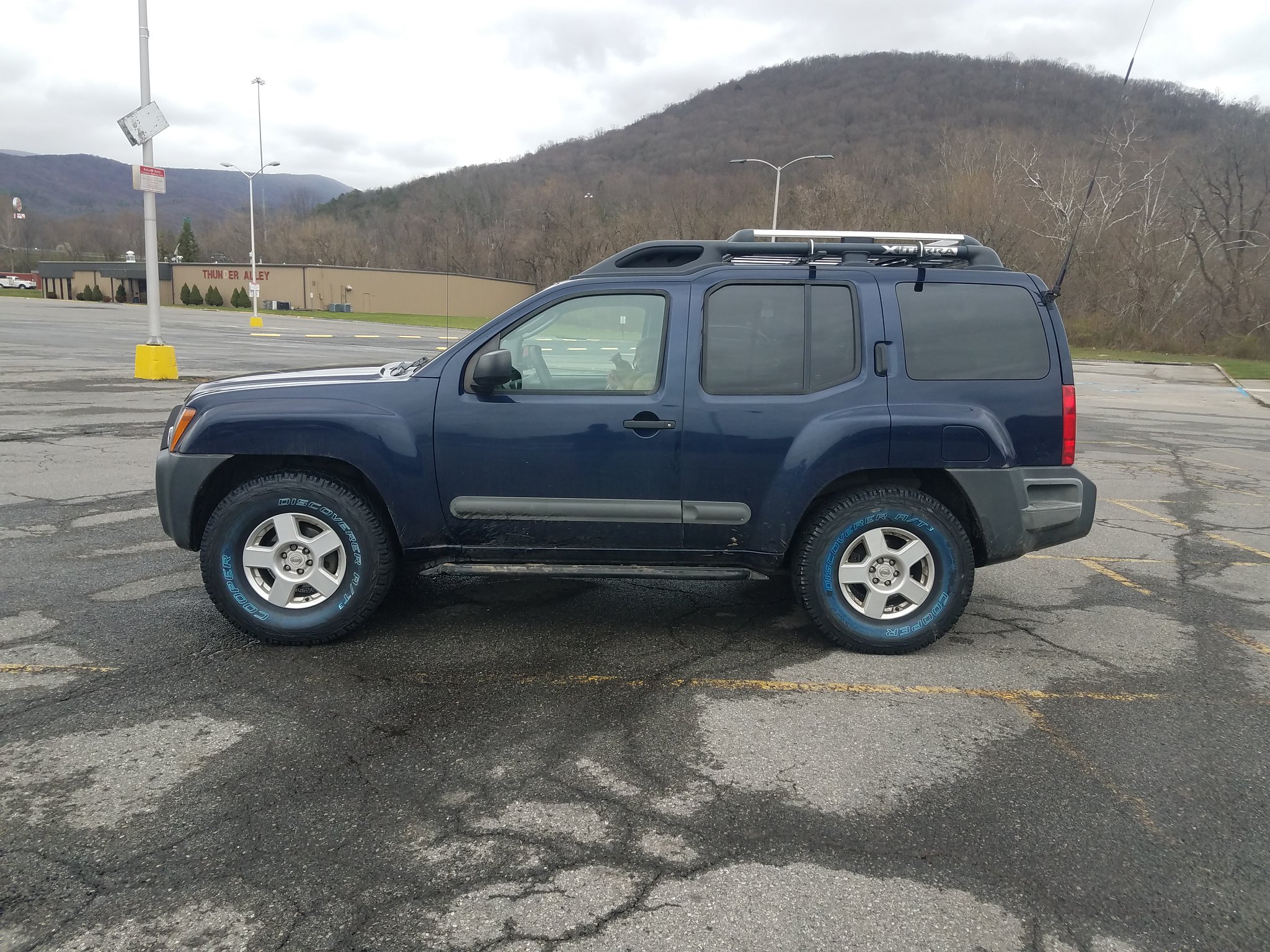 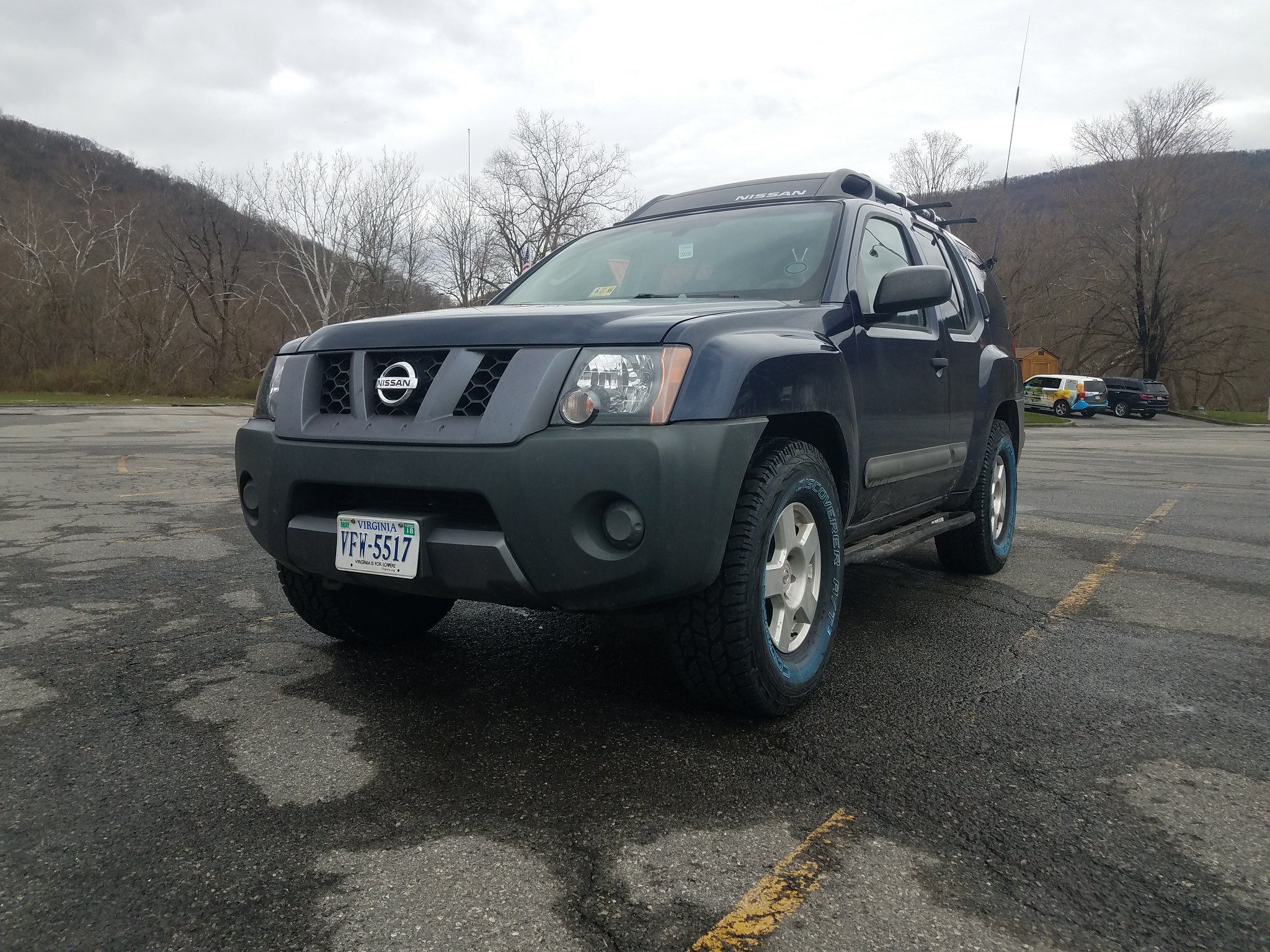 I can tell they are quite a bit heavier than the P rated 265's and I think I might focus on finding a set of 3.69 geared axles for it. It's just a quiet inside as it was so I think for the time being, I made the right choice. While it was up, I gave it a quick once over and I'm gonna need new brake pads on the front pretty soon. Guess I'll be putting in an order with Rock Auto here after while.

) and a pair of LCA's for it from Rock Auto. I figure with almost 170k on the clock, I might as well replace the LCA's since it's getting new upper ball joints and UCA's. Plus I'm a little bit worried that my passenger side LCA is bent. It wears the outside of that tire and is also the side that seems to have taken a hit at some point in time. The fender is bent up, factory bumper is busted up a little around the mounts and that head light had been replaced when I got it.

With this round of parts, I should be good for a while. When I hit 200k, I'll replace the inner and outer tie rods and steering rack mount bushings. Weather is still in the pot around here and it's supposed to snow again Saturday

. Guess the lift will be waiting a while longer.

An old buddy of mine came to visit today. He's been out of 4wds for a bit and since I had new tires I hadn't tested, we headed up the mountain to give them a go. He took a turn at the wheel and we had a great time catching up while beating our way up the trail. 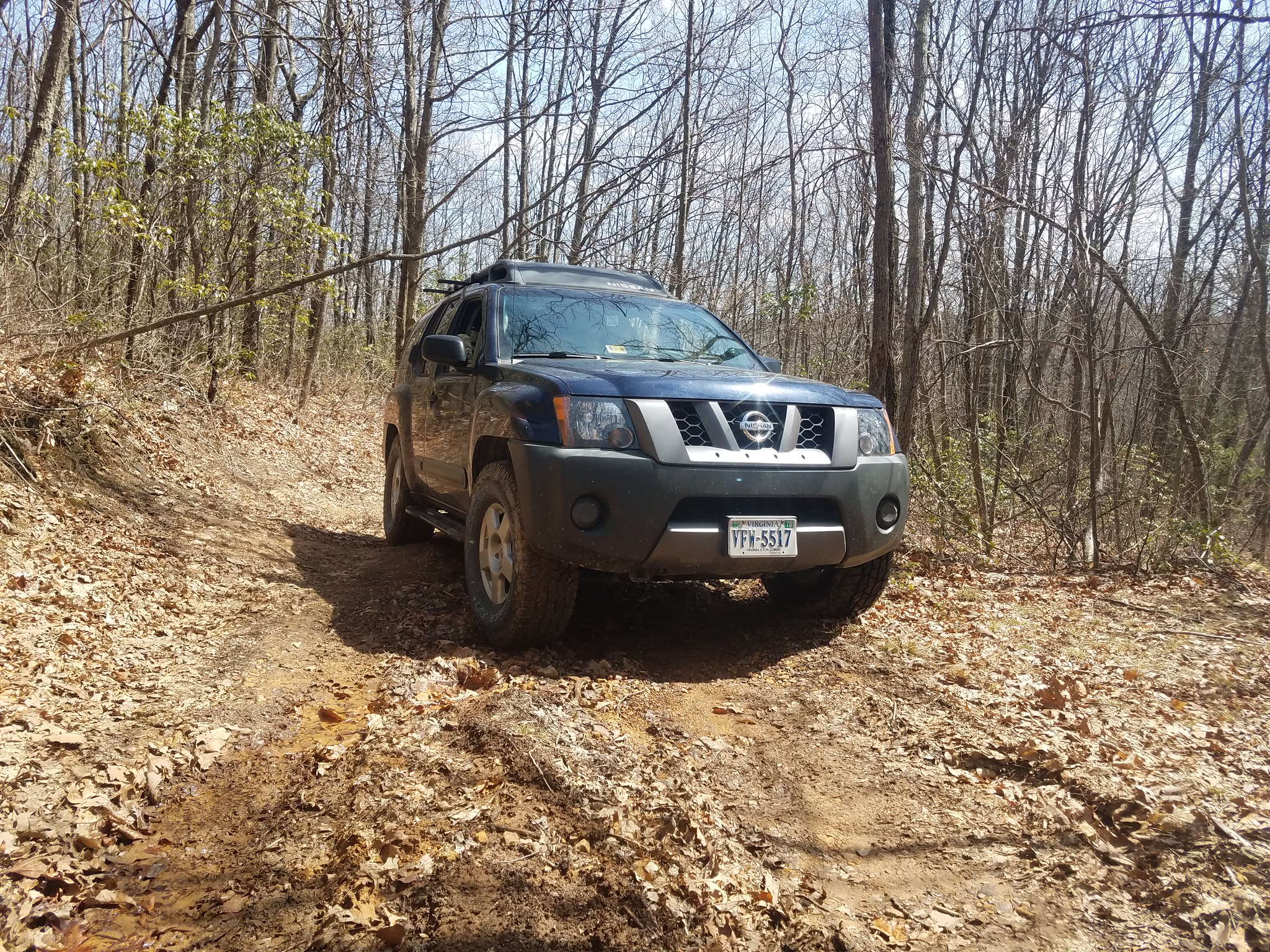 Spent some time in the garage yesterday after work getting my new leaves cleaned up a little and organizing my lift stuff. I think I'm ready to begin! Now I just have to put it up on stands and get to it!

Lift has begun!
Both Helwigs removed
Both shocks swapped
U-bolts off both sides
One Alcan in

Started around 5, worked about an hour and a half between pumping up neighborhood kids bike tires, a nice supper the wife fixed and packing everything back in the garage to close up for the night. 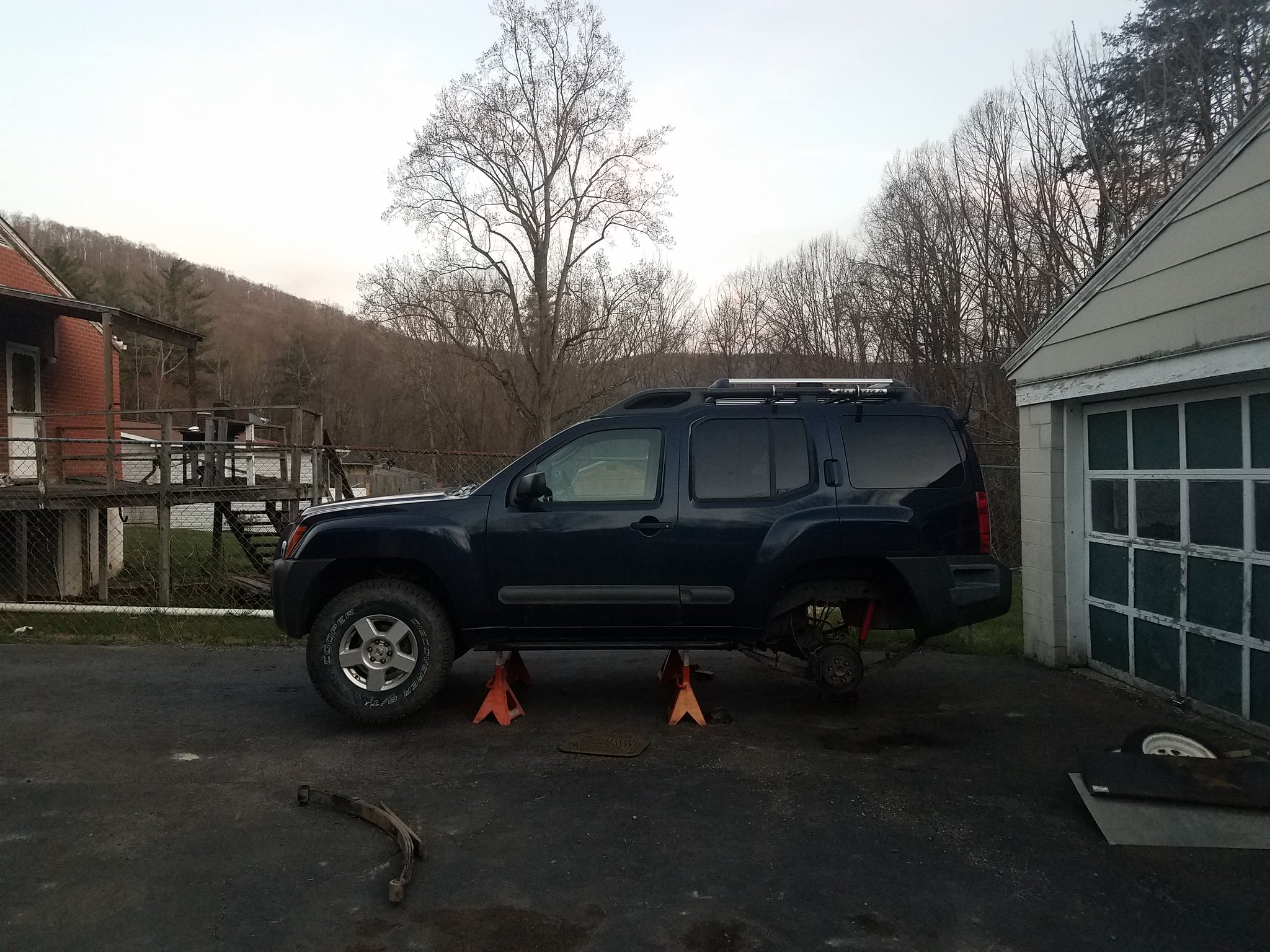 I wish I could just bolt stuff in. Its easier that way.

jekquistk5 said:
I wish I could just bolt stuff in. Its easier that way.
Click to expand...

It is, but not as cool! I just don't have time to fab right now!!