Some of you may be familiar with my yellow K5, the General. It's been several years since I posted anything about it. Just been running trails and not doing much work on it. After owning the former military K5 for 12 years, we've reached the point where any new mods are out of my budget and we need a truck that is more family orientated. Plus the truck is just plain wore out.

We found a good deal on a local '89 crew cab Chevy. The only catch is that it's a 2wd. Here it is on the day we bought it. 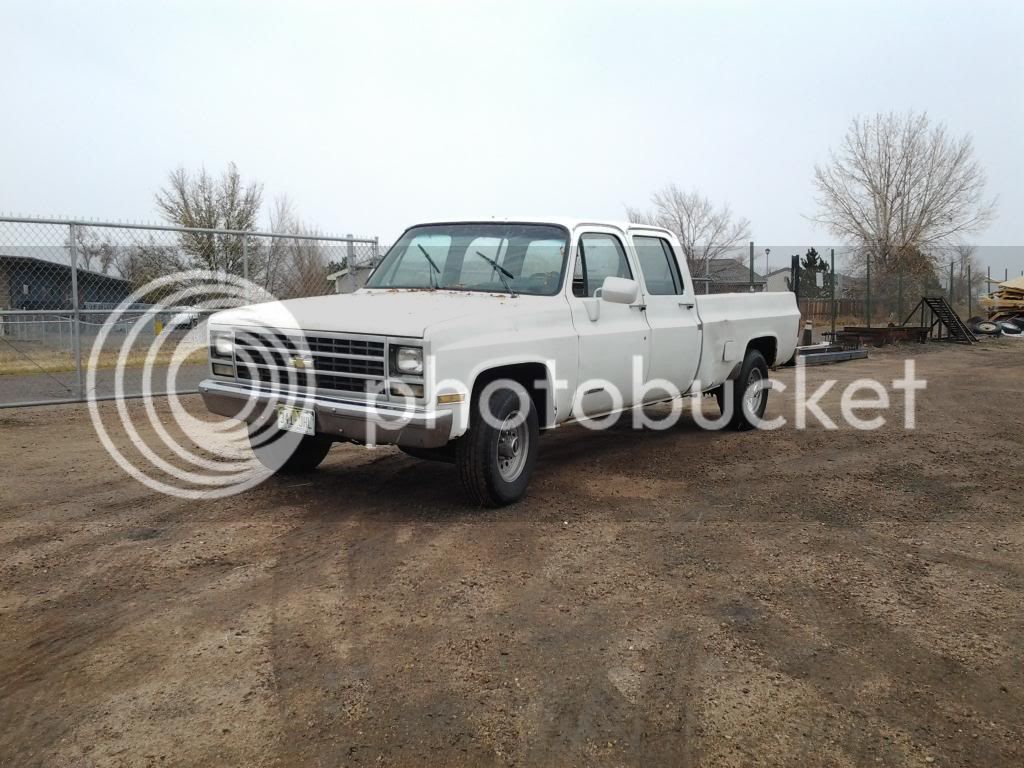 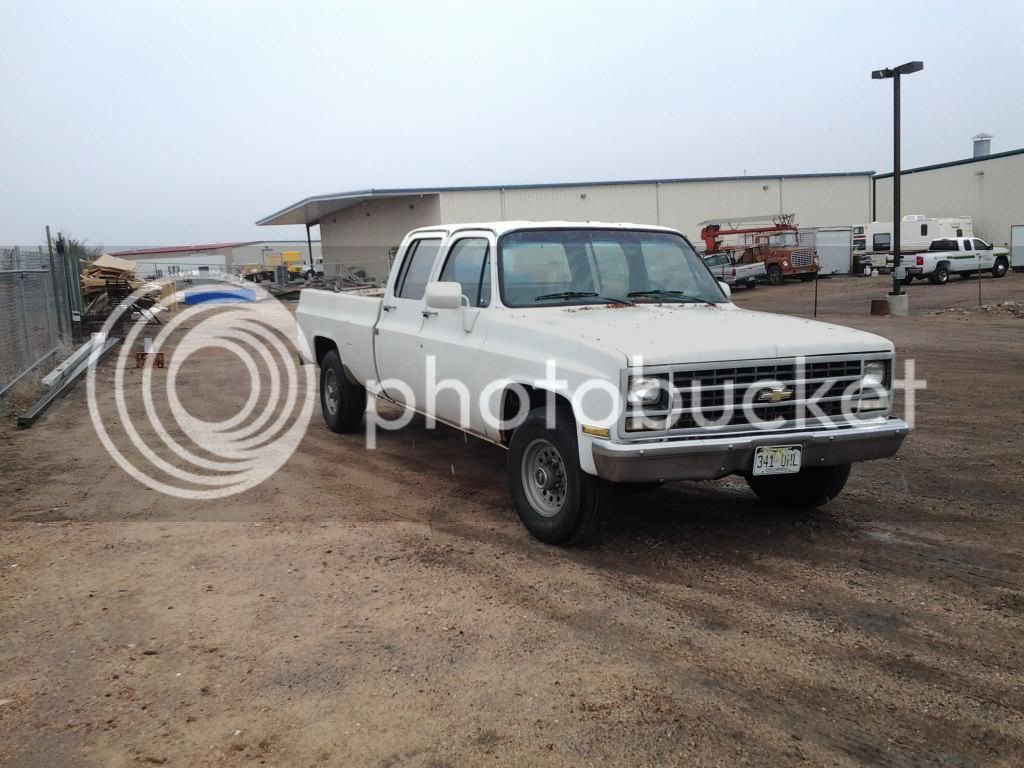 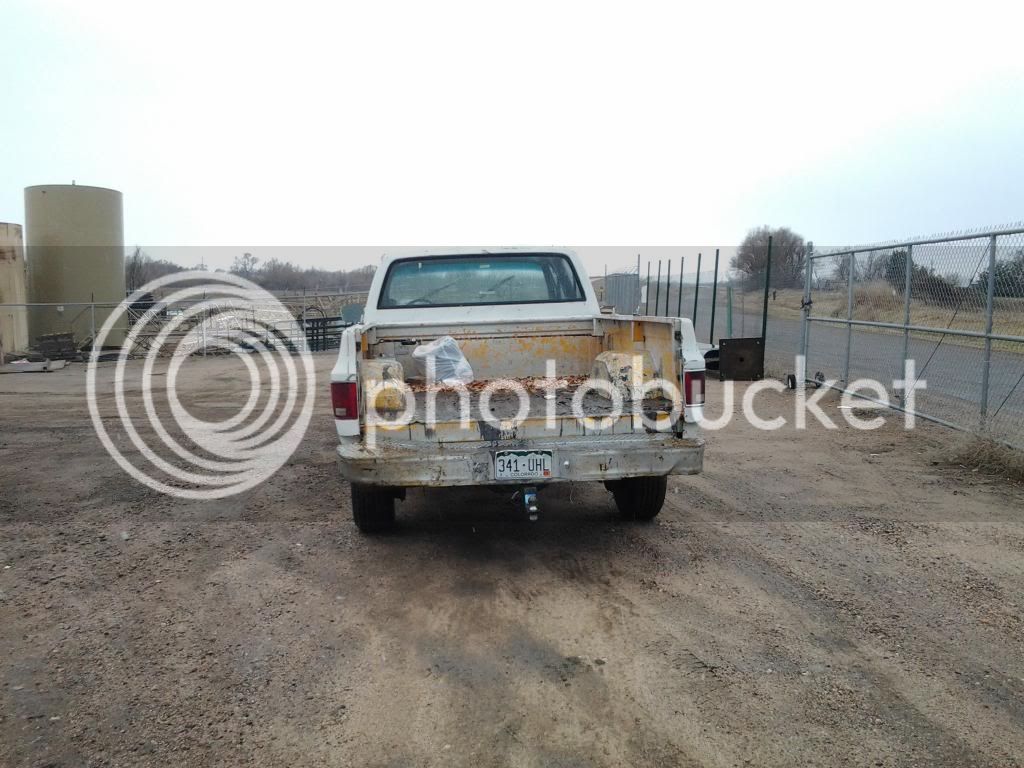 I think this would be the Scottsdale package. Basic TBI350, SM465, and not much else. It was apparently some sort of public service vehicle in the past. The base color is school bus yellow. Some previous owner rattle-canned it white. They painted the interior black, including the dash and door panels. The paint is peeling off the door panels; and every time I close the doors, flakes of paint float off.

I'm also planning to shorten the wheelbase down to a short bed. We really want to have the full pickup functionality because I'm not only replacing the wheelin' rig but also the Super Duty we had. I'm hoping the for level of trail running we'll be doing, a full bed can survive. If nothing else we'll try it out for a while and see what happens. Worse case, I pull off a severely beat up bed and fab up a flat bed. Heck I've never wheeled a truck this long so who knows how it'll go.

The end goal is a decent looking pickup that I can do some moderate wheeling with and pull a lightweight camping trailer. Something that will get the family out in the back woods having fun. Just a truck.

A little summary on the conversion:

I wanted to compile this while it's relatively fresh in my mind.

Things I learned about 2wd to 4wd conversion:

ahhh keep the General, need to have a wheeler

One way or another it had to replaced. I should have put a cage in it a long time ago and now there are too many problems with the body/tub.

I enjoy the build process and I've been wanting to start something new again for a while. This truck will still be something I'll run Golden Spike/Trifecta with. That's going to be my achievement mark with the build.

It makes me sad when someone takes a manual out and puts an automatic in....

kgblazerfive said:
If you want to just say you are jealous of all us that have four doors it would be ok

82355 said:
It makes me sad when someone takes a manual out and puts an automatic in....

What if I put a full-manual valve body in? Would that count?

In keeping with my 'budget' build, I picked up some used tires and wheels.

I really love the looks of the wheels. The seller had them listed for $250 with some wore out BFGs mounted on them. I talked him down to $200.

Turns out they are Robby Gordon Wheels ($300ea new). 17"x8" Yes, they are fake beadlocks. I had beadlocks on the General and really grew to hate them. They leaked and every time I wanted to drive anywhere I had to air up the tires. Mounting and dismounting tires was a huge pain in the ass as well.

I want to run aluminum wheels and I like the fake beadlocks because the rim of the wheel is much sturdier. Running aluminum wheels in the past, I've had trouble tearing up the rim to the point the tire leaked. The button head bolts are removable on this wheel and I plan to use our CNC to make 1/8" aluminum rims I can bolt on to the rim as sacrificial pieces.

I wound up with a 50% used set of Nitto Trail Grapplers. 37"x12.5". I feel this is a better tire size for light towing and just a more affordable tire size.

Man it was hard not to jump to 40" tires. However I'm happy getting these used in a condition that will give me at least 2 years of life. Once they are ready to be replaced I'll be clear of all the 'new' build expenses and have more money to spend on tires. At that point I'll know if I want to stick with 37's or jump to 40's.
Last edited: Dec 19, 2017

This is what I basically envision for the look of the truck:

mrk5 said:
This is what I basically envision for the look of the truck: 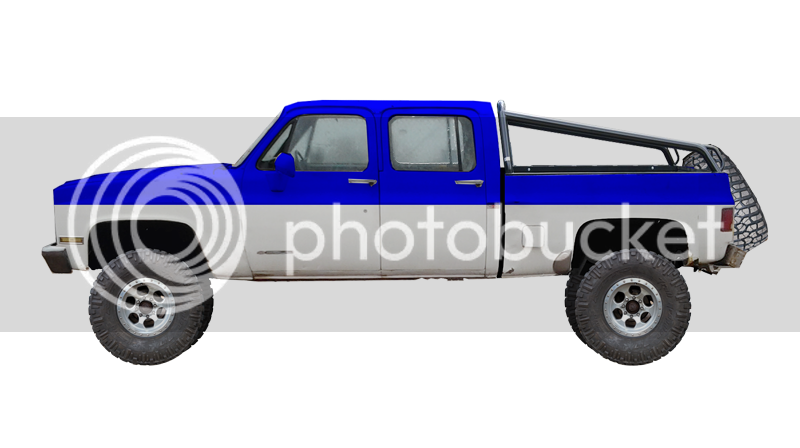 That is a great vision.

I like it!! and if you get the urge to go wheel hard, just fire up the sledge hammer!!

mrk5 said:
What if I put a full-manual valve body in? Would that count?
Click to expand...

It'll still make me quite sad, but I'll reluctantly follow along. Going to sell the hydraulic setup?

I like it... Every time one of you guys post up a new crew cab build I want to kick myself for selling mine... Excited to watch it come to life...

I am selling them but they are 16's. I'm sure you are after 17s for your MTR's. They are factory wheels with Ruffstuff weld-on beadlocks. I actually won the kit from RS 6 years ago here on CK5.

82355 said:
It'll still make me quite sad, but I'll reluctantly follow along. Going to sell the hydraulic setup?

Side story: the "Sledgehammer" 70jimmy mentioned a few posts back is a truck that belongs to a friend of mine and member here. He's a diplomat in the State Dept and while he's off serving our country I'm taking care of his truck. Anyway it has a 465 and as soon as I mentioned it has a hydro clutch, he was all over it like stink on poop.