They didn't ding me for the trailer tire but hit me for a $30 wash cause of the atf on it.. but sense I was a good customer they discounted it $70.


This was my first time renting from them.

I said I was done with it for awhile but I already looked at parts...

I checked all the wheel bearings truck and trailer. Trailer is only one axle. A little boaring.

Everyone should own a forklift. Just in case of stupid.

When did you start drinking Wade?

r3dd0g said:
When did you start drinking Wade?
Click to expand...

Eileen said I looked hung over when I got out of the truck. I am no longer a young man.

Likes to break on the first day

For my final entry, there is a three foot long wire hanging out of the back of the trailer, and the passenger side tail light is out. I think they are related but I can't put my finger on it.

That reminds me. I ran over my winch controller wire and ripped it in half.

Dang it, maybe y'alls trucks are complaining about being beat on. You know, if you'd leave them partially torn down in the shop 24/7 you wouldn't have these problems.

I didn't have any problems. Just challenges to overcome and beat.

I didn’t have any problems either

OK, I'll post all my "pre Blazer Bash" carnage here in case someone missed it in the other threads. I'll start with the journey to Moab...


We left for Moab on Friday 9/3. It started out rough, 3 miles past Cameron, AZ in the middle of the Navajo reservation we threw a tread on the drivers rear inner on the motorhome. I quickly pulled to the side of the road and realized we were dead in the water, the dash was lit up like Christmas and flashing (even with the keys out), we didn't have any 120V from the generator so no air conditioning and we were leaking water. This was at 2PM on Friday before Labor Day with the side of the RV about 6" from the white stripe on the side of the road so I couldn't get in there to troubleshoot without risking my life.

We had a friend come out to pick up the trailer and S-10 (I drug the trailer across the highway with the S-10 and loaded it back on), it took him about 6 hours to get there due to the holiday traffic and a rollover on the I-17 (go figure). He hung out until the tow truck arrived at midnight and traffic had finally died down enough to get a better look at the damage. The light you see here is being shined through the fenderwell, there should be a back to the battery box... 3 hours later he had us hooked up taking us to an RV repair place East of Flagstaff. He mentioned that while he was getting the tire swapped that he noticed that we had torn a bunch of grounds off the battery, turns out the engine ground was tied to the tail lights and that explained the flashing dash (emergency flashers were on and grounding through the ECU!).

He finally dropped us at about 5:05AM, the shop opened at 8 so we quickly went to work to see if we could get the RV mobile again, the shop had mentioned they wouldn't even be able to look at it for at least a couple weeks so our vacation was over if we couldn't get back on the road. About 30 minutes later we were pulling out and heading towards home (we didn't fry the ECU luckily).

I made it to Cordes Lakes and decided we'd probably die if I tried to drive down the I-17 hill into Phoenix if we didn't stop to sleep (up for 26 hours+ at this point) so we pulled into a Love's parking lot and parked by their tire center. Amber ran in and discovered they had 4 tires that would fit! We slept for an undetermined amount of time (honestly, we have no idea how long we were out) and woke up when it got too hot to sleep. They were able to hook us up with 4 tires (all on the rear) and we were rolling out within an hour! 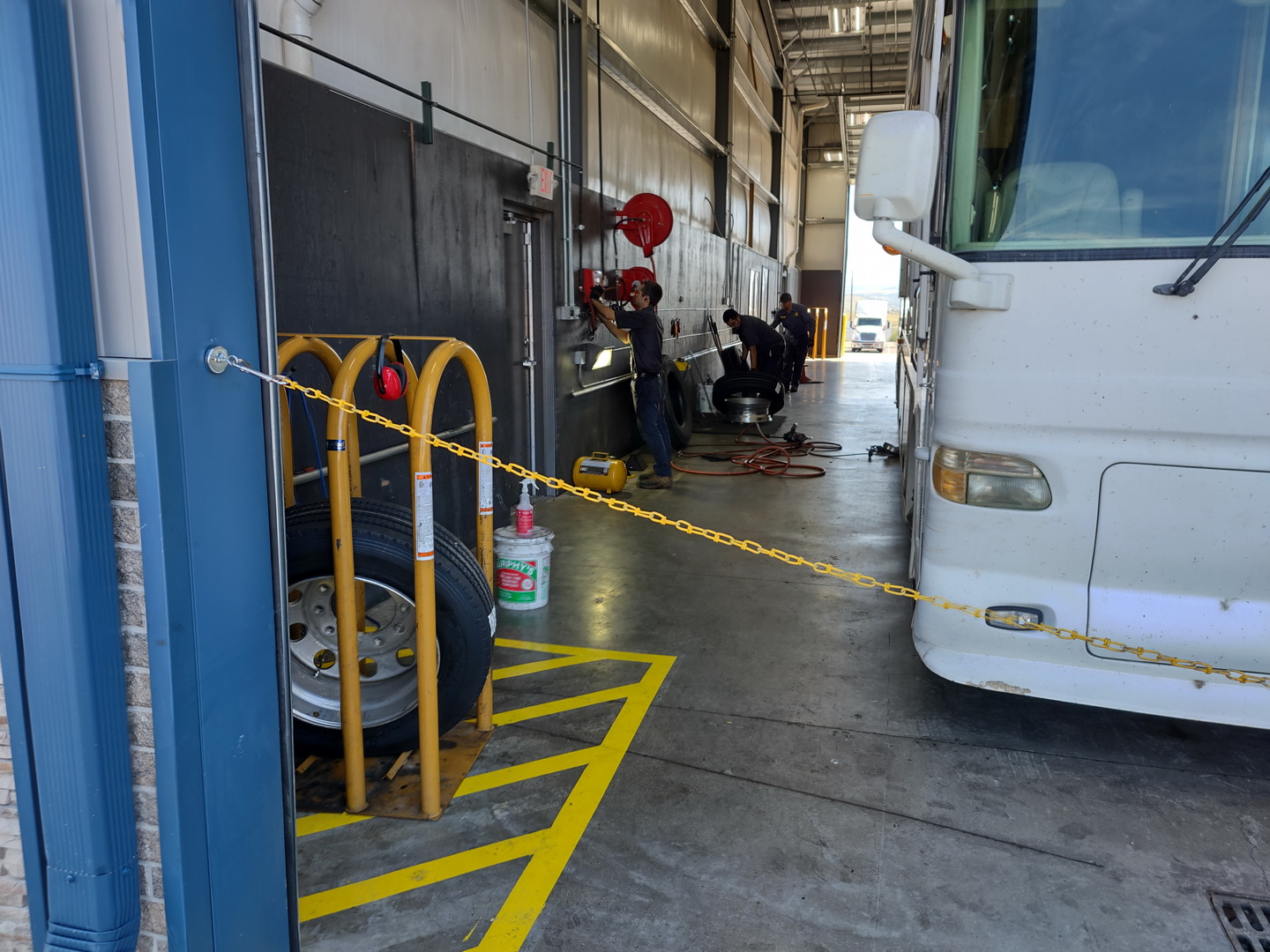 The guy at Love's mentioned that the Chandler Love's had 3 more tires so we headed down the hill straight there. When we got there, we found out that it was going to be a 3 hour wait with no A/C so we decided to head home and get the tires later.

Once we were home, I wanted to get an idea if the 120V electrical and water were fixable or if we had to make alternate plans. I quickly realized that the breaker on the generator itself had tripped and we spent the last 20 hours without A/C for no reason... A quick inspection on the water lines and I thought we could get it fixed so we went out, grabbed some dinner and crashed early for the night.

I woke up at 3AM since my sleep schedule was all screwed up and we headed over to the Chandler Love's, no wait! Unfortunately the overnight guy also said no tires... The guy in Cordes Lakes mentioned that the Tolleson Love's also had 2 tires, unfortunately they didn't have enough people to support a night crew so we headed home to work on fixing up everything else.

We had the Waterline and electrical all buttoned up by 7AM when 1st shift came on and headed to Tolleson, they said it was a 30 minute wait at that point, but at least they had the tires. By the time we got there, the wait was stretched to 3 hours so I crawled into bed and grabbed some sleep. 5 hours later we finally got the other two tires installed and were headed back home at about 2PM. We were hoping to leave when we got back, but decided to head out first thing in the morning. I woke up at 2AM this time and we decided to head out early! When the tire blew it destroyed the inner fender and shredded the insulation, a bunch of this fiberglass got sucked right up into the cooling stack, we had pressure washed and vacuumed what we could out but the the RV still got hot pulling the last hill coming into Moab, we lucked out because we left super early when it was cool. At any rate, we finally made it to Moab on Monday just after lunch! Then on Wednesday we ran Golden Spike with a group. I dropped off a ledge pretty hard onto my radius arms and about a mile later this happened... The 2" .250 wall 4130 Chromo radius arm snapped clean in half (no deformation at all). We got the appropriate "insert" material (1.5" .120 wall DOM) from one of my recovery points/cooler mount hammered it in, welded it and limped off the trail. We dropped the dogs off at the RV and headed over to Dave Hellman's shop to borrow his lift, welder and some angle iron (permanently borrowed that). This was the result (after 4 more days of wheeling). 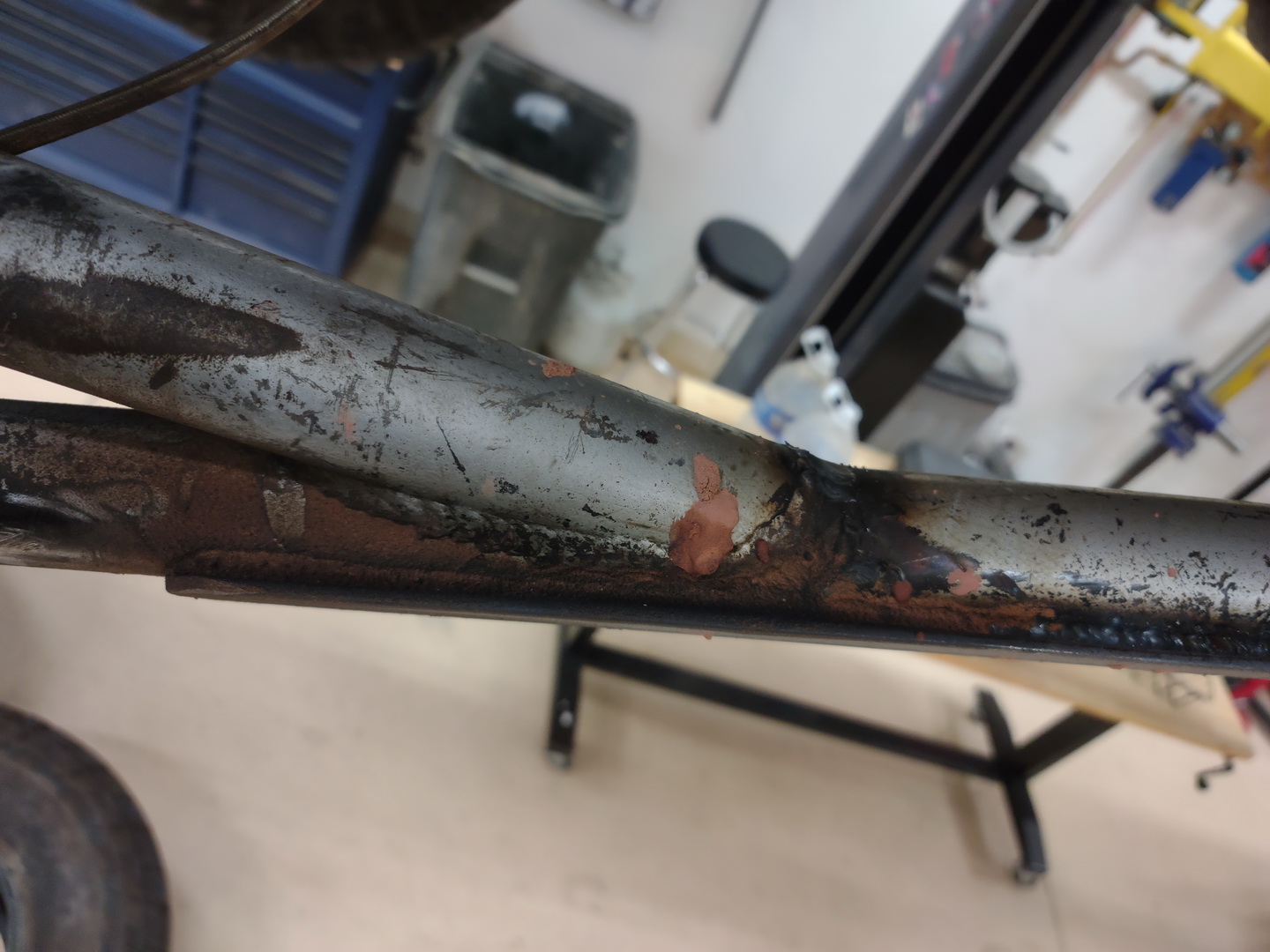 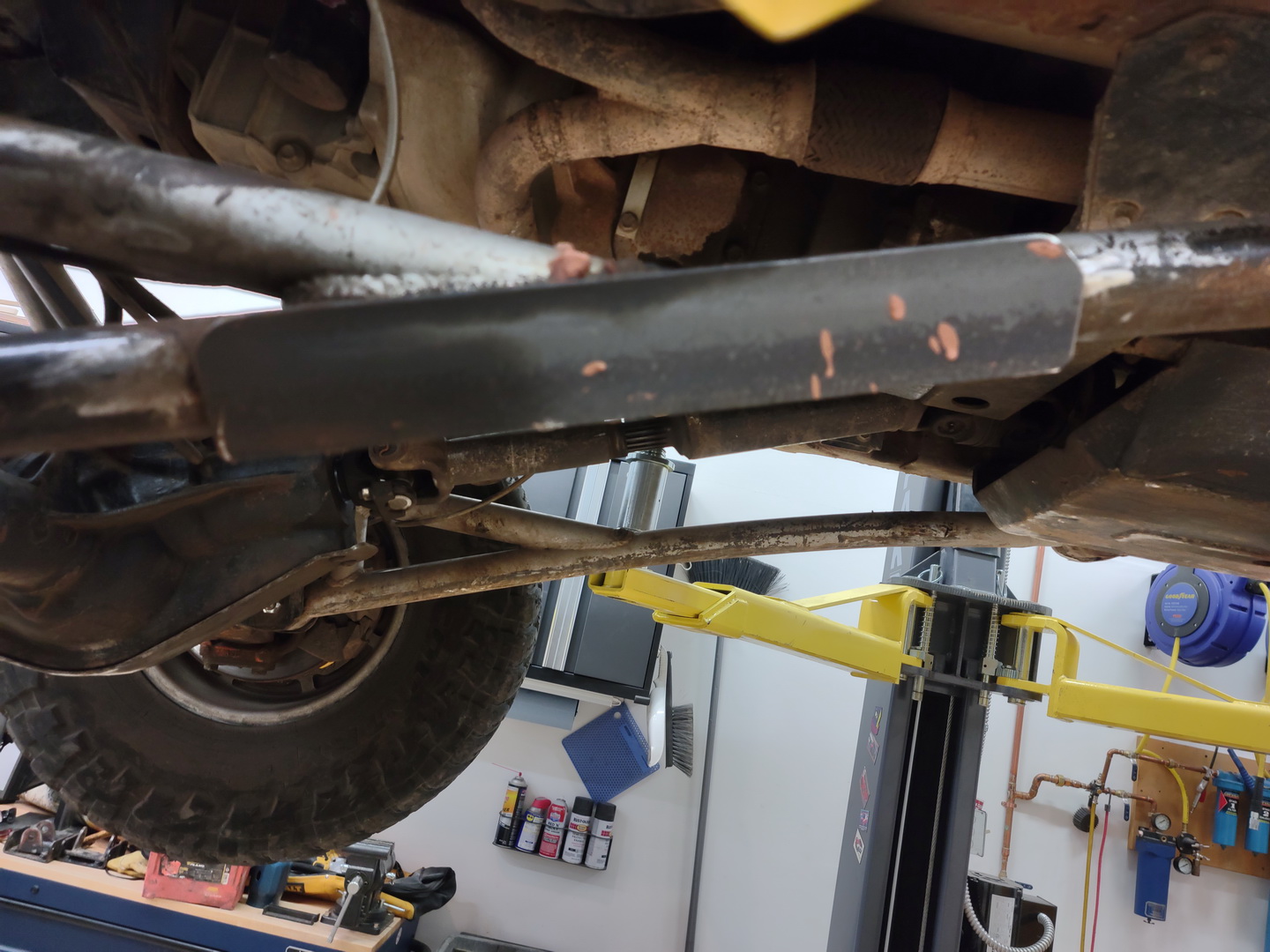 The only other issue we had was getting hot on the way home. Driving in the early morning really made the trip TO Moab nice, driving though AZ in the heat of the day really slowed us down to keep the temps below 225. Hopefully we can get the insulation cleaned out without having to pull the massive radiator or intercooler.

Did you notice your other arm is tweaked?

shady said:
Did you notice your other arm is tweaked?
Click to expand...

LOL, yes they were both quite banana shaped before I showed up in Moab. Chromoly is apparently unobtanium right now, but I did find some 2.25" .375 wall DOM that I'll be picking up today to rebuild these with.

Add fatter bushings to give more play at the axle tube mounts.
Flexing the front axle with bars like yours is actually bending them every time.

May work for a long time that way, but eventually something has to give.

So I'm not the only one that unloaded commando style....

For the record, your Hemi was out running the F250 up the hills leaving Moab...

shady said:
Add fatter bushings to give more play at the axle tube mounts.
Flexing the front axle with bars like yours is actually bending them every time.

May work for a long time that way, but eventually something has to give.
Click to expand...

With the way Brent wheels that, nothing is going to last... I'm pretty sure he has some epic bushings already in it.

shady said:
Add fatter bushings to give more play at the axle tube mounts.
Flexing the front axle with bars like yours is actually bending them every time.

May work for a long time that way, but eventually something has to give.
Click to expand...

It's got 2" bushings in it and they're fairly close together. It flexes fine, the bending is from wheeling and dropping on rocks etc. The tubes were straight for the first few years, it wasn't until I really started beating on it that they bent.

It flexes better than my Silverado that uses the stock ford bushings you were speaking of, so I don't think that's the issue.

I forgot to take a picture of this trail bandaid. Sunday on Flat Iron, right after getting down Tilt-a-Whirl we stopped for lunch. I was sitting under my tailgate for shade and noticed my rear spring plate tipping a bit and it didn’t make sense for a minute. Then I counted the ubolt nuts and it dawned on me, I only had 3. After that I wrapped the springs to the axle as tight as I could and decided to send back to town.

Looks like I missed out on a good wheeling trip, all my carnage was a few weeks before BB