When I was growing up, I had a friend named Walter, who we all knew as Butch. He was NOT a Walter by any means. We got into trouble all the time and he was a scrapper of a kid, rough around the edges, played hockey and was by no means, a big kid. He had heart and was an all around great friend.

When I finally got my K5 Blazer (I've wanted one since the early '80s) in 2004, my three girls were into naming all the cars. I likened the Blazer to my old grade school friend, and the name stuck. "Butch" it was.

I've been thinking about documenting my build thread for some time, but I'm finally getting around to it. Here goes.... This is where it all began.

Here are some pictures of what my K5 looked at when I bought it. Pretty much stock at this point, but did have a 4 inch lift, Auburn 4:56 LS diffs and the interior had been LineX'd 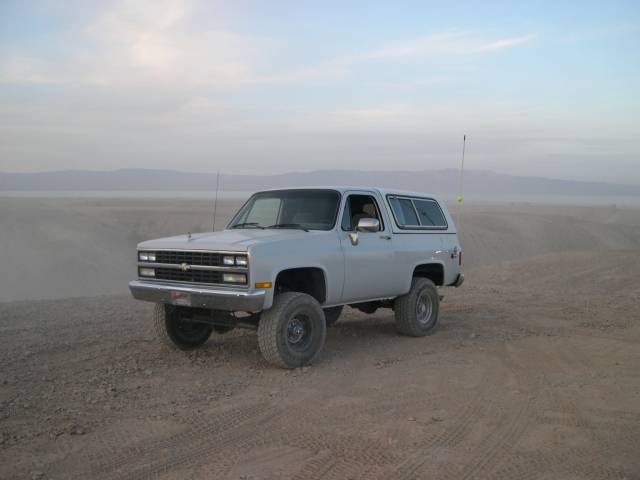 Nice truck! We name ours too!

So, Time went on... We enjoyed our K5 as a recreational vehicle, but I was traveling and working too much to enjoy and really get off road. We did enjoy having the top off in So. Cal. every summer, but it does get hot in the sun. I wanted to get a soft top so I can run the top open, but keep the back shaded for my girlies. Canback had gone out of business and I waited 3 YEARS! for them to start production again. I finally settled for a Softopper and wished I had put this on years before.
November 2013 - Soft Top went on the K5

Mid point, just before adding the soft top, I was considering getting rid of the K5 and getting a jeep. The more I thought of it, I just could not get rid of the K5 as it was the best all around vehicle for me. Off road capable, good on the street, pseudo pick up truck, it could tow small stuff around town, etc.... I decided to start building it out.
February 2014 - Added Rock Sliders from DIY4X

Next... Getting ready to start "USING" the truck. With a Mojave Trail, (Needles to Baker, CA) plan made and wanting to get out in the local mountains once per month, some good kit was needed. I went back to Kert at DIY4X as I really liked the bumpers he offered. I got my bonus and negotiated some improvements with my lovely wife! I might have slipped in a dual battery manager at the same time, while wiring the winch up!
April 2014 - Bumpers
- DIY4X Front UD1 Bumper with winch mount
- DIY 4X Rear Gauntlet Bumper with hitch mount
- Warn 9k winch

Storage ideas... Airline track is AWESOME! One of the best adds I did to the truck for safety and I simply hate stuff rolling around. My first Mojave trail trip was awesome with all the gear loaded in the truck. strapped down and very flexible based on the airline track. I highly recommend it. Here are some examples of use of the airline track with some cool loop bungees I found online. Also, made a removable Jerry can holder base (as I don't have a tire rack yet.)
April 2014 - Airline Track additions
- purchased online: uscargocontrol.com

Using all my new gear... finally! Getting out with friends and family is what it's all about!!! Sedona, AZ, Big Bear, CA, Mojave Trail, CA, Adelanto, CA, Tierra del Sol and Cleghorn Road. Getting some use, oh yea, upgraded to some 35s from the 33s in December 2014

BTW, next time you run the Mojave Trail, let me know, I'd like to tag along! You go from what, about Zzyzx Road all the way through?

Looking to improve that ride quality, and eliminate that classic K5 sag... I got myself an ORD shackle flip. Not a huge set like most, but it's what I wanted and worked perfectly. I removed a stiff Rancho add-a-leaf, put on a 2.5 inch bracket with 4.5 inch super shackles from ORD and netted about 4 inches of lift in the rear. I also added ORD zero rate leafs in the front to re-level the front end as I went up too much int he back. After some pinion angle adjustments, I was on my way. Drives very nice, better flex and really comfortable.
May 2015 - Shackle flip and the shake down trip with Camie, my youngest daughter.

Phil513 said:
BTW, next time you run the Mojave Trail, let me know, I'd like to tag along! You go from what, about Zzyzx Road all the way through?
Click to expand...

Hey there. First weekend of December annual trip now. We spend the night at the Avi Casino and start Friday morning. Go to Razor road or all the way. Put it on the calendar!

cesandvik said:
Hey there. First weekend of December annual trip now. We spend the night at the Avi Casino and start Friday morning. Go to Razor road or all the way. Put it on the calendar!
Click to expand...

Thanks dude, I have it written down! I'll be there.

Adding 2015 Suburban Third Row Seats - Made some brackets which bolt into the factory front holes and used a donor back seat bracket to click into the floor. These sit a bit high, but work pretty good. When I do a cage, I will need to do something different as the seats are too high and need to sit in the floor, rather than above the floor. I also boxed the rear bracket for additional strength before powder coating them both. Much safer with the shoulder belts in the back!

Well, the seats worked out well, but the 35 inch tire does not allow for the new seats to go up! Can you say SCOPE CREEP!? I'll be building a tire rack/swing gate in the future, but in the short term, I want to make more room for camping gear and use of the back seats. So, a rack it is!
May 2015 poor man's safari rack with soft top...

I've recently leaned welding and bought a welder. I'm no professional, but I love having the skill. Been playing with many different projects and one of the small projects for practice was a bolt on light bar for my bumper. I had a friend with a pile of scrap DOM from a project and he bent it up for me. Some brackets welded on and viola! A nice little light bar.
December 2015 - Poor Man's light bar

So, I've just completed my latest project I was planning for about a year - Cross Over Steering. Saving $$ and collecting parts. This was the largest project I took on by myself on the truck and I was a bit nervous, but learned much from different online friends and the CK5.com forums. I guess in hind site, it was just a bunch of little projects strung together, but my family was a bit concerned when they saw the entire front axle, springs and steering box out of the truck and in a hundred pieces. it all went back together and while it drives "different" it is much better!!!
May 2016 - Cross Over Steering Project
Steering box, Before and After

Wheel Hub, Before and After