So I've been asked, err harassed to start a build thread on my 91 K5 here. I haven't hung out much here in a while, but maintained a lurker status checking up on my friend you all know as Dirty Larry.

Larry and I have known each other since our College days going on 20 odd years now. He found my first 75 K5 and he found the 91 K5 too. I'll spare the gory details if you want to go back to the beginning with my '75 you can check out it here on the 67-72 Chevy truck page: http://67-72chevytrucks.com/vboard/showthread.php?t=609848

I'll pick up the story here where the 91 gets going. So here comes the mother of all first posts to get you all caught up.

From March of 2014:
So the parts collection is moving right along when I got a text at work. It was Larry:

Do you have a flywheel yet?

Me: No, but I was going to order one in the next couple of days.

Larry: How would you like an auto with OD instead? Specifically a OD in a 91 K5 body?

Me: Damn you Larry!

The conversation bounced back and forth but after some thought, I came to the realization that the rust in the 75 is more than it's worth to deal with in my case. Larry had been making that point for a while now, but sentimental nitwit in me chose to ignore it. Larry's had a 91 K5 stashed away for a little while and it's solid. The truck is minus an engine, but that's ok we have a solution for that. So I told Larry I'll go for it.

I'm sad to see the 75 to go, but the bones will live on as they say. The plan is to sell the front clip I was going to swap on, swap the axles and lift, pull the drivetrain and sell or crush the rest. Unless some nut really really wants the full top and windshield header to convert another, it's more likely to get munched.

By having another shell to work with, the 5.3 swap will be a bit easier. The auto while not my first choice to play off road, will be easier to set up the programming on the 5.3. As Larry said we won't know if it shells or not, but if it does a nv4500 swap won't be too hard to do. I'll be able to still drive the 75 for a little while until the lift/axle swap commences

I got to throw out a huge thanks to Larry for thinking of me and making the 91 available for me to buy. We have some prep work to do for sure as a couple of hack's had this before Larry found it. The only rust this one has is a small amount on the floor that will be easily fixed. Cool thing...
Click to expand...

Read more about this build here...

This page is the onset of the 5.3L install

Very cool of you to take the time to move this over to our site!

Subscribed! Thanks for sharing over here as well! I know a lot of folks will get a lot of enjoyment seeing this come together!

Looking forward to seeing this in the future. Dang I should have parked mine in his yard to see what magic he could do with it when I lived there.

Adventure is out there!

Thanks for the interest all. I'm lucky to have known Larry as long as I have. Not many would put up with my antics. Having lent a hand on his builds when he needed it and know the high level he shoots for is exciting for me. The fact that he's doing this in his garage and pouring so much of his own time and sweat into it is so humbling. To that fact his wife is up for sainthood putting up with this project. Icing on the cake is his daughter thinks I live in the garage because that's where she always sees me when I drop parts off after I leave work. She's a cutie, but the apple didn't fall far from the tree. She had her hood up working on the engine of her power wheels jeep Saturday when I was over there.

As a matter of fact, Larry's just as excited about this build as I am. Usually if we need to coordinate anything during business hours we text, get it straight and I'll call on the way out of the shop. Nope not today. He pulled the rear seat and rubber floor mat out of the rear to discover a mint, pristine rear floor. He had to call me. The entire rear cargo area where you all know rot out at the rear sill and back is spotless. Not one pit of rust. Paint is perfect except for one spot in the middle where it looks like the muffler looked like it got hot and scorched the paint.

Plan for today was lift the top off and get the beast inside the shop finally! Big Day! Larry had the top unbolted before I got there so after a frosty one we popped the the lid off and set it next to the shop. We then went into action to move the truck with Larry's trusty Craftsman lawn tractor. So with me sitting on a 5 gallon bucket he yanked it forward to the driveway. I darn near fell off the bucket when I ran over the chain. We fixed that and pulled it backwards up the driveway with me just sitting on the floor now. I got to say that little tractor barked and squeeled the tires most of the way up the driveway, but it did it. It is inside the shop now and I got to "drive" it for the first time! 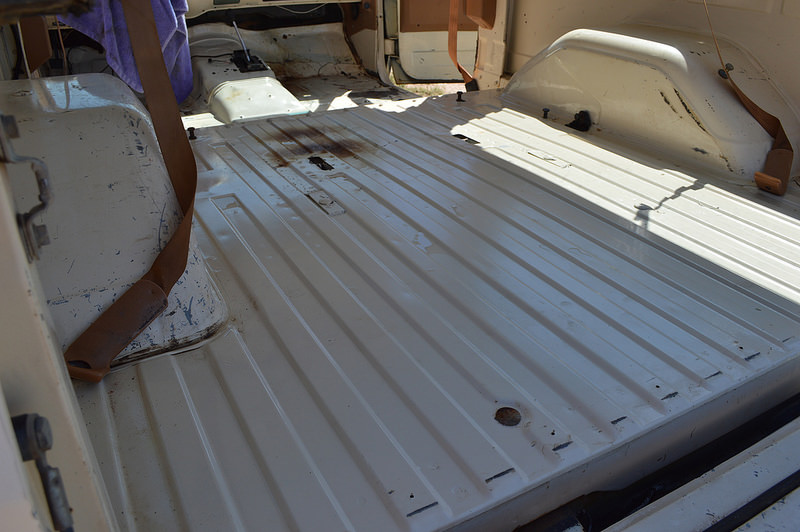 We hatched a couple of more plans and called it a night.
Last edited: Jul 8, 2017

No rust is always cool!

y5mgisi said:
No rust is always cool!
Click to expand...

It is quite hilarious when my daughter says she wants to go see Robby and heads towards the garage. She totally thinks he lives in there

Yeah, I am excited for this K5 project. Maybe a little jealous too! Rob deserves a nice off-roadster for a change. Hell, I wouldn’t let him go with us on our annual Desert Trip as the ’75 K5 was such a piece of

where we didn’t trust it! This rig will turn out nice and built for the long haul in mind.

Man, I love bare bones rigs like this base model K5 because they are cleaner and there is so much less BS to deal with to try to restore. For Rob’s sake, I wish it did have A/C though. I am just tweetered as hell as to how clean this tub is. Great bones to start a project on!

Clean tube! Odd burn mark on the floor where the muffler once sat below 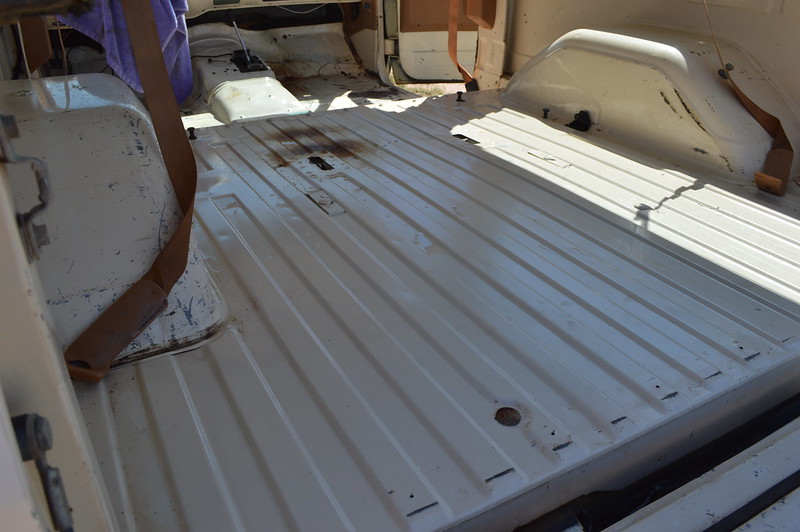 Not one speck of rust in the usual spots! 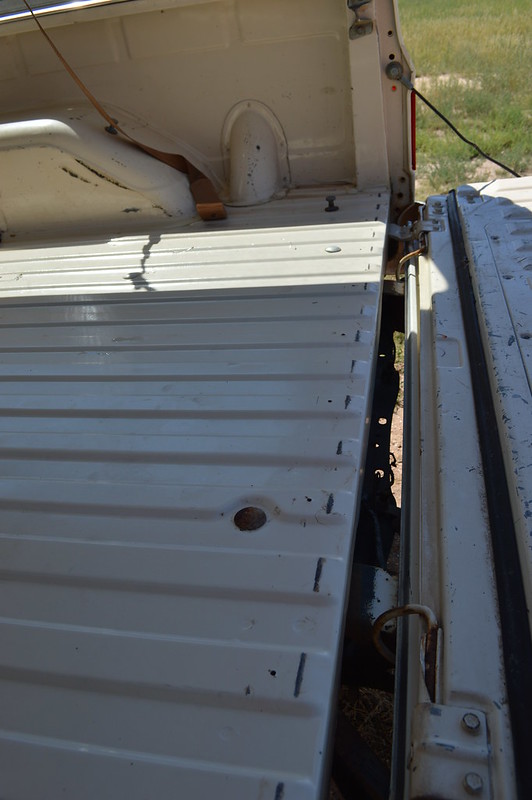 Everything got a major douche 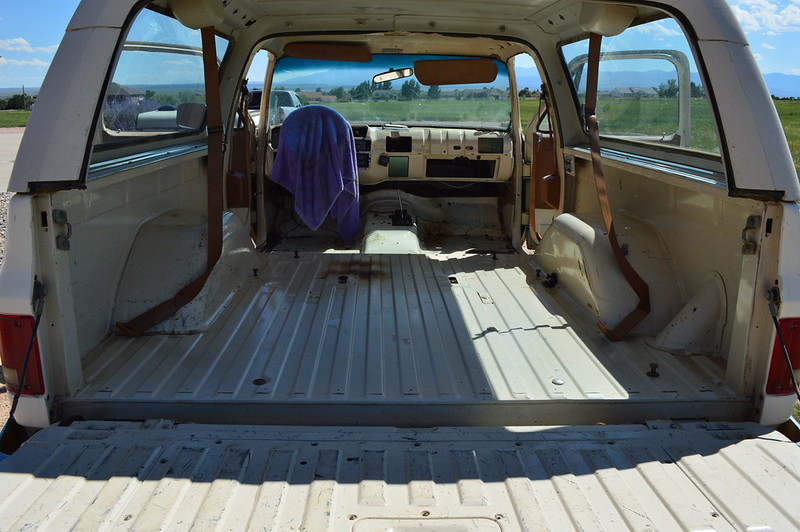 Little bit of surface rust on the driver side floor board. Cleaned it up with a spot blaster and will treat with POR 15. Not nearly bad enough to cut out. 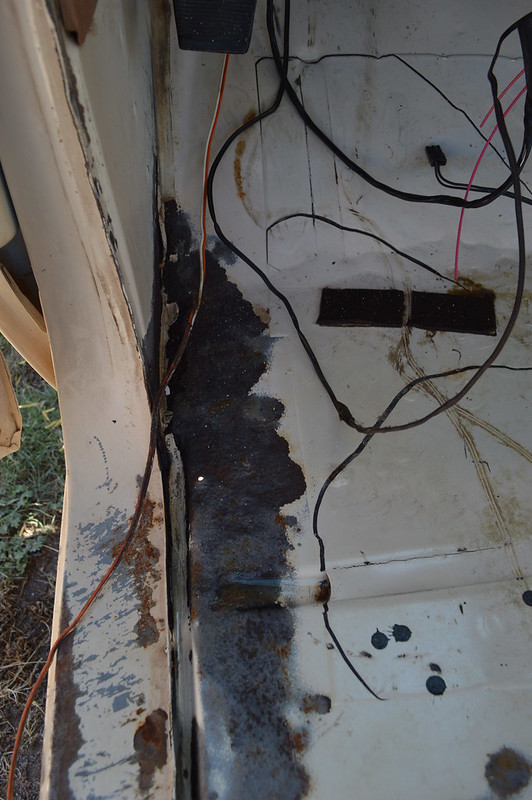 Squirreled away in the corner waiting for things to happen. Figures, I have two weeks of work travel so it will be sitting for a bit before things get exciting. 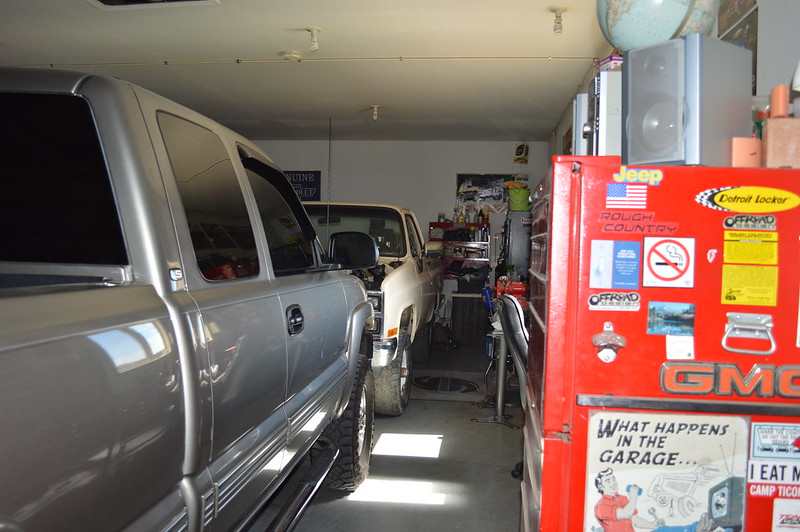 Thanks for posting over here.

Have you contemplated adding AC to it?

That is a damn nice tub to start with.

Looking forward to the updates.

I wish my tail-pan and tail light areas were like those, awesome progress. subscribed!

Have you contemplated adding AC to it?

Thanks for the interest. Adding a/c may be in the plans down the road. Current goal is to get the engine in/running, lift and axles installed. Get it rolling down the road. If I do a desert run with the boys I know I'll be sweating like pig. So at some point it might get an aftermarket system like from vintage air or another source.

I was pretty startled at the condition. Giving it a nice coating of Raptor liner, baked on in our booth at work will keep it nice for the future.

Yeah, that floor pan in nice.

Is that the rig Lawrence was advertising at one point?

Is that the rig Lawrence was advertising at one point?

I'm pretty sure it's not. Larry found this on craigslist a couple years back and was holding it for a project later.

So with Larry heading on the road for work, I've taken to some smaller tasks. I stopped by the Bigassgas garage and picked up my instrument clusters from the 91 and 75. The 91 is in need of a good cleaning.

My initial thought was to install the factory tach and small fuel gauge in the 91 cluster, but that's been thwarted on a couple of counts. First reason is the LS swap, the pulse generated for the tach signal is not correct for the factory tach. Larry's experience with the engine control module we are using here found he had to run his aftermarket tach in 4cyl mode to read correctly. Second reason as you'll see shortly is the spot where the small fuel gauge would go is split up in three sections for additional indicators. Gauge won't fit without work. This cluster is too nice to butcher. 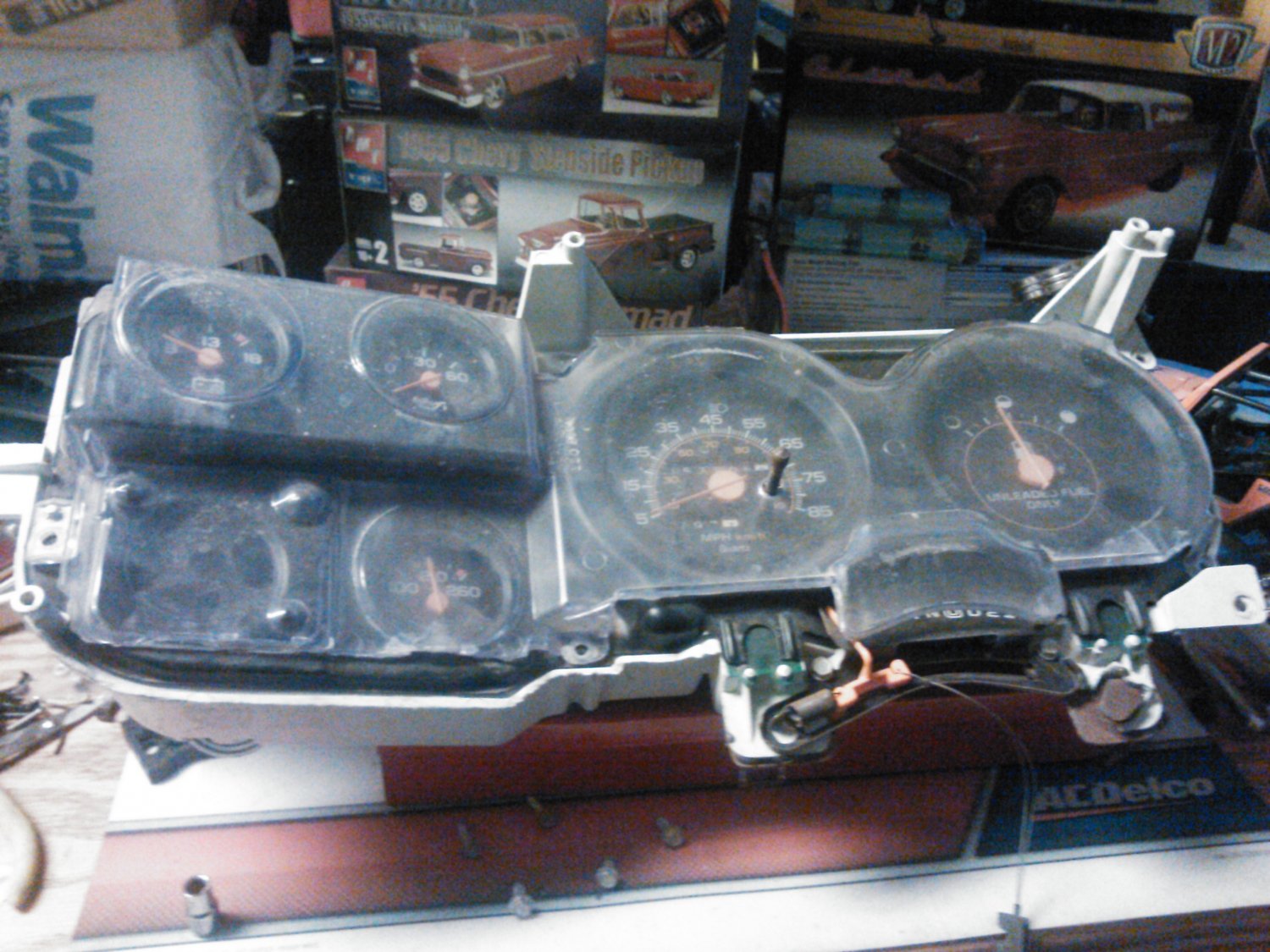 It's dirty for sure. Larry's sand even made it's way in here from blasting. It's coming apart to get down to the housing so I can shoot it with a better reflective color to use with LED bulbs. 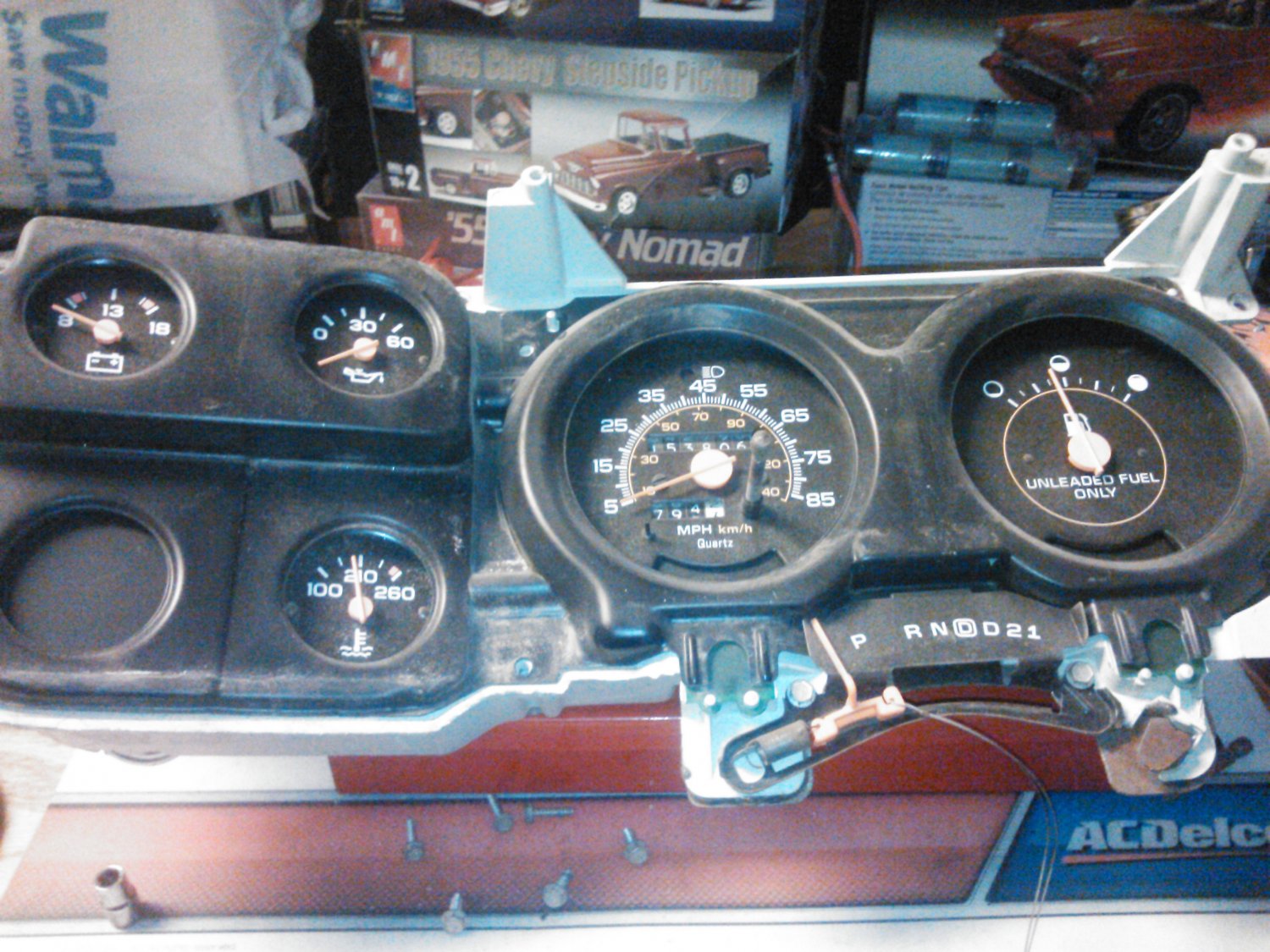 Last mileage reading. Going back to zero since we are starting fresh here. 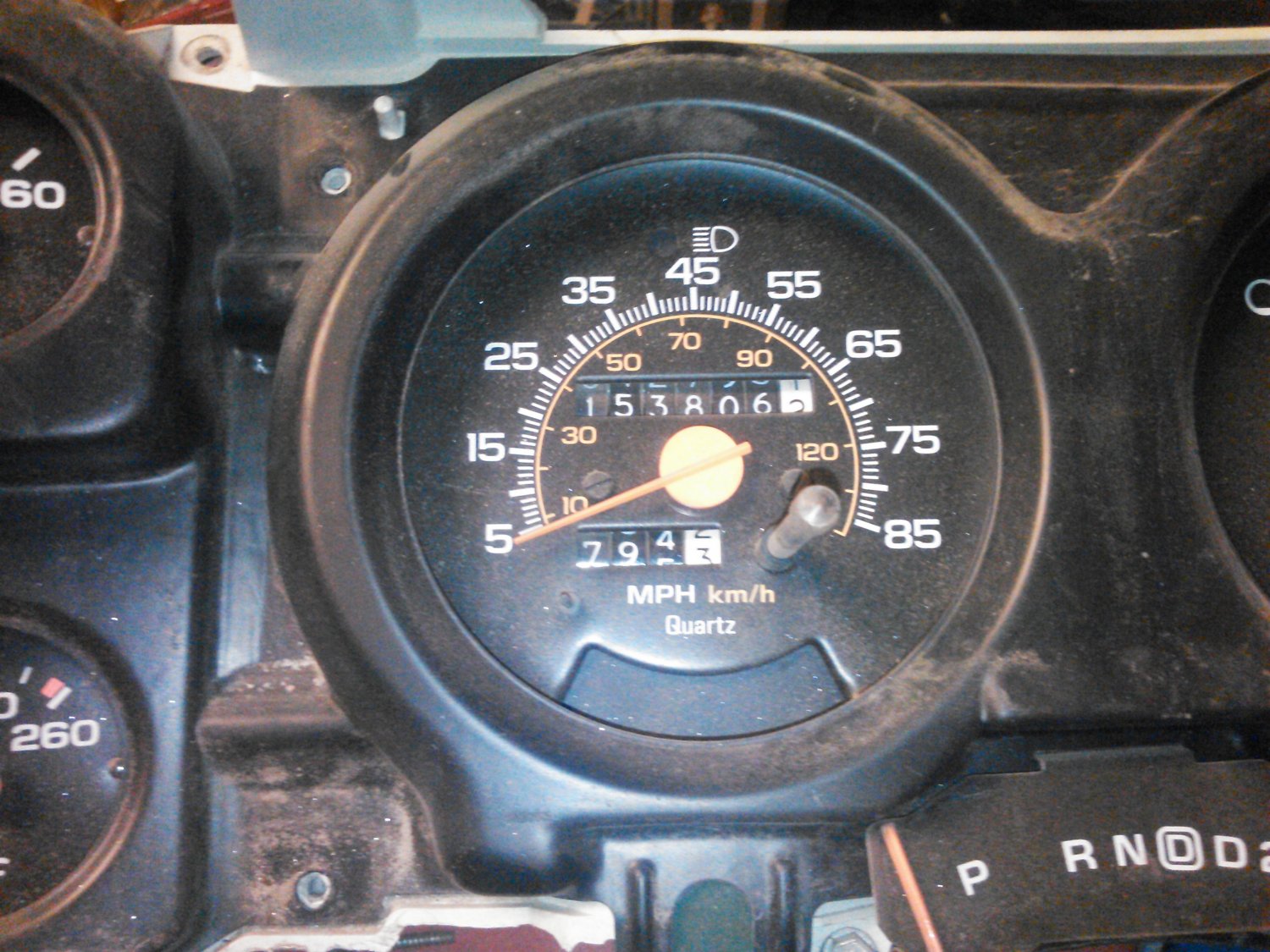 The spot for the battery indicator where a small fuel gauge or clock would go. Backside. Not sure how many have seen an electric speedo version of this cluster. It's my first. The printed circuit is good though. No cracks. The rest of the gauges. Just need cleaned up a bit. 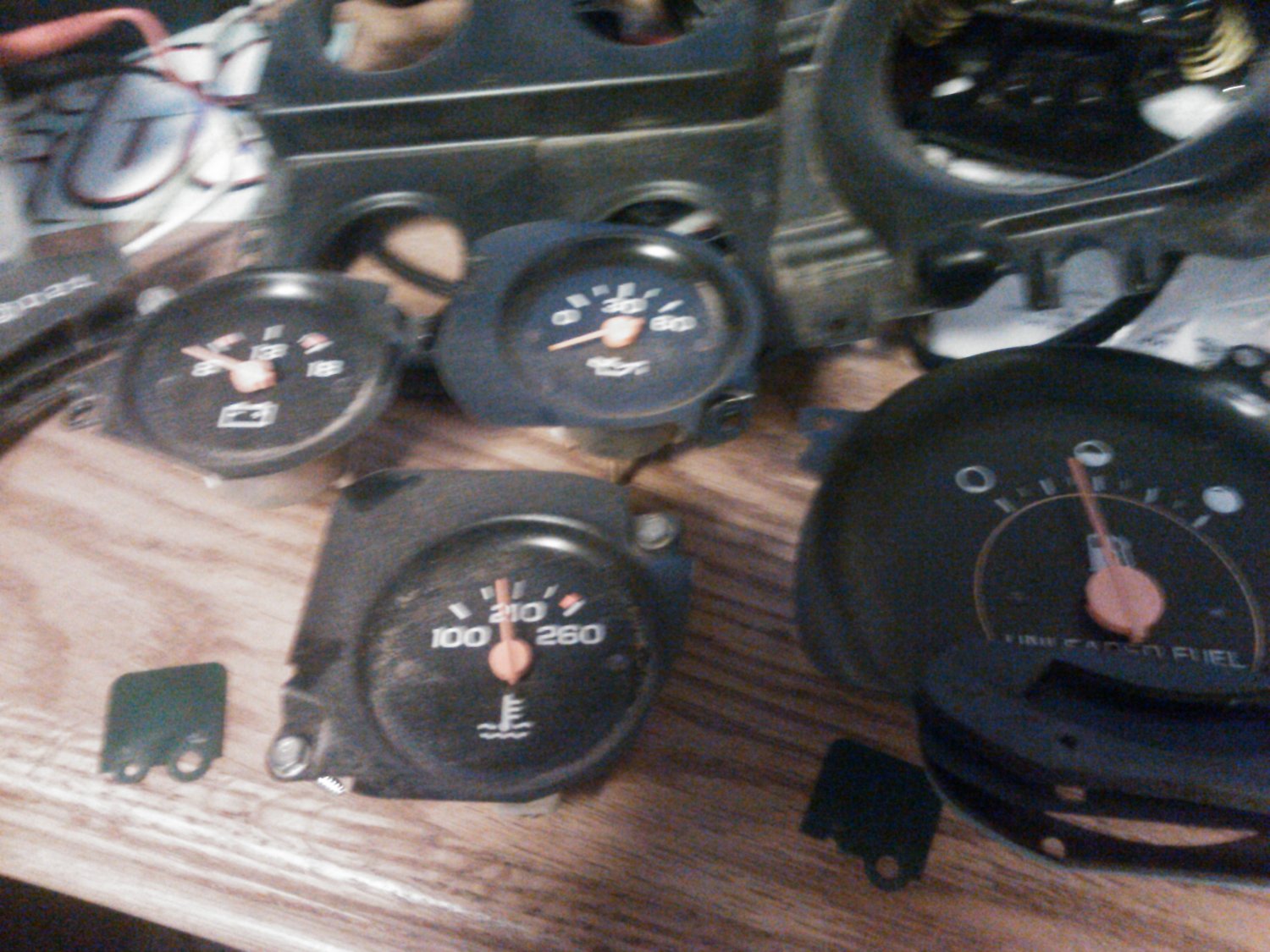 The bare housing. Yellow spots on the blue are heat discolored from the light bulbs. No problem, LEDs won't be so hot when installed. This next shot shows somebody's idea for a fix to the shift indicator. A metal plate has been epoxied on to the back side of the housing with a guide for the cable to ride over when the shift lever is pulled. I can only assume the original guide was part of the plastic housing that probably broke easy and this was the fix for it. 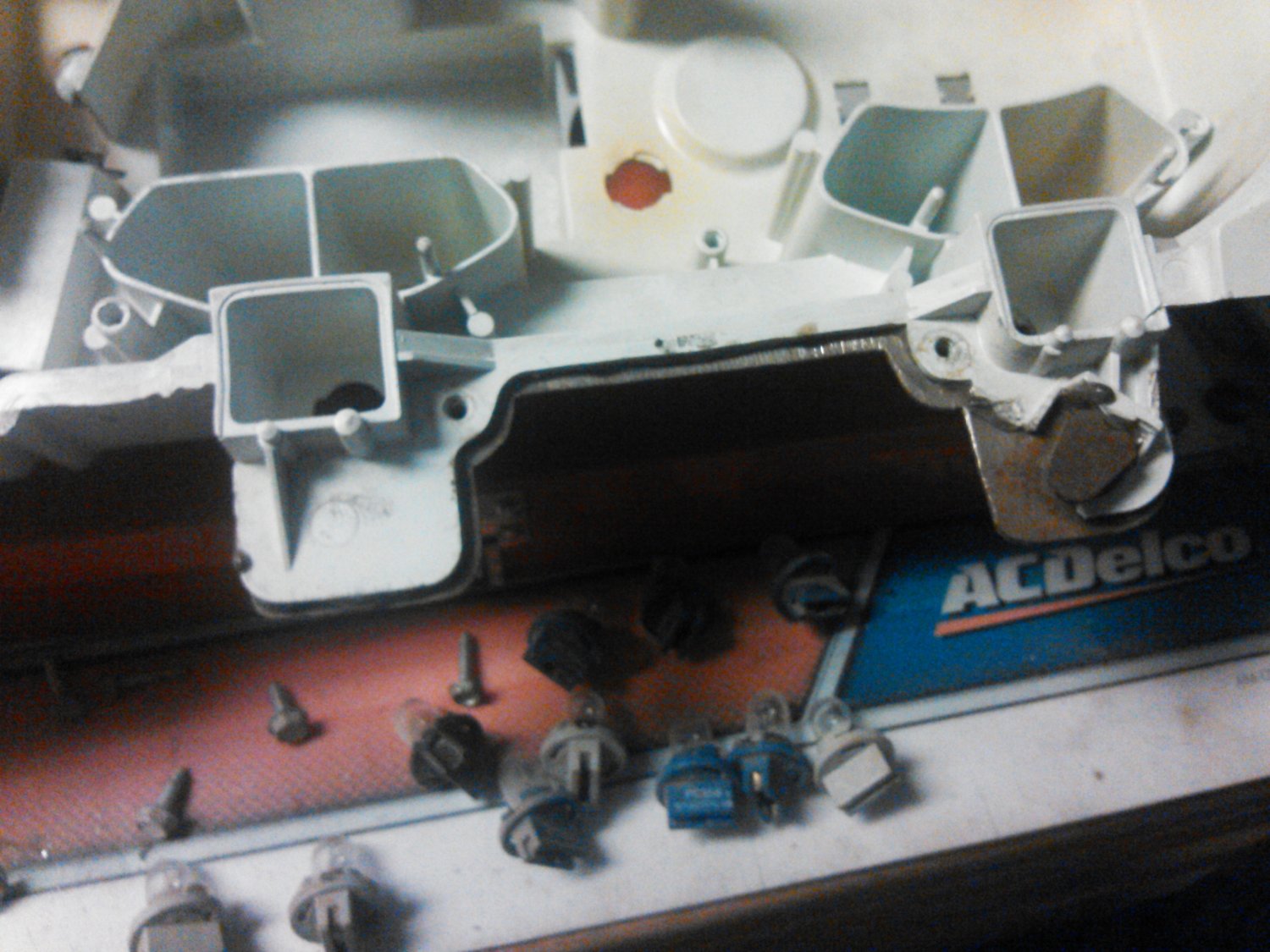 Backside of the plate. It has holes that slid over the existing posts but it was glued in as well. Kinda Crude, but it works. The Odometer now back to zero to show the start of a new chapter with this K5. 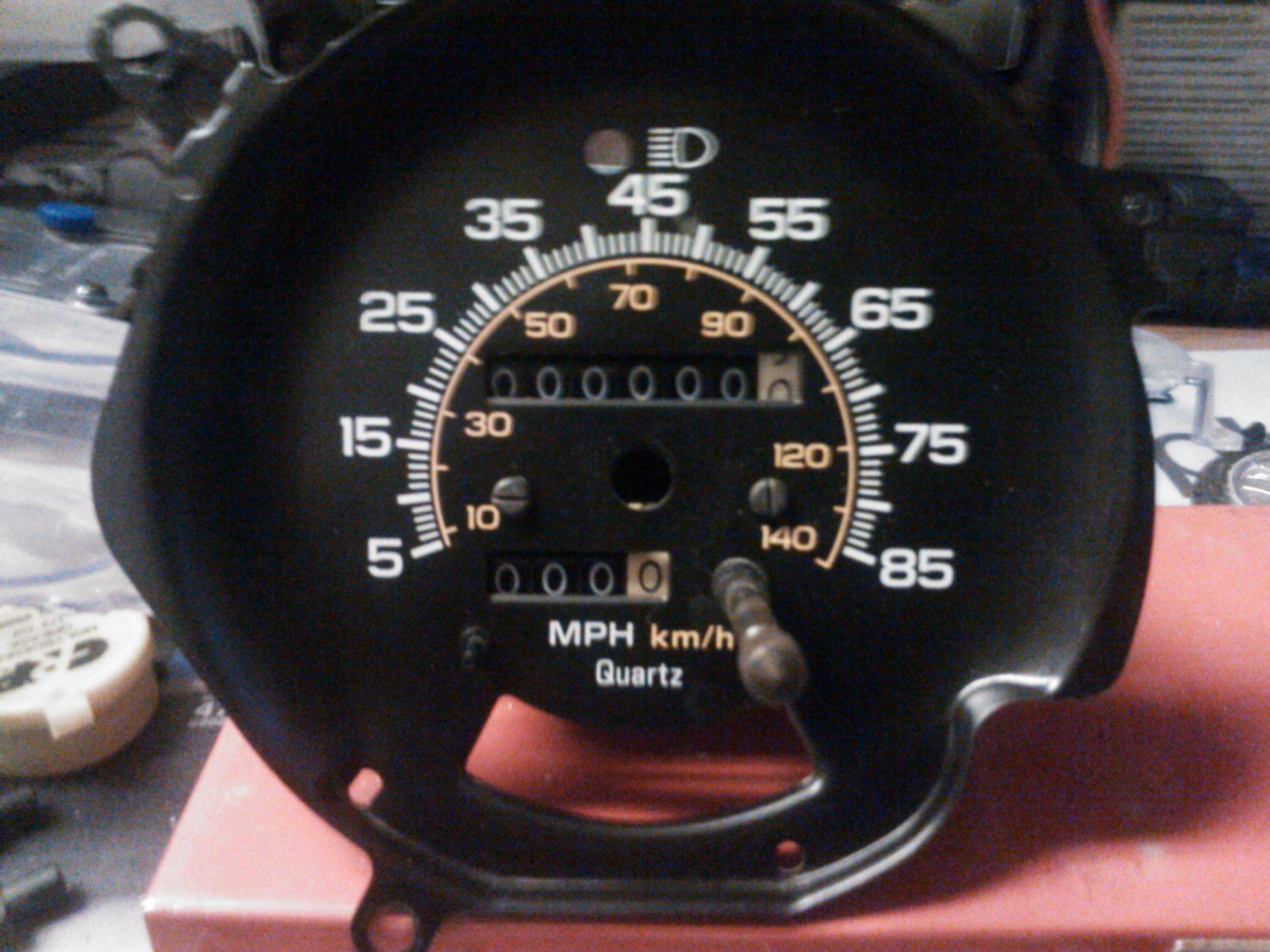 Sell your factory tach and buy this?

You could see if they have an adjustable tach setup?